LGBTQ candidates once again made history in terms of the overall number elected to Congress and state legislatures across the country. However, many of them had to contend with homophobic and transphobic attack ads this election cycle.

“There is little doubt that millions of dollars in homophobic and transphobic attacks ads devastated our candidates in key swing districts during the final weeks of their campaigns,” said Annise Parker, president of the LGBTQ Victory Fund, which trains and advocates for queer candidates at all levels of government. “Bigoted politicians and operatives who thrive in the politics of hate were able to peel away support from voters who don’t yet know our community.”

Bigoted ads did not spell defeat for all LGBTQ candidates they targeted, but even the candidates who overcame the attacks did have to invest resources to respond to them.

When it comes to homophobic and transphobic political attacks, “it is hard to quantify the effects,” according to Gabriele Magni, an assistant professor of political science at Loyola Marymount University in Los Angeles.

He also explained that “voter suppression efforts that target constituents that are generally most supportive of Democratic candidates,” also hurt LGBTQ candidates, as the lion’s share of them run as Democrats (at least 90 percent, according to LGBTQ Victory Fund’s estimate).

Whether a candidate won or lost may not be indicative of the impact of the bigoted attacks either, as Magni said the bar tends to be higher for LGBTQ candidates who make it to the general election, so “the exceptional quality of some of these candidates allowed them to overcome the negative effects of some of these attacks.”

Homophobic and transphobic attacks produced mixed impacts on congressional races, with nonincumbents and those in purple districts most likely to suffer defeat.

In New Hampshire, Democrat Chris Pappas — who in 2018 became the first openly gay man to represent the state in Congress — was able to stave off what supporters called homophobic challenges to his integrity to win re-election against Republican challenger Matt Mowers.

During a debate Oct, 21, Mowers brought up Pappas’ alleged relationship with a lobbyist and accused the candidate of impropriety. Pappas denied the claim, and in a statement after the debate, he said Mowers’ behavior was “despicable” and that he had “crossed a line.”

“Matt Mowers learned the hard way that his desperate homophobic dog whistle attacks cost him votes amongst Republicans and independent voters in the closing days of the campaign,” Lucas Meyer, campaign manager for Pappas, said in an email to NBC News after his election victory. “Granite Staters saw right through his baseless attacks and rejected his blatant bigotry that he made the focus of his closing message.”

While Pappas was in a purple district, which President Donald Trump carried in 2016, he had the advantage of incumbency this year. “Homophobic attacks are less effective against well-known candidates, because voters already know them,” Magni said.

Two races for which LGBTQ advocates and Democrats had high hopes — Gina Ortiz Jones and John Hoadley — did not pan out.

Hoadley lost against incumbent Republican Rep. Fred Upton, who voted against the Equality Act last year and for a constitutional amendment banning same-sex marriage in 2004 and 2006.

The National Republican Congressional Committee (NRCC) spent millions of dollars on attack ads against both of these candidates.

“If you are running for congress as a nonincumbent,” Magni said, “not so many people know who they are.” This means that voters may “rely more heavily on stereotypes or homophobic tropes,” especially in the context of Covid-19 in which personal contact is even more limited.

By contrast, derogatory comments directed at Rep.-elect Ritchie Torres did not harm his chances of becoming the first Afro-Latinx LGBTQ person elected to Congress. He easily won the general election for his congressional seat against his Republican opponent in one of the most progressive districts in the country. Magni said the attacks are “less consequential” in heavily Democratic districts like New York’s 15th.

Magni explained that the diverse candidate pool, with many women, people of color and transgender candidates are “especially vulnerable targets” for anti-LGBTQ messaging.

Jenna Wadsworth, an outspoken progressive, lost her bid for North Carolina’s agriculture commissioner. In October, Wadsworth became the target of online vitriol after she posted a video asking viewers if Donald Trump’s diagnosis with Covid-19 was their “favorite or most favorite October surprise.”

Wadsworth, who described animosity toward her prior to the video as “minimal,” quickly became inundated with thousands of messages on social media.

Many of the hateful messages, however, were not about Wadsworth’s controversial remarks about Trump’s health — they were about her being unfit for office because of her sexual orientation, gender identity and sex.

“That does a lot to you emotionally, psychologically. It’s very draining,” she said.

Some of the messages made Wadsworth fear for her physical safety. “I received gang rape threats after that video,” Wadsworth said. “Until election night, I was not able to stay in my own home for three weeks.”

Magni described North Carolina as a “deeply divided state when it comes to LGBTQ attitudes” and added that part of the electorate “is receptive to these kinds of attacks.”

Wadsworth, who at 31 would have been the youngest LGBTQ statewide elected official in the country’s history, lost the race and said she believes her campaign suffered due to the bigoted attacks. She said she has not decided what is next for her politically.

Several candidates experienced an unexpected boost in support and financing as a result of homophobic and transphobic attacks.

In August, a blood bank rejected Jones when he sought to donate plasma after recovering from Covid-19 because he is in a same-sex relationship. A robotext, whose sponsor remains unknown, was sent to voters saying Jones was “discriminated against for recent homosexual contact,” and linked to ShevJones.com, which is not Jones’ website and does not appear to ever have had any information on it. Jones was also the subject of a homophobic flyer with a photo of himself and his partner on vacation and asked, “Is this who you want for your next state senator?”

The attacks did not stop Jones, and paradoxically may have helped in terms of support and funding.

“We raised over $1 million,” Jones said. “When those attacks were coming people just gave more.”

The group Take Back Colorado released a Facebook ad this month that misgendered Titone and referred to her by her “deadname,” the name she used before her transition. The ad also claimed Titone has “always supported violence” and sexualizes children. Then Republican state Rep. Stephen Humphrey voiced a robocall paid for by the Colorado Family Values Victory Fund attacking Titone’s gender identity.

Magni said transgender candidates may be more likely to become the target of attacks because “public support for trans rights is still lower” than for lesbian and gay rights.

Titone triumphed over the attacks, which led to increases in volunteer support and campaign contributions. “The attacks I had to endure didn’t create any obstacles for me that I didn’t already have,” she told NBC News. “If anything, it helped me with raising money and it convinced some people to support me based on the ads.”

She also feels that her attackers were emboldened by the Trump administration that has “given permission to be rude.”

“I’m curious to see how my new colleagues will treat me. Will they be towing the line of those messages, or will they realize that that is not productive and move away?,” she said.

Omar Leos, who won his race for North East School District board in San Antonio, had a similar experience.

“I think it helped energize the campaign. It mobilized more people to come out to volunteer and it definitely helped me financially too,” Leos told NBC News.

“In my personal opinion, it backfired on them,” Leos said.

Texas Family Action, a political action committee affiliated with the conservative San Antonio Family Association, sent a mailer to voters in Leos’ district describing him as being “‘married’ to same-sex man” and noting he has “no children” in the school district. In contrast, the mailer described Leos’ opponent, Ione McGinty, as a “wife and mother of 6.”

While Leos still won, Magni said that such attacks can “force the campaign to redirect the resources and shift media focus,” he said. “The campaign has to respond.”

Leos did say the homophobic attacks prompted him to shift his campaign message to highlight the unwillingness of his opponent to be an advocate for LGBTQ students.

“Before on my signs was ‘Keep Omar Leos,’” he said. After the homophobic attacks he shifted his message to “A voice for all.”

“I’m a voice for all students, for all people,” Leos said.

There is no reason to believe LGBTQ candidates have seen the last of homophobic and transphobic attacks, but Magni said a swift response by candidates and their allies is important to prevent their opponents from defining the narrative of the campaign.

LGBTQ candidates also need to remember that they are targets because they are strong candidates who have the potential to win, Magni added.

“That should encourage them to soldier on and to keep in mind the ultimate goal — that is, that they are running to serve their constituents.”

Big Ten teams have lost home-field advantage without fans. Can Rutgers get it back against Michigan?

Tue Nov 17 , 2020
As he thought about returning to take over the Rutgers football program last fall, Greg Schiano envisioned running out of the SHI Stadium tunnel to 50,000 screaming fans. That dream will have to wait. “You don’t envision running out to an empty stadium as a coach — that’s just not […] 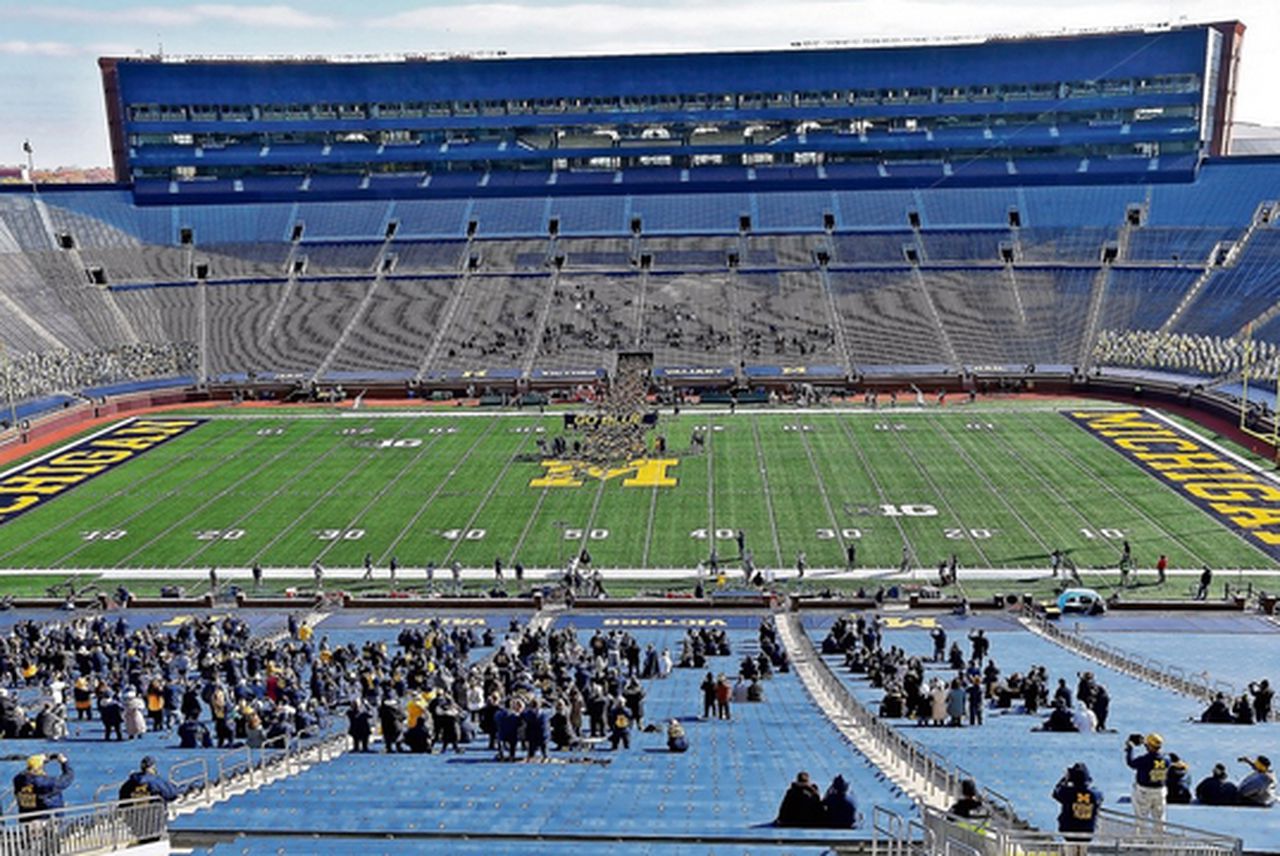