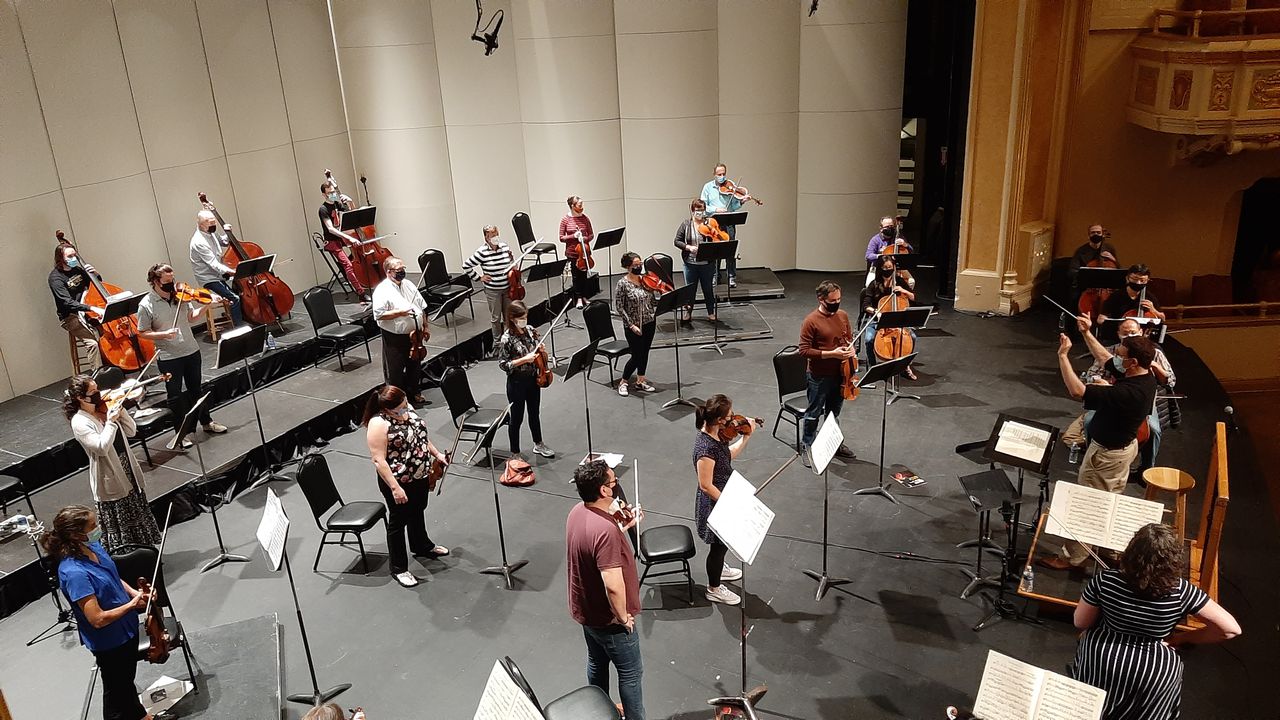 Working through a measure of George Walker’s “Lyric for Strings,” conductor Scott Speck cautions members of the Mobile Symphony Orchestra to think about the cues they take from one another: “You have to watch as much as listen, with this distance,” he says.

It is the evening of Friday, Oct. 16. The streets and sidewalks outside the Mobile Saenger Theatre bustle with the traffic of downtown’s monthly art walk: People enjoy meals and drinks at outdoor tables, browse the arts and crafts offered by vendors, drift in and out of galleries, enjoy music in the street. It is a crisp fall evening, and this is the first time since the onset of COVID-19 that art walk has had it’s full pre-COVID vibrancy.

On the stage of the Saenger, where the symphony is preparing for its first performance since March, things do not look normal at all. In the months of planning leading up to this moment, one of the first things MSO leaders did was to calculate how many musicians could fit onto the Saenger stage if a minimum separation of six feet was kept between players.

Instead of facing 60 or 70 players, MSO Music Director Speck is facing 30. All play strings: Violins, violas, cellos, basses. All are masked, as is Speck. Brass and woodwinds would have presented a bigger challenge, since players can’t wear masks and the very breath that powers their instruments represents a hazard. Out in the theater, half the rows are blocked off, literally shrouded in black. In the open rows, blue signs mark many of the seats off limits. Those that are left make scattered clumps of two and three open places.

For all the strangeness, the mood onstage seems focused and positive. Speck advances the ensemble through the program measure by measure. It’s like seeing a watchmaker tick a timepiece forward a few seconds, then remove layers of gears to smooth a near-invisible burr on a tiny tooth on a cog deep in the machine, then put everything back together, back it up, see if it runs through those seconds to his satisfaction, then advance it a few more seconds.

He’ll make a comment that a certain ripple of notes should be “not quite so extroverted,” for example, and masked players will pick up pencils and add small notes to their sheet music.

On and on it goes, a lesson in the degree to which tiny decisions about emphasis and emotion and communication add up to symphonic impact. Speck says things like, “Let’s do Figure Nine one last time, from the middle of the measure,” and “Now careful, violas, that you don’t get behind the cello.” He gets laughter when he says that for once, he’s getting all the volume he wants from the basses. (They’re all lined up across the back row, right against the acoustic shell, which projects their sound very nicely.)

He gets laughter again later in the night when they wrap up work on one piece and he says, “So much for 45 minutes of very slow music after dinner.”

So many aspects of this are alien, but what stands out is the sense of the familiar reasserting itself. At the beginning of every session the players tune up and that single-note swell of sound is as affecting as almost anything in Barber’s “Adagio for Strings.” It has been so long.

Even the mid-rehearsal dinner is different: Usually it’s a buffet, but COVID concerns have done for that. Tonight, in the Larkins Music Center adjacent to the Saenger, the caterers prepare the plates. The musicians and staff pick them up and go to their widely spaced seats. In most cases, two of them face each other from the ends of a table that normally would seat four or more

As they eat, Speck and MSO President and CEO Celia Baehr discuss the effort that went into finding a way to make a live performance feasible. It required major changes. A normal Tuesday rehearsal was dropped. The length of the performances was cut to under an hour, in order to dismiss all the congestion and mingling of an intermission. The number of performances was doubled to balance out an aggressive capacity reduction that left about 400 seats available out of more than 1,900. Arrangements also were made for an online viewing option for ticketholders.

“We started with the assumption, if there’s any way we can have live music, we want to,” Baehr has said.

That determination has set the MSO apart. Baehr and Speck reckon that maybe 25% of American symphonies are actively staging concerts, and about the same percentage decided not to present 2020-21 seasons at all. But out of those who are active, some are offering online performances only. The number working to go live in front of an audience could be as low as 10%, Speck figures.

Partly they’re taking this approach because they think people need the music they provide. But it’s also partly because they need what the audience provides.

“We play differently based on who’s in the hall,” Speck says. “The quality of the performance is influenced by the spirit and vibes coming from the audience as much as by anything else.”

Speck says that so far he’s very pleased with the level of preparation, the sharpness of skill that the players brought after so long a layoff. “It’s human nature to let things slide a little,” he says, but this has felt like a first rehearsal should.

The discipline to stay ready for an audience shows how eager the players are to have one, he says.

“We’re hungry to have them back,” he says.

Sunday afternoon, before the last of the weekend’s four performances, gloved workers roam the Saenger with wipes and spray bottles of disinfectant, cleaning seat frames, arm rests, railings, door handles — anything that might be a point of contact.

Chris Penton, booking director for the venue, surveys the progress. It’s the tip of the iceberg, he says: Among other anti-COVID measures, the Saenger has upgraded entirely to touchless fixtures in its restrooms.

The Saenger is a city-owned building managed by ASM Global. To be among the extreme minority of large entertainment venues opening for business, even on a limited basis, its coronavirus plan had to be rigorous, Penton says. It had to satisfy ASM, the city, and the Mobile County Health Department.

From March until October, Penton says, the Saenger was dark except for a lone dance recital in June. Rock and blues and comedy shows have been canceled or pushed back into 2021 or rescheduled and then rescheduled again as the pandemic has dragged on. The cost goes far beyond lost ticket sales: Saenger crowds patronize downtown restaurants and bars. Saenger shows provide work for a small army of part time workers who make things happen backstage. All that adds up to a powerful incentive to get the ball rolling again.

Penton says he can’t predict when the concert industry will be able to resume operation, or how it will have changed. But these MSO shows are a small, hard-won beachhead in that larger fight.

“Collectively we have all worked extremely hard to get to this point,” Penton says.

Showtime approaches. Masked patrons filter in and sit, scattered throughout the hall. It doesn’t look like much, with all the empty space, but Baehr later reports that the four shows drew a total of 1,022 in-person ticketholders. While short of the theoretical max of 1,600, it was far better than Baehr’s conservative expectations.

“It’s so wonderful to see you,” Speck says, before launching into a piece he describes as “pure joy,” Mozart’s “Divertimento in D Major.” From there it moves into the somber tones of Samuel Barber’s “Adagio for Strings,” which Speck says is an acknowledgement both of the exposed racial injustice that has generated so much attention in 2020 and of the work of African-American composers, and then even deeper into Walker’s “Lyric for Strings,” a piece synonymous with sadness. This, Speck says, is a tribute to those lost to the pandemic.

And then it’s a return to lighter moods, via Edvard Grieg’s “From Holberg’s Time.” All in all, it’s a program that feels more substantial than its sub-60-minute run time would suggest.

Somewhere in the midst of it Speck tells the audience: “Music can reach us in places we didn’t even know we needed to be reached … Music can go places that words cannot.”

To judge by their applause as the lights come up, Music has done just those things.

Afterward, backstage, Speck says things have gone better than he could have expected. The MSO’s musicians stepped up, he says. With everything so different, every individual player had to assert themselves. It wasn’t possible to simply follow along with the person at your elbow — because this time, they weren’t there.

“It makes for a better orchestra,” he says. “You can’t follow, when there’s this much distance.”

Next up for the Mobile Symphony Orchestra: “Beethoven and Blue Jeans,” Nov. 14-15; plans call for use of some percussion in addition to strings. “A Bountiful Holiday,” Dec. 12-13; plans call for limited use of brass and woodwinds. For ticket information and other details, visit www.mobilesymphony.org.

Next up for the Saenger: A classic movie series continues with “Muscle Shoals” on Oct. 22, “National Lampoon’s Vacation” on Oct. 25 and “Pretty Woman” on Oct. 29. Visit www.mobilesaenger.com for full details on these and other movies in the series. “The Prophecy Show,” a tribute to the Trans-Siberian Orchestra, will perform Dec. 3.