Missy Buchanan’s family in California will still see her smiling face around the table for Thanksgiving. So will relatives in Texas Hill Country, too. There are traditions to keep up after all.

In fact, she’s already in both places at once — as a cardboard cutout. The real Buchanan and her husband will celebrate Thanksgiving alone from their Rockwall home. The grandparents decided not to travel this year as COVID-19 cases spike around the country, and instead mailed out life-size cardboard cutouts of themselves to their families.

“We are a close and fun-loving family, so I kept trying to think of something unexpected that would make them giggle,” Buchanan said. “It just came to me — stand-in grandparents for the win.”

Buchanan and her husband will still try to keep as many of their Thanksgiving rituals intact. They’ll still have a full turkey dinner, but it will be in front of a Zoom screen instead. The Buchanans are just one of many North Texas families who are changing, canceling or taking their Thanksgiving dinners virtual while trying to maintain a sense of normalcy and tradition.

In a year like 2020 that’s been defined by uncertainty, holidays like Thanksgiving are a time to reestablish bonds and family values, according to Dr. Lauren Ratliff Santoro, an assistant professor of political science at the University of Texas at Dallas.

“I think repairing those bonds and establishing other common ground will open the door to the future,” Ratliff Santoro said. “Just reaffirming in family gatherings — if you’re able to see them — ‘Hey, I love you, and you’re family.’”

And the changes in the holiday this year could spark new traditions. Buchanan said she expects that her grandchildren will “decorate” her cutout with a pilgrim hat or as a turkey, and she doesn’t mind as long as they have fun.

“We wanted to set an example of trying to stay safe and being wise,” Buchanan said.

For families that gather — whether online or in person — simply getting together is a sign of common ground, Ratliff Santoro said. It could be that those gathering decided to quarantine or get tested before Thanksgiving, or that they decided an outdoor celebration is the safest option.

Though many families will be celebrating outdoors or eating online, for some, like Fiana Tulip, traditions will be harder to keep. This Thanksgiving will be Tulip’s first without her mother, Isabelle Papadimitriou, who died of COVID-19 this summer. Papadimitriou was a rehabilitation respiratory therapist at Baylor Scott & White Health in Dallas. 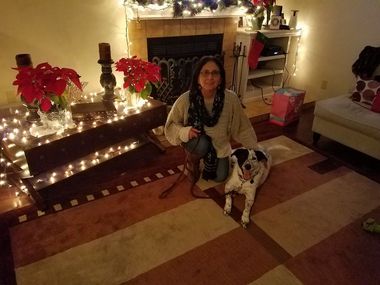 Tulip, who lives in New York, called her brother on Monday to tell him she was not going to travel to Dallas for Thanksgiving.

“I kept trying to figure out how to justify a trip to Texas, but I couldn’t,” Tulip said. “Yes, my mom died and I need to be with my family, but more than 2 million other families have the same reason. I can’t be part of the problem. We’re all in a tough place.”

Tulip waited until Monday to tell her brother, though she had already made the decision before that — she hadn’t purchased flight tickets.

Her husband, however, is encouraging her to celebrate and be thankful for the memories she had with her mother. If they do decide to celebrate, Tulip will honor her mother by preparing her mother’s favorite foods.

“Cranberry sauce has to be on the table,” Tulip said.

The Centers for Disease Control and Prevention last week cautioned against traveling for Thanksgiving as COVID-19 cases continue to rise. The CDC also warned that gatherings could lead to increased spread between families. Officials are urging residents to celebrate with only those within their immediate households to limit exposure to others.

For those who do plan to mingle with other households, public health officials recommend keeping dinner short, using plenty of hand sanitizer and — if the weather permits — having dinner outdoors, where the risk of transmission is lower.

That’s what Caitlin Garafola of Collin County plans to do with her family. Her household of five will have an outdoor dinner with her two brothers at tables spaced 10 feet apart. Garafola is a teacher, one brother manages a coffee shop, and another brother works in construction — all jobs that require interactions with many people.

“This is the only way we’ve felt safe to meet together,” Garafola said. Her family considered doing a spaced-out dinner indoors if it’s chilly on Thanksgiving, but they scrapped that plan as cases rose.

“With the spikes, we decided if it’s cold we will bundle instead,” Garafola said.

For others, like Austin Karber, 30, the decision to not gather with family was an easy one — five members of his family in Amarillo have contracted COVID-19.

“We were really unsure if we wanted to go back to Amarillo,” Karber said.

A normal Thanksgiving for his family would include as many as 30 people from five to six different households. As cases rose in Amarillo over the past few weeks, he and his wife were already weary of traveling to the Panhandle, but when they learned members of their family had fallen ill, they immediately canceled their plans.

“It was already pretty dicey, but that sealed the deal,” Karber said.

Karber and his wife will still keep an important tradition intact — watching the Dallas Cowboys play — but they’ll do it alone from their Oak Cliff home.

Holly McGuire, a Dallas native who now lives in Chicago, said she chose not to fly home for Thanksgiving, a decision she made before the CDC announced its guidance.

“I can’t risk passing something to my elderly parents,” said McGuire, who will miss Thanksgiving with her parents for the first time in 33 years. “It’s just one day and next year will be better.”

Wed Nov 25 , 2020
This story is part of Holiday Gift Guide 2020, CNET’s gift picks with expert advice, reviews and recommendations for the latest tech gifts for you and your family. Nintendo doesn’t have a new console this year like the PS5 or Xbox Series X and it’s entirely possible that the person […]