The couple visited an iconic East London bagel shop at the end of a day of engagements in the capital, where they dropped into a job centre and a mosque.

The duke and duchess first visited a job centre in London Bridge, where they spoke to people being helped back into work as lockdown eases.

They then went to the East London Mosque and London Muslim Centre in Whitechapel where they heard about how volunteers had been helping to deliver warm meals, food and hygiene packs and medication to vulnerable members of the community.

As they ended the day at Beigel Bake in London’s Brick Lane, William encountered a problem facing many Brits as he struggled to be understood and had to repeat himself as he chatted to the shop’s staff about supply chain issues through the pandemic.

Royal editor Emily Andrews, who accompanied them on the trip, tweeted: “It is quite difficult to have conversations through these masks, but Kate & William are definitely trying at the Beigel Bake Brick Lane Bakery!”

William and Kate, who have moved back down south from their home in Norfolk, also visited a job centre, and a mosque as they spoke to Londoners about how they had coped during the coronavirus lockdown.

The Duke and Duchess of Cambridge had been in Anmer Hall, their home on the Sandringham Estate, since March, but probably moved back when Prince George and Princess Charlotte were due back at school at Thomas’s Battersea.

Video: It is quite difficult to have conversations through these masks, but Kate & William are definitely trying at the Beigel Bake Brick Lane Bakery! pic.twitter.com/WAZvJ1Z6B3

While at the Islamic Centre, they met people who have benefitted from funds from the National Emergencies Trust, of which William is a patron.

It was through the NET that William, 38, made the first royal statement about the coronavirus pandemic in March.

The final trip of the day was to Beigel Bake Brick Lane Bakery, a 24-hour bagel shop well known in East London.

The couple helped shape and shift some of the dough for the iconic treat, and heard about how the shop had to reduce its hours during the pandemic, and how that impacted their staff.

Kate, 38, was wearing a red Beulah dress for the engagement, and tan heels. She and William also wore face coverings and observed social distancing.

The dress has been worn on a couple of occasions recently by the duchess, including in May when she and William were part of the mental health minute, that saw them take over radio stations across the UK.

William and Kate are beginning to step up in person visits after a summer carrying out engagements online because of restrictions on travel and the number of people allowed to gather.

The details of their engagements are being embargoed so that crowds don’t gather to see them.

William went to Belfast last week to meet some of Northern Ireland’s emergency workers, but Kate did not travel with him.

This is their first joint in-person engagement since their summer break.

Wed Sep 16 , 2020
Getty Images Boris Johnson will face a grilling from senior MPs amid a warning that the “failure” of the test and trace system is placing “huge pressure” on the health service. As the system struggles to cope with soaring demand, people have been turning up to accident and emergency to […] 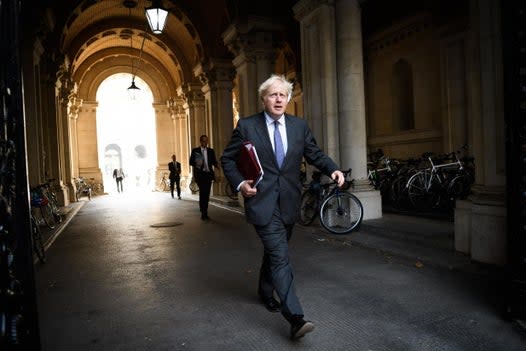