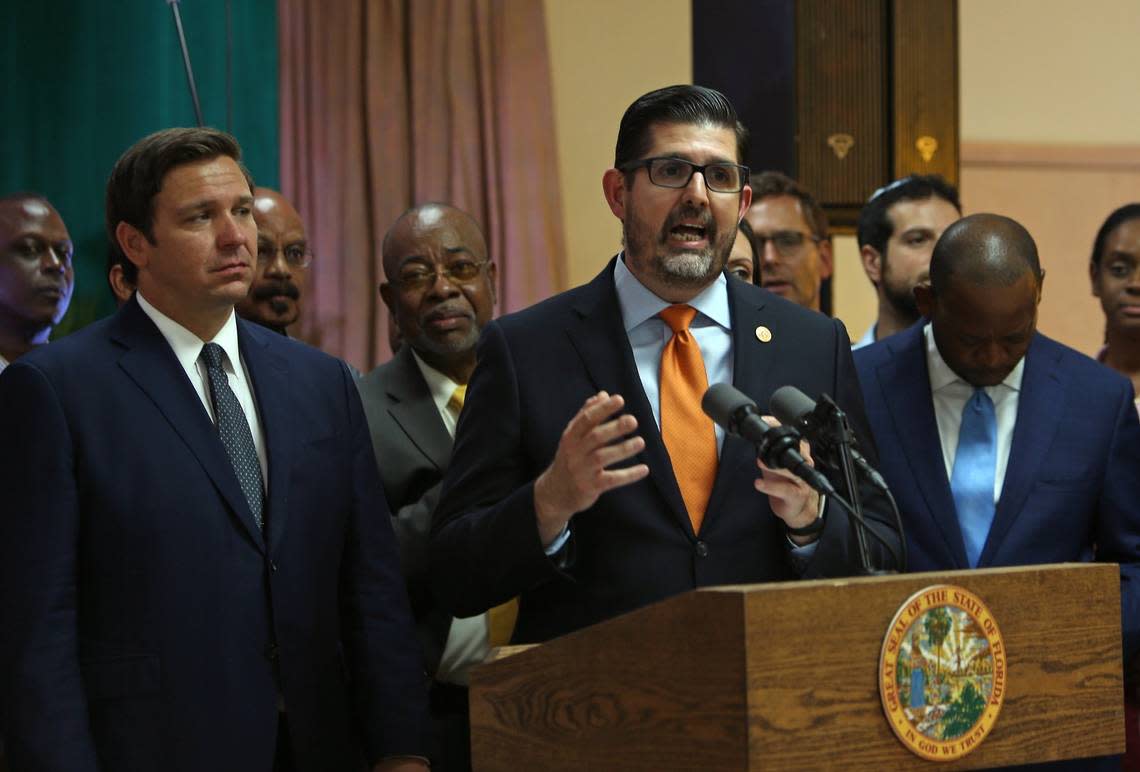 A controversial proposal dealing with vacation rentals underwent a major overhaul on Thursday, after the bill sponsor stripped out a provision that would have blocked local governments’ ability to license and inspect the properties.

The fight about oversight of short-term rentals has escalated in the Legislature as the popularity of vacation properties advertised on platforms such as Airbnb has mushroomed.

At the heart of the legislative wrangling is an effort to “preempt” regulation of short-term rental properties to the state, a move that draws vehement opposition from city and county officials because it would take away local authority.

Sen. Manny Diaz Jr., R-Hialeah, filed a proposal (SB 522) in January that included requiring online platforms to collect and remit taxes on vacation rental properties, something the platforms have not been required to do in the past. The measure also included requiring platforms to ensure that only properly licensed rentals are advertised and provide the state with specific information about the rentals.

In exchange, regulation would have been preempted to the state, largely preventing local governments from licensing or inspecting the rentals. Local governments could have only regulated the rentals in the same way as other properties in neighborhoods, a restriction that cities and counties strenuously opposed.

But an amendment offered by Diaz and accepted by the Senate Appropriations Committee on Thursday deleted the regulatory preemption parts of the bill, while leaving in requirements making platforms responsible for such duties as collecting and remitting taxes to the state and ensuring rental properties are licensed.

The latest version of the bill also says nothing about regulating rentals in the same way as neighboring properties.

Senators have been split on the bill, but Diaz’s effort to maintain the status quo regarding local governments’ oversight authority earned support Thursday from Sen. Ed Hooper, a Clearwater Republican who voted against an earlier version.

Hooper said he “almost universally” opposes preemption laws, but the bill gives the state the ability “to register, regulate and make sure that the appropriate revenue” from vacation rentals makes it into state coffers.

Diaz’s amendment, which drew support from the Florida League of Cities, “makes the bill better and the fact that it does no further harm to my communities gives me great comfort,” Hooper said.

“Sen. Diaz, you’ve turned a hard no into a pleasant yes and I appreciate your efforts,” Hooper said before the committee voted 13-5 in favor of the revised bill.

State law already bans local governments from passing ordinances to outlaw vacation rentals, which have raised the ire of residents who complain of investor-owned “party houses” in neighborhoods. Other critics maintain that owners of some rental properties are failing to properly submit state and local taxes.

But proponents of Diaz’s earlier version contend that the short-term rental properties are used to supplement the incomes of retirees and families.

The earlier version would have done away with ordinances regulating short-term rentals adopted after June 1, 2011. Opponents said such a provision would be problematic for areas that have worked in recent years to develop local regulations.

But Senate Minority Leader Gary Farmer said that, even with the changes adopted Thursday, he could not support the proposal. Farmer, D-Lighthouse Point, said his district includes two cities that are in the 10 most-popular vacation rental sites in the state. Diaz’s plan doesn’t give local officials enough control, Farmer argued.

“When you purchase a home in a single-family residential neighborhood, you have an expectation of solitude and peace and tranquility,” he said. “I just still believe there should be no restrictions.”

‘A WORK IN PROGRESS’

In a phone interview following the committee meeting, Diaz said the vacation rental legislation “is clearly a work in progress.”

He said he stripped some of the language out of the proposal because “there’s a lot of concerns and misconceptions with what was in the bill on the changes to the local piece.”

“Now that it’s removed, it makes it easier to have the conversation without confusing what locals can and cannot do,” he added.

The bill would require platforms to pre-verify that properties advertised on their sites are licensed, which would be difficult if local governments cannot perform inspections, Diaz told The News Service of Florida.

“That could be very tricky without any piece that at least creates some kind of, at least, framework for the locals,” he said.

Diaz and supporters of his earlier version of the bill maintain that vacation-rental owners are entitled to the same rights as their neighbors and shouldn’t be regulated differently.

The Hialeah Republican told the News Service “a conversation still needs to be had as to property rights” and ensuring that ordinances apply “across the board.”

“Where it ends up, I don’t know, but I think that’s a conversation we need to have,” he said.

Before taking over as Senate president last year, Trilby Republican Wilton Simpson worked behind the scenes to forge a proposal that garnered support from the advertising platforms, Florida Realtors and even the Florida Restaurant & Lodging Association, which in the past has strenuously resisted similar measures.

But Gov. Ron DeSantis put the kibosh on the proposal, saying in February 2020 he had reservations about it.

“We have 22 million people, almost. We are a very diverse state. For us to be micromanaging vacation rentals, I am not sure that is the right thing to do,” DeSantis said at the time.