A bright blue plastic recorder, dishwasher-friendly. A chipped faux-plaster relief of a winged cherub, forehead stuck with a Hatsune Miku pin. A single acrylic nail, pale pink and thumb-sized, wedged between the scales of a pinecone.

These are a few of the items you’ll find under the 1000 gecs tree, an otherwise nondescript evergreen perched on the perimeter of a sparse manufacturing campus in Des Plaines. Members of Gen Z have been traveling from far and wide to the tree over the past year with increasing frequency, a fanatic pilgrimage inspired by a recent experimental pop album.

Last May, musical duo 100 gecs released one of the most abrasive and entertaining albums of 2019 in “1000 gecs,” a 23-minute fever dream of neurotic synths, chipmunk-pitched vocals and unexpected dubstep. The year following saw the album cement itself as a hyperpop cult classic as it took flight among critics and TikTokers alike.

But the album’s deadpan cover art — a photo featuring members Laura Les and Dylan Brady (the former based in Chicago) facing a pine tree at dusk — has served as fodder for facsimiles and memes of all kinds, from kids posing in front of neighborhood bushes to virtual renditions in Minecraft.

The game elevated when someone leaked the geographic coordinates of the original tree as a “Place of worship” on Google. Turns out the tree is a 30-minute drive from Wrigley Field. Now Zoomers nationwide are migrating en masse to an office park just north of O’Hare Airport, seeking to bask in the glory of a conifer and leave “offerings” among its needles.

“It was a very spiritual experience,” said Bridget Lynch of Orland Park, 19, a Wellesley College student and 100 gecs fan who travelled to the tree with four friends and a car full of Taco Bell for a niche picnic.

“We were running around the entire building looking at all these trees, comparing them to pictures, trying to find the right one,” Lynch said. She and her friends employed social media as a reference point throughout, eventually identifying the correct tree using posts from previous pilgrims.

“TikTok served as a GPS for us,” Lynch explained. “But our Taco Bell was kind of cold by the time we sat down.”

Joe Casanova, a 23-year-old from Orlando, Fla., also opted to make the pilgrimage with a group. He and a handful of friends were solidifying plans to travel cross-country for the 2019 Midwest FurFest — the largest furry convention in the world, held every December in Rosemont — when they realized that the tree was a 15-minute drive from their hotel.

For Casanova, who was hooked on geclife from the gec-go, it was fate.

“That album cover is just such a cultural symbol right now that it being there so close to the convention was just like, ‘we gotta go,’” said Casanova. He and his friends spent the eve of the FurFest at the tree, an experience Casanova likened to collecting vinyl records of personally significant albums.

“(1000 gecs) was definitely a large part of my 2019 experience,” said Casanova, “And so to go there and be there physically, and to have a good time there with my friends, kind of solidified my connection with what that album is.”

But not all travelers visit in packs. Umru Rothenberg, a 21-year-old music producer from Brooklyn, made a 6 a.m. journey to the tree by himself. A colleague of the artists behind the album, Rothenberg was staying with Les in Chicago in late February when he decided to pay his respects before catching a flight home.

“It seemed like it was important to go, once in my lifetime at least,” said Rothenberg. “And it’s close enough to the airport that it was worth going at 6 a.m., having an Uber drop me off in the middle of nowhere by a tree.”

Rothenberg called another Uber to pick him up from the tree after his visit.

While some pilgrims boast personal connections to Les and Brady themselves, others aren’t even outright fans of their music. 22-year-old Matt Hill from Elk Grove Village is not sure that he’s a 100 gecs fan per se, but recently bicycled 45 minutes to the tree (and back) at the urge of his fanatic friends, a decision Hill said was influenced by quarantine.

“I would not have considered riding my bike for that long unless the world was shut down,” said Hill.

Although the album isn’t exactly his cup of tea, Hill was captivated by the culture of veneration around the tree itself, which he frequently referred to as a “community center.” It reminded him of another cult-music landmark — the house on the front of emo band American Football’s self-titled 1999 album, which happens to be in Urbana.

“It’s interesting that those two are so close together, and both of them have album covers that just feature mundane things in the middle of Illinois,” said Hill. “I don’t know what it is about Illinois that fits the very different moods of both those albums.”

Hill was most impressed, though, by the wide array of items left at the tree at the time of his visit: a blue hula hoop thrown into higher branches, “some bones,” a drawing from “Diary of a Wimpy Kid,” paper cranes and a bedazzled rainbow cross, to name a few.

But Hill admitted that “maybe 40% of the offerings were just garbage,” touching on a larger debate within the fan community about whether left items are expressions of artistic kinship or just plain litter.

Lynch is familiar with this internal community issue, having heard unsubstantiated Twitter rumors about its potential repercussions.

“Apparently the company whose property it’s on is threatening to cut it down because people keep littering and stuff,” said Lynch, who was careful to clean up her Taco Bell. Lynch added that she was willing to handcuff herself to the tree if it were indeed threatened with removal.

The company who owns the property is Acuity Brands, an Atlanta-based lighting and building management firm. Despite the rumors, Carlton Blunt, a facilities manager at the Des Plaines location, told the Tribune in a recent phone call that, as of August 5, he didn’t plan to cut down any trees. (cq)

Nevertheless, the facility seems to be aware of the peculiar Zoomer activity taking place on the edge of their property. When I visited the tree last weekend, my companion and I were immediately stopped by a masked security guard who kindly told us to “make it quick, people have been littering over there.”

The tree I saw, however, seemed to be in better shape than the iteration Matt Hill visited. Aside from a single tube sock and a few wads of gum mushed between pine cone buds, there didn’t appear to be many items that were explicitly waste. Most of the offerings Hill described seemed to have been cleared away and replaced with a more subdued spread: A rock painted to resemble the Earth, a miniature Pikachu figurine, a plush Neopet and scented candle next to the blue recorder and angel face.

The overall impression felt more like a memorial than a trash heap, perhaps to the credit of fans that have already disparaged the littering online, pledging to clean up their sanctuary or reimburse efforts to do so.

The longevity of the landmark, it seems, is in their hands. A community that creates a shrine out of a tree in an office park together takes care of it together.

“It’s not anything special except for the tree,” said Rothenberg.

“And it’s not even in the woods … I don’t know if there’s something to be said about that except that it’s a totally random tree that’s got a Google Maps location as a Place of worship. I mean, that’s crazy.”

Thu Aug 6 , 2020
Chinese moviegoers are set for a Christopher Nolan bonanza on the big screen: his sci-fi epic “Tenet” will launch in Chinese theaters on Sept. 4, a week after an Aug. 28 re-release of “Inception.” Meanwhile, the theatrical re-run of his 2014 “Interstellar” is blasting past competition at box office as […] 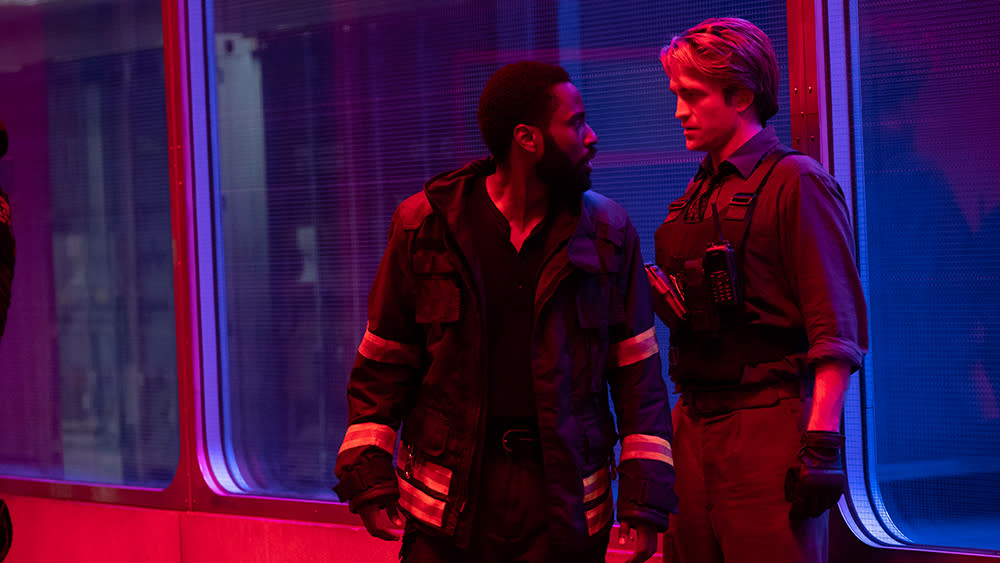