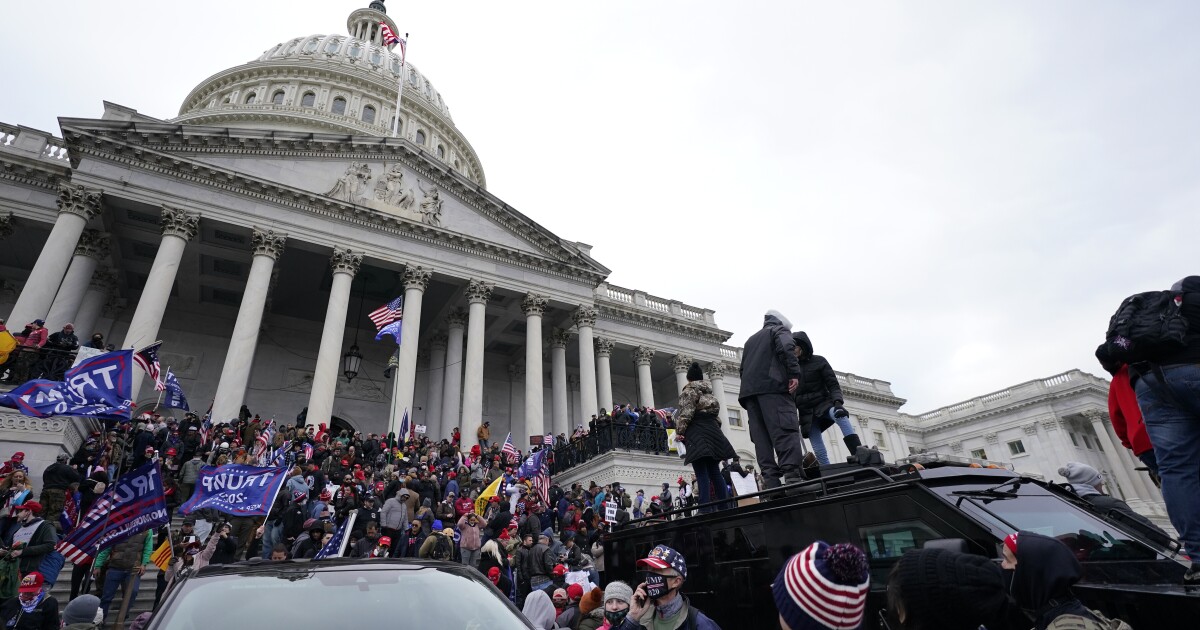 Leandra Blades visited Washington this week for a self-described girl’s trip to spend time with friends and sightsee.

It was like a slumber party with wine, said Blades, who was recently elected to the Placentia-Yorba Linda Unified Board of Education in Orange County, in an interview streamed online.

Except that two days into the sojourn, Blades and her friends attended the rally of Trump supporters that culminated in the attack on the U.S. Capitol in which five people were killed and the nation’s democratic foundation was shaken to its core.

Blades, who denies entering the Capitol or participating in the violence, is one of at least two Southern California officials facing calls to resign because of her presence at the event. An online petition calling for her to step down had nearly 2,800 signatures as of Saturday afternoon.

“I’m not going to hide my beliefs to appease people,” Blades said Friday in the live-streamed interview with Andy Falco, who bills himself as a CBD expert, retired police officer and motivational speaker. “This is who I am, and I can still work with people, do my job and do what’s best for the kids in Yorba Linda and Placentia.”

Blades did not respond Saturday to a message from a Times reporter seeking comment.

The school district said in a statement that board members can exercise their right to freely express personal views provided they act with dignity and make clear their opinions are their own.

“To the extent any public statements were made by or about any individual board member concerning the events that took place on Jan. 6 in Washington, D.C., we want to be clear that those statements were not viewpoints shared by the board or the Placentia-Yorba Linda Unified School District,” the district said.

A similar scene is playing out in Whittier, where the City Council will on Tuesday debate whether to censure Councilwoman Jessica Martinez after she also traveled to Washington this week.

Martinez announced her intent to participate in the rally on Twitter alongside multiple tweets questioning the legitimacy of the presidential election and branding Republicans who accepted the result as “traitors.” On Wednesday morning, she also uploaded a clip of video footage from the rally.

“I was elsewhere in Washington, D.C., exercising my constitutional right of free speech at a rally and immediately began heading home after it concluded,” she wrote.

Whittier City Councilman and Mayor Pro Tem Henry Bouchot, who is one of those calling for Martinez to be censured, said he finds it hard to believe that she was attending a different rally that day, and that her participation disturbed him.

“I was not expecting a colleague on our elected body to be anywhere within 1,000 miles of Washington, D.C., much less smack dab in the middle of a ‘stop the steal’ rally,” he said.

“Any attempt to delay or prevent the peaceful transfer of power is a threat to our democracy and there must be consequences,” Hahn said Friday in a statement.

Martinez has been a source of controversy since she was elected to the Whittier City Council in March.

Shortly after she took office, as she also ran for state Assembly, she was a plaintiff in a lawsuit filed by the conservative Center for American Liberty seeking to block Gov. Gavin Newsom’s allocation of $75 million to provide financial help during the COVID-19 pandemic to immigrants in the country illegally who don’t qualify for unemployment insurance.

The suit, which was dismissed in May, drew protesters to Martinez’s home.

In June, the Greater Los Angeles Area office of the Council on American-Islamic Relations called for Martinez to resign over what the organization described as “repeated racist and Islamophobic tweets targeting Muslims, Asians and indigenous people.”

The group cited postings promoting a meme of President Trump with a Fu Manchu mustache that read, “OK, I will not ‘say’ it’s the Chinese virus,” a tweet about Sen. Elizabeth Warren in which Martinez wrote, “President Pocahontas? She needs a Wigwam not the White House,” and a tweet about Rep. Ilhan Omar (D-Minn.) in which Martinez wrote that she “can go back to wherever she came from and REALLY be a victim.”

“Council Member Martinez has shown herself to be an equal-opportunity bigot and her social media comments are beneath the office she currently holds,” CAIR-LA Executive Director Hussam Ayloush said in a statement at the time.

Martinez’s participation in the lawsuit and her social media activity spurred discussion among her City Council colleagues but no action, said Bouchot, a U.S. Marine who was elected in 2013 and is currently the only Democrat on the four-member council.

“I didn’t think we took a strong enough step as a council then despite my urgings,” he said Saturday. “And I think we’re seeing the repercussions of that.”

More than 4,400 people had signed a new online petition calling for Martinez to be removed from office as of Saturday afternoon.

But that won’t happen even if the motion to censure her prevails — it is simply a formal declaration of condemnation by her colleagues, Bouchot said. He said the City Charter does not provide for council members to be removed unless they resign or are recalled by a vote of the people.

Still, he said, voting to censure a council member is “pretty serious,” and he doesn’t believe it’s ever happened in the city of Whittier.

“I think Jessica has an opportunity to start to make our community whole and I think that starts with a formal acceptance of responsibility,” he said. “So she’s obviously made a grave mistake. Some people feel that that mistake is not something that you can recover from. But this is an opportunity for her to decide if she’s going to continue down this hole or if she’s going to be somebody who unifies people.”

Far from apologizing for her attendance at the rally, since returning from Washington, Martinez has retweeted multiple messages blaming undercover agitators from antifa and Black Lives Matter for the violence that transpired.

Blades, who was elected to the school board in November, also hinted at that conspiracy theory, noting that she was warned of antifa attendees by unspecified people at her hotel, as well as at least two Uber drivers who transported her and her friends around Washington.

“And so, yeah, so do I believe they were there?” she said, nodding in her livestreamed interview. “Did I see them enter the Capitol? No, I sure didn’t.”

In the interview, Blades said she first heard the Capitol had been breached while attending a Trump rally at the Ellipse, a park roughly a mile and a half away.

Dismissing the information as a rumor, she stayed with the group as it made its way to Capitol Hill, where people were waving flags and singing amid vendors and food trucks, she said.

Blades said that it wasn’t until her husband texted her that she learned something darker was transpiring: people had entered the Capitol and someone had been shot.

That woman, a 35-year-old Iraq War veteran from San Diego named Ashli Babbitt who was shot by Capitol Police as she climbed through the broken window of a door to the Speaker’s Lobby, died of her injuries.

In addition, Capitol Police Officer Brian Sicknick died after he was reportedly struck with a fire extinguisher, and two other men and a woman suffered fatal medical emergencies in the melee.

Still, Blades said that even once she was near the building, she never saw anyone enter the Capitol, nor did she participate in the attack.

She said she left a short time later to get lunch with her friends.

Blades also declined to express remorse, noting that she’s been open about the fact that she’s a conservative Republican and outspoken Trump supporter. She said it was important for her to attend because she knew it might be the last chance for her to experience a Trump rally.

“We walked away from this trip with so many friends, so many new experiences,” Blades said. “It was just a great time for us.”