It was hard enough to be poor and in need of help in Los Angeles before the COVID-19 pandemic hit.

Before the whole world started lining up for unemployment benefits and the phone lines at the state Employment Development Department jammed up.

Before such government offices as well as many courts shut their doors, making it all but impossible (except in some cases by appointment) to ask a question, file an application, fill out a form or produce required documentation in person.

Before some ways of earning a living disappeared and others became suddenly dangerous.

Before trying to stay safe at home became dangerous too for some who found themselves threatened by landlords eager to get rid of them or cooped up with their abusers.

I’ve spent the week talking to valiant lawyers at two nonprofits, the Legal Aid Foundation of Los Angeles and the Inner City Law Center. Their life’s work is to help our neediest. They feel it intensely when they can’t.

The stories they’ve told me about the travails of those who have been seeking their assistance of late have made me ever more aware of the abyss between weathering a storm like this in reasonable domestic comfort, with some financial padding, and trying to do the same without any such buffers.

Access remains a fundamental hurdle for many right now: access to critical information, access to computers and the internet for online filing and printers for those processes, such as requesting restraining orders, that still require paper copies. Access even to mail. Yolanda Arias, the managing attorney for the Legal Aid Foundation’s economic stability work group, reminded me that many homeless people, lacking fixed addresses, get mail about their benefits at county Department of Public Social Services offices, which remain largely closed.

People trying to get the benefits they need are unable to find information in a language they know. Some are selling their belongings and begging strapped family members for loans because of lost or backlogged or flagged applications for benefits they have every right to get. Unscrupulous employers are trying to force people back to work with big deductions in their pay or safety gaps. Unscrupulous landlords are using extralegal means to try to get rid of tenants protected by eviction bans.

Yes, some good temporary protections have been put in place to try to help people — to keep many of them, for instance, from being evicted right now even if they cannot pay their rent. But just as some people try to take advantage of those who don’t know their rights, gaps also exist in those protections.

Some people, for instance, already were in the process of being evicted before coronavirus protections came in and temporarily put those processes on hold. This month, the Los Angeles County Sheriff’s Department resumed enforcing those pre-COVID evictions — even as the lives of those being evicted have grown more unstable since the virus hit.

A single mother was taking care of her own mother as well as her four children, one of whom has disabilities. She’d been struggling to make ends meet before her landlord added several hundred dollars to her rent last year. When she couldn’t keep up, the landlord began the eviction process. They reached an agreement to delay that process but then the pandemic hit and left the single mother out of work. She gave the landlord what she could for rent, but the landlord wasn’t satisfied.

The Inner City Law Center got involved just days before a hearing on the scheduled sheriff’s lockout, said Donella Green, the center’s supervising attorney for homeless prevention. The court allowed the lockout to go forward. Now this family of six is about to lose its housing, just as the kids are starting online school. Their mother will have to try to search for a way to put a roof over their heads as she also works to keep the kids connected so they can learn — when the obvious places to do that, such as public libraries, remain closed.

Some landlords and employers and domestic abusers, by refusing to hold to safety precautions, essentially have weaponized the coronavirus as a threat.

Monica Arellano, the managing attorney for the Legal Aid Foundation’s program for preventing and ending homelessness, told me of a person who had lost his job just before the pandemic and couldn’t pay his rent. His landlord began the process of evicting him, but couldn’t legally complete it. Now, as he tries to stay free of COVID-19, the landlord enters his rental constantly for random inspections.

Rob Reed, the directing attorney for homelessness prevention at the Inner City Law Center, told me about a couple with children living in a small rent-stabilized apartment who were in the midst of eviction proceedings when the virus hit. While the mother, who thought she had the virus, tried to self-isolate to keep her family safe, the building’s owner, unable for the time being to legally evict, began insisting on repairs and then sending unmasked workers to do them.

“You’re stuck at home. You have nowhere to go….There’s a lot of intimidation going on,” Reed told me.

Matthew G. Clark, a staff attorney who handles employment-related cases for the Legal Aid Foundation, told me of one woman who called in because her boss at a pricey gym told her that she needed to come back to work even though the high-end customers could not be expected to wear masks. Clark advised her she had good cause to refuse to return and collect unemployment benefits.

The people whose stories the lawyers recounted to me are the relatively lucky ones really. At least they’ve found their way to resources, to people determined to help them. And often they’ve gotten the help they needed most.

Project Roomkey, the program which has moved more than 4,300 homeless people particularly vulnerable to the virus into hotel and motel rooms, has given lawyers from both nonprofits the ability to reach out to homeless people and give them sustained help without losing track of them as they move — a silver lining for them in this tough time.

So are the good outreach programs they already had in place pre-pandemic.

Ronnette Ramos is the managing attorney for medical-legal partnerships at the Legal Aid Foundation. Through those partnerships at four medical clinics in the L.A. area, which predate the coronavirus, patients get connected to lawyers if they need legal help.

Ramos told me of one case in which a nurse-practitioner noticed strangulation marks on the neck of a woman who came into a clinic for her newborn’s wellness check. The woman then said that she’d been forced to move in with her baby’s father, who’d long been abusive, after someone in the home she was sharing with relatives got the virus. The baby’s father recently had squeezed her neck as he forced her to have sex with him.

The clinic got the woman in touch with foundation staff attorney Erin Gunter, who helped her get the protection she needed. Police arrested her abuser on suspicion of domestic violence. Gunter ended up getting her a two-year restraining order against him.

“But for that wellness check, who knows,” Ramos told me, which points out another toll of this crisis on those in great need.

The Inner City Law Center and the Legal Aid Foundation of Los Angeles in normal times maintain highly visible presences in numerous different ways. They hold community clinics. Their lawyers can be found at the courthouses. People can walk into their well-placed offices and get a helping hand.

Now the lawyers mostly are working out of their homes. The offices are closed. In-person clinics can’t be held.

They do outreach, of course, to let people know they’re still here. They’re going down their lists of former clients, trying to contact them and check in.

But think of how many people who have never heard of their services are out there in crisis, not knowing where to turn. Think of how many must be falling into the cracks of the sidewalks they suddenly find themselves living on.

Sat Aug 22 , 2020
You’re meeting a friend for drinks after work, excited to catch up on her recent vacation and hear what she thought about Euphoria. But when she arrives, she has other things on her mind: She’s been unhappy at work and feels like her manager isn’t taking her concerns seriously. Hoping […] 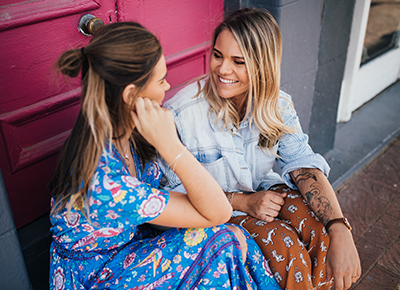