The tech success story is an all-consuming one for investors, which reached further dizzying heights when Apple became the first listed company to reach a staggering valuation of $2 trillion.

The sector as a whole has been given a new lease of life by lockdown shopping, headlines about entrepreneurs such as Amazon founder Jezz Bezos’s $100 billion fortune and Apple’s bid to become the world’s first $2 trillion company. After such a strong run, seven tech stocks, including Facebook (FB.) and Microsoft (MSFT), now make up a quarter of the S&P 500 index.

To many investors, it seems like tech is the only game in town – but there must surely be more the huge US market than technology. We’ve asked some US fund managers where they see the opportunities beyond the FAANGs.

US healthcare, how to fund it and who pays for it, has long been a contentious area and has made the investment case for the sector tough, particularly in election years. But coronavirus has changed the debate around healthcare completely, says Grant Bowers, manager of the Franklin US Opportunities Fund.

Regardless of who gets into the White House, he expects healthcare spending to rise and for that to wave to lift all boats. He is keen on medtech companies like California-based Edwards Lifesciences (EW), which makes artificial heart valves.

“Edwards remains the dominant force in surgical heart valves and minimally invasive valve therapy – one of the hottest areas in cardiac devices,” says Morningstar analyst Debbie Wang, who assigns the company a narrow moat because of its long history in pioneering technology and level of trust among heart surgeons.

Margaret Vitrano, co-portfolio manager of the four-star rated Legg Mason ClearBridge US Large Cap Growth Fund, says that compared to sectors like technology, “healthcare stocks remain attractively priced for the growth they deliver”. She believes there’s been a sea-change in attitude towards the sector: “There is growing sentiment that we need a thriving healthcare sector and companies that can invest in R&D to address unmet medical needs.”

She likes medical testing firm Thermo Fisher Scientific (TMO) and UnitedHealth Group (UNH), which offers a one-stop-shop including insurance and analytics. “The company’s integrated strategy has resulted in some of the best returns in the industry in recent years,” says Morningstar analyst Julie Utterback, assigning UnitedHealth a narrow moat.

The financial sector is poised for change and disruption, says Bowers, who invests in Visa (V) and Mastercard (MC): “The rise of electronic payments has changed consumers’ relationship with their money”. We have recently looked at how the Covid-19 crisis has accelerated the demise of cash, with Venmo-owner Paypal (PYPL) one of the main beneficiaries as people increasingly use smartphones to transfer small sums of money.

For Bowers, though, some of the most enticing opportunities involve streamlining investment bank processes, such as automating back office functions. He thinks bond trading is one of the areas that has so far lagged the technological revolution as it still relies on phone trading and person-to-person meeting.

Fintech firm MarketAxess (MKTX), meanwhile, offers electronic trading platforms and is set to disrupt this previously staid market, according to Bowers. Regulatory pressure on big banks is likely to increase the demand for transparency over trading, he adds.

While Amazon (AMZN) has been one of the obvious beneficiaries of the lockdown e-commerce boom, Vitrano is looking at the former bricks and mortar retailers that have been quick to adapt to the dramatic change in shopping habits have benefited.

She points to wholesaler Costco (COST),which also has outlets in the UK, and is assigned a wide economic moat by Morningstar analysts. It now offers shoppers the chance to order online and pick up the goods without leaving their car. She also rates cosmetics retailer Ulta Beauty (ULTA), which offers a one-stop-shop for perfume, hairdressing products and makeup to retail and professional customers.

Despite the obvious challenges faced by the travel industry, she also likes certain names in the sector such as Booking.com, which should survive the current crisis. “The online travel agency has a variable cost structure and balance sheet to support them even if travel restrictions last several years,” she says.

The tech boom has undeniably triggered a domino effect that will affect all sectors in time. Bowers says the key will be finding companies across a range of industries that can shake-up their sector. “If we look out over the next decade, the big opportunities are going to come as this digital transformation wave sweeps through all the other industries,” he says. The race for a Covid-19 vaccine is just one example of how quickly a sector, which was once staid and predictable, can change in response to a crisis.

With that in mind, he has been taking profits from his investments in the likes of Apple and Amazon and using the proceeds to increase his holdings in financial and healthcare stocks. “We are moving significantly faster than we ever have before,” he says. The lesson from tech, that huge leaps and bounds can be made in short time periods, has changed expectations for all industries.

Millions of Americans scrape by after benefits expire: 'I lost everything'

Thu Aug 20 , 2020
A single mother of three children, Sandra Bivin of Denver, Colorado, is now being forced to try to survive on $58 per week on unemployment since the $600 per week expanded unemployment benefits expired on 26 July. It is not easy. Before the pandemic hit, Bivin worked as a driver […] 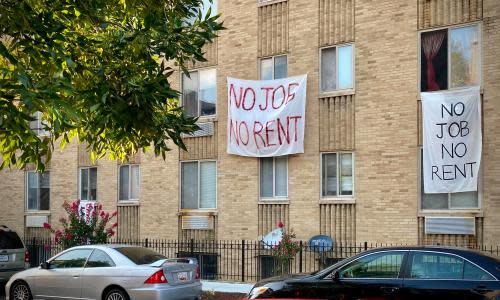