Some people might find these uncomfortable places to stay – but what do we do about it?

Dawn is the most beautiful moment in the Caribbean day – it is still, quiet and cool. And with the time difference, for your first few mornings in the islands you wake early. It’s how I find myself sitting on the stone terrace of the Great House, a new plantation house hotel in Antigua.

The shell of a stone windmill stands behind me and ahead the crowns of neem trees and mahoganies float on the gathering pink sky. Sounds carry across the lagoon: a cockerel call, and the serial smack of chopped firewood. These are the sounds of West Indian life, not the breaking waves of the beach. Almost all plantation houses were set inland and they offer a completely different experience of the ­Caribbean.

Two centuries ago, however, the atmosphere would have been anything but peaceful, as the terrace was at the heart of a sugar estate. The windmill would have been turning, crushing cane carted from the fields, the juice then sluiced into the boiling house. All this would have been achieved by chain-gangs and slave labour. Plantations were places of systematised brutality and extreme suffering. All in pursuit of profit. It occurs to me that some people might find these uncomfortable places to stay – especially given the heightening of our consciences by the Black Lives Matter movement.

But what do we do about it? In other fields, colonial countries are atoning for the past. Glasgow University, in respect of historic donations resulting from the slave trade, recently donated £20 million to fund a joint programme with the University of the West Indies to work on postcolonial development issues in the Caribbean. What should we think in the case of hotels? And how do the owners and islanders themselves feel about their past?

Two estate houses, in Antigua and Barbados, have recently been given a new lease of life as hotels, but the island that has developed the most of its plantation house hotels is actually tiny Nevis, 50 miles from Antigua. On a mountainous island just six miles by eight there are four or five of them, each with a central area around which rooms in cottages are scattered in hillside gardens. There are probably a dozen elsewhere across the Caribbean; most are on former sugar estates, but some grew coffee or even cocoa.

As small hotels, they offer both an ideal escape for independent travellers and a familiar welcome. The house and grounds become your own, and you get to know the staff, the other guests if you want to – some consciously have a house party atmosphere. And as traditional buildings, they are also heart-stoppingly pretty.

The Great House is one of the oldest Caribbean homes I know. It dates from around 1670, just 40 years after the island was settled by the English. I am amazed to discover that the stone walls behind me were actually quarried in the Cotswolds – in the 1600s Bristol was England’s main port after London and it supplied the West Indies – the Great House was designed there, its stone cut and faced and shipped to Antigua.

Inside, it feels similarly traditional. Opened by the family that has owned the property since the 1950s, the Great House still has many of its original furnishings – some bought from the Chippendale catalogue 250 years ago – mahogany tables and upholstered dining chairs, four-poster beds, even a lovely old travelling chest. The drawing room is decorated with pewter jugs, porcelain figurines and Chinese vases with “bouquet” sconces of hurricane glass.

There is a deck for early-morning yoga, but instead, at 7.30am, I accompany general handyman Danny on a walk to Betty’s Hope, a restored sugar factory on a nearby estate. The rolling landscape once blanketed with sugar cane is now given over to yam, cassava and monkey peas, and hedges are lined with mango, guava and guinep trees.

Danny points out plants in what appears indistinguishable bush; neem will keep the flies off, children eat the sour yellow fruit of the dums bush; tisane is used for tea, and wild tamarind as feed for cattle. At Betty’s Hope you see the industrial scale of a plantation. Two huge stone windmills, with bulky machinery to crush the cane, dominate the hilltop. The remains of the boiling house are close by and scattered around are storage and distillery buildings. By nine it is appallingly hot; I can barely imagine working days in the sun.

So it’s a relief to be back on the terrace, and to move around the garden, from one hidden spot to the next, during the day. The Great House has four traditional bedrooms in the main house, but if you prefer something less antique, there are four brand-new rooms in cottages on the grounds. A small spa is set in an outbuilding. And what about the beach? They’ll run you down there for the day.

It’s not so different from staying in a villa, except there is a little more company over dinner (communal ­dining is on offer). Owner Gabi Howell says: “Guests arrive with an intention to explore, but after a day or two they relax into life here and some don’t even leave the property…”

Where the Great House feels remote and rural, Sweetfield Manor in Barbados is in Bridgetown. Interestingly, it probably never was on a plantation. It was built by a merchant and ship chandler on one of Barbados’s coral ridges, enabling him to see which ships had put into harbour.

It is, however, a classic Bajan plantation house, with a two-storey stone core dressed in white render and a green tin roof and window shrouds, which is skirted by a single-storey “gallery”, a sort of enclosed veranda whose outer wall is made of louvres; these are held at angles on pegs to keep out the sun but encourage a through-flow of air. The gallery gives into a drawing and dining room through wide, flattened arches and large doorways. Modern art creates a more contemporary feel: less house party than busy, boutique hotel.

Sweetfield Manor is different in another sense too. It is part of the Bajan scene – one evening, the courtyard restaurant had a singer entertaining the local art and fashion crowd with a catwalk show. Eventually I hid myself away – the gardens that descend to the lawn and ridge are full of nooks sheltered by green profusion, with hidden tables for dinner, corners by the pool.

Barbados has always had plenty to explore, and it is strong on the other half of the Caribbean plantation equation, rum. Some claim that the drink was invented on the island. Either way, many rums are produced here, and there are several visitor centres and factories. The one with most charm is at St Nicholas Abbey in the north of the island. It was never an actual abbey, but a large estate house, one of just three Jacobean houses left in the Americas (a second, Drax Hall, is also in Barbados; the third, Bacon’s Castle, is in Virginia).

The stone for St Nicholas Abbey was quarried locally, but it too was built from plans sent out from England, in about 1650 (rather sweetly, they included fireplaces). You arrive via an alley of lustrous green elephant ear leaves above which stand vast, agonised mahoganies. Eventually you turn to face a facade with three curled gables.

Inside are wooden floors and six foot of cedar panelling, crystal chandeliers and mahogany tables and chairs made on property. Tours can be made by the guide, and today Judy sashays through the dining, drawing room and study, bringing it all alive – pointing out the chandelier made of shells, the radio that (yes, really, to general hilarity) has to warm up before it works, and an original Thomas Crapper.

We watch an extraordinary film of the plantation in 1935, with scenes of workers cutting cane, coopers forging carriage wheels and the windmill at work. Nowadays St Nicholas Abbey grows 30 acres of sugar cane and uses its original machinery to make its rum – you see the fermentation vats and copper stills in which the rum is distilled and the stacked barrels in which it is aged. Finally, there’s an opportunity to buy. Judy again: “Rum, you see, is like men… and women… It gets a little smoother… and a little more expensive… with age…”

On the way home I opt for the traditional rum punch and the sunset, where I find myself musing on that feeling of discomfort. We shouldn’t forget history, but haven’t things moved on? And tourism is such a key Caribbean industry; a crucial foreign exchange earner for a region that has to import so much. I talk to Dawn-Lisa Smith, a Bajan event producer who has a special interest in history and culture.

“Plantations and slavery are part of our history,” she says. “We may not celebrate or love that past, but the story needs to be told, so that visitors to the island and our children understand our history and culture, and the same mistakes are never made again.

“There’s always some resentment between the races in a society built out of slavery, but it doesn’t hold back the average Bajan. We’re not afraid of history and we do visit these places. Besides, we’re empowered enough nowadays that we could, if we have the money and inclination, buy a plantation house and decide to live in it or to knock it down as we please.”

For the latest advice on Caribbean visits, see gov.uk/foreign-travel-advice

A Relais & Chateaux hotel ranged in grounds around an old estate and windmill. There are 19 rooms and suites decorated in contemporary style and a beach club on Pinneys Beach. Horatio Nelson married Nevisian widow Fanny Nisbet on Montpelier estate in 1787. (001 869 469 3462, montpeliernevis.com)

Encircling a hilltop high above Kingston, Strawberry Hill has a modern take on Jamaican plantation style – steeply pitched shingle roofs on white wooden walls, funky gingerbread trim and verandas with a stupendous view. The hotel is owned by music producer Chris Blackwell, and gold discs and photographs of musicians adorn its walls. (001 876 944 8400, strawberryhillhotel.com)

A cocoa plantation (still working) with modern and traditional-style cottages hidden in gardens around a 100-year-old estate house, and a view of St Lucia’s spectacular conical mountains, the Pitons. (001 866 773 4321, lahaut.com)

A collection of brightly coloured gingerbread cottages with red tin roofs set around explosive gardens above a lovely house from the mid-1700s (one of the oldest wooden houses in the Caribbean). Fantastic views, and a very friendly, informal air. (001 869 469 3477, hermitagenevis.com)

Escape Rooms in an At-Home Era? Here’s the Key

Thu Nov 5 , 2020
Hours after sunset, our team had finally decrypted the poems and exposed the nine oracles. With the traitor in our midst unmasked and the guardian revealed, the portal to the library began to open. Then my computer crashed, and I missed the climactic moments of the Secret Library, an online […] 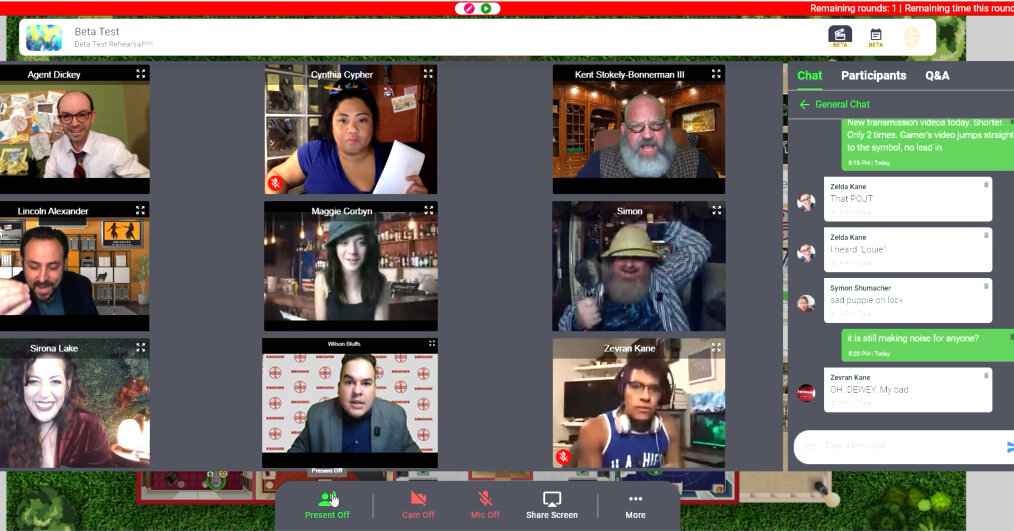