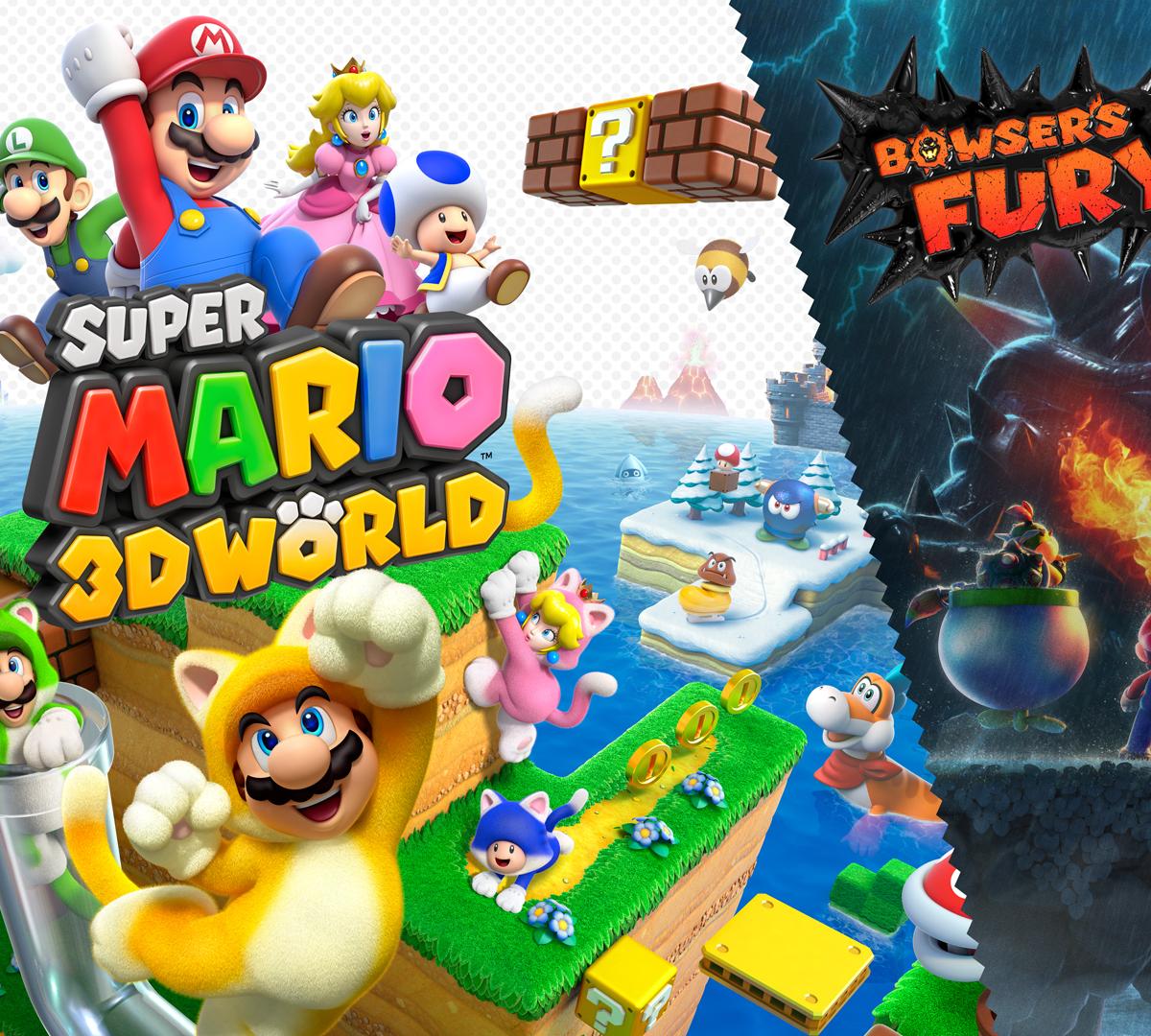 Super Mario 3D World + Bowser’s Fury is the latest headline offering from Nintendo as it celebrates the 35th anniversary of Super Mario Bros.

This isn’t just a rehash of a little-played Wii U game brought forward to entice a new audience. The Bowser’s Fury part of the game is completely new, giving the package a “two-for-one” feel.

Super Mario 3D World was an instant classic on Wii U in 2013 (hence the 93 Metacritic score), and Bowser’s Fury is a possible hint at the future of Mario, so to say it’s an appealing package before even diving into the details is an understatement.

Super Mario 3D World remains a stunner in the graphics department, just as it was all those years ago. Nintendo says the visuals have received a minor boost with this port, but it’s almost hard to tell the difference.

Truth be told, it looks glorious, and one could probably be convinced it was originally a Switch release. Nintendo games just hold up in this department. And the bonus here, of course, is that the game is fully available as a handheld experience thanks to the Switch’s functionality.

Which is to say, the game is as colorful and visually popping as players will recall, and it’s one of the more impressive-looking games on the Switch. The environments are packed with details, the characters are expressive, and the locales, as always in a Mario game, vary greatly and stick with players long after completion.

There is a caveat, though, as Bowser’s Fury is clearly a stressful, boundary-pushing bit of game for the Switch, especially in handheld mode. The graphics and resolution just don’t hold as well there, and the framerate takes a hit. But trading off graphics and frames for the ambition of the project while on the go is hard to knock too much.

At its heart, this is still the classic 2D/3D hybrid fans loved all those years ago. It always existed in a bit of purgatory after major releases like Super Mario Galaxy, but it holds up well as one of the best linear 3D Mario games ever.

Players still uncover creative items like the cat suit, which opens up the well-crafted worlds in interesting ways because it lets characters climb on walls. Each character still has their quirks, with Peach floating farther, Luigi jumping higher, etc.

One thing hardcore players from the Wii U release might notice quickly? Character speed has been given a nudge. It doesn’t dramatically change how things play, but it’s just enough to make the experience feel even better. Otherwise, slight UI tweaks are the noticeable differences compared to the original.

But the thoughtful design of the original remains in all its glory. It’s a tried-and-true homage to the classic Mario games and stands in stark contrast to the grander experiences of things like Super Mario Odyssey. The levels are mostly linear, perspective is a tool often used to create challenges, and the escalating nature of the difficulty and obstacles serves as a gentle guiding hand as players go from learning to jump to becoming experts.

It’s not hard to see why the game was so well-reviewed all those years ago. Like all first-party Mario efforts, this stands the test of time. In fact, the update happens to perform even better, with the developers having the benefit of hindsight to speed things up just enough to make the game feel smoother for players of all experience ranges.

The baseline Super Mario 3D World story is the usual all-ages stuff—Mario and the gang stumble upon something, Bowser shows up and kidnaps Peach and the adventure begins.

It’s a fun romp, and for those who missed out on the Wii U offering, the game manages to weave in some of the most memorable live-action moments and boss fights of the last few decade’s worth of Mario games.

Bowser’s Fury, though, is a whole different conversation.

Mario drops into a new world, stumbles on to large footprints and away things go. Like the base game, let’s just say some of the things players will encounter, especially late, are incredible.

The separate experience is more of an open-world game in the Odyssey sense, with it feeling likewise in scale to a kingdom in one of those recent games. Gone are the linear levels. In their place, players are free to explore different sections of the map with their own names. These varied locales offer their own sets of challenges and things to collect.

At its heart, even Bowser’s Fury is still a collect-a-thon, with blockades in the form of puzzles, hidden items and skill checks. It’s refreshing to go from the base game to the open-world element and tackle the challenges in a different manner, even if the camera controls feel a little too slow.

Clearly, the new mode doesn’t shy away from trying new things. Weather turns sour in the world, and Bowser is a giant big-bad (no, really, like Godzilla huge) who must be avoided now—an interesting twist on a strong The Legend of Zelda: Breath of the Wild open-world element. Players can use Bowser’s appearances to their advantage, of course, but the fundamental way the world suddenly shifts each time he pops up makes for a welcome change to the tried-and-true formula.

Not that Bowser’s Fury doesn’t mind dipping into the greatest hits well, either. Bowser Jr. from the classic Super Mario Sunshine is there to help (and available as a multiplayer option), and both he and Mario are—you guessed it—cleaning up the area just like in the Gamecube release.

Overall, this fresh slice of game is a bit like a huge body of water, albeit shallow. The space to mess around in is huge, but the experience as a whole doesn’t last very long. Still, it’s fun, and viewed through the lens that it’s more of an experiment that could get turned into a fully-fledged experience down the line softens the blow provided by its brevity.

If Bowser’s Fury is a bit of modernization for the franchise, so too are some of the ways to get more than one person involved at once. Multiplayer is still a blast, too, with up to four players on screen at once creating a bit of chaos that generally sways into hilarity.

It’s not restricted to couch co-op, either. Players can create and make a room online from the world map. Only the host of those rooms makes progress, but something is still better than nothing, especially when it comes to Nintendo’s track record with online multiplayer.

Speedrunners have had a long, long time to tear through Super Mario 3D World.

And the community is going strong enough despite the novelty of the launch system. The current best-ever run in the any-percent category checks in at just over one-and-a-half hours, and a 380-star run is now right at the four-hour mark (a 100-percent run takes seven to eight hours).

That said, Super Mario 3D World was always a little under the radar as a speedrunning game in part because of the launch system, but also because of its somewhat-punishing nature. It’s a skill-based run, with little in the way of randomness to assist or impede.

That means a lot of it comes down to skipping things like dialogue, level memorization and even exploits. The most notable facet of most runs is the cat suit momentum dash, which isn’t a typical sort of movement animation. That requires the suit and the ability to cancel a dash after a jump repeatedly to move through levels faster.

But, at first, simple route-planning and practice on tricks to each level is the proper way to go. And given the uptick in character movement speed for this release, there’s always a chance for better routes, if not movement exploits, for runners to discover in time.

Even though it is mostly a port, Super Mario 3D World + Bowser’s Fury is a surprising offering and one of the more robust packages available on the Switch. Given the console’s incredible library so far, that’s saying something.

That Super Mario 3D World was an absolute classic upon release isn’t much of a secret. But something as simple as a slight uptick in speed manages to make it feel that much better. While the online portion of the multiplayer isn’t perfect, it’s still one of the best local multiplayer Mario games ever.

Bowser’s Fury is a fun, albeit short diversion of a mode that might offer a big hint of where Mario’s game design heads next. And if the brief blast of innovation gets expanded upon properly, the gaming medium is in for a real treat.

Add in the backdrop of the Switch’s handheld capabilities, and this old-new package really shines as a standout.