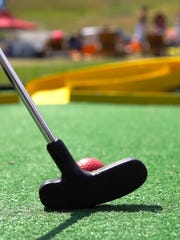 Construction is expected to start this summer and developers hope to open at Gilbert’s Crossroads Park around the end of the year. (Photo: zefart, Getty Images/iStockphoto)

Outdoor go-karts and miniature golf are coming to Gilbert’s Crossroads Park, much to the displeasure of some nearby residents.

Santan Adventure Park is moving forward as Gilbert’s Planning Commission approved designs for the project on Wednesday after about three hours of presentations and public comment from upset neighbors.

The adventure park, on the corner of Santan Village Parkway and Knox Road, will expand to include a phase two in the future, but those plans haven’t yet been drawn. 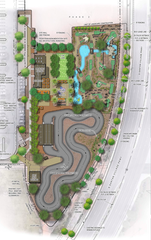 An overview of the first phase of the Santan Adventure Park coming to Crossroads Park in Gilbert. (Photo: SAP Holdings LLC)

Neighbors came out to the planning meeting to oppose the project, airing concerns about potential noise levels from the go-karts, fumes from the gas engines, light pollution, sinking property values, increased traffic, parking, late hours of operation and other worries. The park is adjacent to two neighborhoods: Cottonwoods Crossing and Greenfield Lakes.

“This is a great project for Gilbert, but a horrible location,” nearby resident Randy Nelson told the planning board. “These projects do not belong in a neighborhood.”

Developer Ben Cooper, a longtime Gilbert resident, maintained that the project will be a good neighbor and will provide “family-friendly, wholesome” fun in Gilbert.

Thank you for subscribing. This premium content is made possible because of your continued support of local journalism.

Construction is expected to start this summer and developers hope to open the park around the end of the year, Cooper told The Arizona Republic.

The go-kart track, the most controversial piece of the plan from neighbors’ perspective, is allowed under the site’s zoning and lease agreement, which were approved long before this week’s meeting.

Although neighbors felt blindsided, plans for such a park have been several years in the making.

The parks department asked developers to submit plans for recreation options on that part of the park back in 2015. The public process began with a neighborhood outreach meeting in late 2016, according to town planner Stephanie Bubenheim. 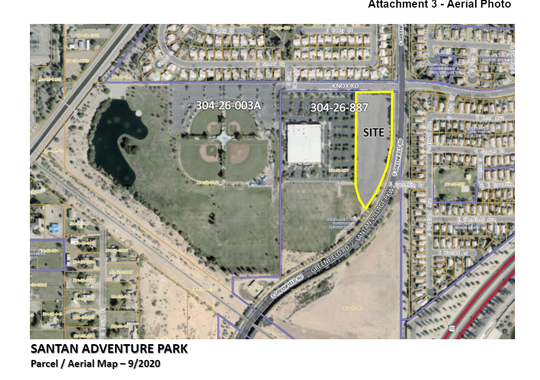 An aerial view of Santan Adventure Park’s location in Gilbert’s Crossroads Park. The go-kart and mini golf park is expected to open around the end of the year. (Photo: Town of Gilbert planning documents)

The Town Council approved a lease with the developer in March 2017 that allow for these planned go-kart track and golf course. The project was stalled by funding until plans were submitted to the town in late 2020, Bubenheim said.

Other allowed uses for the property according to the town’s lease agreement include: an outdoor maze, a bungee trampoline, a climbing wall, a laser maze, batting cages, a ropes course, a skate or bike park, bumper boats or cars, a carousel and a zipline. Some of that could be in the second phase.

The planning board’s purview for this case was just in the design, not in the uses of the property, Chair Carl Bloomfield said during the meeting. The already-approved lease agreement allows for the go-karts and mini golf course, so the issue was just whether the board would approve the design plans.

The Planning Commission vote was 5-2 to approve the project, with two commissioners voting “no” over concerns that the noise study was hypothetical and that the plan did not have enough sound mitigation like more landscaping or a low wall to block go-kart noise.

“We are grateful for this week’s formal approval of our design, which is in keeping with the Town Council’s approval of our attractions over four years ago,” Cooper said in an email.

Santan Adventure Park is now a done deal unless the Planning Commission’s decision is appealed to the Town Council within 10 calendar days of Wednesday’s approval, according to the town.

Because it was a design review case, the Planning Commission made the final decision and the case does not have to go to the Town Council for a vote.

An appeal could be made by anyone “aggrieved by a final decision,” a Town Council member, the town manager or the planning manager. It costs $490 to file an appeal of a design review decision to the council, according to a town fee chart.

Neighbors said not in my, or anyone’s, backyard

About two dozen residents from the Cottonwoods Crossing and Greenfield Lakes neighborhoods spoke in person or over the phone at Wednesday’s meeting, nearly all strongly opposed to the project.

Most of all, residents were concerned about noise from the go-karts.

They remained unconvinced by a noise study presented by an outside company that said residential noise levels could increase by one dBA, a sound measure based on human hearing, and that it takes three dBA to notice a difference.

Town staff and commissioners said that if noise becomes a problem once the go-karts are up and running, they can file complaints with the town and the developer will be cited if it’s outside the town’s noise ordinance.

Some opposed to the project created an online petition with more than 500 signatures on Wednesday to stop the park from coming in and “preserve quality of life and home values in Gilbert.”

Sandra Avery, who lives in Cottonwoods Crossing, said Crossroads Park is not the right place for this type of project.

She said people have been saying they are crying “NIMBY,” or ‘not in my backyard,’ but the Gilbert woman said she wouldn’t want this in anyone’s backyard.

Nelson told the planning commission he researched outdoor go-kart tracks in Arizona and other Southwestern states and found no recent similar examples of projects approved near housing.

He said he lives about 200 feet from where the track will be and is concerned the go-kart track will dictate his sleep hours. The park will be allowed to operate between 8 a.m. and 11 p.m. Sunday through Thursday and 8 a.m. to midnight Friday and Saturday.

Other residents said they were worried about increased traffic around their neighborhood, the lack of available parking at the park and the concern their homes will now be harder to sell.

Cooper, the developer, said added sound will be minimal and landscaping will help enclose the park.

He offered to form a group for park tenants, park users, neighbors and town staff to regularly meet and discuss Crossroads Park and any issues that are arising.

“We want to be good neighbors. We are neighbors, we live in Gilbert, we’re invested here,” Cooper said at the Wednesday meeting.

Have a story about Gilbert? Reach the reporter at [email protected] or at 602-444-4282. Follow her on Twitter @alisteinbach.

Game and Fish Department unveils mapping project | From The Wire

Sat Apr 10 , 2021
POWELL — The Wyoming Game and Fish Department quietly unveiled a new online mapping project last month, identifying and explaining every priority habitat issue in the state. While the news may have gone unnoticed by most, the monumental effort will make researching Wyoming’s most important conservation issues a breeze. The […]