POWELL — The Wyoming Game and Fish Department quietly unveiled a new online mapping project last month, identifying and explaining every priority habitat issue in the state. While the news may have gone unnoticed by most, the monumental effort will make researching Wyoming’s most important conservation issues a breeze.

The project took about 18 months to complete but sets the department up to quickly update future statewide habitat plans in a way that is much more inviting to the general public. Moving the data to online maps was the brainchild of Geographic Information System Analyst Erica Cirigliano.

The data was always available, Cirigliano said, but never in such a streamlined way.

“It’s an effort to get the public engaged with this plan, through the map, and showcases all this hard work that gets done,” she said.

Each habitat identified, both land and water, represents where and why some habitats are considered priorities, showing significant habitat issues the department intends to work with partners and landowners to address by regional terrestrial and aquatic habitat, fisheries and wildlife biologists and game wardens. Other agencies, like the Bureau of Land Management and the National Forest Service were included in the project.

Even non-governmental groups such as Trout Unlimited and Pheasants Forever have added information to the data set.

The plan is based on what land managers call a “holistic approach” to habitat management, according to a recent press release. That means it integrates management and various land uses through collaborative efforts with the general public, conservation partners, private landowners and land management agencies.

“In the past, our ability to transparently convey habitat priority areas was constrained and confined to PDFs hidden on the website. These new online maps suddenly make it easier for the public to see and hopefully understand what we’ve been doing all along,” said Paul Dey, chair of the agency’s Habitat and Technical Advisory Group.

“Quality habitat is essential to ensure a future of healthy and abundant wildlife and fish populations in Wyoming,” said John Kennedy, Game and Fish deputy director of internal operations. He called the plan “a single, unified roadmap for Game and Fish to prioritize projects that improve habitats across Wyoming.”

The new system simply combines volumes of important habitat data and boils it down in a fun-to-use way on the online map, with all the reports available with a click of your mouse. Habitat is the starting point for most wildlife conservation efforts. If there’s no place for the species to be, how can they be conserved? But it’s much harder to pitch the protection of habitat versus individual species — such as grizzly bears, black-footed ferrets or sage grouse.

“Making a case to the public for habitat conservation can be incredibly difficult. Mainly, I think, because there are so many complexities,” said Alan Rogers, communications director for the Wyoming Outdoor Council. “Consider the sagebrush ecosystem — millions of acres, hundreds of plant and animal species, being impacted by everything from invasive grasses to wildfire to industrial development. Animals are easier for people to understand, or assume we understand, and our response to them is very emotional.”

People naturally form connections to animals, either to individuals like a family pet or charismatic wild species like eagles or moose.

“Wildlife are loaded with symbolism. We see certain species as ‘good’ or ‘noble’ and worthy of our respect and protection,” Rogers said.

Wildlife is also easy to quantify. Scientists and conservation advocates can effectively communicate this information to the public, which can plainly see if a population is in decline or on the rise, because those numbers are tracked over time and simple to understand.

“Experience tells the public that if a population is shrinking, something is wrong and it’s probably our fault,” Rogers said.

Habitat, on the other hand, is not so simple.

“It sprawls across state lines, land management jurisdictions, private agricultural lands, areas developed for oil and gas, timber or mining, and even people’s backyards,” he said.

It also creates the potential for all kinds of disagreements about how the land should be managed.

“The kind of compromise needed to protect habitat isn’t always easy when all the stakeholder groups have their own interests to consider,” Rogers said. “It can be done, and Wyoming has its own history of successes, but it requires strong leadership and usually a lot of time.”

“I think the reason we’re seeing so much public interest and involvement in corridor protections is because scientists were able to create such great graphic representations of exactly where these herds are spending their time,” Rogers said.

And that is the dream of Dey and Cirigliano: to map out the five-year plan in a way that will help everyone understand the importance of habitat and the fight to protect Wyoming’s natural resources.

“Putting all these priority areas into the online database was a heavy lift for folks. But I think the extra effort this time around will save us work next time and really has the benefit of centralizing everything so that everybody can review it and communicate about it easily internally,” Cirigliano said.

The public can interact, easily researching the data they’re interested in.

“They can’t tailor a static map to their own interests. But with an interactive map, they can really filter information out and look around the state,” Cirigliano said. “All the maps are right there in front of them in one place, that just gives them a lot more data a lot quicker. And I think that will be much more interesting to them.”

For the first time, the plan includes the latest-available science on recent and predicted climate changes. It considers the consequences of potential changes for aquatic and terrestrial habitat management in Wyoming.

This revision also incorporates recent information on species distributions and seasonal habitat delineations, updates and improves priority areas, clarifies how proposed habitat projects will be ranked and provides a suite of habitat actions to be pursued over the next five years.

Sun Apr 11 , 2021
BETHEL — In recent years, the revitalization of the village that grew up around this town’s railroad depot has begun to build up a head of steam. But there are impediments: For example, the entrances to a row of commercial buildings along Main Street sit a step or two, or […] 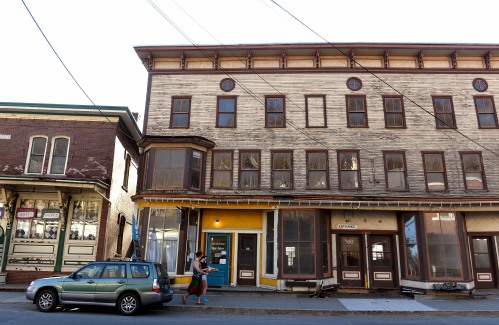