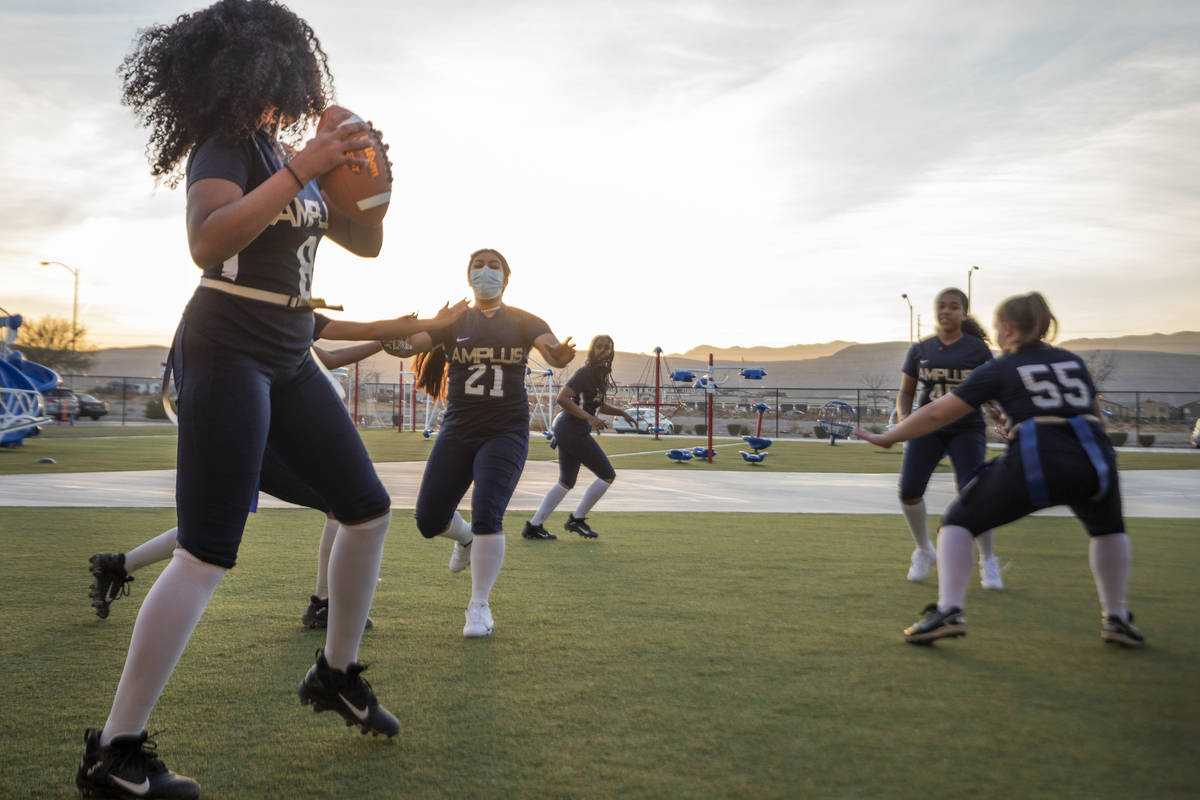 When Amplus Academy first announced it would start a flag football program, the response was anything but overwhelming.

Coach Ariana Grgas said one player showed up in person and two virtually to the first meeting. But word quickly spread, and a team of 12 was formed.

On Friday, the Archers will make history as they play their first game against SLAM! Nevada at 4:30 p.m. on Field No. 6 at the Russell Road Recreation Complex.

This will be the first high school sporting event in the state since COVID-19 shut down all NIAA activities in March, ending a 10-month drought.

“We’re all excited, but of course we are a little nervous,” sophomore captain Karina Hudzenko said.

Being part of the game that brings back high school sports was the source of consternation at first for some Amplus players, but they have come to embrace the situation.

“When I found out the news I was super nervous. I was very honored, but the nerves overtook everything,” Grgas said. “I told the girls, and it was the same reaction. Heads down, like they didn’t want to be the first. But there’s been a huge shift in the team where it went from dreading the game to we’re going to make our families, our school and ourselves proud.”

This will be the third year of flag football for SLAM! Nevada, and coach Taylor Velarde is well aware of what Grgas is going through trying to build a program.

“We were Amplus a couple years ago,” Velarde said. “We had never played before, but you never know what you’re facing in a first-year team. They could have a lot of good athletes. When you have good athletes, whether they really know the game or not, they can make things happen.”

Amplus and SLAM! Nevada are two of only five schools playing varsity flag football this year. The other three are Pinecrest Academy Cadence, Pinecrest Sloan Canyon and Moapa Valley.

While both Amplus and SLAM! Nevada want to put their best foot forward Friday, winning is not the most important thing to either.

“I feel like a lot of us are out there to have some fun,” SLAM! Nevada senior Austynn Martinson said. “We would love to go out there and score a bunch of touchdowns and pull a bunch of flags and win games, but we want to enjoy the experience of playing.”

That social aspect of high school sports has been missing since the shutdown in March.

It’s been especially tough for those like Tiana Moore, who enrolled in Amplus after spending her first freshman year at Desert Oasis. Virtual learning had made it difficult for Moore to connect with her new classmates, so she jumped at the chance to join the flag football team and has been named a captain.

“I was just focused on my online learning, but when I found out there was flag football, I thought I could meet new people, learn some new things and have a good time,” Moore said.