The popular Greek island of Mykonos is pushing back against new lockdown restrictions that see bars and restaurants forced to close at midnight.

“Everyone has come [to Mykonos] to eat their food, to entertain themselves, swim in the sea. At this moment, we are fooling them,” bar owner Stavros Grimplas told the Associated Press. “We told them ‘come to Greece’ and Greece has shut down.”

The new measures to stem a rising number of coronavirus cases on the islands and across the country come as Greece is rumoured to be next to be added to the UK’s quarantine list.

But businesses on Mykonos say the rules should not target legitimate business but illegal parties instead. Owners have signed an angry letter accusing the government of wanting “to render us mere spectators of the destruction of our businesses.”

They also demanded to know the data that prompted that decision and asked why the government is not stopping the “illegal parties … that will blow up the pandemic.” The parties are held in isolated villas around the island; invitation is strictly word-of-mouth.

The government says it won’t back down from the measures and has extended them to much of the country. From Monday, the midnight closing hours extend to the capital, Athens.

On the home front, a kite festival. Of course.

And the turbulent weather in North Tyneside gave the event a lift.

‘Cruise will not come back all at once’

The heads of some of the world’s biggest cruise lines have stressed that cruises won’t make a rapid return, reports Benjamin Parker.

Instead, those desperate to get back on the water will see a “gradual ramp-up of sailings”, according to Frank Del Rio, the president of Norwegian Cruise Line Holdings.

This echoes the plan for Carnival Corporation, the world’s biggest cruise operator. Chief executive Arnold Donald said that “clearly cruise will not come back all at once”, confirming that they intend to resume operations with a small percentage of the fleet”. Among Carnival Corp’s brands are P&O Cruises, Cunard, Princess Cruises and Seabourn.

Chairman and CEO of Royal Caribbean Group, Richard Fain, said: “We will not rush to return to service.”

At present the Foreign Office is advising against all travel on ocean-going ships, although river cruises are exempt. In America, a non-sail order is in place for ships with a combined capacity of 250 or more passengers and crew.

See our full list of when each cruise line is due to restart sailing, and how to get a refund, here.

The price of quarantine

A nominated “hero of lockdown” has been forced to pay £300 to fly home from France to avoid a 14-day quarantine.

PA has the details:

Samuel, a homelessness outreach support worker who did not want to give his surname, paid over five times the price of his original plane ticket to return to the UK after it was announced that people arriving in the UK from France after 4am on Saturday will be required to self-isolate.

Samuel, 25, explained that he paid the “astronomical” price as he is unable to work from home.

“As soon as we found out, we were frantically trying to get on to the Ryanair website to get me back to the UK,” Samuel told the PA news agency.

“It was a very stressful time from last night trying to get my flight booked because I needed to be home; I can’t afford to quarantine for 14 days. There was no option.”

Samuel was named a “lockdown hero” by Stroud Town Council for his work with a homelessness charity throughout the lockdown period.

He had originally paid £110 for a return flight to Bristol Airport through Ryanair, with prices surging after the announcement.

Other airlines have seen price hikes, with British Airways selling tickets for a flight from Paris to London Heathrow on Friday night at £452. The same journey on Saturday could be made with the airline for £66.

“I wasn’t expecting it, I knew that the Government were monitoring the situation, but I was under the understanding that they would give us a lot more notice.”

‘At Graceland, you’re part of something so big and so loving’

Taken to Graceland by her Elvis-fan mother, Sarah Rodrigues was strikingly moved by the King’s eternal appeal.

I could sing Blue Suede Shoes before I could tie my own laces; even so, when I woke to find my mother racked with grief on the morning of Aug 16 1977, I feared my father had died in the night. He had not – but the world had lost Elvis.

So it was hardly a surprise when, years later, Mum phoned my London flat from her home in Australia with a proposition.

“Sarah! I’ve got an ide-a! We’re goin-a Graceland! Fer yer birthday!” she sang down the line. Sorry – whose birthday?

To say that my mother is an Elvis fan is an epic understatement, but then, so is saying that I don’t speculatively eye up a mile when offered an inch. We were going to the States anyway, I reasoned, so we could start my “birthday present” in New York before continuing to Memphis, and then on to Vegas and San Francisco. Fair, right?

Where is safe to travel in Europe?

Restrictions on travel during the coronavirus pandemic should act as a pause to re-evaluate “slum tourism” – a popular option for gap year students, researchers have said.

Analysis of TripAdvisor reviews from tourists visiting impoverished urban areas in South Africa suggests they regularly misrepresent townships as places of great hope, which creates a skewed understanding of poverty.

Researchers at the University of Bath analysed more than 400 reviews for the townships of Langa and Imizamo Yethu, outside Cape Town.

Typical responses included: “We learned so much, and it was wonderful to be in the community, to experience the friendship, the solidarity, to see a new future being built”; “The level of poverty that these people live in is unbelievable. But everyone here has hope and aspirations of getting a house and work. Truly amazing people”; “There are hardworking people in the township who are making life better for themselves.”

Only four reviews remarked on water, sanitation or sewerage and two noted most residents live without toilets or running water in their homes. Overall, reviews represented residents as satisfied with their circumstances, with several reviewers even remarking the children had better lives than those from privileged backgrounds.

Lead researcher Monique Huysamen, from the University of Bath, said: “Over recent years slum tourism has thrived across the world, fuelled by growth in international travel, rapid urbanisation, and of course deepening levels of global inequality.

“While township tours, if operated by local residents, may potentially offer certain economic benefits for these communities, we found that tourists’ reviews lead to a skewed representation of poverty and its causes, certainly in South African townships.

“Issues like inadequate sanitation – a topic which has been deeply politicised in recent years – are too often glossed over, and the need for radical social and infrastructural change is invisible from their TripAdvisor reviews.

“With much international travel currently on hold due to Covid-19, now is the time to rethink and re-evaluate our own future tourism practices.”

China is seeing green shoots in the recovery of its domestic tourism sector as the coronavirus in the country recedes, raising hopes that Europe could soon follow suit.

Locally transmitted cases of Covid-19 fell to a one-month low, according to data released on Sunday by the National Health Commission, with just four infections, all in Xinjiang; the lowest since July 16.

The figure is despite a rise in travel within the country, with tour operators and agencies reporting a surge in interest. Since July 29, the most popular tourist destinations in China have received three times the number of visitors compared to the last quarter, according to China’s major online travel agency Trip.com Group.

As travel experts in the UK have suggested for the British market, China says small, specialised tour operators have seen a rise in popularity.

“People are willing to pay more for quality service and strict health and safety protection measures,” said Li Kang, head of a travel agents in Hefei.

The UK Government advises against travel to China, and anyone would returning from the country would be required to quarantine.

Contrary to popular belief, you can visit a country to which the Foreign Office (FCO) advises against travel without invalidating your insurance – you just need to contact one of the few providers willing to offer cover. What’s more, it shouldn’t cost much more than an ordinary policy.

The FCO has lifted its blanket travel ban, giving the green light for holidays to most of Europe and a few long-haul countries. But that still leaves the majority of the planet (including, as of August 16, France, Portugal and mainland Spain) off-limits.

Travelling against official government advice is not illegal, but most tour operators will not offer trips to destinations which the FCO deems unsafe – in normal circumstances, that means places like Iraq and Afghanistan; in these strange times, it means just about everywhere – and most travel insurers won’t provide cover.

But a handful of hardy travel firms have been sending intrepid Britons to FCO no-go zones for years. Wild Frontiers, for example, in business since 2002, has the likes of Algeria, Pakistan, Sudan and the DRC on its route map, and the company’s trips often feature regions the FCO would rather you avoided. So how does it find insurance for its clients?

Will Greece be next?

Greece has been mooted as the next country destined for the Foreign Office’s ‘red’ list. Here is how the pandemic is playing out there:

‘Out of Office on’

Scores of British holidaymakers travelled to France on Saturday despite a Government warning they must self-isolate on their return.

New restrictions announced this week meant arrivals from across the Channel are required to quarantine for two weeks along with travellers from the Netherlands, Monaco, Malta, Turks and Caicos, and Aruba.

Ministers set a deadline for people to return to the UK by 4am on Saturday in order for people to avoid self-isolating, sparking a frantic dash for Britons enjoying holidays on the continent.

Around 160,000 tourists are thought to have got back in time to avoid self-isolation, with 30,000 grabbing the last available seats on the Eurostar but many still set out on journeys to France.

Save summer, PM told, as Greece teeters on brink

Boris Johnson is being urged by ministers not to add any more countries to the quarantine list in order to save what is left of the summer holidays.

There are fears that if Greece joined France and Spain on the list it would collapse the “travel corridor” system that has given overseas holidays to hundreds of thousands of Britons during the pandemic.

The status of Greece was uncertain on Saturday with one Cabinet minister saying that “it all depends on the numbers”. Transport secretary Grant Shapps will review its figures on Thursday.

Ministers are privately now hoping that the position will not be clear cut enough to force a decision before the end of this month to avoid ruining holidays for tens of thousands of Britons.

One minister said: “We should be wary of doing this too precipitately – I do think that the evidence in France seems clearer cut. I hope that they don’t. If we have made a decision to allow people to have holidays then we do need to stand by it.

5 lasting changes from the COVID-19 pandemic

Sun Aug 16 , 2020
COVID-19 has completely changed life, and while many hope those changes are temporary, the pandemic has unearthed weaknesses in the status quo. After every major crisis, humanity is forced to identify those weaknesses and evolve accordingly. The 2020 pandemic, in its aftermath, is set to change life for a very […] 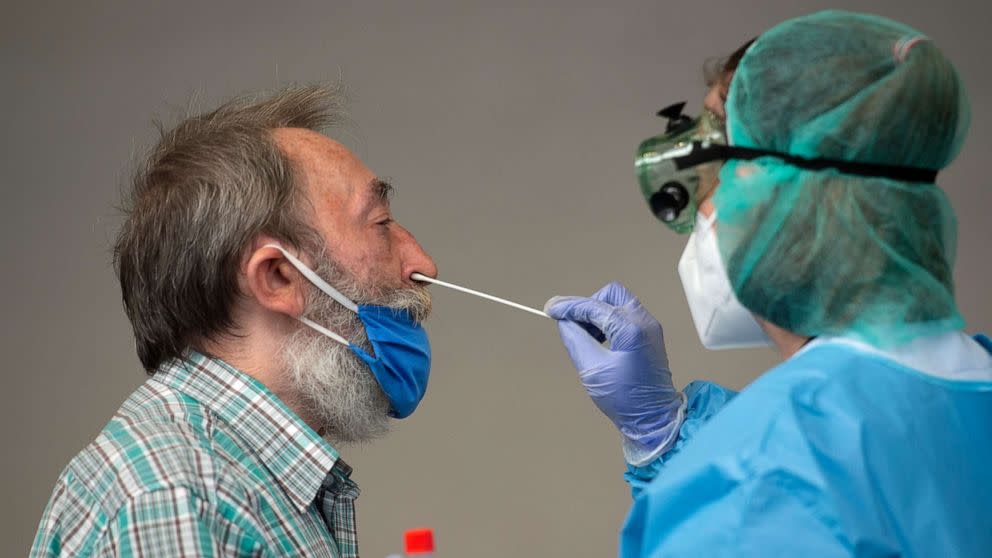