An ambitious Los Angeles County plan to lease hotel and motel rooms for 15,000 medically vulnerable homeless people is falling far short of its goal and may never provide rooms for more than a third of the intended population.

Project Roomkey has given safe haven to thousands of those it has housed. But as it enters its fourth month, negotiators have secured only 3,601 rooms. That’s only a fourth of the number needed to house all those who are eligible.

As a result, homeless officials are now changing course, saying they will continue working to find permanent housing for all those eligible, whether they first move into hotel rooms or remain on the street.

The Los Angeles Homeless Services Authority is scheduled to submit a plan to the Board of Supervisors Tuesday to house all 15,000 eligible people. Although details have not been publicly released, it is expected to seek hundreds of millions of dollars over several years for services and housing subsidies.

The goal of Project Roomkey is to provide private rooms to homeless people considered most likely to need hospitalization or die if infected by the coronavirus. To get close to the goal, the pace of new leases would have to increase dramatically. Instead, it is slowing. Only one hotel, with 91 rooms, has been added since May 20.

County officials say that housing more than 3,700 people in three months has been an “unprecedented” achievement and that they are not giving up on the goal.

“In a few short weeks, Project Roomkey has done what many thought was impossible and we are committed to this continued effort to serve the most vulnerable L.A. County residents,” said Tiana Murillo, an administrator temporarily assigned to oversee the county’s emergency housing efforts.

At least in the short term, the program has transformed lives.

For three years, Wendy Brown slept against the wall of the Cadillac Hotel, a funky 1914 beach inn in Venice once home to Jim Morrison and Charlie Chaplin. Here, tourists would pay up to $240 a night to mingle with B-boy dancers, bikini-clad skateboarders and artists steps away on the boardwalk.

Now, thanks to Project Roomkey, Brown is living inside the 47-room hotel. She and other guests have separate, airy bedrooms, bathrooms lined in green tiles, three meals a day — burritos, bowls, wraps and salads — thrice-daily nurse checks, maid service including clean towels and linens, cable television and HBO.

“I feel spoiled,” said Brown, 58, a boardwalk artist who keeps her easel, pink bike and supply trailer in her room. Brown chose a quiet room overlooking the street, but her hallway window opens on a view of a palm tree stand, rippling sand and a blue strip of ocean

“This is a really good thing for homelessness,” said Brown, who has used the time away from the shouting tweakers and cold to run several times a week and to make art — urban landscapes in acrylic paints and water colors — for online sales.

But with the slowing pace of new leases, outreach workers can’t get their clients into rooms even when they are eligible.

Tasha Tinsley, 41, who has hepatitis C, said in an interview that she’d been waiting for three weeks to be given a hotel room. Throughout the recent protests and civil unrest, she mostly stayed in her tent at 3rd and Main streets, not wanting to get in trouble with the police.

“I am trying to get my business done during the day,” she said last week before the curfew was lifted, “because at night I’m not leaving my tent.”

Gov. Gavin Newsom launched Project Roomkey in early April with a statewide goal of leasing 15,000 rooms in hotels and motels that had lost business because of the coronavirus. The Federal Emergency Management Agency agreed to pay 75% of the cost, and Newsom put in $150 million of state money.

Officials in Los Angeles quickly doubled down on the governor’s goal, saying 15,000 rooms were needed in the county after the Los Angeles Homeless Services Authority identified that many people in its database — about a quarter of the county’s estimated homeless population — who met the federal criteria for FEMA reimbursement.

The precipitous decline of travel caused by the COVID-19 pandemic made the leasing program attractive to many hotel owners as a way to sustain income while their properties would otherwise be closed. There are still tens of thousands of rooms available for lease, a spokesman for the Hotel Association of Los Angeles said.

County officials would not comment on what’s kept them from closing deals. Obstacles related to insurance and indemnity are at least partly responsible. Another factor is how quickly homeless officials can muster the services needed to manage the hotels.

After setting up 35 hotels, the Homeless Services Authority is facing a limit on its capacity, interim Executive Director Heidi Marston said.

The window may now be closing as some owners begin developing ways to instill customer confidence as portions of the economy reopen.

While tacitly acknowledging that they may never reach the goal, homeless officials are sticking by their commitment to find shelter or housing for all of those designated as vulnerable because they are 65 or older or have chronic health conditions such as heart disease, respiratory ailments or diabetes.

“We have people’s lives in our hands. It’s a matter of life or death,” Marston said in a news briefing late last month. “That is a different priority than we’ve seen in the past.”

A 467-room hotel lease negotiated by Los Angeles Mayor Eric Garcetti’s staff has buttressed the effort in downtown. But the nearly 1,000 rooms under lease there are only enough to house 6% of the estimated 17,000 homeless people living in the area in and around downtown.

The best results have been in the San Gabriel Valley, where the homeless count is comparatively low. Enough rooms are currently under lease for nearly 14% of the estimated homeless population. The bed rate trailed in other areas: 10% in East Los Angeles, 7% in the South Bay, 5% in the San Fernando Valley, 3% in West Los Angeles and 2% in the Antelope Valley.

The geographic disparities are reflected in low rates of Latinos served by Project Roomkey. A report to the Board of Supervisors by an academic team retained by the county showed that through April, 45% of those served were white and only 17% Latino, while the homeless population is 25% white and 37% Latino. Blacks made up about 33% of the Roomkey population, about the same as in the homeless population.

Marston noted the issue, saying the post-Roomkey effort must ensure that “we are recognizing and rectifying historical injustices and not just perpetuating them.”

From the outset of Project Roomkey, city and county officials have vowed to come up with an exit plan to ensure that no one temporarily housed in a hotel would be forced back onto the street.

City and county officials and nonprofits such as United Way and the California Community Foundation have been brainstorming with LAHSA on how to achieve that goal. Among the ideas under review are expanding traditional shelters, paying subsidies to make rental housing affordable and purchasing motels that are currently under short-term lease.

Joel John Roberts, the CEO of PATH and PATH Ventures, a homeless services and housing development agency, said his organization is looking for motels and hotels that the county can purchase.

But John Maceri, executive director of The People Concern, a nonprofit social service agency, expressed doubts. “I think there will be some that will be sold,” he said, “but I don’t think it’s going to be anywhere near what’s going to be needed to fill in the gap.”

Marston had said the aim was to have all 15,000 people in interim or permanent housing by April 2022. But she said she could not yet provide a breakdown of how many people would be placed in shelters, how many would receive rent subsidies and how many would be able to stay in hotel or motel rooms purchased by the city or county. Nor would she commit to how it would be funded.

United Way, which has been convening discussions on the funding, is proposing that a large portion of it come from just over $10 billion in federal coronavirus relief funds delivered to the state, county and city.

Those funds, which are restricted to coronavirus relief, could “allow all 15,000 people experiencing homelessness who are especially at-risk of hospitalization, because of their age or health conditions, to come or stay inside,” said Tommy Newman, the nonprofit’s senior director of impact initiatives.

“The only question now is whether we’ll make the choice to embrace this critical goal.”

United Way is pushing for at least $600 million to lease, buy, or build that housing by the end of the year.

The new commitment to housing all those eligible for Project Roomkey, whether they obtain hotel rooms or not, amounts to a change of strategy that prioritizes age and physical health over a complex scoring system that rated factors such as mental health, substance use and criminal record.

Though meant to be temporary, the strategy change has the virtue of being simple and morally clear, said Randall Kuhn, a professor in UCLA’s Fielding School of Public Health who co-wrote a report on the potential for coronavirus to devastate homeless camps.

“People that age should not be allowed to be homeless,” Kuhn said. “They deserve a chance to live out their time in dignity and to perhaps extend that time.”

Thu Jul 9 , 2020
BOSTON (AP) — Colleges and universities pushed back Wednesday against the Trump administration’s decision to make international students leave the country if they plan on taking classes entirely online this fall, with Harvard University and the Massachusetts Institute of Technology filing a lawsuit to try to block it, and others […] 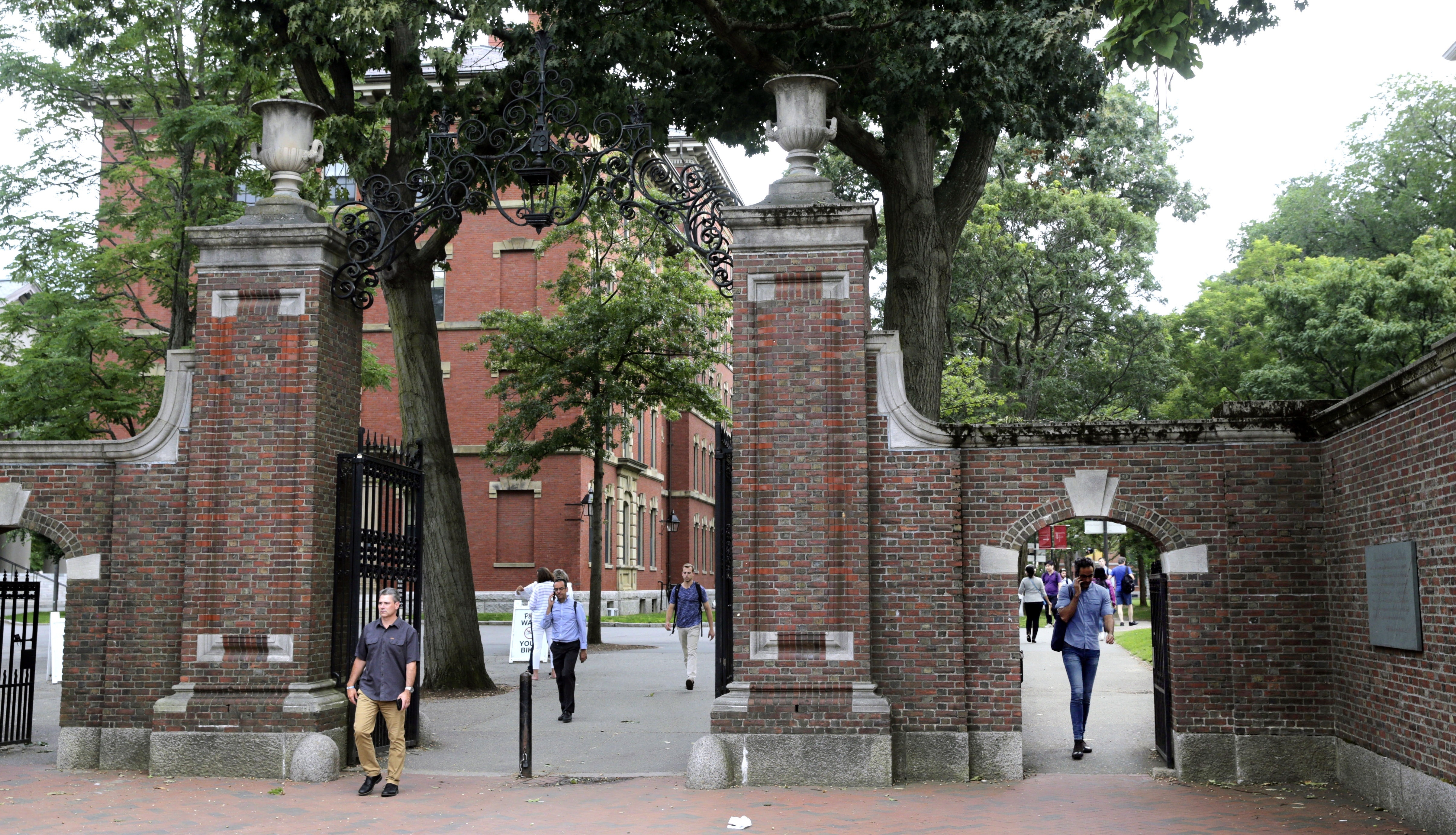