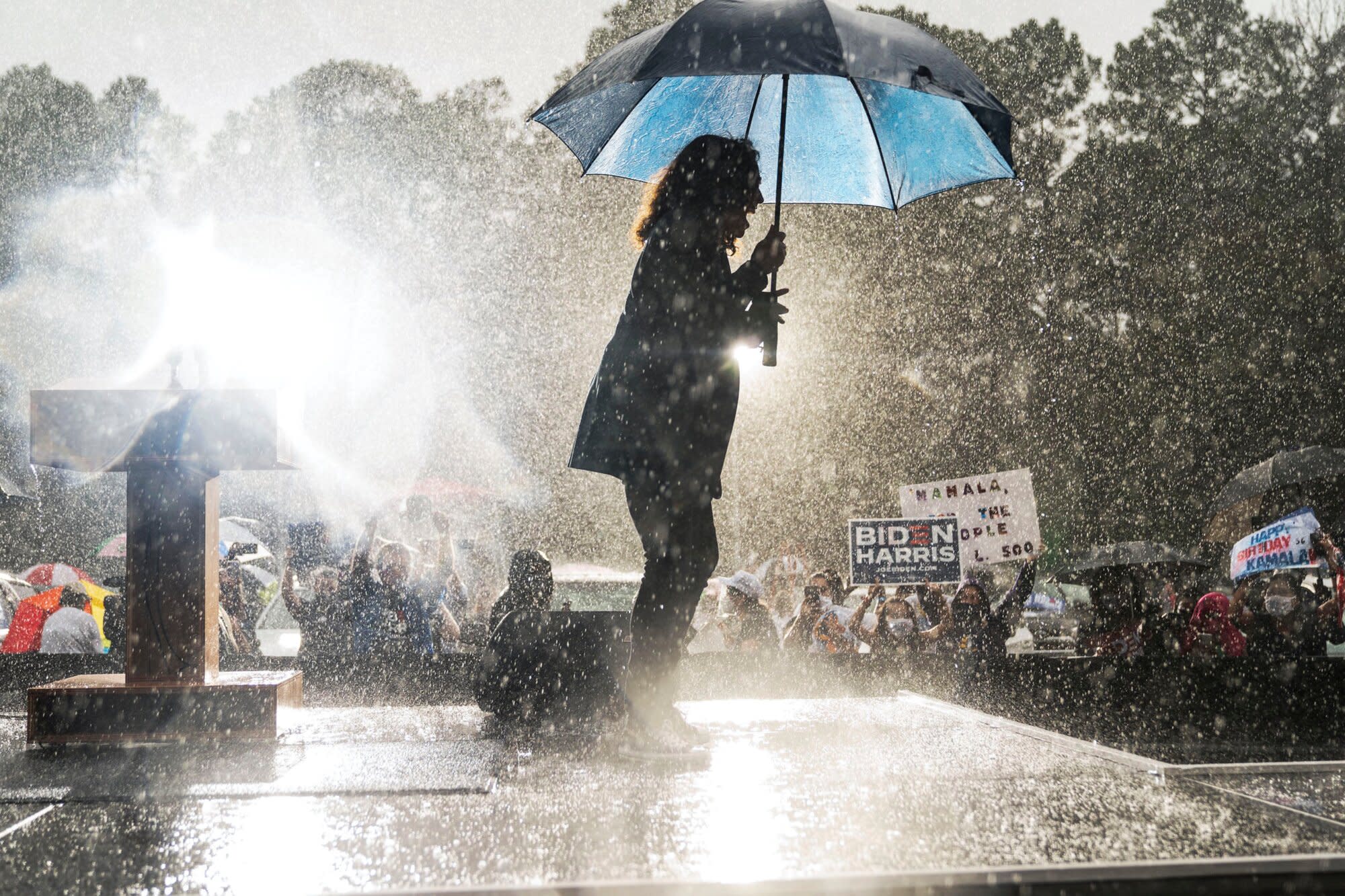 Kamala Harris and Doug Emhoff Could Make History: The Couple Opens Up About a Pandemic Campaign and More

Kamala Harris and Doug Emhoff open up about the difficulties of campaigning during the pandemic, how the couple stays connected despite the travel and stress of politics, and what they plan to do once the election is over.

For Kamala Harris, the 2020 election that could land her three entries in America’s record books — as first woman, first Black and first Indian-American vice president — has already made history as the first pandemic-era presidential campaign and one where stepping off stage to shake hands and take selfies with voters is off-limits.

So when the Florida skies poured rain on her Oct. 19 campaign speech in Jacksonville, there was only one thing she could do: dance.

Sitting down with Harris, in the couple’s first joint interview since Democratic presidential nominee Joe Biden added Harris to his ticket in August, Emhoff recalls how, even before video of his wife dancing in the rain went viral on Twitter, she sent him a photo. “And she’s like, ‘I’m drenched!’ “

“It’s important to be able to laugh at yourself and each other and we do a healthy amount of that,” Harris says over Zoom for the new issue of PEOPLE.

• Watch the full episode of People Features: Kamala Harris and Doug Emhoff streaming now on PeopleTV.com, or download the PeopleTV app on your favorite device.

The couple, who met on a blind date in 2013 and married the next year, have mostly keep separate campaign schedules in order to cover more ground.

“We stay connected all day,” says Emhoff, an attorney and the potential first “second gentleman.”

“Hopefully we get to stay together at night,” he says. “And then we really get to catch up and compare notes of what we’re hearing out there in the real world. That helps drive the campaign as we’re really responding to what’s going on out there.”

But with the campaign holding only mask-mandatory, socially distanced campaign events, Biden and Harris and their spouses have gotten creative — drive-in rallies in big parking lots with horn-blowing instead of applause, for example — and spent a lot of time online at “virtual” events. (Harris and Emhoff, both 56, use a tricked-out studio at Howard University, Harris’ alma mater, for various remote appearances.)

As for those foregone up-close interactions, “There’s nothing like people coming up to you and hugging you,” says Harris, “… so we’re finding different ways to feel and see other.

“We’re trying to make it work via Zoom or social distancing and masks. You can’t see a smile, but you can see smiling eyes,” she says. “It’s very different, but people are still coming out and I love them for that.”

On those rare and fleeting occasions when her and her husband’s separate travel schedules overlap for a layover at their condo in Washington, D.C., it’s a race to tend to the pileup of household chores.

“We are a partnership,” says Emhoff. “It’s a lot of planning. Typically, we get up early, we work out and then we sit down and it’s like, ‘Let’s have a meeting and figure out how we’re going to get through these next couple of days.’ That includes getting dinner and figuring out laundry, mail. All that stuff that doesn’t stop, and we still need to do it.”

Zuma/Splash Doug Emhoff at a campaign event in Philadelphia on Oct. 17

Adam Schultz/Biden for President From left: Kamala Harris and Doug Emhoff in Wilmington, Delaware, in August

• For more on Kamala Harris and Doug Emhoff’s time on the pandemic campaign trail, their partnership and the history they could make, subscribe now to PEOPLE or pick up this week’s issue, on newsstands Friday.

Harris says it helps that her “Dougie,” as she calls Emhoff, is patient and laughs easily.

The campaign is “obviously very stressful. We’re talking about the free world,” she says. “These are serious times and the challenges are incredibly serious, but we don’t take ourselves too seriously in the context of our relationship. You just have to flow and know what’s really important.”

As for the first thing they want to do after the results of the Nov. 3 election are clear?

“And,” says Emhoff, “just get ready for what comes next.”