It is mid-morning in Austin, Texas, and Bill Callahan is mystified by the absence of Hurricane Laura. The previous evening, a category 4 storm was set to sweep through the American southwest, unleashing 150mph winds and wreaking havoc. But somehow his city was spared. “Not even a drop of rain!” he says, and down the line his voice lifts, as if looking upwards. “I guess it’s a clear blue sky right now.” There is a long, steady pause. “The one thing I’ve concluded by living for 50 years is that the weather forecast is almost always wrong. So I don’t check it.”

Callahan is one of a handful of songwriters that seem to live outside weather and time and trend. Across three decades and 20 albums, recording first as Smog, then under his own name, he has become our pre-eminent chronicler of masculinity, nature, desire. His majesty lies somewhere between the oracular precision of his lyrics and the well-deep resonance of his voice; and so to hear him sing of rivers or eagles or horses, or even to talk of hurricanes, is to feel one has been granted some great profundity.

This week Callahan releases his 21st album, Gold Record; a collection of the old and the new, fresh compositions lying alongside orphans from recording sessions over the years. Since late June he has been releasing one track each week, as a single, on the basis that “they seemed kind of the most accessible things I’ve done – they’re not pop songs, but I feel they are accessible lyrically”.

If there was an impenetrability to Callahan in the early years, these days he is increasingly accessible. He talks readily at shows, and the humour that always glimmered beneath the surface of his songs now seems more pronounced. In late 2018 he even joined Twitter, “The shouting aspect wears me down,” he says. “But I guess I like that there’s no rules and no format – it’s as free as any free verse that you want it to be.” Would he ever join TikTok? There is a warm silence across the line. “I feel like photography and filming things isn’t my forte.”

Certainly, life is more settled. In the 2000s, Callahan had much-talked-about relationships with Chan Marshall, aka Cat Power, and later, Joanna Newsom, whose Have One on Me is famously a break-up album. Callahan married in 2014, to filmmaker Hanly Banks, whom he met when she made a documentary – Apocalypse: A Bill Callahan Tour Film – about him in 2012. In the year after they wed, the couple had a son, Bass, and with these developments Callahan’s previous existence, which to the onlooker had seemed determinedly solitary and road-bound, began to soften.

“I think that desire to wander has definitely waned a little bit as my life has changed, as my bed has gotten comfier and as I’ve gotten a nicer quilt and pillows – trying to match a hotel, you know.” He sounds rum. “And then also having a kid, first of all that just ties me to home and also it’s a constant adventure that is almost like hanging out with a new person every day. It’s almost like travelling across the country and you just never know what’s going to happen. So that wanderlust… I think a lot of the reason I had that in the past was because there was nobody at home.”

There is perhaps no greater illustration of his contented domesticity than Gold Record’s unexpected revisitation of “Let’s Move to the Country”, a track that first appeared on his 1999 album, Knock Knock. A eulogy for a simpler, more rooted way of life, its new incarnation has a more leisurely, lived-in feel. A few years ago, he explains, he began playing it live again, “and then going through my head while I was playing it was just how different my life is now than when I wrote that 25 years ago.”

He returns often in our conversation to the revelations of fatherhood. “Watching a person grow is amazing and watching them develop is a good thing to do,” he says. Each day seems to reveal “more and more layers of psychology, more and more layers of complexity” in his son, Bass. Lately he has been considering the struggle of the morning routine, of getting a five-year-old dressed and ready. “I’ve been starting to think: we do this every day, and why? Why do you make it so hard to put on your socks?! It takes 15 minutes to put on one sock! What is this? What is going on here?” He laughs. “I’ve become even more open to letting my son do and be, to follow whatever’s controlling him. And I’ve kind of adapted, so it’s not, ‘We have five minutes to get dressed for school!’ I’ve started giving 40 minutes to get dressed for school. You start early and give them the space, because everything is play to a kid.”

He sees a lesson in this for himself too. “I’ve been trying to expand that into my own behaviour,” he says. “They call it ‘playing music’ for a reason. It’s supposed to be play, it’s not really supposed to be work. And I’m just trying to apply that to everything – like preparing a meal, you’re just like getting to play with fire!”

Fatherhood it seems has led him gently outside of himself. In the song “The Mackenzies”, a story of a man whose car breaks down outside his own house and the neighbour who comes to his aid, Callahan sings of being “the type of guy who sees a neighbour outside and stays inside and hides”. This is an accurate portrait of himself some years ago, he says. “But definitely having a kid broke that. It changed my whole perspective on what a neighbour is and what a community is, and now it’s the opposite – if I see a neighbour outside then I go out there to talk to them.”

I wonder if he feels this sense of community and connection has found its way into his music – the determined isolation that characterised many of his earlier albums seems to have shifted over the last few years, and Gold Record, with its warmth and brass, feels sonically more filled-out. Callahan thinks about this so long that I begin to wonder if it might be the stupidest thing I have ever said. I hear the flicker of what sounds like a cigarette lighter, and when he finally speaks it feels less of an answer and more of a sermon: “More and more I am seeing the world as just one big blob of goo that we’re all in and all of our goo is linked with other people’s and plants and everything, the earth, the dirt,” he says.

“Why we struggle so much is because we don’t want to admit that we’re all linked, we’re all basically one organism. For a while I read the Richard Dawkins book The Selfish Gene and thought, ‘Yes, this makes sense to me.’ And then after a while I stopped seeing it that way. I’d always notice when you’re watching those animal documentaries where a lion is stalking a herd of antelope or whatever, it’s chasing the whole herd, and there’s always one that starts slowing down while the rest of the herd is keeping pace and getting away from the lion. But it’s not like the gazelle has an injured foot or is sick or anything, it just starts slowing down and then the lion catches it. I didn’t really understand what was going on, but it seemed like the gazelle was giving itself to the lion. There’s this guy Charles Eisenstein that I’ve been reading lately, he’s kind of a philosopher and many other things too but he sees the world as a more of a cooperative thing, where species actually cooperate with each other down to the molecular level. It’s not survival of the fittest, it’s cooperation that is allowing life to continue. So that was very influential for the way I’ve been looking at the world lately.”

The world lately has been a strange place. “As far as plagues go, pretty pleasant,” is how Callahan surveys the last few months of pandemic. “I mean the strange thing is when you look at what you can see. I live in a city but I’m not downtown – it’s a very neighbourhood‑y type of area, and it seems like business as usual. There’s not people lying in the streets and pustules and things like that.” There have been times he admits he has grown obsessed with following the news. “And then that makes me feel completely sick and terrified. But then on the other hand I think it’s completely natural that these viruses rise up every 100 years or so and it’s just nature’s way, and it’s happened lots of times in the past, and maybe that’s how the dinosaurs got wiped out…”

He says this part in a tone that sits somewhere between optimism and curiosity. “Well it is possible to ride this moment I think into positive places,” he explains. “A couple months ago I felt very positive about the whole thing happening with the police, protesters and black people, people of colour, it actually seemed like for once in my life I could see maybe this is really going to change something instead of just being on the treadmill that we’ve been on since the Sixties, earlier.”

We are speaking the day after police in Kenosha, Wisconsin, shot Jacob Blake, leaving him paralysed. “I guess it’s going to be a long battle,” Callahan says. “I do have hope for that, even though police are still killing black people, or like just yesterday. It’s a big upheaval that needs to take place just to get a glimpse of what maybe could happen someday.”

In his own household, the pandemic has disturbed very little. Though he would normally by now be on tour promoting the new record, he has been happy to stay home, watching episodes of Masha and the Bear with his son, while his wife, who now works as a therapist, continues her work online.

Having previously observed him as a filmmaker, she has particular insight into his working routine, a fact for which he is surely now grateful in the peculiar days of lockdown. “I saw other people talking about ‘Now my spouse knows what I do all day and they look at me funny!’” he says. “The lifestyle of someone who creates anything, a self-employed creator, is we’re just catatonic for 90 per cent of the day. And up till this point we’d managed to keep it private. But this has exposed us.”

Gold Record is out Friday

Metallica: ‘We’re lucky we don’t have to play by the rules’

Vital ID documents are in lockdown at the DVLA 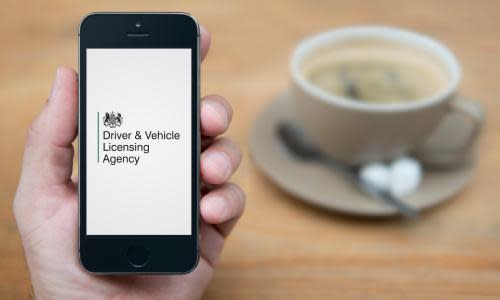