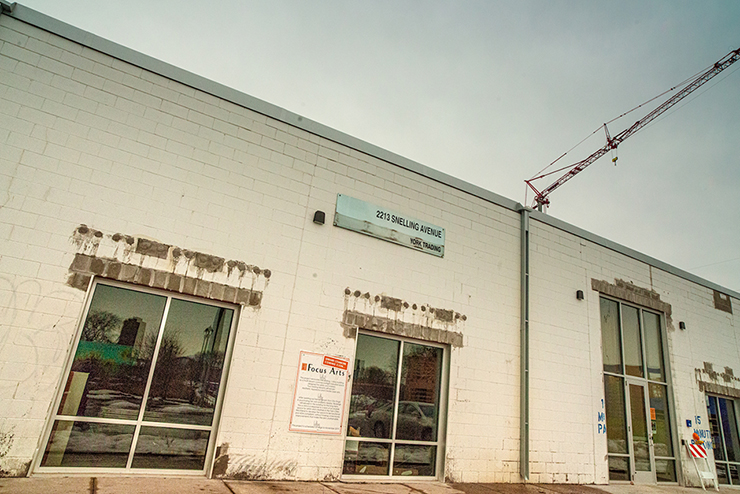 Illusion Theater is moving to the Center for Performing Arts. The Playwrights’ Center will relocate to a former office/warehouse building in St. Paul’s Creative Enterprise Zone. And, announced yesterday, Red Eye Theater will have a new home in Seward.

Yes, we’re still in a pandemic, and no, we don’t know when we’ll be able to gather in any of those places, but we can still enjoy and celebrate the good news about all three.

Red Eye’s next permanent space, after 28 years in its beloved Loring Park storefront (leveled to make way for luxury condos), will be in the Focus Arts building at 2213 Snelling Ave. Focus Arts is run by Seward Redesign, a nonprofit that has dedicated the building to local arts organizations. Threads Dance Project will be a neighbor, and Foci Glass Arts, and Somali TV Minnesota. All My Relations Gallery and the Native American Cultural Corridor are nearby.

Red Eye has signed a long-term lease and will turn about 3,000 square feet into a flexible, fully accessible black box theater. Lead support will come from the McKnight Foundation and several individual donors. Red Eye will also embark on a major capital campaign. During construction, the space will be open to limited, pandemic-safe projects, viewable through JOBSITE, a new online video series directed by Co-Artistic Director Theo Langason that will start this month.

Red Eye is the only theater in the Twin Cities with seven artistic directors: Langason, Jeffrey Wells, Hayley Finn, Emily Gastineau, Andrew Dolan, Valerie Oliveiro and Rachel Jendrzejewski. All seven were announced in early May 2019, and all seven are still on board, meaning the theater’s unusual horizontal leadership model is working.

The new space will be used for Red Eye’s own programming, including original productions by the artistic directors and the long-running New Works 4 Weeks Festival. It will also host co-productions and curated rentals.

Movies you won’t hate yourself for watching

There are two days remaining in the Italian Film Festival, long enough to catch one or two more films in this well-curated selection of U.S. and Minnesota premieres. If there’s a theme to the five we saw, it’s the importance of family and friendships, perhaps the #1 message of the times we live in. Trailers, tickets and FMI at the links.

“The Big Step (Il Grande Passo)” reunites two brothers of different mothers but the same absent father. One runs a hardware store and lives with his mother; the other, consumed with having seen the TV broadcast of the moon landing as a child in 1969, is determined to go to the moon himself. So he builds rockets and sometimes sets a neighbor’s fields on fire. This is a film full of quirky characters and sweetness. Giuseppe Battiston and Stefano Fresi, who played the brothers, both won Best Actor awards at the film’s premiere in Torino.

Kim Rossi Stuart has been called “the Italian equivalent of Paul Newman,” and while we wouldn’t go that far, we were happy to see him again in this film. He was also in the festival’s opening film, “The Best Years (Gli Anni Più Belli).” In “Everything’s Gonna Be Alright (Cosa Sarà),” Stuart is a film director who learns he has leukemia and needs a bone marrow transplant to survive. A secret from his father’s past takes the whole family to a better place. We almost skipped this one – these days, who needs to see a film about someone who might be dying? – but we’re very glad we saw it. It leaves you smiling through tears without striking a single artificial note.

Aldo, Giovanni  & Giacomo are three Italian comedians who have been working together since the 1990s. In “I Hate Summer (Odio l’estate),” they play the dads in three Italian families who end up sharing the same rental house during summer vacation due to a booking error. And Italy has long vacations. This award-winning film isn’t quite National Lampoon’s Apulia Adventure, but it’s satisfyingly silly. It’s also good to see the families gradually, if grudgingly, become real friends.

Most of us have seen photographs of the Europe’s great cities in lockdown, and the weirdness of the empty streets, shuttered shops and tourist destinations absent tourists. “iSola” takes us to Rome, where filmmaker Elisa Fuksas brings us into her own daily life in quarantine. Filmed entirely on her phone, it premiered at the 2020 Venice International Film Festival. It’s not only about isolation and boredom; Fuksas has been diagnosed with thyroid cancer, her surgery delayed by the pandemic, and her best friend of many years, who lives in another city, is also very ill. Watching this documentary is an intimate and immediate experience.

V is for virtual, L is for live and in person.

V Today (Wednesday, March 3), 3 p.m.: University of Minnesota Libraries: John Berryman’s Selected Letters: A Transatlantic Celebration. Winner of the Pulitzer Prize and the National Book Award, Berryman (1914-1972) was one of the leading poets of his generation. For the last 15 years of his life, he taught at the University of Minnesota. This event will serve as the book launch for “The Selected Letters of John Berryman,” edited by Philip Coleman and Calista McRae. The editors and invited guests Eve Cobain, Henri Cole, Ray Gonzalez, Patricia Hampl and Richard J. Kelly will read from the letters and consider Berryman’s legacy in a discussion moderated by poet and critic Peter Campion. Free, with reservation required.

V Thursday and Friday, March 4 and 5, 7:30 p.m.: Schubert Club International Artist Series: David Finckel, Wu Han and Friends. While we can’t attend in person, the Schubert Club continues to offer its flagship International Artist Series free of charge on its website, Youtube and Facebook pages. Filmed in New York, both of these concerts will have their premieres with the Schubert Club. Thursday’s concert will feature Schubert’s Piano Trio No. 2 in E flat, Friday’s the Quintet in C major. Each will include exclusive interviews and commentary by the artists. A pre-concert lecture by David Evan Thomas is available now. Read the program here. Free and open to all; no registration required.

Kazui Ishiguro and Dean Koontz will headline the Loft’s next Wordplay book festival, to be held virtually May 2-8, 2021. Ishiguro (“Remains of the Day”, “Never Let Me Go”) will be in conversation with Yaa Gyasi (“Transcendent Kingdom”). Koontz, a master of suspense and horror, has published more than 100 novels and sold more than 450 million copies of his work. He will talk about his latest project. This will be the festival’s third year and the second time it has been online. FMI and enhanced tickets. General admission tickets will go on sale March 25, when the full lineup and schedule are announced.