Devonta Freeman was driving home to the Pork ‘n Beans housing projects with the front man from 2 Live Crew when he figured out he needed to get a job. Luther Campbell — or, as he’s better known, Uncle Luke — told 11-year-old Freeman he needed to become the man of his house, and help support his mother and four siblings.

So he went to work: Long before Freeman signed with the Giants to replace Saquon Barkley, his first job was as an attendant at a funeral home near Pork ‘n Beans — in the Liberty City neighborhood of Miami — where he grew up.

Sign up for Giants Extra: Get exclusive news, behind-the-scenes observations and the ability to text directly with reporters

He set up for services, handed out roses to family members to place at the gravesite, and stood by caskets to make sure bodies didn’t fall out accidentally. Some nights, he’d watch as people he knew, some of them friends, were embalmed and prepared for their final viewing. It was an early reminder of his own mortality.

“He saw killings,” Dwight Jackson, who runs Richardson Funeral Home, told NJ Advance Media. “His idea of survival was to make sure that he could provide for his mom and sisters, and to try to limit his mistakes. He had that spirit of motivation and of leadership for a 11-year-old kid.”

Campbell — the infamous and pioneering rap star — was a father figure while Freeman’s dad was in and out of jail. Freeman (almost) always listened to his advice. Now at 28, Freeman is seven years into his NFL career, having earned $25 million — and he’s saved most of it. He’s never cashed a game check.

The Giants could use that maturity in their young locker room. They’re 0-3, an organization in disarray. Freeman is here because Barkley, their star running back, tore the ACL in his right knee and is out for the season. The Giants, planning a run-first offense, rank last in the NFL in rushing yards. They’re turning to Freeman, signed to a one-year contract, to fix that.

There are questions about how much Freeman has left in his tank, after the Falcons cut him in March. Will his body even let him return to his Pro Bowl level?

“He’s always had to prove himself,” Campbell told NJ Advance Media. “If they give him the opportunity then, s—t, the Giants got a steal.”

Freeman wanted to work so badly at Jackson’s funeral home that he cried. Jackson wouldn’t let him at first. He thought Freeman, a known jokester, wasn’t serious about it.

On a whim, he changed his mind. Jackson drove to Freeman’s apartment in the Pork ‘n Beans projects — named because residents couldn’t afford much more than canned meals — and told him to show up for work the next Saturday in his nicest clothes.

But Freeman didn’t own any nice clothes. Jackson found a suit donated to the funeral home — it didn’t match the other employees’ suits, but it fit Freeman. Freeman found a tie and snagged a pair of Jackson’s three-sizes-too-large shoes without telling him. They were expensive — worth $500.

“He still owes me for those,” Jackson said, laughing. “I raised hell with him for a minute (about the shoes), but then I said, ‘You know what, man, he’s working.’ It didn’t matter because he was trying to make better for himself.”

Freeman worked each Saturday and made $150 to $250, depending on the number of funerals.

Other days, when Freeman wasn’t playing football or going to school, he’d wash Campbell’s three cars. He liked washing the Range Rover, Campbell said, because he’d often find money under the seats. Campbell paid him $50 per car, and more if he helped clean the windows on his large house.

“Growing up, you know who Uncle Luke is,” said EJ Manuel, Freeman’s quarterback at Florida State, “if you have any type of understanding of rap culture.”

Campbell’s music was ill-fitting for an 11-year-old, but his life lessons proved long-lasting.

Campbell saw Freeman playing baseball at Moore Park in Miami when he asked him to join his youth football program. Campbell has been an influential figure in Miami football for years, at the high school level and for the University of Miami. He helped groom prominent NFL players like Chad Johnson, Duke Johnson and Lavonte David.

“All the kids, I would tell them: You always work for everything,” Campbell said. “I don’t ever want you to go and ask these street guys for no money. If you need money, you come and ask me. Then I’m going to put you to work. Devonta wouldn’t say, ‘I need the money.’ He’d say, ‘I need work.'”

Freeman is one of Jackson’s greatest success stories — from a 5-foot-8 high school running back, passed over by Miami, to Florida State star, to fourth-round NFL draft pick, to two-time Pro Bowler who once signed a $41 million contract.

“You can definitely tell Devonta got it out the mud, so to speak,” Manuel said. “Nothing was handed to him on a silver platter. He earned it.”

“He kept his nose clean and did what he had to do,” said Lockette, now an assistant at Miami. “And it’s all paying off for him.”

Freeman always has listened to Uncle Luke — until March, when he was cut by the Falcons in a cost-saving measure after struggling in 2019. Those close to Freeman, including Campbell and Jackson, say the Falcons — especially offensive coordinator Dirk Koetter — used him improperly, which is why his numbers lagged.

Still, Freeman viewed himself as an elite running back, and he wanted to be paid like one. In May, he rejected a one-year, $4 million contract offer from the Seahawks, despite Campbell and his wife, Kristin — who happened to be Freeman’s agent — pleading with him to take the deal.

“I always tell him to make his own decisions,” Campbell said. “But I said to him, ‘Look, boss, you might need to take this deal. It’s a good situation. There’s no other deals out there better than this.’ He said, ‘Nah, I’m going to just sit here. I want more.’ That was the first time he didn’t listen to me.”

Days later, running back Carlos Hyde signed with the Seahawks — and took Freeman’s money. Freeman was “really upset,” Jackson said. The Eagles and Jets showed interest, but neither offered the money (or role) Freeman sought. Campbell’s wife cut ties with Freeman, who replaced her with Drew Rosenhaus.

When the offer he wanted never came, Freeman found himself hanging around Miami and Atlanta, staying in shape, waiting for the phone to ring again.

“I just think a lot of situations didn’t fit me and fit what I want to do and some of my personal goals,” Freeman said last week. “I know I still have a lot in the tank.”

Recently, Freeman sat down with Campbell. (Their relationship is fine, Campbell says.)

Campbell knows he will.

“He understands: If you make a decision, you have to live with it,” Campbell said.

Here’s the thing: Freeman doesn’t even need the money. Freeman — who is unmarried and has no kids — only spends money from endorsements and other earnings, Campbell said. That was one of Uncle Luke’s biggest life lessons to him — save your money.

He’d ask Freeman: How much money did your mother make taking care of five kids?

“OK, so how much do you need to take care of yourself?” Campbell said. “You can’t go and have all these kids. So, just think about how this can be all of your money up front. I talk to the kids like that so they understand not to blow their money on strip clubs, parties and their homeboys. He doesn’t have none of them problems. … When he’s home, he goes to work.”

For now, home is East Rutherford.

Freeman was sitting in his Philadelphia hotel room, after a tryout with the Eagles, watching them get blasted by the Rams in Week 2 when he saw the news: Barkley had injured his knee. The Giants gave Freeman an audition — a 3 1/2-hour workout to test his conditioning.

They liked what they saw. Freeman quickly signed a one-year deal that can be worth up to $3 million. He played briefly in the blowout loss to the 49ers in Week 3 — 15 snaps, five carries, 10 yards. His role is expected to increase, starting this week against the Rams.

It’s been only a week since he signed, but the Giants think Freeman is exactly the kind of player — and person — they need right now.

“Guys that come from where he grew up, they’re tough dudes,” Giants coach Joe Judge said.

Freeman’s wait cost him an offseason, training camp and the first two weeks of the season. And yes, he hears the talk about being washed up. As if he need more motivation.

“With this time off, it kind of refueled him,” Campbell said. “He was already fueled, but this really was like: When you’re away from something that you love, you appreciate it a lot more.

“He’s always had to prove himself. It was hard for him to accept that he wasn’t considered one of the elite running backs in the league. So, when he gets like that, he has a fire burning in him that makes him unstoppable.”

Jackson agrees. He’s known that since he first offered Freeman the gig at his funeral home. He remembers driving from Freeman’s apartment after initially turning him down for the job. He went three blocks, slammed on his brakes, and pulled a U-turn. That’s when it hit him.

“I thought to myself: You need to go and get that kid,” Jackson said. “He’s going to be something special.”

Zack Rosenblatt may be reached at [email protected]. Tell us your coronavirus story or send a tip here.

Thu Oct 1 , 2020
BEIJING (Reuters) – China estimated that 13 million railway passenger trips were made on Thursday at the start of the Golden Week holiday, the highest for a single day since the coronavirus outbreak began in February, according to state media. Although this figure signals pent-up demand for travel now that […] 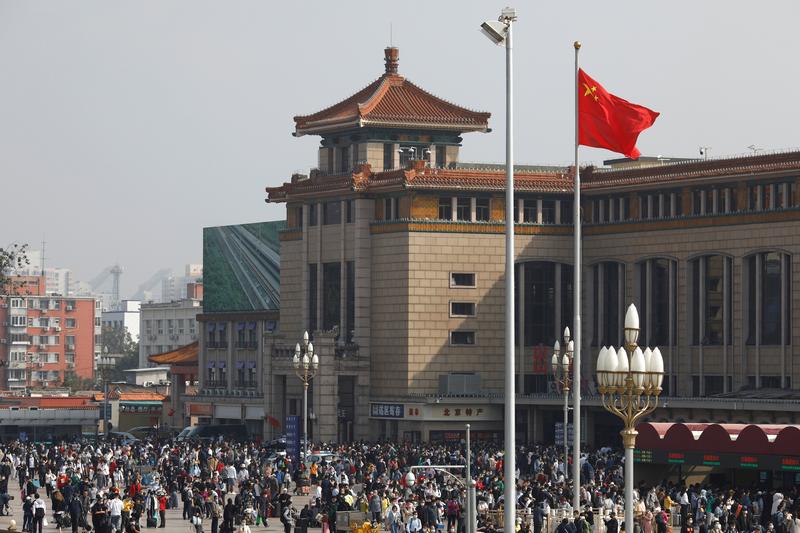