The digital escapism of video games has become ever more important in 2020, as people search for entertainment, distraction and challenge in their vastly altered reality.

Even as we look forward to new games consoles in the form of Xbox Series X and PS5, developers have not let us down in providing us with thrills, spills and relaxation. The best games of 2020 span military action, post-apocalyptic drama, chilled out town management and even giant jelly beans grappling in a flamboyant game-show.

Here are our favourites of the year so far. If there are any we may have missed, let us know in the comments below and we will be sure to lose ourselves in another new world.

This surprise breakout hit from London developer Mediatonic earns its success with its riotous ‘It’s a Knockout’ multiplayer melee. 60 players online take control of delightfully bulbous contestants as they compete in obstacle courses, gunge runs and platform challenges. Only a select number qualify from each round, until the last remaining contestants fight for the crown. Each event is terrifically tuned to the simple controls and it is hard to wipe the grin from your face, win or lose. Most video games are a thrill in victory, but few games make failure such fun.

No, 2D action-platformers with a ‘Metroidvania’ are hardly conspicuous by their absence these days, but Carrion comes with a diabolical twist. This time you are the monster, a bio-organic mass that has escaped from its lab-jar confines. Your writhing tentacles sweep through the facility, terrorising your captors and turning them to mulch. There is a gruesome delight to the animation, while its subversion of the genre makes for a dastardly new outlook.

A surrealist puzzle-adventure from the developer of Machinarium, Creaks casts you as a gangly layman sucked into a bewildering underground of higgledy towers and creepy creatures. Many of the tasks you face in navigating this world has you figuring out how to tease deadly enemies into cunning positions. Force a rasping, angular dog under a lightbulb and they transform into common furniture to clamber on, for instance, while creepier and more manoeuvrable monsters reveal themselves in time. A testing puzzler brought together by its curious, chatter-free and Kafka-esque milieu.

Nintendo’s most unusual imagining of its famous mascot returns as a curious hybrid of puzzling, action-role-playing and Zelda-esque dungeoneering. Its craft-box world is an utter delight, with a procession of colourful characters and gorgeous folded landscapes to explore. Combat asks you to line-up your foes in a brain-teaser before bopping them with your boots or thwacking them with a hammer. It’s an idea that grows and becomes more layered as you face more difficult foes. The result is a handsome, clever and genuinely funny game that is likely to confound expectations.

Team Superhot return with its ludicrously effective FPS idea: time only moves when you do. This time the concept has been expanded to a rogue-like affair, players moving through different bite-sized challenges of lobbing guns at digital figures and smacking them with ashtrays. Each segment gets trickier, while buffs can be unlocked to give you an edge. It might not have the shock of the new that the original had but, smartly, it never gets away from that brilliant John Wick-esque core. Just this time: there’s more of it. Hard to argue with that proposition.

A triumphant sequel to Revolution’s classic sci-fi point-and-click adventure. While Beyond A Steel Sky has the modern mod-cons of a third-person adventure, that gloriously arcane puzzling has never been sharper as your ‘Gaplander’ Robert Foster faces tricky tests of tenuous logic in his search for missing children. Witty and charming, the colour-drenched dystopia of Union City is well worth the return trip.

A scalding treatise on the cycle of violence in a ruined world, Naughty Dog’s extraordinary sequel provides one of the most impactful blockbuster video games in years. Our ‘heroine’ Ellie’s trek through a stunningly detailed post-apocalyptic Seattle is full of vicious twists, horror beats and harrowing moments. Yet somehow all of this (and its heart-stopping survival combat) is interspersed with tender humanity delivered by performers at the top of their game.

League of Legends developer Riot Games spreads its wings with this rambunctious tactical shooter. A heady mix of Counter-Strike and Overwatch, Valorant had already built up a lively community in its beta period which has continued to go from strength to strength since its official June release. With Riot’s beguiling aesthetic and a brilliantly fun spin on the genre, Valorant is set to become a regular fixture in the esports calendar.

Minecraft Dungeons common epithet of ‘Diablo for kids’ may sound like a jibe, but it is a description that comes with a lot of merit. Building a co-operative action role-playing game for all the family is not an easy task at it seems, meshing hack and slash fantasy brawling and the constant improvement that comes from loads of lovely loot with an accessible kid-friendly veneer. In this, Minecraft Dungeons is a clear success.

Signs of the Sojourner (PC, Switch)

Digital card game with a difference. Instead of pitting your cards against a cross-table opponent, you use your acquired deck to thread together conversations as you travel across a fantasy world. You are a trader following familial routes and encountering a wide range of eccentric characters. Clever, compassionate and uncommon.

A pitch-perfect attempt at thumping this classic beat ‘em up into 2020 shape. Streets of Rage 4 honours its legacy with scintillating side-scrolling action, but layers on modern brawling mechanics and a gorgeous comic-book aesthetic. Giving thugs a good shoeing has never looked or felt so good.

Following on from Gears 5 success at the end of last year, Microsoft’s blockbuster is finding a bit of a renaissance. Perhaps we weren’t expecting it in the form of a strategy game made by Bromley’s finest -Splash Damage- yet here we are. In truth the cover blasting makes a rather convincing foil for Xcom style tactical maneuvering, while the developers marry that convincing gameplay with Gears’ recognisable brand of muscular sci-fi

Stepping back onto City 17’s brutalist streets for the first time since 2007 would have been a Proustian rush in any circumstance; doing so via the medium of VR is almost overwhelming. Valve have crafted an inherently tactile world that you interact with via the ‘Russels’ -Half-life 2’s game changing gravity gun in glove form. It’s not just that Alyx is a full-fat Half-life game, then – although it certainly helps, with its brilliant world-building and terrifying horror beats – but one that embraces its new medium. Half-life 3 this ain’t, but Alyx is an awe-inspiring amalgamation of atmospherics and immersion which does for VR gaming what its forebears did for the first person shooter genre all those years ago.

Doom Eternal, like the series successful 2016 reboot, is an orgiastic cacophony of violence. A relentless parade of mulching demons with enormous guns soundtracked by Mick Gordon’s thunderous, escalating heavy metal. As the Doom Slayer, your giant fists swing across the screen like cannonballs, yanking the legs off skittering brain-spiders and jamming it back through their eyeball, feeding a mancubus its own heart or dissecting fodder with a roaring chainsaw. It is relentlessly noisy, gleefully gory and, yes, splendid fun.

Nintendo package off its charming village sim to a desert island, tasking you with crafting your own idyllic town and casting yourself into a lifetime of debt with a talking tanooki. Animal Crossing’s gorgeous escape found a particular resonance during lockdown, the ideal relaxation spot to lose yourself in, tend to your town, meet friends online and even obsess over turnip prices. Perfectly timed and perfectly pitched, Animal Crossing has become an unlikely beacon of hope for a digital generation.

Many games have tried to capture From Software’s ‘Soulsborne’ sense of challenge, technique and world-building. Few have even come close to succeeding, but Team Ninja’s Nioh is one of the best. This 16th century samurai sequel greatly expands on the first game, as you hunt down ‘yokai’  in feudal Japan. The swordplay is magnificent, while the challenge is merciless.

Ori and the Will of the Wisps (Xbox One, PC)

The follow-up to magical platformer Ori and the Blind Forest is another game of movement and grace. Ori scampers with definable purpose, leaping over poisoned waters and between thorned outcrops. It is that rare breed of game in which your avatar is completely attuned to your fingertips and experience has allowed Moon Studios to greatly expand on its ideas from the first game.

Call of Duty’s second crack at battle royale is one of the more inventive entrants into the explosive genre made phenomenon by Fortnite. As you are dropped onto a huge map with scores of other opponents in a fight to the death, Call of Duty: Warzone makes things interesting with contracts to fulfill in the field, loadouts to acquire and a second chance in the one-on-one ‘Gulag’. These tweaks to the formula, teamed with battle royale’s natural tension and CoD’s snappy gunplay, have found further success for Activision’s behemoth.

Lair of the Clockwork God (PC)

Brilliantly funny platform adventure from Brit developer Size Five Games, Lair of the Clockwork God follows the witheringly sarcastic alter-egos of creator Dan Marshall and co-writer Ben Ward through an apocalyptic London. In a terrific twist, you switch control between the two, Dan posing himself as an athletic platform hero and Ben relying on more traditional point-and-click adventuring. Pairing the two styles is a real treat, allowing for some inventive set-pieces, while its side-splitting snark has a humour hit-rate that is all too rare in video games.

Media Molecule’s extraordinary creative toolbox gives its players unprecedented scope to build their own games or digital artwork.If you are not so artistically-inclined, Dreams has its own series of abstract puzzles as a campaign of sorts. But its real pleasure comes in scouring its bewildering array of player-created masterpieces -from cheeky recreations of existing games, to inventive new ideas or even mouth-wateringly realistic renderings of a full English breakfast.

Subtle? Goodness me, no. Brain-dead? Not a bit of it. Zombie Army 4 is a game about giving the Nazi undead a damn good thrashing and little else, but developer Rebellion has tuned its action smartly enough that it is consistently great fun and gruesomely moreish. Comparisons to Left 4 Dead -Valve’s co-op zombie thriller par excellence- are a little grand, but Rebellion’s blaster scratches a similar itch you may have in its absence.

Thu Aug 6 , 2020
On the road: public text artist Sam Edward: Simon Calder As evening settles over a patch of ancient woodland a mile south of Durham city centre, the tranquillity is shattered by a clatter of steel letters being attached to a metal frame. This purpose-built frame is part of an artwork […] 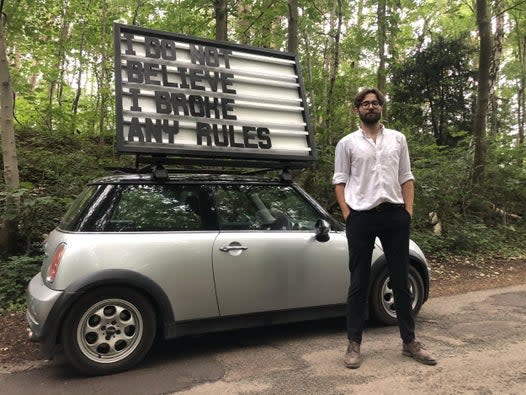