Veteran cornerback Maurice Canady and undrafted rookie receiver Stephen Guidry have opted out of playing for the Dallas Cowboys this season because of the coronavirus pandemic.

Canady signed a one-year contract with the Cowboys after splitting the 2019 season between the New York Jets and Baltimore. The Ravens drafted Canady in the sixth round in 2016.

Guidry had 827 yards receiving and eight touchdowns in two seasons at Mississippi State after playing two years of junior college. He faced long adds to make the roster at a position that includes Amari Cooper, who signed a $100 million contract in the offseason, third-year man Michael Gallup and first-round pick CeeDee Lamb.

Taylor, a second-round pick from Florida last year, started all 16 games as a rookie.

The COVID-19 list is for a player who tests positive for coronavirus or has been quarantined after being in close contact with someone infected. NFL teams are not allowed to disclose whether the player is in quarantine or is positive for COVID-19.

The NCAA is allowing all major college football teams to begin their seasons as early as Aug. 29.

The association confirmed that the football oversight committee had requested a blanket waiver to permit any school to push up the start of its season to the so-called Week Zero.

The official start of the season had been Labor Day weekend, with a few games scheduled for Aug. 29. That was before the coronavirus pandemic put the season in peril and schedules were remade to deal with potential disruptions of COVID-19.

Some schools and conferences are working on delaying the start of their football seasons while others are trying to get a head start. Kansas and Oklahoma from the Big 12 have both recently moved up their opening games against FCS opponents to Aug. 29.

The Summit League is pushing back the start of fall sports to Sept. 23 due to concerns about the coronavirus pandemic.

The conference’s president’s council agreed to delay championship seasons for men’s and women’s soccer, volleyball and cross country. Non-championship segments for golf and tennis, along with non-traditional seasons for softball and baseball also were pushed back.

Soccer and volleyball will have conference-only schedules.

A women’s professional tennis tournament that was supposed to be played in Tokyo in November has been canceled because of the coronavirus pandemic, the latest event scratched from the sport’s calendar.

The Toray Pan Pacific Open already had been postponed from September because of the COVID-19 outbreak that has put the WTA and ATP tours on hold since March.

Tuesday’s announcement follows news last week that 11 men’s and women’s tournaments planned for later this year in China were scrapped.

That included the WTA Finals.

As of now, women’s tennis is scheduled to resume next week in Palermo, Italy.

The Minnesota Intercollegiate Athletic Conference has moved most fall sports until the spring, including football.

The MIAC joined the majority of its NCAA Division III peers, postponing competition in cross country, football, soccer and volleyball. Tennis teams will be permitted to compete against conference opponents this fall in accordance with campus, state, NCAA and MIAC health directives. That sport is deemed low risk for coronavirus transmission.

Training, practice and other team activities will be permitted in the postponed sports, in compliance with the virus-related guidelines.

The biggest impact of the MIAC’s move will be on the football game between league powers St. John’s and St. Thomas, rivals who first played in 1901 and have faced off 89 times in the sport. This year’s game, which was scheduled for early November at U.S. Bank Stadium, the NFL home of the Vikings, could be the last ever with the impending move by St. Thomas to the FCS level after being booted from the MIAC for competitive reasons.

The Tennessee Titans have placed their top draft pick on the COVID-19/reserve list.

Coach Mike Vrabel announced that move Tuesday at the end of a 40-minute video conference call with reporters.

The Titans drafted offensive lineman Isaiah Wilson with the No. 29 pick overall out of Georgia, and Wilson remains the one member of their six-man draft class that has yet to agree to a contract. Wilson is expected to compete for the right tackle job that came open when Jack Conklin signed with Cleveland in free agency.

The Titans so far have had one player opt out. Undrafted rookie free agent Anthony McKinney is an offensive lineman out of Texas Christian. Vrabel confirmed McKinney informed the coach and general manager Jon Robinson of his decision.

Vrabel says he has not heard nor talked to other Titans who might choose to opt out and is waiting until players make the best decision in the interest of themselves and their families.

A person familiar with the situation says New England Patriots linebacker Dont’a Hightower has decided to opt out of the 2020 season.

Hightower’s decision was made out of concern for the health of his fiancee and child, who was born earlier this month, the person said. The person spoke to The Associated Press on condition of anonymity because the Patriots have not announced the decision.

ESPN was the first to report the move.

Cannon is a cancer survivor and Vitale has a young family and doesn’t want to risk exposing them, according to the sources.

Two people with direct knowledge of the decision have confirmed to The Associated Press that Buffalo Bills starting defensive tackle Star Lotulelei is voluntarily opting out from playing this season.

The people spoke to The AP on the condition of anonymity because the team has not revealed this information as players reported for the start of training camp Tuesday. The NFL Network first reported Lotulelei’s decision earlier in the day.

The 30-year-old Lotulelei has seven years of NFL experience and was entering his third season with the Bills. He has two years remaining on his contract, which will now run through 2022.

Iowa has paused its men’s basketball workouts for 14 days after two players tested positive for COVID-19, the school announced Tuesday.

Iowa’s protocol requires individuals who test positive to be in isolation and for people who might have been exposed to someone with the virus to be quarantined.

Ohio State will limit home crowds to about 20,000 and prohibit tailgating if the football season is played this fall.

Fans inside Ohio Stadium will be required to wear masks and observe social distancing to help stem the spread of the coronavirus pandemic. Concessions will be limited.

The traditional ”Skull Session” pregame pep rallies at St. John’s Arena will not be held.

The New Jersey Athletic Conference announced the suspension of all fall sports because of the coronavirus pandemic.

A fan favorite for his humorous style leading sports programs, Rodrigues was hospitalized on Saturday in Rio de Janeiro after feeling nausea and disorientation. Doctors found he had a cerebral venous blood clot, one of the possible bodily responses to an infection by the new coronavirus.

Rodrigues had surgery on Sunday and was in an induced coma.

He worked at TV Globo and its cable channel Sportv, which confirmed his death during one of the programs he hosted.

Rodrigues also worked in several other Brazilian networks, including ESPN.

Due to the coronavirus pandemic, the 38 women and two men earned their spots in online tryouts. The results were announced on Monday night on a livestream on the Falcons website.

Chato Hendrix, director of the cheerleaders, said the group was disheartened at first to have to go completely virtual, but like the rest of the world had to adapt.

Hendrix says the virtual tryouts made it possible for out-of-state applicants to compete for spots without having to travel to Atlanta.

This is the first time since 1989 the Falcons have had male cheerleaders.

Ball State has filled one of three open dates on its football schedule by announcing plans to open the season Sept. 12 at Iowa State of the Big 12.

The game replaces a previously scheduled date for the Cardinals at Michigan and the annual rivalry game at Iowa for the Cyclones. Both games were wiped out when Big Ten officials said they would play a conference-only schedule.

Ball State also had its Sept. 3 season opener against Maine and a Sept. 19 trip to Indiana canceled earlier this month. The Big Ten games reportedly cost the Cardinals about $1.7 million in guaranteed money.

Ball State is still scheduled to host Wyoming on Sept. 26 in its second game of the season before heading into Mid-American Conference play.

The announcement came as the team returned to practice ahead of its Champions League match against Manchester City on Aug. 7. Real Madrid lost at home 2-1 in the first leg of the round-of-16 series.

Madrid says Mariano was in ”perfect health condition” and was following health protocols.

The entire Madrid squad was tested for COVID-19 on Monday. The players had been on a break of almost 10 days after winning the Spanish league title.

The French government has maintained a maximum capacity of 5,000 fans in stadiums until the end of August amid the coronavirus pandemic.

French sports minister Roxana Maracineanu says the decision was taken because France has seen an increase in coronavirus cases recently.

But Maracineanu adds that local officials will have the authority to increase the capacity at some events from Aug. 15 if they can obtain special dispensation and observe strict health and safety protocol.

Only 2,805 fans attended the French Cup final between Paris Saint-Germain and Saint-Etienne last Friday but the number was low because Saint-Etienne fans did not use their allocation of 900 seats at Stade de France.

PSG faces Lyon in the League Cup final at the same stadium on Friday.

Tue Jul 28 , 2020
LOS ANGELES (AP) — Passengers flying Virgin Galactic on suborbital trips into space will be able to see themselves floating weightless against the backdrop of the Earth below while 16 cameras document the adventures, the company said Tuesday. Highly detailed amenities to enhance the customer flight experience were shown in […] 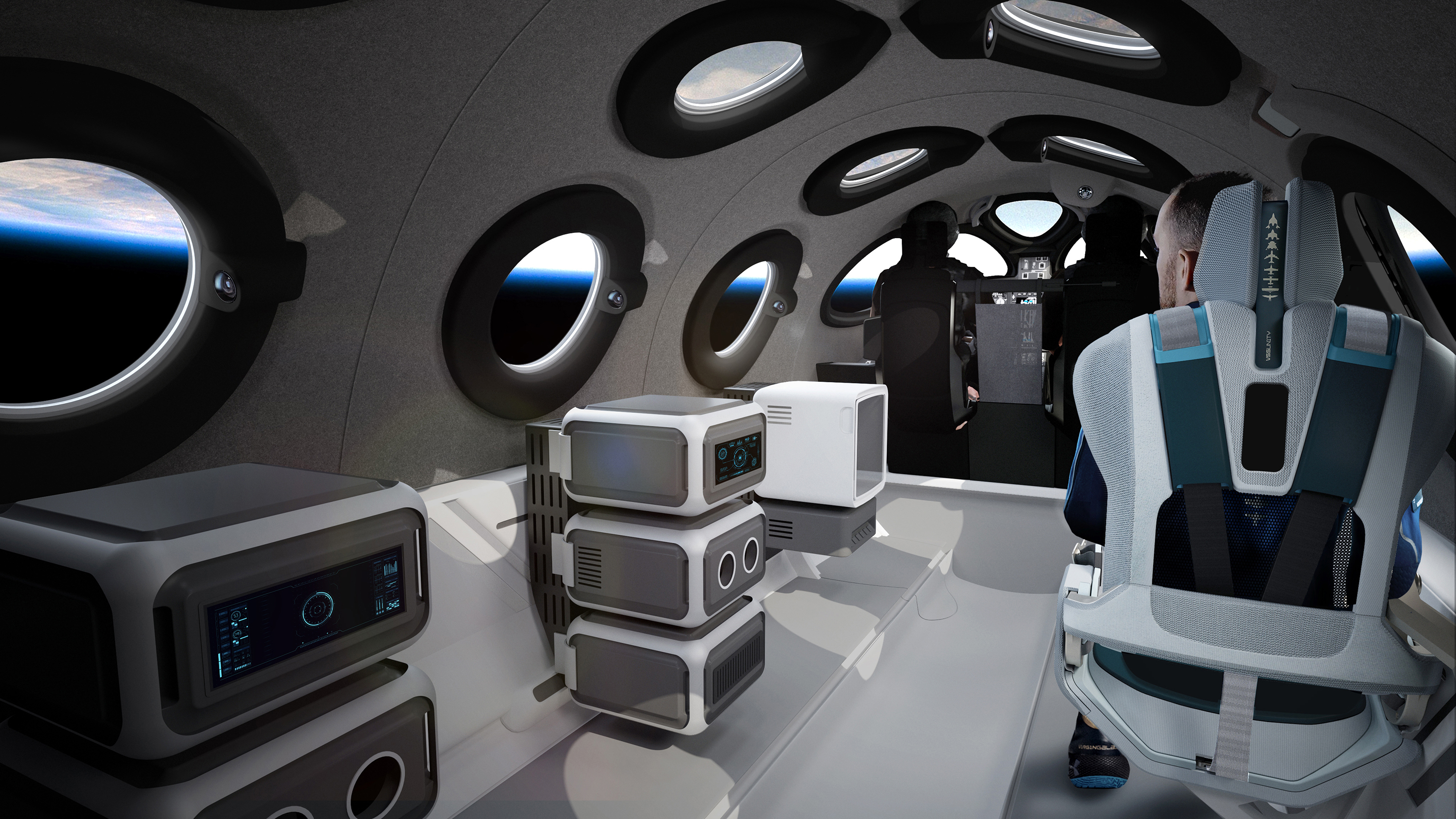