Sunday night was MTV’s Video Music Awards, usually a must-watch for those who think red carpets should have more of an Alice in Wonderland (in Chains!) tea party vibe. But this year was destined to be different, because it was also the first red carpet of the quarantine era, held outside and without an audience. Celebrity fits have been scarce lately, so the vision of Machine Gun Kelly in an electric pink Berluti suit and Nicole Richie swagged in highlighter green taffeta was in some sense a balm, as were Maluma in a plugged-in-green Balmain kit with Kool-Aid-colored hair, and Keke Palmer in a lemon-yellow batwing playsuit. Lady Gaga filled out the rest of the technicolor color wheel in Iris van Herpen. To her credit, her album is called Chromatica.) After a dearth of major celebrity fashion moments and summer tours with turbo wardrobes, famous musicians are finally wearing their favorite neutral—look-at-me neon—once again. Nature is healing!

It was a relief, but it was also something of a disappointment. Undoubtedly, it’s a struggle to style a celebrity in a pandemic—the endless fittings, special collaborations, and constant travel that make big splashy looks happen become even more impossible—so it was unsurprising that musicians and their consigliere stylists fell back on an old standby. Neon has been a red carpet standard for almost a decade now, since Raf Simons’s Spring 2011 Jil Sander collection made screaming green and WOW-pink into soothing, ceremonial tones.

Back then, fast fashion brands breathed rave culture fumes into Coachella-ready fits for premium selfie culture, and that became the norm for several years of VMA and Grammy red carpets. So on Sunday night it just looked stale, especially after Melania Trump’s neon dress at last week’s Republican National Convention besmirched the tone. (Rather than appear somehow nonpartisan, as political spouses often attempt to do when transcending the red-blue dialectic, it screamed, “LOOK AT ME, LOOKING BETTER THAN EVER, WHICH IS TO SAY IVANKA.”) More Balenciaga would have helped: Over the past few collections, the house has taken neon in a cool new direction, turning extremely online tones into something so vivid it’s almost decadent—the luxury hacker’s version of vantablack. But, despite its status as a hip-hop world favorite, Balenciaga’s hardcore magenta blouses and slimy green soccer uniforms didn’t make an appearance.

The VMAs are perhaps our foremost platform for nostalgia porn. The hypnotic blend of outrageous fashion and ersatz red carpet interviews that defined the ’90s and 2000s VMAs have been formative for the millennials who remember it and and the zoomers who do not, but for whom every photo and reference ever is available. For anyone under 40, the vision of Madonna in a blue satin Tom Ford-era Gucci blouse is as transfixing as that of Lil Kim in a sparkly nipple pastie, and in recent years, that has lent the awards show a costume party element as young attendees attempt to channel the icons of their (youthier) youth.

So we got things as strangely literal as Katy Perry and Riff Raff recreating Britney Spears and Justin Timberlake’s 2001 coordinating denim American Music Awards looks for the 2014 ceremony, but also less sentimental conjurings: last year, Lil Nas X invoked the glittering spectre of Prince and Diplo looked like the gnarly descendent of Nudie Suit scion Gram Parsons. But this year’s homages were thinner, like Bella Hadid doing vague Madonna cosplay in trousers and a sexy top that covered everything and nothing, or Miley Cyrus in mesh paillettes nodding mildly at Rose McGowan’s famous crystal drape dress. Madison Beer channeled the bandaged-bondage of ’90s Versace supermodel-mania. It felt like the Fashion Nova version of something we’ve seen on Tumblr.

Musicians are true champions for fashion: They’re creative enough to wear the stuff that actors are often too vain to embrace, and they see clothes as message-bearers rather than mere glamour. They were the first to see the potential of fashion as cultural currency, with their powerful stylists as clothes whisperers. But if these VMAs are anything to go by, the red carpet is in danger of clinging to the wrong past—the Coachella-fueled miasma of indistinct, mismatched references instead of something evocative or even directional, like when Cardi B seized the 2017 VMAs with a thousand different angles on spoiled-rich bravado.

How cool would it have been if designers, stylists, and musicians had just borrowed from designers’ archives? As Versace’s Spring 2020 collection—which pivoted, may we remind you, around a dress that Jennifer Lopez wore to the 2000 Grammys—showed, consumers are hungry for a reprisal of familiar fashion moments, and the realities of quarantine may make it easier than ever to dig up or recreate vintage looks rather than create something custom or new. (As hard as it may be to admit, Kim Kardashian’s Alexander McQueen dress at last March’s Vanity Fair Oscar Party was a prophetic template.) That still leaves ample opportunity to be creative and even make industry-wide ripples—or at least do something more interesting with neon.

Wholesale Isn’t Dead, It Just Needs to Take Risks, Return to Its Roots

Tue Sep 1 , 2020
Like the rotary phone or the cassette tape, the traditional wholesale model has fallen out of fashion and, in many ways, no longer suits the industry it served for so long. Retailers, once fashion’s tastemakers, have become risk-averse and trapped in a cycle of discounting, while small labels, which once […] 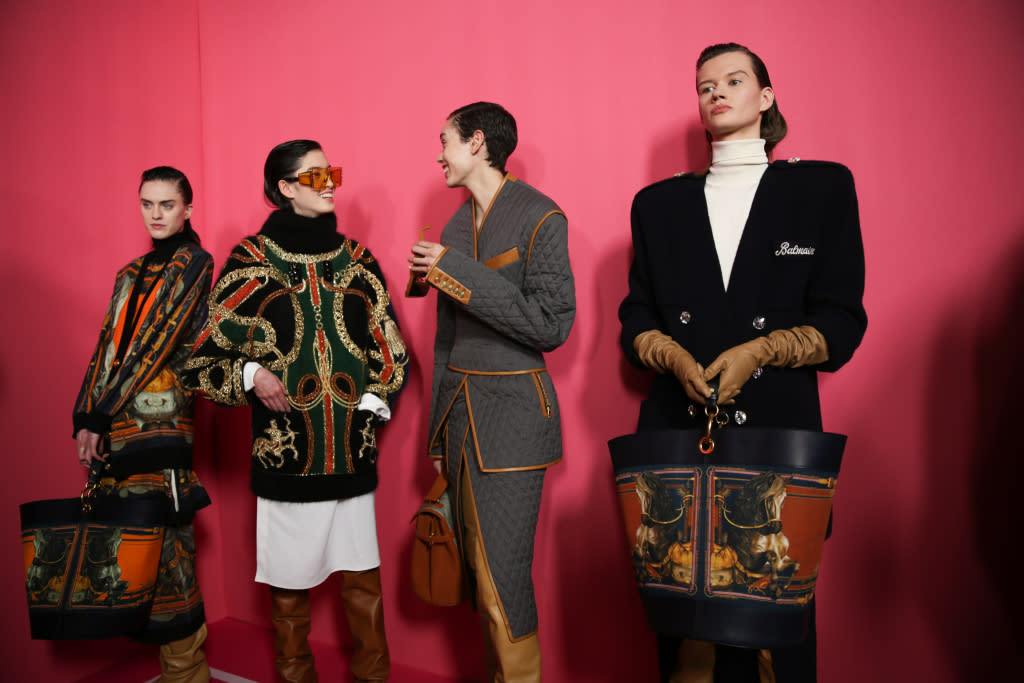