Like the rotary phone or the cassette tape, the traditional wholesale model has fallen out of fashion and, in many ways, no longer suits the industry it served for so long.

Retailers, once fashion’s tastemakers, have become risk-averse and trapped in a cycle of discounting, while small labels, which once relied on the big stores to broadcast their messages, can no longer afford to do business with them. Meanwhile, the rise of direct-to-consumer channels — both physical and digital — has made wholesale look and feel out-of-date.

It may be outmoded, but by no means is it dead: Retailers and brands alike are eager to find a solution for the model, and a range of industry experts would argue that, with a few pivots — and a willingness on the part of buyers and sellers to form new sorts of partnerships — wholesale can be updated for the 21st century.

For more than a decade — at least since the 2008 crisis — retailers have kicked around potential ways to refresh the shop floor, introducing concessions, pop-ups and takeovers. But they stuck to a model of buying from the brands, initially selling at full-price, discounting earlier and earlier — and returning the unsold merch, much to the chagrin of vendors.

Stores have also been their own worst enemies, demanding more frequent collections and exclusive capsules from brands and designers, asking them to make more and more stuff, so they can upsell the customer.

You’re a luxury outerwear brand? Why not churn out some sweaters or denim separates to slip under those puffers? Hey, kooky footwear label — can you do us some miniskirts and HotPants to go with those platforms? Until recently, the system generated so much stuff that the discount outlets, charity shops — and landfills — were overflowing.

The push for a more sustainable fashion cycle and the abrupt onset of COVID-19 have shed new light on the entrenched problems with the model, which has really been in decline for decades due to a variety of factors including the rise of fast-fashion chains; the luxury distribution model of owned retail, and the rise of digitally native, direct-to-consumer brands.

Over the past 30 years, independent multibrand retailers in France have seen their market share wither from about 40 percent to less than 10 percent today, while their Italian counterparts have been similarly hard-hit, according to Franck Delpal, a professor of economics at the Institut Français de la Mode, or IFM, in Paris.

Overall, the wholesale channel lost more than 50 percent market share for women’s apparel between 1990 and 2015, according to an in-depth report prepared for the Fédération Française du Prêt à Porter Féminin by Roland Berger.

The trend was echoed across the world between 2011 and 2015, according to that report, with the wholesale share of women’s ready-to-wear shrinking from 42 to 30 percent in Italy, from 60 to 45 percent in China, and from 34 to 27 percent in Japan. The wholesale share of market remained stable at about 42 percent in the U.S., with specialty chains losing share and online pure-players gaining.

There is no doubt the model needs to adapt — quickly — before it dies altogether, and most industry observers would agree that it’s up to the retailers to shift their mind-sets and their ways of doing business, ASAP.

They believe stores need to put customers first; collaborate more positively and efficiently with the brands they sell; rely on data — rather than instinct — for their buying decisions, and learn that less is more in every aspect of the business.

Delpal believes that, in order to succeed, multibrand retailers must differentiate in terms of brand and product curation, exclusivity or experience, and “buy closer to the market, and closer to the season. The season should be customer-oriented rather than business oriented,” he said.

Buying closer to the season would not only satisfy the customer — who could buy his or her coat in the fall, and bathing suit in the summer — but it would also make for less waste, and longer full-price sales periods.

Ed Burstell, who spent his career working for stores including Bergdorf Goodman, Liberty London and Neiman Marcus, and who now has his own consultancy, said the wholesale system is at odds with reality.

“The consumer does not have the appetite to wait six months for a delivery — they are constantly bombarded through social media and have shortened attention spans. Shifting priorities around purchases — fewer purchases that last longer — is the future. Social responsibility around human resources, the planet and sustainability are now the rule,” he said.

His recommendation for how to move forward? “Fewer stores, fewer and more meaningful collections, deliveries when the consumer wants them, and genuine social responsibility around diverse human resources, the environment and the planet.”

David Dubois, an associate professor of marketing at French business school INSEAD, echoed those thoughts and argued that stores need to prioritize sustainability, and become less cyclical and more transparent.

He believes the brands also have a big part to play and should be thinking about local production, personalization, or on-the-spot fashion to stay close to the season and to the consumer.

Dubois added that brands should be focusing on “conspicuous production” rather than conspicuous consumption, and make a shift from “the value chain” (pipeline, lots of waste) to “the circular chain” (recyclability, sustainable material).

He also talked about the need for “bottom-up” dynamics, rather than a top-down approach for stores and brands alike, and a “truly data-centric omnichannel strategy mixing offline and online,” whereas most brands and retailers today still separate both.

Indeed, some believe that data has an enormous role to play and should be trusted, and treated almost like a divining rod when it comes to wholesale purchasing.

One of the greatest risks a store can take is to put money on a brand, designer or specific collection only for he, she or it to flop on the shop floor. The margins on own-bought merchandise may be attractive, but not if the products fail to sell.

Christopher Suarez, the fashion entrepreneur and cofounder of the London-based clothing label Ssōne, which has been working with Matchesfashion.com on repurposing the retailer’s excess stock, said stores need to adopt a more data-driven model that’s geared toward the consumer.

“Stores need to buy better,” and let the data guide them, said Suarez. That way, they can minimize the risk of what they buy, while the fashion director can serve as the store’s “relationship builder” with brands, rather than having to take bets season after season.

The large luxury brands — such as Chanel, Dior, Gucci and Saint Laurent — know exactly how to limit the risk of what they buy for their own retail networks.

According to Gachoucha Kretz, a professor of marketing at HEC Paris, these marquee brands have learned to fill their stores and concessions with timeless, iconic products that carry over and accrue more pricing power.

The ultimate example is Chanel, whose quilted bags, two-tone shoes, little black dresses and tweed jackets recur in every collection because their appeal is enduring.

Suarez and Burstell directly addressed the need for large department stores, such as Harrods or Selfridges, as well as other multibrand retailers, to limit risk by betting on smaller labels, and helping them to grow.

Suarez, who cofounded Nicholas Kirkwood and served as its chief executive officer, eventually selling it to LVMH Moët Hennessy Louis Vuitton in 2013, said there needs to be “a true collaboration, and partnership” between the stores and the smaller brands and they need to share the risk of selling season after season.

The focus, he said, needs to be on “smaller quantities, and better sales,” with stores giving emerging brands “enough time and space to grow, and also showing them a clear path” of how to expand their presence on the shop floor.

In a report earlier this year, Luca Solca of Bernstein talked about the demise of wholesale, but said it still had its place in the luxury fashion eco-system. “High-reputation multibrand independent retailers will survive, but will be a niche. And they must go back to their brand scouting role,” Solca said.

Burstell believes there is still much room for retailers — once they scout the new brands — to help them grow.

He argued that, unlike marquee brands that have solid investment and retail networks, small labels or start-ups without cash behind them can be vulnerable when it comes to finding a sustainable sales model.

“This is exactly where stores as wholesale accounts could flourish — by investing and promoting new and diversified offerings to consumers,” he said.

That’s what happened in the old days: “Independent stores took risks on new products, and it’s what the Japanese stores are still doing today. Japan remains wedded to wholesale. It is extremely big,” said Paul Alger, director of international business at UKFT, the U.K. Fashion and Textile Association.

For years, Alger has been taking delegations of British designers around the world to trade shows and events, and has witnessed how stores such as Beams in Japan support a brand’s seasonal business by giving them deposits to produce upcoming collections.

“If these brands didn’t have the deposits, they could not afford to make the collections,” Alger said.

Kretz of HEC Paris would agree that a wholesale partner still has an important role to play in the life of certain brands.

“Wholesale is very important because not all the brands can go retail,” she said, citing Balmain as one example of a luxury brand that relies largely on the wholesale channel.

JW Anderson is also primarily a wholesale business, and the designer Jonathan Anderson took pains this season to ensure his stockists were able to buy even with social distancing and a ban on international travel.

For his resort and men’s spring 2021 collections, Anderson worked with HoloMe to create hologram images of models wearing the collections in a bid to re-create the live showroom experience for buyers, such as Bruce Pask, men’s fashion director of Bergdorf Goodman and Neiman Marcus.

“I was not going to give up on our buyers,” said Anderson during an interview from his studio in July. “We have to stick together, and get through the hard patch.”

Kretz also noted that wholesale is still the main channel to enter such big and vibrant markets as China, India and the Middle East. “Having wholesalers is actually a good thing and a good way to understand what the market would like,” she argued.

Buyers for specialty stores are also freer to choose than their counterparts, who are purchasing for outlets directly owned by the luxury brands, said Kretz, adding that the latter are often pressured by headquarters to buy certain items pushed by the brand.

Looking ahead, Suarez believes that stores should remain flexible in what and how they buy, and that larger ones, such as Selfridges, should adopt a “blended model” of own-bought merchandise and concessions. That way, they can broaden their offerings and spread the risk of buying, while keeping the customer at the heart of the business.

Tue Sep 1 , 2020
More from WWD According to an August survey of 2,360 individuals conducted by RetailMeNot with SurveyMonkey, three out of five consumers are planning to spend the same amount — or more — than last year, and 35 percent report a willingness to try new brands this season. 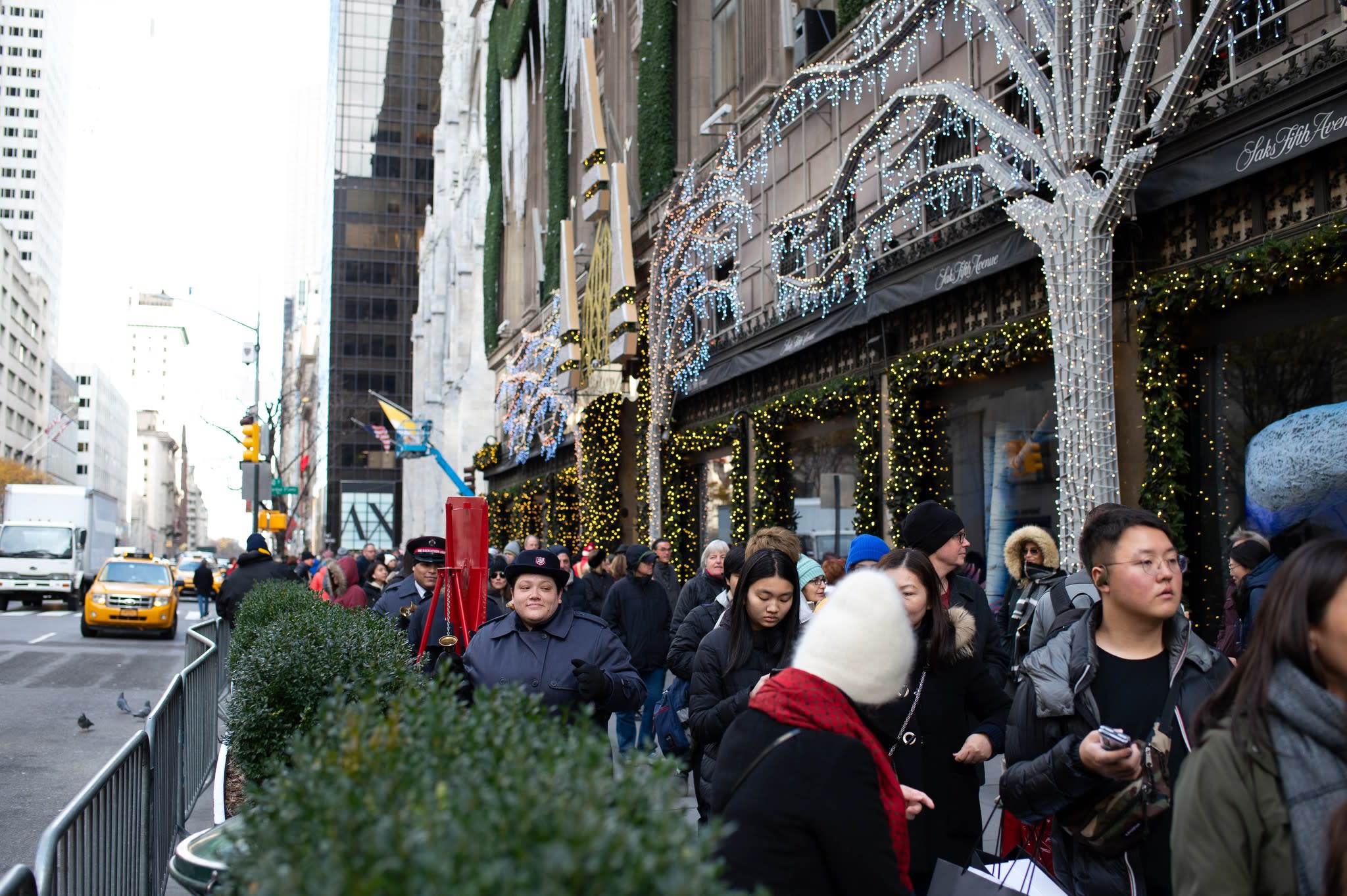