LONDON — Burberry is looking to break new retail ground in Shenzhen, China, today with a store that fuses physical and digital elements and asks shoppers to press their WeChat accounts into action as they game their way around the store, making virtual, and real life, discoveries.

The 5,800-square-foot store spans 10 rooms and was created in collaboration with WeChat’s owner, Tencent. Opening on Friday in the new Shenzhen Bay MixC development, it wants to offer the world’s most sophisticated digital audience experiences that can straddle both their online and physical worlds.

Thanks to a custom-made, mini WeChat program, the store offers games, personalized experiences, and the opportunity for customers to build and spend “social currency,” all in a hyper-polished, futuristic environment.

“We can’t think anymore about e-commerce and physical stores as two separate channels. There is a customer who will buy, communicate, view content, and have experiences online or offline. That just depends on their wishes, and how they feel in that moment,” said Burberry’s chief executive officer Marco Gobbetti in a telephone interview ahead of the opening.

“What we wanted to do in this store — and what we think we’ve accomplished — is to create a seamless continuity, online and physical experiences that merge in store. In this store, you can continue to learn about the brand and the products, you can discover new information, you can unlock new content.”

Gobbetti said that while the luxury customer’s journey often starts online, it gets interrupted once they walk into a store because, all of a sudden, they’re having to interact with the brand in a different way. On the flip side, he said it’s rare for customers to take exciting in-store experiences back to their social channels.

With the new store, he argued, there’s no interruption between digital and physical.

“The more you engage, the more you unlock, both in terms of content, features, experiences. You can take those experiences back online and onto your social platforms, share them with your community, your friends and family. It really is about connecting, joining the dots between social and physical. I think it is going to be a lot of fun.”

Despite the challenges — and ongoing repercussions — of COVID-19, the British brand has seen a strong bounceback in China, which generates about 40 percent of Burberry’s overall revenues. Since lockdown eased earlier this year, the company has pursued a variety of successful product campaigns and pop-ups in China and South Korea, which has also been showing robust growth.

The Shenzhen social retail store, which was originally supposed to open in April, is the high point of Burberry’s work in China this year and the concept could be rolled out to other locations inside and outside China.

Gobbetti said Tencent was a natural choice, as the Chinese tech giant had been a Burberry partner for years and because “it owns the social conversation in China.” He said Tencent also understood “how natural, and at the same time, how — hopefully — revolutionary” the concept of social retail can be.

Davis Lin, senior vice president at Tencent, described the store as “the starting point for a new era of innovation” and said the blending of physical and digital environments would help to build brands’ “deep emotional connections with consumers, and support the laying of strong foundations” for their long-term growth.

Among the store’s whiz-bang features are an interactive front window with a living sculpture, inspired by the mirrored runway from the Burberry’s fall 2020 runway show.

The window reflects the viewer’s shape and responds to dance and body movements. It’s meant to create a moment that can be captured and shared on a mobile device. The window will evolve through the seasons to reflect the latest collections and house codes, Burberry said.

Shenzhen is also the first Burberry store to include scannable QR codes on product swing tags. Scanning the QR code unlocks an array of content, including product details, styling tips and runway clips. Scanning also helps customers to build their social currency and “level up” — as gamers would say — during the store journey.

Social currency is paid out in the form of cartoonish little animals such as baby deer and a bull with a nose ring. Customers start with an egg, move on to the deer and then, if they make a purchase, buy a coffee, or “like” Burberry on social media, they can level up and dress the deer in mini versions of Burberry clothing and accessories, or win other perks. Visitors can also share rewards with friends or family.

Customers can access the store’s WeChat mini program from home, and earn currency without leaving their sofas. Other customers can browse and shop the new Shenzhen store without needing a mobile device.

Even the menu at Thomas’s Café Shenzhen is interactive: As customers’ social currency advances, they can unlock special menu items. The café itself is meant to be a dynamic space, and can be converted into an area for talks, workshops, exhibitions and live performances, with bookings made through the dedicated WeChat program.

The store houses three fitting rooms, each with its own creative concept that draws on Burberry’s house codes, including the animal kingdom and the TB monogram. Customers can pre-book their preferred room — and the clothing they want to try on — through the mini program. Each room has a dedicated library of playlists.

Once customers have built up a serious mass of social currency, they can unlock the big-ticket prize, the Trench Experience. They win a key and are able to unlock the Trench Room, which has been designed as a “digitally immersive journey through nature,” that aims to create “unique and personal content for the customer to share on social media.”

Burberry declined to disclose any more details of what, exactly, the room has to offer.

Riccardo Tisci, chief creative officer at Burberry, said he remains fascinated by the balance between nature and technology, and the energy that connects the two. He integrated both into the store design, which features fixtures and plinths constructed in a variety of materials and textures, from plywood to mirror and high-gloss finishes.

The color palette is beige, pistachio, pink and blue and features the TB Monogram and the fawn print.

“The store draws upon the digital world, but balances it with emotional and personal connections,” said Tisci.

“That is my vision for fashion — the juxtaposition of these incredible digital experiences, with a true physicality. The amazing otherworld-ness offered by the technology also needed a grounding in reality. That is why it was so important to me to weave references to nature throughout the store. It’s what makes this store and concept so unique — it completely blends both worlds,” the designer added.

Tisci has also designed the Shenzhen capsule collection, which is exclusive to the store and contains casual pieces for men and women.

There are T-shirts, sweatshirts and washed denim jackets with a metallic logo appliqué, and jackets in the TB Monogram print made in Econyl fabric, a sustainable nylon yarn made from regenerated fishing nets, fabric scraps and industrial plastic. The store is also carrying the TB Summer Monogram collection.

This is just the beginning of Burberry’s adventure in social retail, however.

Gobbetti described Shenzhen as a testing ground “around experiences, but also around content and customer engagement. There are a lot of ideas there, a number of which we thought of during the process of creating the store, ideas we couldn’t necessarily include,” he said.

“We think that this is going to be a natural evolution of retail and we definitely want to see” what works, and what doesn’t, and what more the company can do. “There will certainly be an evolution of this to another store.”

He added that China was the ideal place to pilot the project: “There is a customer base, particularly the younger generation, that is hyper-connected and savvy digitally and from a fashion point of view. So, clearly, it’s the perfect target. Then, we’ll look to explore the possibility of taking this to other countries as well.”

For the moment, China remains the big focus: Burberry is planning a series of socially distanced events this week and next to mark the opening of the store, and Gobbetti has even left open the possibility of staging the Shanghai fashion show, which was originally set for last April, and which had to be canceled due to the coronavirus, at some point in the future.

Fri Jul 31 , 2020
PARIS — Despite an easing of border restrictions in Europe, retailers, hotels, restaurants and other businesses in the region’s fashion capitals that rely on the tourism industry are struggling to cope with the disappearance of international visitors — with little sign they will return in significant numbers in the near […] 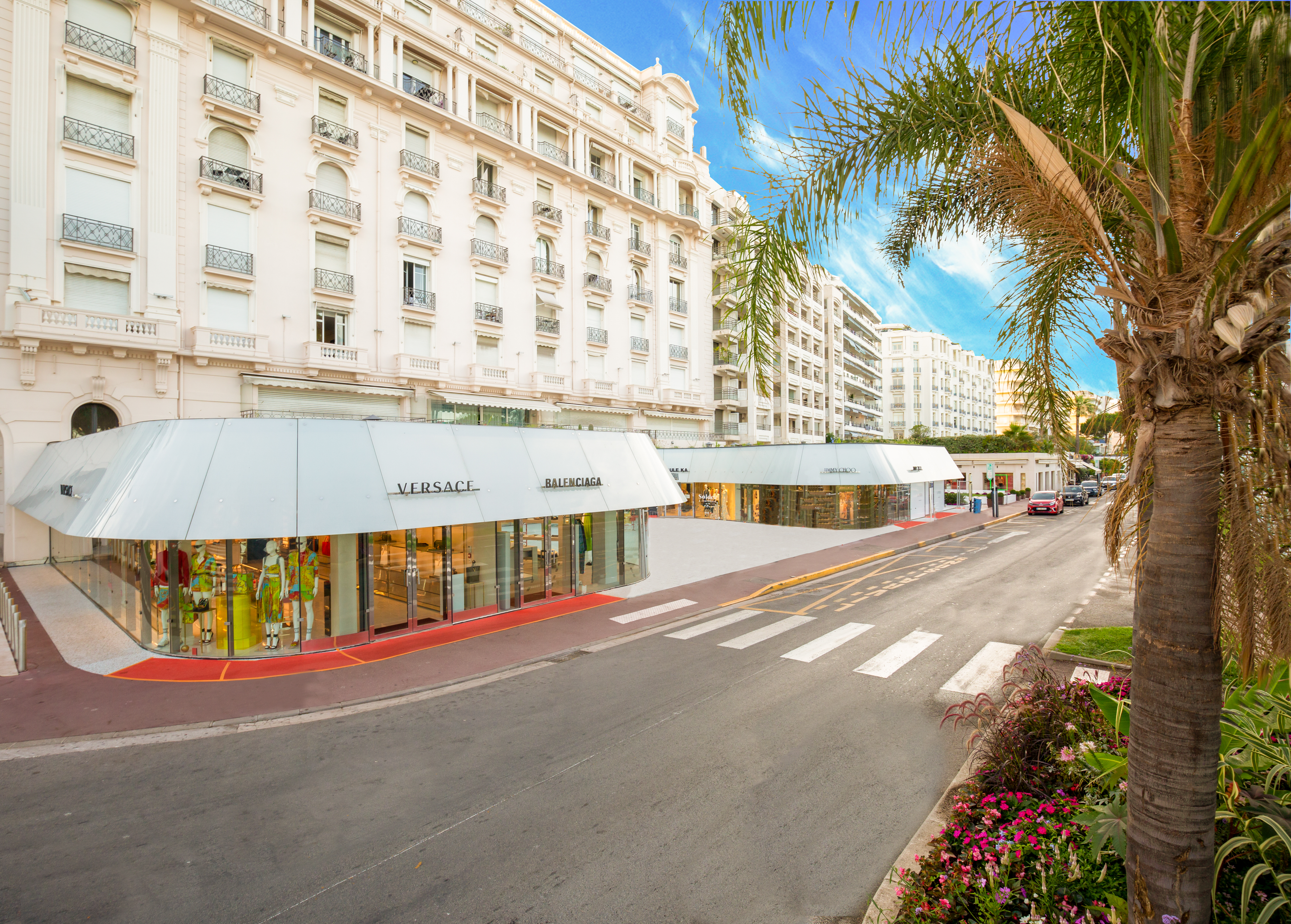