What are the benefits of an online festival premiere? It’s been the question on the lips of filmmakers, sales agents, distributors and exhibitors since festivals had to stop operating as physical entities. Venice marked a return to a more traditional way of doing things, while Toronto’s hybrid dance of digital industry and physical public screenings offers a different alternative. But should filmmakers accept invitations to premiere their films at purely virtual festivals?

Now that several online festivals have taken place – CPH:DOX, Locarno and Sheffield Docfest – a consensus is emerging about the efficacy of premiering films online.

Sales agents have discovered that with the right movie, digital festivals can be as profitable as physical festivals.

Filmmakers are missing the experience of meeting audiences and the press and reporting that the consumer media is less interested in digital platforms.

For distributors, it’s a case of plus ça change as they had already moved much of their business online before the virus hit.

Opinions on digital releases have been changing fast. When the pandemic was declared, New Europe Film Sales CEO Jan Naszewski told Variety, “We would never do [an online world premiere launch] for a premier festival.”

Their resolve was tested and broke when the Cannes Label offered a spot to one of their films, Magnus Von Horn’s “Sweat,” which ironically is about a social media influencer. Suddenly they were faced with a digital premiere for a new title.

“We had a call where we were like: Okay, we accepted the Cannes Label, now what?” says Naszewski. “Should we show it to the press and tell them not to publish reviews until there is some kind of physical festival?”

New Europe Film Sales decided to treat it like a “normal” premiere. It was a decision that would go better than expected. Naszewski says: “The sales for ‘Sweat’ were pretty much the same as they were for ‘A White, White Day’ [which premiered at Cannes in 2019], so the lack of physical market didn’t hurt us.”

“Sweat,” pictured, had five to six offers from France and the U.K. Naszewski adds, “The key was that we were maybe one of three-to-four movies that really went for it during the Online Marche and were not confused about having the Label.”

Another film that had a remarkable Cannes Label launch was Totem Film’s “Gagarine,” directed by first-timers Fanny Liatard and Jérémy Trouilh. Totem’s Agathe Valentin says, “We spent the lockdown talking to distributors trying to see what their mood was, and they were all telling us we will be careful; we’re not in the mood for buying.”

Nonetheless, Totem believed in the film. “We launched the film as if it was a normal market,” says Valentin. “We hired Wolf Consultants as publicists and took some advertising out in the trades. We also decided to screen the film in the virtual market.”

The film landed with positive reviews. Valentin says, “There were different calls and bidding wars. We couldn’t meet with people in-person, but in the end, it was almost the same.”

Valentin adds, “We will never know if the film would have had such a success in a normal Cannes.”

The experience will have long-term consequences. “We may now go to fewer festivals because we know we can conduct sales digitally,” says Valentin. However, it’s still not a substitute for the physical experience. “I’m looking forward to festivals happening again.”

Valentin is also aware that not everyone had a positive outcome. “A lot of other sales agents reported that there was little happening.”

For filmmakers, the online experience is lackluster. Not even winning awards can alleviate the frustration of not seeing a film with an audience. Estephan Wagner and Marianne Hougen-Moraga co-directed the CPH:DOX winner “Songs of Repression.” The film also took a Danish critics’ prize.

“You have two choices: either you go online or you wait and if you wait it’s so uncertain,” says Wagner. “Having real festivals is better for meeting the audience and the industry, but also in terms of sales. Many streaming platforms are opposing online festivals, telling people that if they want to make a sale, they should stop participating.”

Hougen-Moraga adds, “The awards gave us a lot of attention, especially in Demark. I can imagine if it had gone online and received no attention, it would have been difficult.”

The main difference Wagner noted compared with previous films, “The media is so overwhelmed with COVID -19 that is hard to break through.”

Director Charlene Favier’s “Slalom” also received the Cannes Label. “It’s a pity when you make a film for cinema to have it screened online. But it’s been a great adventure and I was thrilled to discover that the first feedbacks from the press, buyers and festivals have exceeded my expectations.”

Filmmakers don’t view the digital premiere as their official premiere. “I’m very lucky because the world premiere of my film will happen at the Angoulême Francophone Film Festival, which luckily has a physical edition this year. I can’t wait to exchange with the audience!”

At preview screenings, some films screening digitally at Toronto have asked trade reviewers to hold fire on writing reviews until the physical screening in San Sebastian. The status of online premieres is unclear.

Robert Beeson, who runs British distributor New Wave Films, says that online festivals have not changed his buying strategy or practices. “We are used to judging films via links.”

As far as prices, he says, “Prices must drop even more than they did in the last couple of years. For some years, TV has had their hands in their pockets – now those hands are firmly placed under their buttocks. Plus with cinemas at under 50% capacity, the maths is not hard to think through. When a tentpole comes along, the cinemas will dump nearly every other film to fit in reduced capacity shows to equal the seats they would have had pre-COVID.”

As the Toronto International Film Festival goes virtual, these directors are just happy to be seen

Fri Sep 11 , 2020
Frances McDormand in “Nomadland,” which Searchlight Pictures will release later this year. (TIFF) The season of fall film festivals is typically one of year-in, year-out rituals and repetition. This year, thanks to a global pandemic and international travel restrictions, all of that has changed. Having started on Thursday night, the […] 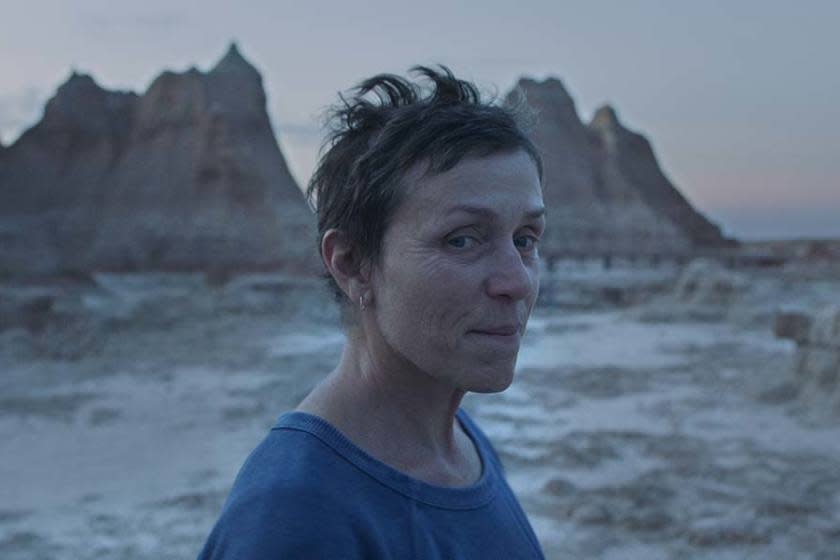