By Emma Pinedo and Nathan Allen

MADRID (Reuters) – Spain said on Monday it hoped to convince Britain to exempt the Balearic and Canary islands from a sudden quarantine, and other Spanish regions said they also felt unfairly penalised by the sweeping British move.

Britain on Saturday shocked Madrid, and holidaymakers, with an unexpected 14-day quarantine on travellers coming from Spain, citing a sudden jump in COVID-19 cases, in a blow to a tourist season already hanging on by a thread.

“We are sailing through waters whose maps and characteristics are unknown to us, what we have to do is to regain that confidence and that element of security that is essential for tourist activity”, Agriculture Minister Luis Planas told Antena 3 TV station.

Since ending its nationwide lockdown a month ago, Spain has been grappling with a rapid proliferation of new cases, with the infection rate approaching 1,000 a day by the end of last week.

However, with the bulk of new clusters concentrated around the northeastern regions of Catalonia and Aragon, Britain’s blanket quarantine has been criticised as disproportionate.

While Catalan leader Quim Torra warned on Monday that stricter restrictions could be needed if the local outbreak continued to expand, other regions felt they had been unfairly penalised.

“What we’d like is for quarantines to be lifted on the islands as early as possible, and we hope it will be today rather than tomorrow,” Tourism Minister Reyes Maroto said.

Authorities in Andalusia, home to the tourism-dependent Costa del Sol, and Valencia, which includes the popular Benidorm resort, were also seeking exemptions.

“Our epidemiological data are better than the UK’s,” Valencian regional leader Ximo Puig told Cadena Ser radio. “I don’t understand why you would make a decision like this with such a broad brushstroke.”

Tour operators, airlines and hotel groups, already struggling after the pandemic brought global air travel to a virtual standstill, have also hit back at the measure.

Melia Hotels and NH hotels shares plunged around 6% and 5% respectively on Monday morning, while other tourism related stocks like British Airways parent company IAG, or the online travel group Edreams Odigeo shares were down more than 8.5% and 6.6%, respectively.

The Managers Betting on the Big Travel Bounce Back

Mon Jul 27 , 2020
Cruise ship in the harbour Shares in airlines slumped as the UK re-imposed restrictions on travel to Spain, with companies like BA and Iberia owner IAG (IAG) nursing double digit losses. Ryanair (RYA) also announced a £162 million loss for the lockdown-affected quarter and said this year has been the toughest […] 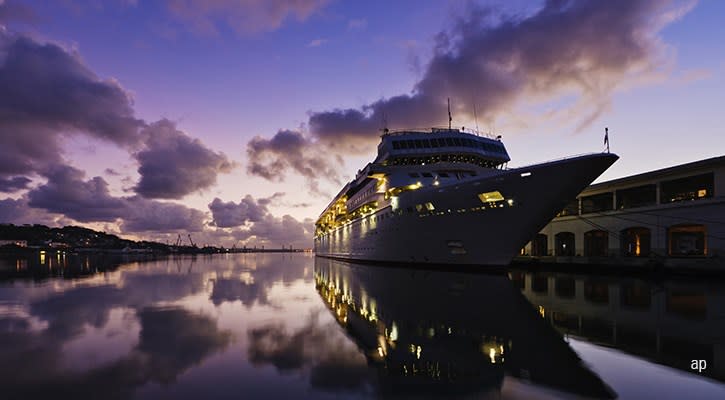