The Venice Film Festival on Tuesday unveiled a rich roster of films by prominent auteurs spanning the globe, such as Mexico’s Michel Franco, France’s Nicole Garcia, Japan’s Kurosawa Kiyoshi, and from the U.S., Oscar-winning veteran Fredrick Wiseman, all set to grace the lineup of the Lido’s watershed 77th edition.

The fest is on track with plans to hold a physical event in September, the first major international fest to do so after the coronavirus crisis.

The much smaller — and way more indie — American presence this year will also include the world premiere of a buzzy new film by Brooklyn-based Mona Fastvold (“The Sleepwalker”) who will launch her second feature, “The World To Come,” a period drama with two women at its center and a starry cast comprising Katherine Waterston (“Fantastic Beasts and Where to Find Them,”) Vanessa Kirby (“The Crown”) and Casey Affleck, who is also the pic’s main producer.

As previously announced, Venice — which, barring complications, will be held on the Lido Sept. 2-12 — will have a somewhat reduced, but still substantial lineup.

Though artistic director Alberto Barbera has done away with some sidebars in order to implement social distancing and other sanitary protocols, Barbera has kept the core of the fest’s official selection intact, both in terms of the lineup structure, as well as the number of titles — roughly 60 — that will launch from the Lido in the main sections.

The out-of-competition section also includes Alex Gibney’s doc “Crazy, Not Insane” that examines the psychology of murderers based on research by forensic psychiatrists, according to promotional materials.

Barbera at a virtual press conference said that delegations from all films have been invited to the Lido and that he expected talent from a substantial number of films to make the trek. There will be a socially-distanced red carpet.

To contend with social distancing norms in its venues, the festival is setting up two outdoor arenas: one in Venice proper and another on the Lido, where a large part of the festival’s non-industry audience will be watching the films. The international press contingent present on the Lido is expected to be much smaller than usual. Online coverage of press conferences and other events will be an available option.

As previously announced, Chloé Zhao’s road drama “Nomadland,” starring Frances McDormand, will screen at Venice and Toronto simultaneously on Sept. 11, in both cases preceded by virtual introductions. Barbera said he sees “Nomadland,” which is about nomadism in the U.S., as a strong Oscars contender. This Searchlight Pictures title and “The World to Come,” from Sony Pictures, are the only Hollywood studio pics on the Lido. Netflix, which had a close rapport with Venice in past editions, is noticeably absent.

Vying for a Golden Lion, there is Michel Franco’s hotly anticipated “Nuevo Orden,” set in a dystopian Mexico City; from Japan, Kurosawa Kiyoshi’s period suspense romancer “Wife of a Spy”; from Israel, Amos Gitai’s “Laila in Haifa” about a disco in Haifa frequented by Israelis and Palestinians; from Iran, Majid Majidi’s “Sun Children,” about child labor in his country.

The robust European contingent will see French actor-turned-director Nicole Garcia’s thriller “Lovers” (AKA “Lisa Redler”) toplining Stacy Martin as a woman named Lisa, who, while on vacation with her husband, rekindles a passionate affair with her ex-boyfriend; Poland’s Malgorzata Szumowska (“Body”) will launch her “Never Gonna Snow Again,” co-directed with Michal Englert and starring “Stranger Things” actor Alec Utgoff in the title role as an industrious Ukrainian migrant worker in Poland who makes house calls as a masseur in a middle-class gated community. From Hungary, there is Kornél Mundruczó’s drama “Pieces of a Woman” starring Shia Lebouf and Vanessa Kirby – who will be doing double Venice duty, since she also starts in “The World to Come.” In “Pieces of a Woman” Kirby plays a woman grieving a home birth gone tragically wrong. Andrei Konchalovsky is in competition with “Dear Comrades,” reportedly based on the 1962 massacre of Soviet workers demonstrating for better working conditions in the southern Russian town Novocherkassk.

The U.K. is repped out-of-competition by art heist comedy “The Duke,” directed by Roger Mitchell, starring Jim Broadbent and Helen Mirren, based on the true story of a taxi driver who in 1961 stole a Goya painting from the National Gallery in London.

At the virtual press conference Barbera underlined that “almost half” the films in competition are directed by women and “were selected exclusively on the basis of their quality.” Barbara in the past had come under fire for scarce representation of female directors in Lido slots. Of the 18 movies competing for the Golden Lion, eight are by female directors.

Greek director Christos Nikou’s debut feature “Apples,” an offbeat comedy that plays on the tricks that memory plays on humans, will open the cutting edge Horizons section. Nikou is a former assistant director for filmmakers including Yorgos Lanthimos.

The Horizons section will also see U.S. director Gia Coppola (“Palo Alto”) return to Venice, this time with “Mainstream,” a cautionary tale about the devastating power of social media, according to promotional materials. The cast comprises Andrew Garfield and Jason Schwartzman.

The recovering Italian film industry will be looking to Venice as a catalyst for its restart. Leading the Italian pack in competition is high-profile doc “Nocturne” by Gianfranco Rosi, winner of a Berlin Golden Bear in 2016 for his migration documentary, “Fire at Sea,” and of the Venice Golden Lion before that for “Sacro GRA.”  Rosi’s latest is a look at life at night across the Middle East, including war zones and hot spots.

The other hot Italo title in competition is “Miss Marx,” an English-language biopic by Susanna Nicchiarelli (“Nico, 1988”) starring Golden Globe nominee Romola Garai (“The Hour”) as Karl Marx’s younger daughter Eleanor, one of the first women to approach the themes of feminism.

As previously announced, Venice will open with the out-of-competition premiere of Daniele Luchetti’s anatomy of a marriage drama “Lacci” (“The Ties”) which had been tipped for Cannes and stars Alba Rohrwacher (“Happy as Lazzaro”) and Luigi Lo Cascio (“The Traitor”) as the couple at the film’s center. “Ties” marks the first Italian film to open Venice in 11 years.

Appropriately, the fest’s pre-opening film will be native Venetian Andrea Segre’s doc “Molecole” shot in Venice when the lagoon city was in lockdown.

As previously announced, Cate Blanchett will preside over the main jury and Tilda Swinton and Hong Kong filmmaker Ann Hui will be honored with Golden Lions for career achievement. U.S. producer Christine Vachon, whose Killer Films executive produced “The World to Come,” is on the Horizons jury. Hui will premiere her “Love After Love” out-of-competition.

The fest’s informal market, which is called the Venice Production Bridge, will be held as usual on the third floor of the Hotel Excelsior with some components also taking place online. Virtual one-to-one meetings regarding the 52 projects from all over the world that are in the final phase of development and funding being presented at the Venice Gap Financing Market will also be organized online for accredited professionals who are unable to travel to Venice.

OUT OF COMPETITION – Fiction

OUT OF COMPETITION – Non-Fiction

OUT OF COMPETITION – Special Screenings

“The Best is Yet to Come,” Wang Jing (China)

Tue Jul 28 , 2020
The rise of remote working has made the global office more appealing than ever For the thousands left unexpectedly facing quarantine on return from their holiday in Spain after this weekend’s abrupt change to travel restrictions, there is, perhaps, an alternative: what if they just stayed there? Indeed the world […] 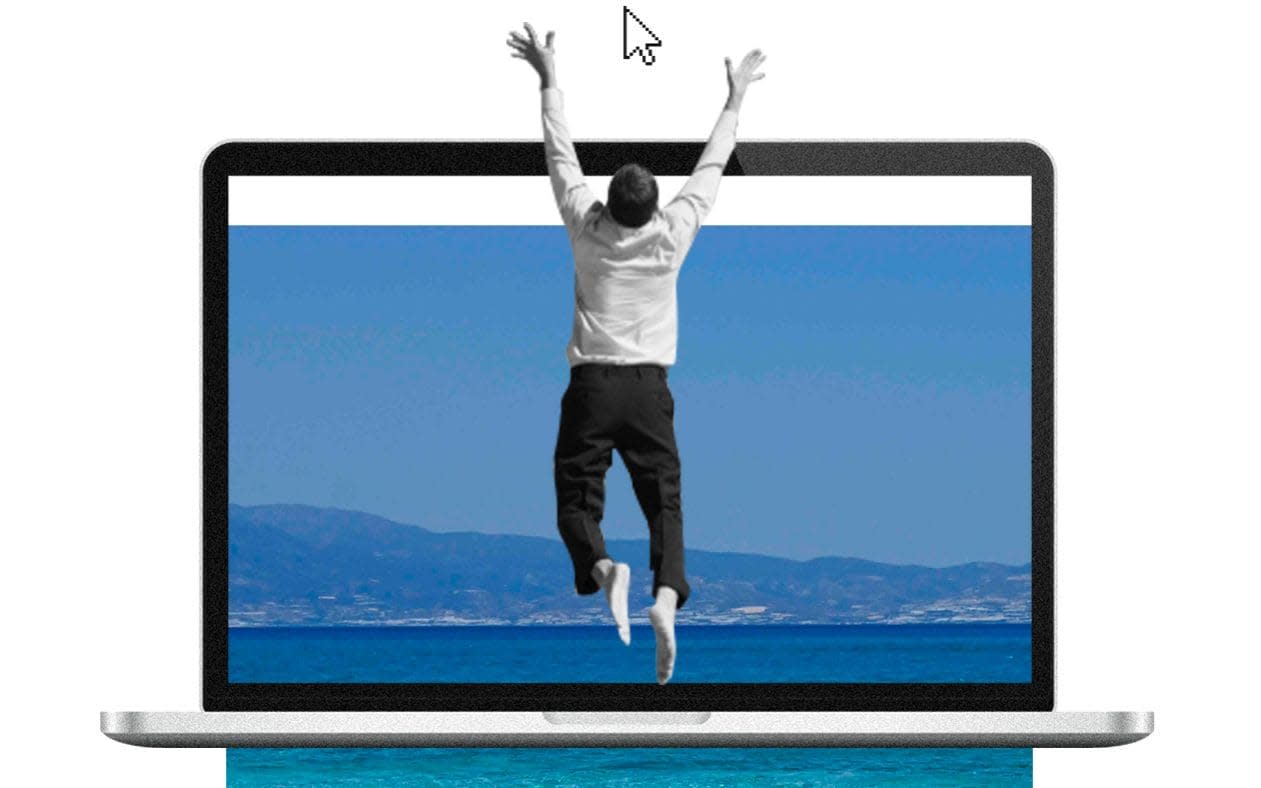