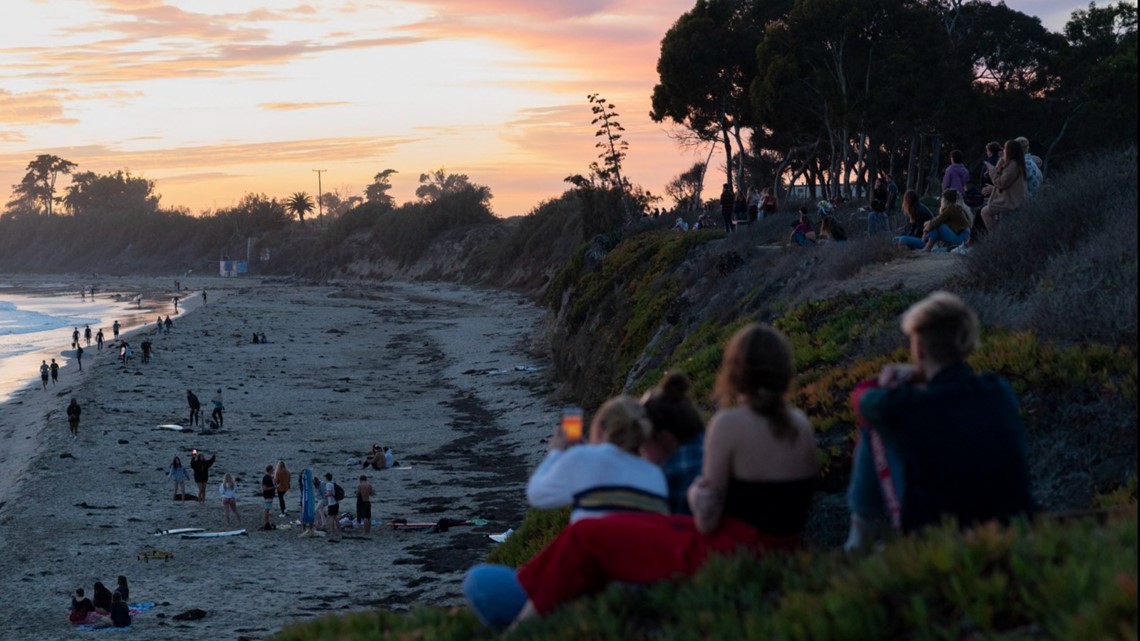 Administrators who’ve scrapped the breaks say the spread of COVID-19 among students shows that encouraging travel, as a longer break would do, is just too risky.

SAN DIEGO — Carlos Acosta’s fall semester at the University of Southern California was a lot more grueling than he expected — and it wasn’t just because of the Zoom classes.

In an effort to minimize travel during the coronavirus pandemic, the university shortened the semester so it ended before Thanksgiving, and didn’t include any multi-day breaks. But the condensed schedule, Acosta said, came with consequences.

“Having no breaks did not allow me to catch up with any of my assignments nor responsibilities nor my mental health; they just kept piling up,” the senior industrial and systems engineering major said. “I felt incredibly overwhelmed, so much so that my hair started falling out.”

That challenging semester may be over. But now Acosta, currently recovering at his family’s home in Miami, is worried about the next one. Like a number of colleges across California, USC is swapping its traditional spring break for five single-day breaks scattered throughout the semester, in hopes of cutting down on the spread of COVID-19.

Other California colleges canceling spring break include San Diego State University, Pepperdine University and California Lutheran University — Sacramento State University is considering doing it, too — in what’s becoming a national trend.  University administrators who’ve scrapped the breaks say the spread of COVID-19 among students living on and around campus shows that encouraging travel — as a longer break would do — is just too risky.

But some students and mental health advocates argue spring break is not just about partying and, unlike single-day breaks, would provide a needed respite in what has been an unusually stressful year.

Some students are protesting and signing petitions asking their colleges to reconsider.

USC’s chief health officer, Sarah Van Orman, said that while she understands the mental health benefits of a spring break, the risks outweigh them. Even with online classes, an estimated 50 to 60 percent of students moved into housing near campus in the fall, she said.

“We saw some of the same surges in cases, outbreaks in the areas around USC that institutions that were sort of ‘open’ did. So from my perspective, even if we don’t have in-person instruction, we know that students will do that again,” she said.

That heightens the risk of a longer break, Van Orman said. “We knew very early on that spring break would not be a safe thing to do, and I think that’s the position that many institutions are in.”

Private colleges are divided on whether to bring students back to campus in the spring — some are planning to while others are sticking to remote instruction as COVID-19 cases continue to surge. California State University and most University of California campuses have said they will remain largely online in the spring, with some graduate classes and clinical labs allowed to operate in person. UC San Diego is the notable exception; the university will house around 11,000 students on campus for winter quarter and plans to hold in-person classes in outdoor tents.

Spring break isn’t off the table for all schools, though. Those that are keeping it include Occidental College and the five undergraduate schools in the Claremont Colleges Consortium, where college leaders reinstated the vacation after students, weary from an accelerated fall semester, revolted.

“In exploring this issue, it became clear that our students (like students elsewhere) are experiencing new levels of stress and strain as they continue to adapt to a COVID-19-era living and learning environment,” she said.

Most other UC campuses have built-in breaks in between quarters, and the California State University system is letting individual campuses decide whether to offer a spring vacation.

Sacramento State psychology department chair Rebecca Cameron said at the meeting that students need multiple days in a row to adequately decompress from their daily routines.

“You don’t just instantly turn on and turn off when you’re in a chronic state of activation,” she said.

Cameron said single-day breaks may offer recovery for some, but likely not the students under the greatest stress — those with family responsibilities, who have lost jobs, or whose communities are disproportionately impacted by COVID-19.

“The people who are going to be most harmed by it are the people who have maybe less power in that situation to begin with,” she said.

Students who oppose ending spring break echo the concern about single-days off. Just as employees with unlimited vacation time don’t always take advantage of it, students say they’re likely to continue working on single-day breaks if their workload doesn’t decrease. If students have four assignments due the day after a break, they’ll use it to do their homework instead of relaxing, said Acosta, the USC student.

Administrators at schools that have canceled spring break say they are directing professors not to give assignments due right after single days off.

But those reassurances aren’t convincing to students like those at the Claremont Colleges.

After a sped-up fall semester with no breaks and Saturday classes, students vented in a survey and articles in the student newspaper about their stress and exhaustion. But when the spring academic calendar for the 6,000-student consortium was revealed Oct. 20, it didn’t include a multi-day break. In the following three days, more than 1,500 individuals signed a petition calling for the reinstatement of the traditional week-long spring break.

Pitzer Student Senate President Becca Zimmerman helped organize the petition and said the hectic pace of fall semester, plus the adjustment to online classes, showed how important breaks are for students’ and faculty members’ wellbeing.

“You’re cramming in all of these little assignments that don’t really mean that much, but you have to do them every day—whether it’s, like, a discussion board post or a daily response paper or watching a video and then taking a (quiz),” she said. “It’s really easy to let go of the bigger picture things like research…. Faculty advisers are overwhelmed, and everyone’s capacity to function is significantly limited.”

Last week, Pitzer College President Melvin Oliver said the Claremont Colleges would reinstate the spring break since students wouldn’t be returning to campus at the start of the semester.

At San Diego State University, where more than 1,700 students and employees have contracted the coronavirus, a university senate meeting devolved into chaos Dec. 1 as senators prepared to vote on dispersing the spring break into a series of single “rest and recovery days” throughout the semester.

Students shouted down senators and each other before administrators abruptly ended the Zoom meeting. The senate voted on a separate call for the “rest and recovery day” proposal, the Daily Aztec reported.

“What we did was we tried to distribute these days throughout the semester so students would still have the breaks that they need,” Vice President of Student Affairs and Campus Diversity J. Luke Wood said. The director of SDSU’s School of Public Health said modeling showed the move would reduce COVID-19 transmission among students by as much as 30%.

But Christian Holt, the president of San Diego State’s student government, argued students’ safety could also be ensured by pausing in-person classes for two weeks after spring break. He pointed out that COVID-19 cases rose after the university initially failed to routinely test students for the virus when they returned to campus this fall for a combination of online and in-person classes, a practice they’ve now begun.

“Justifying an alternative spring break proposal…in the name of public health is buying into the agenda of scapegoating universities and university students for the county’s, state’s and the country’s lack of control over a global pandemic,” he said.

After the vote, students quickly took to social media to express their frustration. An online petition to restore the break had garnered more than 15,000 signatures as of Dec. 9.

“Having random days off in the middle of the semester is not a break,” said Mark-yves Gaunin, a senior who works in the residence halls and signed the petition. “I mean, we’re gonna burn out. We need a break… (to) recoup and just have something to look forward to before finals season.”

Canceling spring break, Gaunin added, would not stop the social gatherings that have helped to spread the virus.

“Not having in-person classes, not having residence halls open at all, not having people in the SDSU area at all? That would have prevented parties,” he said.

Reagan is a fellow with the CalMatters College Journalism Network, a collaboration between CalMatters and student journalists from across California. Bobrowsky and Forschen are contributors to the network. This story and other higher education coverage are supported by the College Futures Foundation.