The Los Angeles Times is committed to reviewing new theatrical film releases during the COVID-19 pandemic. Because moviegoing carries inherent risks during this time, we remind readers to follow health and safety guidelines as outlined by the CDC and local health officials. We will continue to note the various ways readers can see each new film, including drive-in theaters in the Southland and VOD/streaming options when available.

The one thing we all knew in advance about Christopher Nolan’s time-twisting adventure “Tenet” was that it would be a very complex affair. While the exact content was kept secret, pre-publicity cannily stressed the story’s inscrutable intricacy; cast member Kenneth Branagh said reading the script was “like doing the Times crossword puzzle.”

That doesn’t mean that Nolan has made some sort of multimillion-dollar “Last Year in Marienbad” — rather, a full-on blockbuster that caters both to action fans and to viewers more inclined to speculative chin stroking. Much of “Tenet” consists of spectacular, full-firepower stunt numbers, but with pauses for us to take a breath and go, “What just happened?” — and then, after another breath, “And why, exactly?”

Scripted by Nolan, the film stars John David Washington as a protagonist — known just as “the Protagonist” — on a mission to save the world, equipped with one word, “tenet,” to aid him. As it happens, “Tenet” has indeed become a magic word for the global film industry, with hopes riding on Nolan’s film to draw audiences back into cinemas after months when coronavirus lockdown brought theatrical releasing to a standstill.

“Tenet” has attained a quasi-mythical status in the business, given several delays in its release since the originally announced July 17, so much that people began to jokily wonder on social media whether the film actually existed (the best Twitter gag, given “Tenet’s” time-reversal theme, was the release might eventually be put back to August 2018).

While other studios have opted to stream some major titles, Nolan and Warner Bros. have enhanced the prestige of “Tenet” by holding out for theatrical release — with the film premiering in multiple territories on Wednesday and opening in the U.S. on Sept. 3. (Domestic “sneak” preview screenings begin Aug. 31, though there is no California opening date in sight since indoor theaters remain closed in the state and Warner Bros. is not screening for press in areas where theaters are closed.)

The film’s singular aura also stems from it being that Hollywood rarity — an original big-budget non-franchise title with a cast that is not obviously prime marquee material. With a reported budget of $200 million to $225 million, the fortunes of “Tenet” rest entirely on its air of tantalizing mystery, and on Nolan’s reputation as a commercial auteur of flamboyant audacity and invention.

Truth be told, “Tenet” is not the absolutely sui generis wonder you may be expecting. It’s basically espionage adventure, but with a science fiction backbone: Nolan ups the ante on “Mission: Impossible” by making the impossibility not just physical but quantum physical. And he goes about it expertly, bullishly and with giddily perverse intent to bewilder.

Critics are requested to avoid spoilers, but the plot is so intricate that it is hard to gauge what does and doesn’t constitute a spoiler. The premise, in simplest terms, is this: the Protagonist (“BlacKkKlansman” star Washington) is entrusted with a secret mission to prevent World War III. He is coolly briefed by a white-coated boffin (French actress Clémence Poésy, adopting a cut-glass English accent). The threat, she explains, involves “inversion” — technology from the future that makes objects move backward in time. Its powers are demonstrated by “inverted” bullets that leap back into the gun and an object that jumps into the Protagonist’s hand, as if he had dropped it, but in reverse. Cause comes before effect, she says, and adds, “Don’t try to understand it.”

Quite so. Such lines tip us off that we don’t have to try to fathom “Tenet” if we don’t want to: “Does your head hurt yet?” asks Robert Pattinson’s sidekick character during an exchange on time paradoxes. In fact, it’s possible simply to let go and enjoy the movie as a chain of over-the-top set pieces: Washington scales a skyscraper to reach a key contact; gets close to the villain’s wife (Elizabeth Debicki) in order to meet her husband, Russian arms dealer Sator (Branagh); crashes a plane into a building to get to an important object; pilots a sort of super-catamaran because … who knows, possibly just because it looks swanky and 007-ish.

But gradually (and you have to admire Nolan for stringing us along at his leisure), things get weirder. Matters come to a head in a delirious car chase, the Protagonist driving in one direction while Sator’s car speeds backward. About midway, Nolan spectacularly ramps up this backward-forward simultaneity: a battle sequences involves a “temporal pincer movement,” with two army detachments working together, but in different directions in time.

This logic lies in the title, “tenet” reading the same way in both directions. So expect to find the palindrome principle at work in the film’s structure, most ingeniously when Nolan stages action so that it seems to run backward and forward simultaneously. This is at once simpler and more complex than it sounds, and you can only imagine Nolan and his team (including stunt coordinator George Cottle and effects supervisors Andrew Jackson and Scott Fisher) alternately rubbing their hands and tearing out their hair over the logistical challenge.

So will “Tenet” pull us all back into cinemas? Energetically escapist, it certainly looks like the antidote to lockdown claustrophobia, not least because it offers a breathless travelogue, whisking us off in rapid succession to Mumbai, Oslo, Tallinn, London and Vietnam; cinematographer Hoyte van Hoytema gives Italy’s Amalfi coast an especially rapturous sheen that makes the globe-trotting lavishness of recent Bond look like a cheap package holiday. This is also a film that, in its sheer monumentalism, demands to be seen in a cinema, and on the biggest possible screen (it was shot on IMAX and 70-millimeter film).

But “Tenet” will later thrive in home viewing formats, giving viewers the chance to pause and go back over tricky passages. The exposition is copious and confusing, and often hard to catch, overlaid with industrial noise, or gunfire, or Ludwig Göransson’s thunderous score; or spoken through radio mikes, or muffled by face masks (another element that, fortuitously, makes this a COVID-era movie). It’s as if Nolan didn’t want us to catch what people were saying — one way to keep us going back for more.

This perplexity principle is a high-risk strategy that may turn many viewers off. That’s why the action and the imagery need to impress on their own account, and they generally do. But, much as the to-and-fro trickery messes with your mind, the imagery rarely has the same intensity of dreamlike strangeness that Nolan achieved in his “Inception”; instead, as in his “Dark Knight” films, he opts for a sometimes overpowering degree of industrial-level firepower, albeit edited with head-spinning briskness by Jennifer Lame.

That Nolan is attempting to outdo the dominant spy franchises is suggested by his play with espionage tropes — speedboats, glamorous locations, the crisp range of suits worn by Washington and Pattinson. There’s a nice allusion to the Bondian codes when the Protagonist lunches in London with an intelligence grandee, played in a trademark Nolan cameo by Michael Caine (in-joke: he’s reminded to call the character “Sir Michael”). “You British don’t have a monopoly on snobbery,” says Washington — to which Caine dryly replies, “Not a monopoly — more a controlling interest.”

The acting is what gives “Tenet” its most grown-up appeal — much of it in a studiedly detached, almost affectless style, especially from Debicki as Sator’s abused English wife, Kat. Debicki coasts through the havoc with a world-weary cucumber chill, her elastically elongated physique accentuated by Jeffrey Kurland’s costumes, notably a super-streamlined take on classic ’40s tailoring. And Pattinson is boyishly debonair as the Protagonist’s raffishly rumpled associate. The exception to the muted style is Branagh, sporting the ruthless haircut of a medieval warlord or a football club owner, occasionally bursting out of the tense monotone of his snarled threats to erupt in ripe Magnitogorsk-accented fury.

As for Washington, his performance is appropriately low-key for a character who is a functional cipher, yet he registers compellingly as the film’s center of gravity. He can pull off the physical intensity as well as the more urbane spyplay; but there’s also a candor and clarity to his gaze that make his hero convincingly noble — which suggest that he’s taking in all the info just as dazed as we are.

“Tenet” has ambition, ingenuity and imagination aplenty. Yet it lacks a certain living spark: Despite the occasional sharp line, Nolan never quite feels comfortable with humor, and his directing style is hardly what you’d call insouciant. “Tenet” is entertaining, but it isn’t exactly fun; Nolan may be a cinematic wizard, but here he’s working in the grandiose watch-this-building-disappear David Copperfield mode rather than showing the sly legerdemain that tends to make for grace in screen magic. “Tenet” also, for these times, feels somewhat archaically male, with Debicki’s subplot essentially a traditional damsel-in-distress story.

As for the complexity, “Tenet” will no doubt trigger as much speculative debate and feverish online diagram-posting as “The Matrix.” Most of us will have to take it on trust that, coming from the maker of 2000’s fiendish reverse-narrated “Memento,” “Tenet” really is as paradoxically complex as it would have us believe, but who knows? Nolan’s latest may well be full of sound and fury, signifying nothing, or it may signify something imponderably resonant, and signify it forward, backward and inside out. Does your head hurt yet?

Fri Aug 21 , 2020
Syracuse University has suspended 23 students following a large on-campus gathering, the latest example of college crackdowns on the kind of socializing that can spread the coronavirus and sink plans for in-person learning this semester. Syracuse officials announced the disciplinary action late Thursday and said they were reviewing security camera […] 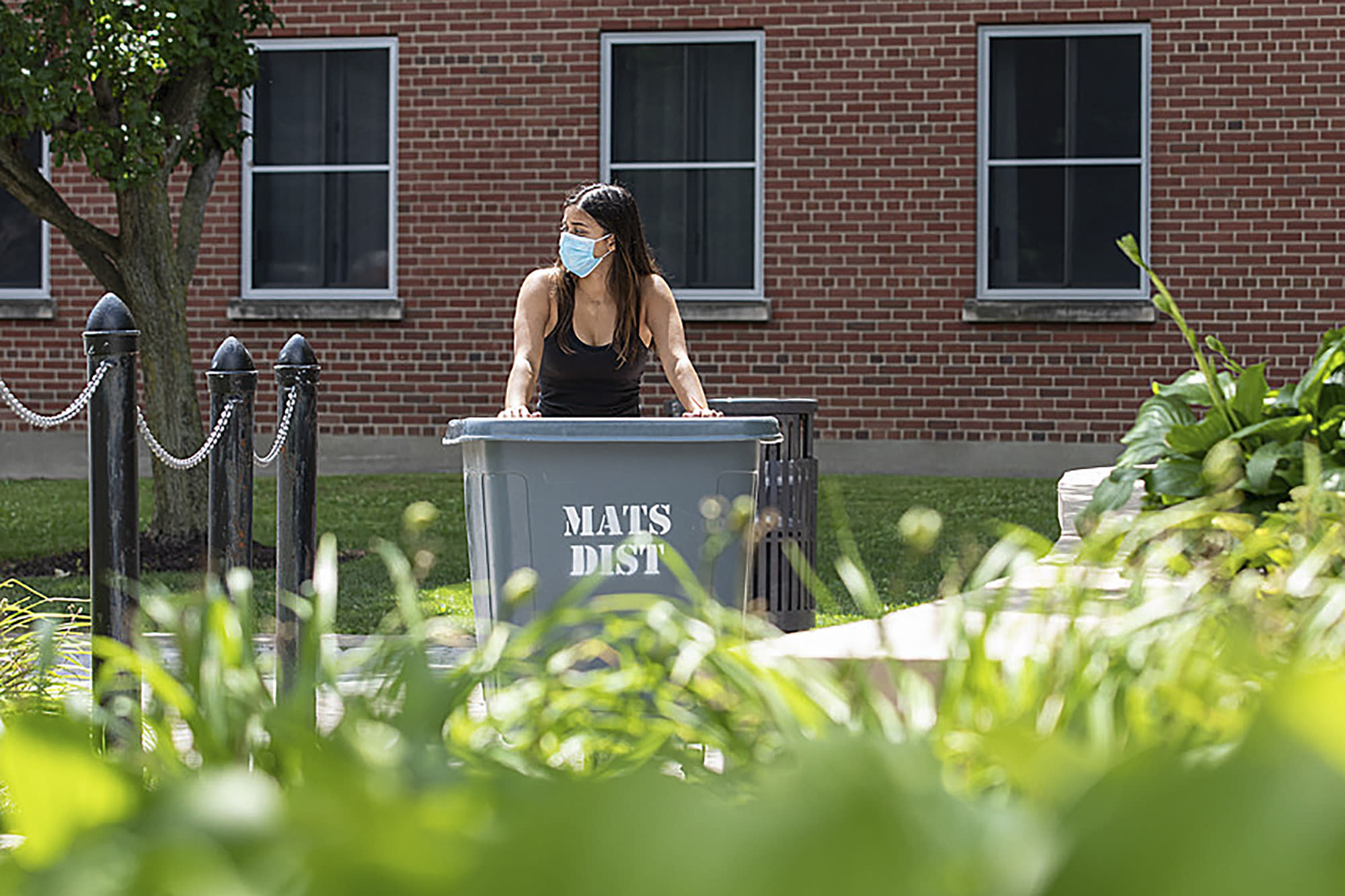