Biden announced he chose Harris, a 55-year-old freshman senator from California and the state’s former Attorney General, in a text message to supporters shortly after 4pm on Tuesday.

In a Facebook post, Biden extolled Harris as “smart, tough, and ready to lead” and applauded her work in the Senate to “hold the Trump administration accountable for its corruption, stand up to a Justice Department that’s run amok, and be a powerful voice against their extreme nominations.”

“She’s been a leader on criminal justice and marriage equality. And she has focused like a laser on the racial disparities as a result of the coronavirus,” Biden wrote. “Her record of accomplishment — fighting tooth and nail for what’s right — is why I’m choosing her.”

Harris was chosen after a lengthy deliberation process among the members of Biden’s small vetting committee. While the details of the search were primarily kept close to the higher ranks of the campaign, tidbits about the selection process occasionally came into public view, at times even from the loquacious candidate himself.

Biden declared in mid-March during the last Democratic debate that he would narrow down his list of possible contenders to only include women, on stage saying that “there are a number of women qualified to be president tomorrow.” While Biden more than occasionally veers off script to share his candid thoughts, the pronouncement was not spur of the moment. After the debate wrapped up, senior campaign officials convened a call with political reporters to pitch the significance of the moment on stage.

Harris had been dropping what appeared to be subtle clues in the days leading up to the announcement, posting a picture of with Biden on her widely followed Instagram account, sending a fundraising email on his behalf, and stating the importance of the country competently battling three simultaneous crises at once—economic, health, and “systemic racism”—a sentiment that Biden uses on the virtual stump. Harris is the first Asian-American vice presidential nominee in history.

Before the announcement on Tuesday, rumors had already started swirling in political circles. Reporters tracked private planes online and monitored the movements of potential picks.One Democratic source close to the vice president’s inner circle said that preparations had been in the works for several days to arrange for a private plane owned by a wealthy donor in Chicago to fly to California. The source said the plan had since changed, and Harris would remain in Washington. When contacted, the donor denied having any knowledge of the plan.

Biden’s decision to choose Harris delighted many activists of color who had mounted a vocal, public-facing campaign through the media on the impact nominating a Black woman could have towards progress against President Donald Trump. A letter circulated on Monday signed by “more than 100 Black male leaders” starkly declared, “[f]ailing to select a Black woman in 2020 means you will lose the election.”

In April, The Daily Beast reported that discussions had even reached the highest levels of Biden’s campaign, where at least two of his top advisers had expressed preferences for a Black female running mate early as the spring.

One of the most well-regarded figures in Democratic politics, Majority Whip James Clyburn—who was credited with helping Biden score his campaign-reviving win in his home state of South Carolina—said in an interview with NPR back in March that “I really believe that we’ve reached a point in this country where African American women need to be rewarded for the loyalty that they’ve given to this party,” adding that “I would really be pushing for an African American female to go on the ticket.”

Kamala Harris Was in Biden Circle of Trust. Then Came Debate Night.

While Clyburn and other prominent Black politicians never formally expressed a personal candidate preference, Harris had displayed reassuring qualities of preparedness early on. Although she wasn’t from a battleground state like Michigan Gov. Gretchen Whitmer, Florida Rep. Val Demings or Mayor Keisha Lance-Bottoms and former House Minority Leader Stacey Abrams, both from Atalanta, Georgia, Harris offered a stacked legislative and legal resume that, in Biden’s eyes, would translate well to the White House.

In Washington, Harris sustained the public’s acute attention as a high-profile member on the Judiciary Committee, which Biden previously chaired. Harris, a trained prosecutor, made former Attorney General Jeff Sessions “nervous,” in his own words, during a Senate hearing on election interference. She also made news for her steady interrogation of Supreme Court Justice Brett Kavanaugh during his confirmation hearing.

Outside of the Beltway, Harris and Biden shared a personal familial connection. Harris had a deep bond with Biden’s son Beau, who passed away from brain cancer five years ago. In 2016, she said “it is through my friendship with Beau that I truly came to know Joe Biden, not just as a leader but as a person” during a speech at the California Democratic Convention.

Biden made note of this connection in his statement announcing Harris on Facebook.

“He had enormous respect for her and her work. I thought a lot about that as I made this decision,” Biden wrote. “There is no one’s opinion I valued more than Beau’s and I’m proud to have Kamala standing with me on this campaign.”

Harris’ selection also shows a willingness of the Biden campaign to move past what some allies considered a proverbial punch to the presumptive nominee during the early days of the primary.

At one point during a debate in Miami, Harris seemed to stun Biden when she accused him in no uncertain terms of being on the wrong side of history on desegregation. “As the only black person on this stage, I would like to speak on the issue of race,” Harris said at the time, as her white rivals debated the role race plays in daily life.

“So on the issue of race, I couldn’t agree more that this is an issue that is still not being talked about truthfully and honestly,” she said. Harris took issue with Biden’s past positions in opposition to bussing while recalling a past memory about being bussed as a child. “There was a little girl in California who was part of the second class to integrate her public schools and she was bussed to school every day,” Harris said before concluding “that little girl was me.” Harris told Biden “I do not believe you are a racist,” but the debate strategy left a mark among some close to the former VP.

Biden and Harris each set their sights mostly on South Carolina during the primary, with hope of gaining traction in the later contests that followed on Super Tuesday, including Harris’ native California. The two also competed to earn the most support from the Congressional Black Caucus, the powerful body in Washington that has tremendous influence among elected officials.

But as the primary process showed Biden’s enduring strength as a national frontrunner, it exposed Harris’ deficiencies in other aspects. She struggled for money (after regularly making the rounds at fundraisers) and dipped in polls ahead of the Iowa caucus. She also endured months of right-wing attacks, shared at times among progressives in her own party, on her record as California’s top prosecutor. In early December, Harris abruptly ended her bid before the first votes were cast.

While the Biden campaign officially moved beyond the temporary sting of Harris’ tough political critique on stage, others in his network attempted to knock her in the days leading up to the announcement, offering at times anonymous critiques that had gender implications about female leaders. CNBC reported that some Biden donors were starting a “shadow campaign” to stop her traction. Meanwhile, two longtime Biden confidants, former Sen. Chris Dodd (D-CT) and former Pennsylvania Gov. Ed Rendell, went on the record to criticize Harris. In a report by Politico, Dodd said “she had no remorse” about her early debate tactic against Biden, a move that led to further discord among Harris’ allies, the outlet also reported. In a separate report by CNN, Rendell, in an apparent effort to boost Rep. Karen Bass (D-CA), told the outlet that “Kamala can rub some people the wrong way. Karen Bass is not likely to do that.”

The nature of Harris’ exit, after months of early anticipation and ultimately defeat in her first bid at the nomination, makes Biden’s choice even more significant. And it comes as Trump continues to fall consistently in areas where he was once poised for success. With that, Harris has kept up her criticism of the president.

In late July, after Trump floated an unconstitutional thought about delaying the election, Harris turned to Twitter herself.  “Donald Trump is terrified. He knows he’s going to lose to @JoeBiden. It will require every single one of us to make that happen,” Harris tweeted, pinning it to her page just days before Biden officially announced her as his running mate. “We will see you at the ballot box on November 3rd, @realDonaldTrump.”

Immediately after Biden announced his selection, only a small group of people and a few local news affiliate trucks were gathered outside of Hotel Du Pont, the posh location here in Wilmington where Biden gave a speech in March addressing coronavirus.

Inside, the chandelier-clad lobby was almost completely empty, with several rooms on the same level locked. Jazz music played softly in the background, which is customary for the venue’s day-to-day operations, an employee told The Daily Beast.

Plush, jewel-toned furniture went unoccupied, as did a large wood desk that comfortably fits six. The main event, Biden’s campaign announced, would be on Wednesday.

Wed Aug 12 , 2020
Enver Gjokaj, left, Chloe Bennet and Ming-Na Wen in the series finale of “Marvel’s Agents of S.H.I.E.L.D. ” on ABC. (Mitch Haaseth / ABC) During the coronavirus crisis, the Los Angeles Times is making some temporary changes to our print sections. The prime-time TV grid is on hiatus in print […] 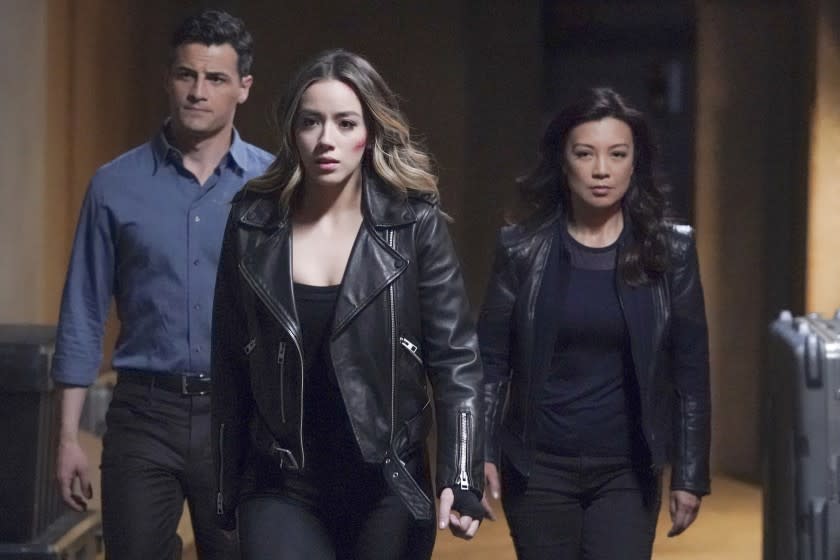