Professor Andrew Pollard from the Oxford vaccine group told BBC Radio 4 that first of all they have to “demonstrate a vaccine works and is safe, and then to go through the processes of regulators looking at that very carefully to make sure everything’s been done correctly.

“But it is also just possible that if the cases accrue rapidly in the clinical trials that we could have that data to put before regulators this year, and then there would be a process that they go through in order to make a full assessment of the data”

Elsewhere, patients with blood cancer have a much higher chance of developing severe illness if they contract coronavirus than people with other forms of cancer, a study has found.

The paper by researchers at the Universities of Oxford and Birmingham concluded that blood cancer patients admitted to hospital had 57 per cent higher odds of severe disease, and that cancer patients over the age of 80 had the highest frequency of fatality.

Students will begin receiving their Btec results from today after exam board Pearson delayed their publication.

Grading for the vocational qualifications was delayed to give the board more time to recalculate the grades after A-level and GCSE results were based on teacher estimates.

Last week, Pearson said the regrading was needed to “address concerns about unfairness in relation to A-levels and GCSEs and ensure no Btec student is disadvantaged.”

Cindy Rampersaud, senior vice-president for Btec and Apprenticeships at the company, said all eligible results will be available by Friday.

Around 200,000 level one and two entries were due to receive grades last Thursday, while 250,000 level three grades have already been awarded but were part of the reassessment.

Google saw a 500% increase in people searching for local beer delivery during lockdown, its UK managing director has said.

Ronan Harris told ITV’s Good Morning Britain there was also a 1,300% increase in searches for local produce, including “local farm box” and “local meat delivery” over the past few months.

He said: “As we were forced into lockdown and limiting our movements, people were returning to their local businesses and wanting to find out were they open, were they delivering, were they doing click and collect and what was available.”

AstraZeneca has started a Phase 1 clinical trial of its drug AZD7442, a combination of two monoclonal antibodies, for the prevention and treatment of Covid-19.

The trial will evaluate the safety, tolerability and pharmacokinetics of the drug and will include up to 48 healthy participants in the UK aged 18 to 55 years.

Mene Pangalos, Executive Vice President, BioPharmaceuticals R&D, said: “This trial is an important milestone in the development of our monoclonal antibody combination to prevent or treat COVID-19. This combination of antibodies, coupled to our proprietary half-life extension technology, has the potential to improve both the effectiveness and durability of use in addition to reducing the likelihood of viral resistance.”

Should AZD7442 prove to be tolerated and have a favourable safety profile in the trial, AstraZeneca will progress it into larger late-stage Phase II and Phase III trials to evaluate its efficacy as a potential preventative and treatment approach against COVID-19.

Hong Kong on Tuesday announced it would ease some coronavirus measures from Aug. 28, as the government cautioned against complacency despite a steady fall in the number of new cases.

Hong Kong had seen a resurgence of locally transmitted cases since the start of July but the daily number has fallen from triple digits in recent weeks to low double digits. Monday’s daily infection count of nine new cases was the lowest in nearly two months.

The United Nations chief says the tourist industry has been devastated by the pandemic, with $320 billion (£244 billion) lost in exports in the first five months of the year and over 120 million jobs at risk.

Secretary-General Antonio Guterres said in a policy briefing and video address released on Tuesday that tourism is the third-largest export sector, behind fuels and chemicals, and accounted for 7 per cent of trade last year.

“It employs one in every 10 people on Earth and provides livelihoods to hundreds of millions more,” he said. “It boosts economies. . It allows people to experience some of the world’s cultural and natural riches and brings people closer to each other, highlighting our common humanity.”

But the UN chief said that in the first five months of 2020, because of the pandemic, international tourist arrivals decreased by more than half.

Mr Guterres said the tourism impact of Covid-19 has been a “major shock” for richer developed nations “but for developing countries, it is an emergency, particularly for many small island developing states and African countries.”

Tourism for some of those countries represents over 20 per cent of their GDP, he said.

This time last year Yoon Seok-min, his wife Kim Hyo-jung and their two children were holidaying in the Philippines, Vietnam and Guam. A trip to Hawaii was on the cards for this summer.

Instead, as the pandemic has stymied overseas travel, the family, like other South Koreans, has turned to a new and extreme form of staycation: transforming their home into their favourite vacation spots.

Now, Kim and Yoon’s five-bedroom apartment in Yongin city, south of Seoul, is decked out with potted palms and rattan furniture, bringing the breezy feel of the tropics indoors.

There are even different locales – the couple’s bedroom is meant to resemble a Bali resort, while the living room has been designed on the lines of Hawaii.

“Since we can’t travel abroad for some time because of the coronavirus, we tried to bring those vacation spots to our home,” Kim said.

Speaking at an event called “Brazil Beating COVID”, Mr Bolsonaro accused journalists of “malevolence” and “debauchery,” and added that they were “fat-asses” at high risk from the new coronavirus.

The far-right leader, who caught the virus himself in July, said he had recovered thanks to his past as an “athlete” in the army, where he served as captain.

“But when one of you fat-asses catches it, the chances of survival are far less. You only know how to use your pens malevolently,” he told journalists covering the event.

Known as the “Tropical Trump”, Mr Bolsonaro has had a tense relationship with the press since taking office in January 2019.

South Korea on Tuesday ordered all schools and kindergartens in the greater Seoul region – home to half the country’s 52 million population – to switch to online classes as they battle multiple coronavirus clusters.

The country’s “trace, test and treat” approach to curbing the virus has been held up as a global model, but it is now trying to contain several outbreaks, mostly linked to Protestant churches.

The numbers are low in global terms but represent the South’s 12th consecutive day of triple-digit increases after several weeks with numbers generally in the 30s and 40s.

Argentina confirmed a record 8,713 new cases on Monday and 381 resulting deaths in just 24 hours, as the Latin American nation battles a surge of contagions.

The country’s health ministry said that just weeks into a stricter quarantine in the capital Buenos Aires and its suburbs, cases were now springing up in other regions of the country.

The announcement comes after thousands of Argentines participated in a march calling for the restrictions to be lifted and stalled economic activity restarted.

Colombia will enter a period of “selective” quarantine when its five months of lockdown ends at the close of August, President Ivan Duque said on Monday, and will be part of Johnson & Johnson vaccine trials.

Restrictions on events and large crowds will continue during September while the government evaluates the spread of the virus, Mr Duque said, as more economic reactivation with safety protocols moves ahead.

“On Sept. 1 a new phase begins where we change the concept of preventative obligatory isolation with a large number of exceptions to a concept of selective isolation, of distancing, of individual responsibility,” Mr Duque said during his nightly television broadcast.

“Colombia today has signed a deal with (Johnson & Johnson) to carry out tests for phase three in the investigation of their vaccine.”

The trial will include 60,000 healthy volunteers worldwide between the ages of 18 and 60 who will receive a single dose of the vaccine, the health ministry said in a statement.

China reported 14 new cases for Aug. 24, all of which were imported infections involving travellers from overseas, the country’s health authority said on Tuesday.

This compared with 16 new cases reported a day earlier, all imported as well, and marked the ninth consecutive day of no locally transmitted cases.

The total number of confirmed cases now stands at 84,981, while the death toll remains unchanged at 4,634.

Head teachers have signalled they will defy orders to fine parents who fail to send their children back to school next month, claiming such punishments would be “counterproductive”.

Downing Street insisted on Monday that education is “compulsory” and that parents should be aware they will be fined as a “last resort” if they keep their children at home without permission.

Boris Johnson acknowledged that parents “are genuinely still a bit worried” about their children contracting coronavirus, but stressed that the danger was tiny.

Warning over US rushing through vaccine approval

The top US infectious diseases expert is warning that distributing a Covid-19 vaccine under special emergency use guidelines before it has been proved safe and effective in large trials is a bad idea that could have a chilling effect on the testing of other vaccines.

Scientists and health experts have expressed concern that President Donald Trump will apply pressure on the US Food and Drug Administration to deliver a vaccine before November to boost his chances of re-election.

Anthony Fauci, director of the National Institute of Allergy and Infectious Diseases, declined to comment on the president, but said there are risks in rushing out a vaccine despite the urgent need.

“The one thing that you would not want to see with a vaccine is getting an EUA (emergency use authorisation) before you have a signal of efficacy,” Dr Fauci told Reuters in a phone interview.

“One of the potential dangers if you prematurely let a vaccine out is that it would make it difficult, if not impossible, for the other vaccines to enroll people in their trial,” he said.

Read more: Trump gives emergency authorisation for use of plasma to treat coronavirus

These Casino Staffers Are Working in Fear

Tue Aug 25 , 2020
Photo Illustration by Elizabeth Brockway/The Daily Beast/Getty Lindsey,* a pit boss at the Cosmopolitan hotel on the infamous Las Vegas Strip, gets nauseous every night she hits the casino floor to begin her shift. Some maskless patrons wander around the casino nightly—as if the threat of coronavirus doesn’t exist—while others […] 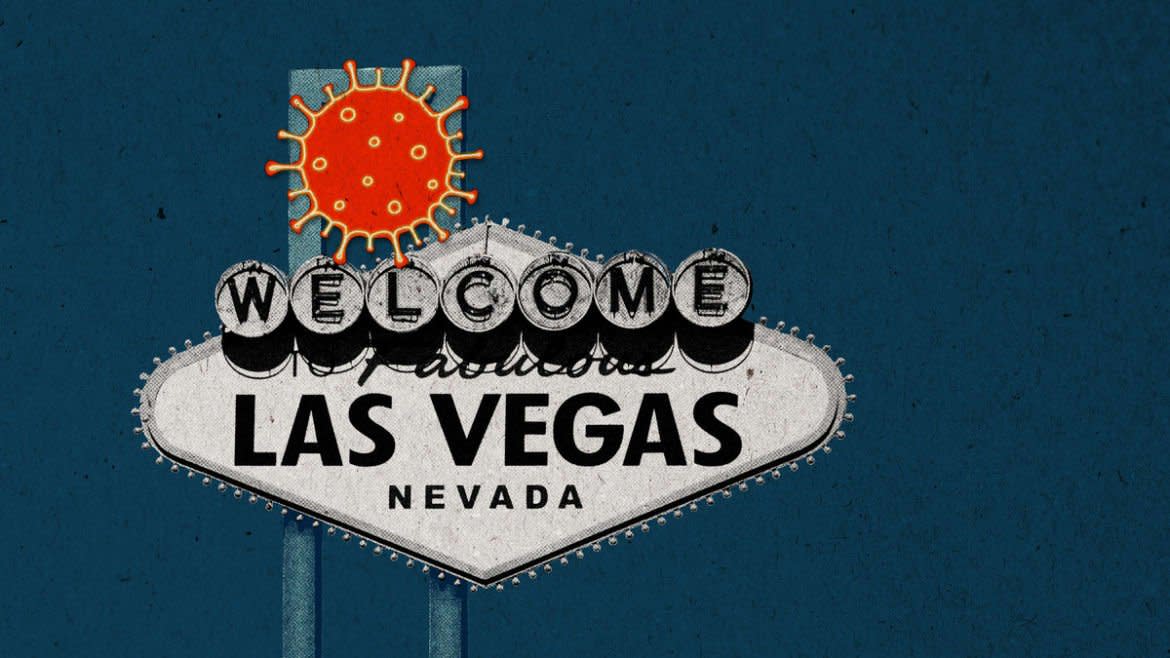