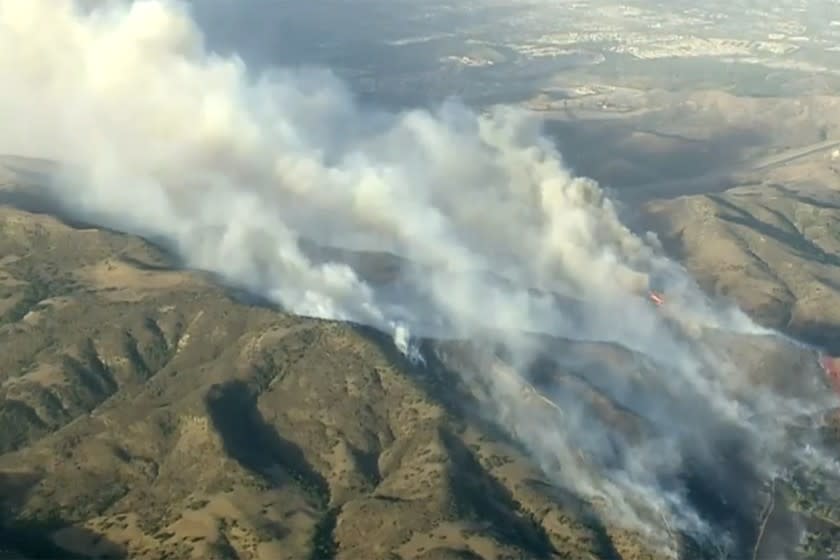 Orange County Monday was under siege from two wind-driven brush fires that forced 90,000 people from their homes, critically injuring two firefighters and leaving many others on edge.

The Silverado fire in Irvine broke out shortly after 6:45 a.m. near Santiago Canyon and Silverado Canyon roads. The fire, which was burning in a hilly area above homes, had grown to 7,200 acres by 4:30 p.m., officials said. A second fire had burned one home and threatened hundreds of others in Yorba Linda north of the 91 Freeway.

The injured firefighters, 26 and 31, were hurt battling the Silverado fire. Both were intubated after suffering second- and third-degree burns over half their bodies, Orange County Fire Authority Chief Brian Fennessy said. Additional details weren’t immediately available.

“They’re gravely injured,” he said. “We’re doing all we can for them.”

A mandatory evacuation order was issued for about 70,000 residents in Irvine, including all homes north of Irvine Boulevard between Bake Parkway and Jamboree Road, officials said. Homes from Irvine Boulevard to Trabuco Road and from Jeffrey Road east to Portola High School were also evacuated. So far, no structures have been damaged or destroyed.

In the Chino Hills area of Corona, west of the Santa Ana River, the Blue Ridge fire burned 3,000 acres and damaged at least one home by Monday evening . The extent of the damage was being investigated.

Corona Fire Department program specialist Denise Aguilar said the fire was burning near the Green River Golf Club, but it was heading west into Chino Hills and toward Yorba Linda, where officials reported the fire approaching from northeast of Bryant Ranch Park, on the east side of the city, about 2 p.m.

About 20,000 residents have been evacuated from nearby areas including the Hidden Hills community of Yorba Linda, north of the 91 freeway, east of Gypsum Canyon and south of Carbon Canyon Road.

In Irvine, many parks were closed because of the fires and high winds.

UC Irvine said it was suspending campus operations for the day because smoke and ash were making the air hazardous.

The winds were knocking over half-full trash cans and pushing them around the streets of Orchard Hills, a neighborhood in Irvine sitting in the path of fire.

Almost everyone had evacuated the neighborhood of two-story stucco homes by late morning, with the exception of one or two families who were still gathering their belongings.

Not far from Bella Garden Park, Raymond Siu, 44, stuffed his Lexus SUV with luggage and other personal items. Breathing hard, he said he learned about the fire from police alerts on his phone and immediately began preparing to evacuate.

“I’m feeling rushed,” he said, running to his white Tesla before driving off.

His family, seated in the white Lexus SUV, followed behind him.

Located between the Santa Ana River and Cleveland National Forest is the Green River Village, a mobile home park that found itself in the path of the Blue Ridge fire.

Residents wandered out of their homes glancing up at the black smoke and hillsides on fire.

Rodrigo Suarez, 41, who watched with his daughter, said it was just three years ago when another fire burned the hillsides across the 91 Freeway.

The mobile home park wasn’t evacuated then and he didn’t think they would need to evacuate now, Suarez said. The fire, he said, would need to jump the river and the wind was pushing it toward Yorba Linda.

“I feel nothing is going to happen,” he said.

But if things changed he had his truck ready and packed with important documents and cash. He would just load up his dogs and leave the area with his wife and daughter, he said.

There was no word on how the fire started. It ignited as parts of Southern California were experiencing fierce, dry Santa Ana winds, with forecasters warning that any fire that was to start could spread rapidly and be difficult to contain.

By 2 p.m., the National Weather Service was measuring wind gusts of 40 to 45 mph in the fire area. The winds were so fierce, that water-dropping aircraft aiding the firefight had to be grounded about 10:30 a.m.

“The challenge is that the aircraft will give us that extra edge,” Fennessy, the fire chief, said. “We still need to get the folks on the ground in there. It’s much tougher to do without that help from above.”

“And then combined with the really dry air, that’s why it’s creating these critical fire conditions and this fast-spreading wildfire,” said Dan Gregoria, a meteorologist with the National Weather Service in San Diego.

Relative humidity had plummeted to 5%, “which is bone-dry,” he said.

Gregoria said the area looked to be experiencing the worst of the winds Monday afternoon, although gusty conditions were expected to persist for another four or five hours before starting to subside later in the evening. The winds are expected to return early Tuesday before dying off in the afternoon.

Lana Salameh, 45, had just dropped off her two youngest children at school and returned home in Irvine’s Eastwood community when she realized the sky was a dull orange. Trees were falling from heavy winds and smoke was seeping into the house, but she had not been informed that school was canceled.

She hustled back to grab her 9-year-old daughter, Farah Abdelbari, whose tears were soaking her pink mask at Eastwood Elementary School. She then picked up her 11-year-old son, Omar.

“They were scared. It wasn’t easy,” Salameh said. “My kids were crying, but we had to leave.”

They grabbed their passports and some bananas before arriving at Quail Hill Community Center, which was reaching capacity.

Inside, about 30 people sat at socially distanced desks while small dogs were tied to table legs. News reports of the fire were pulled up on many of the evacuees’ laptops, while Salameh’s children worked on school assignments.

Esther Lee, 55, and dozens of others waited in the parking lot for a spot to open inside.

When Lee looked outside her bedroom Monday morning, the palm trees were swaying and a large plume of smoke had overtaken the nearby mountains.

Her home of 19 years along Portola Avenue in Irvine was being buffeted by smoke and wind, so she started packing.

About 9:30 a.m., she received a mandatory evacuation notice and quickly packed important documents into her two cars.

“We didn’t have much time, and I didn’t want to stay too long,” Lee said. “We’re just staying put for now because the winds can be so unpredictable.”

She and her husband, Jay, decided to stay put in a nearby park with their dog, Katara, until the couple’s family members in Lake Forest had an evacuation plan.

Fire officials weren’t aware of any homes that had burned but did receive a report of a fence ablaze in someone’s backyard, Gonzales said. He said the windy weather, dry vegetation and steep terrain had combined to pose a challenge to firefighters.

“It’s a little bit of everything to be honest, between the high unpredictable winds — we’ve had reports of gusts in excess of 70 mph — of course, we have the dry brush and, as always, terrain is something we have to deal with,” Gonzales said. “Now that we have aircraft grounded, it does make it a little more difficult but we have numerous resources on scene, and our goal is to control the fire and protect homes.”

Pat McGrath, 78, was making breakfast when a stranger pounded on her front door to inform her of the evacuation orders. The Ridge Valley woman has no family on the West Coast.

“I just panicked. I started crying,” McGrath said. “I’m cold, I’m hungry, I’m stressed and I don’t know what to do.”

Her voice was faint as she reclined into her seat at the Quail Hill Community Center with a beige cardigan draped over her.

“I was hoping there would be food or water, but I only got a bottle of water from a woman here earlier,” she said. “There’s a fountain down the hall, but I forgot my cane and my legs don’t work too well. I think your body doesn’t work as well when you’re stressed.”

It was about 8 a.m. when 24-year-old Sungho Hong was awakened by his parents. Hong said he got up and went to look outside at the billowing, brown smoke moving over the top of the hill behind their home.

But the fire was nowhere near the community, so his parents went off to work and Hong logged into his computer for his online courses at Cal Poly Pomona.

In the middle of his political science class, he had to leave the house. He drove his black Mercedes to the bottom of the hill. Sitting in his car watching the flames in the distance, he felt nervous. He also wondered about having to email his professor to let him know why he left class.

Back at the Vistas, firetrucks and firefighters were stationed along the hillside, ready to protect homes as the blaze made its way down, threatening dozens of homes in Knob Creek, Nest Pine and Leafy Pass.

Winds from the fire contributed to a large plume of smoke over the area, and the Orange County Health Care agency was urging residents to limit outdoor activity and keep doors and windows closed.

Stanley Liu’s family was turned away from University Community Center shelter, which was full.

The 45-year-old, his wife and son made their way to Rancho Senior Center, where they were asked prescreening health questions before entering. Only a third of the room was occupied.

The family had packed two suitcases of clothes and was prepared to rent out a hotel room for the night if the evacuation order continued.

“We were forced to stay home for months because of the coronavirus, and now we’re being forced to leave because of the fire,” Liu said. “We didn’t want to leave, but it wasn’t our decision. We’re worried about our safety and our home now.”

The National Weather Service issued a red flag warning through Tuesday afternoon amid the conditions, which also threatened tens of thousands of Southern California Edison customers with potential power shutoffs. The warning was in effect for all of Los Angeles and Ventura counties except for the Antelope Valley, as well as the entire Bay Area.

As of Monday evening, about 38,032 customers were without power, mostly in San Bernardino County. An additional 95,853 remained under consideration for a preemptive shutoff, according to Edison’s website.

Pacific Gas and Electric had said it would cut power to nearly 1 million people in Northern and Central California starting Sunday amid dangerous fire weather. By Monday morning, more than 300,000 customers were without power.

“We have very strong winds and very low humidities, and that’s causing ideal conditions for a very strong Santa Ana event with high fire danger,” said David Sweet, a meteorologist with the National Weather Service in Oxnard. “This is very typical for this time of year, but this one is very strong.”

Wind gusts of up to 80 mph led the weather service to upgrade the San Gabriel and San Fernando valleys to high wind warning conditions, noting that a “wave” of winds could crash down into the foothills along the 210 Freeway corridor Monday.

The winds were even stronger in higher elevation areas, with the weather service reporting a gust of 96 mph in the San Gabriel Mountains just south of Santa Clarita about 6 a.m. Monday.

The combination of winds and low humidity levels are expected to create “the most dangerous fire weather conditions we have seen since October 2019,” the National Weather Service said.

Although conditions across Southern California are cooler than they have been in months — the Antelope Valley will see sub-freezing temperatures Monday and Tuesday morning — Sweet said the low humidity is still cause for concern.

“You can be sure that the vegetation is bone-dry and tinder-dry, and so the fire threat is very high for very rapid spread of fire,” Sweet said. “Along with that, you’ve got very strong winds, which means that lit embers and ashes could be carried for miles.”