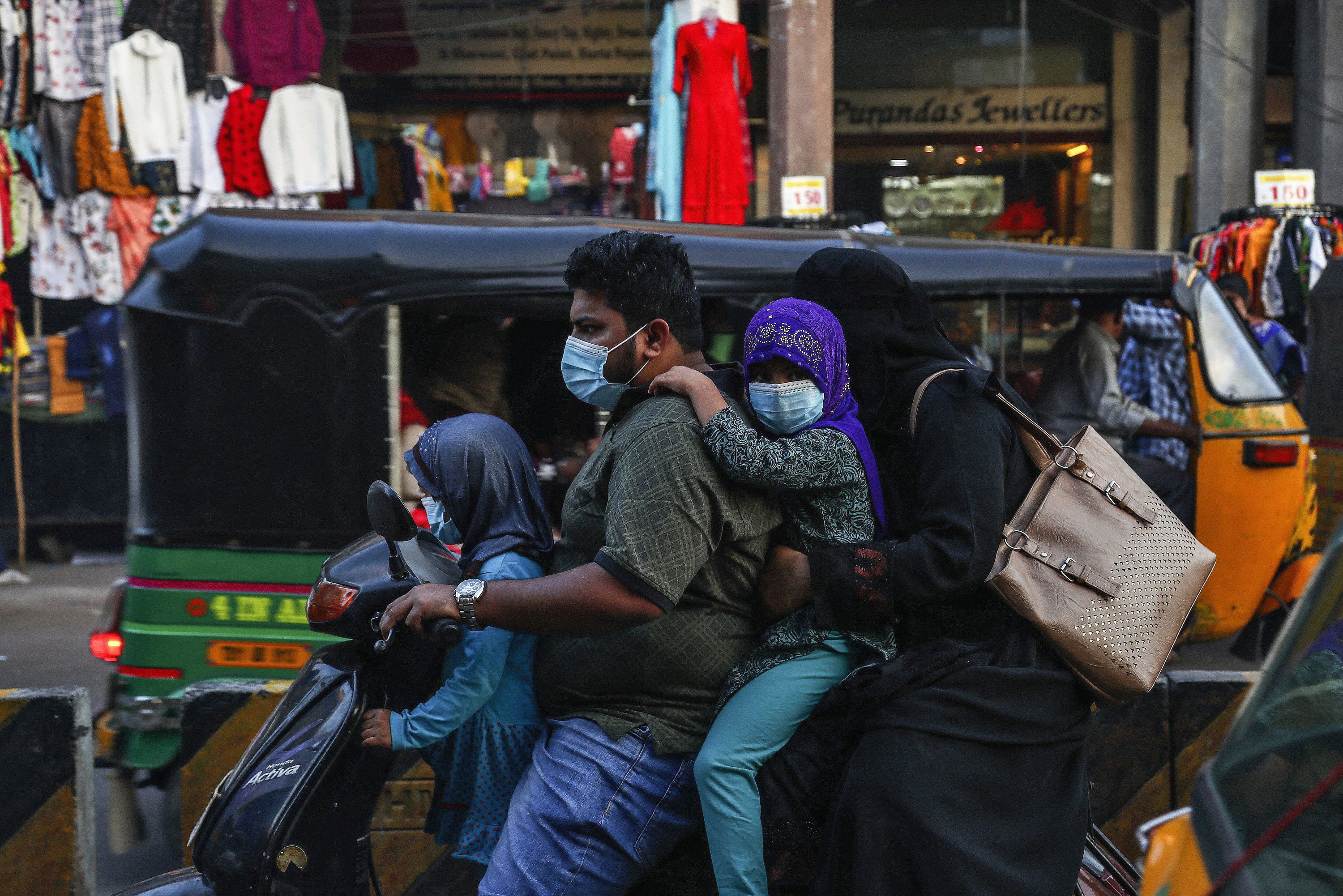 NEW DELHI — India is reporting 31,521 newly confirmed coronavirus infections in the past 24 hours, dropping to just over a third of the peak level seen in mid-September.

India’s single-day cases have remained below 50,000 for more than a month.

India’s health ministry says some coronavirus vaccines are likely to receive licenses in the next few weeks. It has outlined an initial plan to immunize 300 million people.

Three vaccine companies have applied for early approval in India: Serum Institute of India, which has been licensed to manufacture the AstraZeneca vaccine, Pfizer Inc., and Indian manufacturer Bharat Biotech.

About 50% of Americans will take the new coronavirus vaccine, according to The Associated Press-NORC Center for Public Affairs Research survey. About 25% of U.S. adults aren’t sure if they want to get vaccinated, taking a wait and see approach.

Canada health regulators approve Pfizer’s vaccine, days ahead of possible approval in the United States. Health Canada says 249,000 doses of the vaccine made by U.S. drugmaker Pfizer and Germany’s BioNTech will arrive this month and be administered within days.

AUSTIN, Texas — A Texas state official who has been critical of measures ordered by Gov. Greg Abbott in efforts to slow the coronavirus pandemic says he has tested positive for the virus.

Texas Agriculture Commissioner Sid Miller was among an estimated 200 people who rallied outside Abbott’s home in October to protest his pandemic orders, including a continued statewide mask mandate and lockdowns.

In a statement Wednesday, the 65-year-old Miller says he has been quarantining at his ranch.

In his words: “Not feeling my best, but I’ve survived rodeo injuries, broken bones, hip, double knee and shoulder surgery, west nile virus and cancer, and I’m going to beat this too.”

UNITED NATIONS — U.N. Secretary-General Antonio Guterres says “vaccine nationalism” is moving “at full speed.” He says that is leaving people in developing nations around the world watching preparations for the rollout of inoculations against the coronavirus in some rich countries and wondering if and when they will be vaccinated.

The U.N. chief has repeatedly called for vaccines to be treated as “a global public good” available to everyone on the planet, and he appealed Wednesday for $4.2 billion in the next two months for a World Health Organization program to buy and deliver virus vaccines for the world’s poorest people.

The United Kingdom and Russia are already vaccinating people. In the United States, the Pfizer vaccine could get a green light for emergency use in the coming days. The vaccine was approved by Canada on Wednesday.

Guterres says that “what we’re seeing today is an enormous effort by several countries in order to ensure vaccines for their own populations.”

HONOLULU — Hawaii will furlough more than 10,000 state workers two days a month to balance the state’s budget as tax revenues decline due to the coronavirus pandemic.

Gov. David Ige said Wednesday the furloughs will take effect Jan. 1 and cut payroll spending 9.2%. The governor says he and members of his Cabinet will get the same percentage salary cut.

Nurses, firefighters, prison guards and others whose jobs involve around-the-clock operations won’t be required to furlough. Employees at airports and harbors whose pay is covered by federal funds will also not be furloughed. About 4,600 employees fall into this exempt category.

AUSTIN, Texas — For a second day this week, hospitalizations of people with the coronavirus in Texas topped 9,000.

Researchers at Johns Hopkins University say the death toll in Texas is at more than 23,000, the second highest in the country.

WASHINGTON — The founder of the Black Doctors COVID-19 Consortium says she has concerns about the availability of potential coronavirus vaccines.

Dr. Ala Stanford said Wednesday that “everyone who needs a test cannot get a test. So, I do have concerns about the vaccine availability.”

She says it is important that vaccines are received by people “going to work every day in contact with the public, bringing it home to their communities and transmitting it.” She recommends hospitals “be required to have a culturally competent education program in place” about potential vaccines.

The U.S. Food and Drug Administration will decide whether to approve a Pfizer vaccine within days. If approved, the first recipients are likely health care workers and nursing home residents.

Barbara Ferrer said Wednesday that this week the county recorded an average of 43 daily deaths — up from about 12 a day in mid-November.

Ferrer fought back tears as she called the deaths “an incalculable loss to their friends and their family and the community.”

Hospitals in Los Angeles are dealing with a surge in COVID-19 patients, with new admissions running near 500 a day. Officials anticipate that number will increase to 700 a day by next week.

JACKSON, Miss. — Mississippi Gov. Tate Reeves is defending his decision to hold Christmas parties at the Governor’s Mansion after repeatedly warning people to avoid social gatherings as coronavirus cases surge in the state.

Reeves said Wednesday that he has invited family, friends and state officials to the multiple parties, but he expects many will choose not to attend.

The governor has often told people not to host gatherings as the virus spreads. He issued a new executive order Wednesday that restricts social gatherings statewide to 10 people indoors and 50 outdoors when social distancing is not possible and has issued a mask mandate for all Mississippi schools and for 61 out of 82 counties with the highest number of new coronavirus cases.

SACRAMENTO, Calif. — The greater Sacramento region will be placed under California’s most restrictive coronavirus rules this week because capacity in hospital intensive care units has fallen below 15%.

The 13-county region encompassing the state capital has an ICU capacity of 14.3% and will face a regional stay-at-home order at 11:59 p.m. Thursday, according to the state Department of Public Health website.

Under the restrictions, restaurants must stop outdoor dining, personal care businesses such as barbers must close and the number of people allowed inside stores is reduced. Residents are asked to stay home except for essential activities.

The huge Southern California and San Joaquin Valley regions are already in the strictest category, and several counties in the San Francisco Bay Area chose to implement their own voluntary orders independent of the state. The state is divided in to five regions for purposes of determining restriction levels based on ICU capacity.

NEW YORK — A study out of Italy is seen as added evidence that COVID-19 virus may have been spreading in late fall of 2019, before an outbreak was first reported in Wuhan, China.

Researchers identified the new coronavirus infection in a specimen taken in early December from a 4-year-old boy who lived near Milan. The boy first developed a cough and other symptoms in November, months before COVID cases were identified in Italy.

In the study, the researchers went back and looked at back-of-the-throat swab specimens that had been collected from 39 patients between September and February. One from the boy tested positive for the new coronavirus.

The researchers noted that the Italian child developed cold and flu-like symptoms in November and then a measles-like rash in early December. But they don’t detail where the child had been or who had been around.

Scientists at the University of Milan led the study and the medical journal Emerging Infectious Diseases this week posted it online. The U.S. Centers for Disease Control and Prevention publishes the journal, but it is editorially independent of the agency.

ANKARA, Turkey — Turkey’s health minister says his country has no plans to make vaccination against the new coronavirus mandatory but will work to convince the public about the safety of the vaccines.

Speaking to reporters following a meeting of the country’s scientific advisory council on Wednesday, Fahrettin Koca also said people who contracted the virus in the past four to six months, children, and pregnant women would not be vaccinated.

Turkey has ordered 50 million doses of the vaccine developed by Chinese company Sinovac Biotech, with the first shipment due to arrive in the coming days. Turkey is also engaged in talks to obtain other vaccines and hopes that a Turkish vaccine will be ready for use in April.

Turkey is experiencing a surge in infections with confirmed cases of COVID-19 hovering above 30,000 per day. The country’s death toll since March has topped 15,000.

The government will assess the effectiveness of recently imposed weekend and evening curfews before deciding whether to impose stricter lockdowns, the minister said.

Koca said a total of 216 health workers have died since the start of the outbreak.

Holcomb said Indiana is “on fire” with coronavirus spread as the number of Indiana counties with the highest risk level of coronavirus spread more than doubled in the state health department’s weekly update. The tracking map labels 36 of the state’s 92 counties in the most dangerous red category, up from 16 a week ago. All other counties are in the next riskiest orange rating.

Total positive cases statewide stood at 16,125 and 3,282 had died from the disease in the state.

Holcomb, a Republican, said he was extending the statewide mask order and toughening restrictions on crowd sizes that he reinstated last month. The new rules will prevent local health departments from allowing exemptions for social gatherings of more than 25 people in counties with red ratings and more than 50 people in orange-rated counties.

CHEYENNE, Wyo. — A Wyoming Department of Health official who falsely described the coronavirus and development of vaccines against it as a communist plot has resigned.

A health department spokeswoman said Wednesday that Igor Shepherd submitted his resignation Tuesday and that department officials accepted it the same day. Shepherd made the remarks at an event in Colorado last month, and they undermined Wyoming’s public health efforts to contain the new coronavirus.

Shepherd couldn’t be reached for comment. A listed phone number for him did not work, and as of Wednesday he had not returned social media and work phone messages left last Friday.

PHOENIX — Arizona’s death toll from the coronavirus pandemic surpassed 7,000 on Wednesday and the state reported 108 deaths.

The Department of Health Services says on Twitter that “a large percentage” of the 108 deaths reported Wednesday were due to reviewing past death certificates and determining the deaths were from COVID-19. That periodic process results in a larger than normal daily report of deaths.

According to the state’s coronavirus dashboard, COVID-19-related hospitalizations on Tuesday reached 3,287, up 130 from Monday. It included 766 patients in intensive care unit beds.