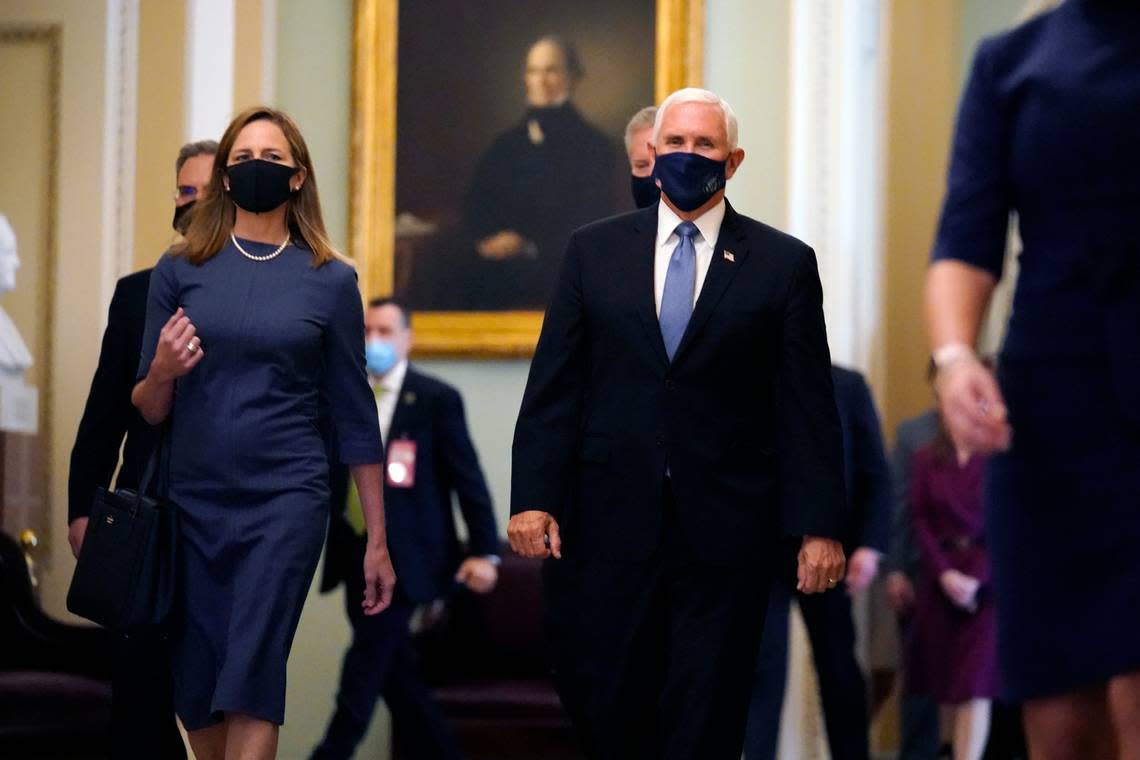 Fly conservative activists to Washington for a multiday workshop. Gather them in a hotel ballroom for training sessions. Send them to the U.S. Capitol to demonstrate at legislators’ offices. Feed them at a local restaurant.

It’s a model that Brandon is relying on once again for the confirmation process of Trump’s third nominee to the high court, Amy Coney Barrett, if logistical hurdles associated with gathering groups during the pandemic don’t get in the way.

Beginning this weekend, Brandon plans to bring mask-wearing activists back to the nation’s capital for a series of events tied to the election and Barrett’s nomination.

While he hopes that activists will be permitted inside the U.S. Senate and authorized to conduct mini-rallies with ideologically aligned lawmakers, the conservative organizer admits he does not know if those activities will be possible.

“The hard thing is, we’re making it up as we go along,” he said. “We knew under our old rules. We knew under Kavanaugh. We knew under the impeachment what we could do. But right now it’s confusing, but we’re going to do everything that we can.”

With hearings on Barrett’s nomination scheduled to begin in less than two weeks on Oct. 12, activist groups on both sides of the political divide are grappling with how to lobby lawmakers and engage voters, given coronavirus concerns and restrictions on indoor and outdoor gatherings.

The vacancy on the court created by the death of Ruth Bader Ginsburg has led to a fundraising frenzy and massive spending pledges by leading political and advocacy organizations.

The political fight has drawn in groups on the left such as Demand Justice, American Bridge 21st Century, Planned Parenthood Action Fund and Protect our Care. And groups on the right, including the Republican National Committee, the Judicial Crisis Network, Club for Growth Action and America First Policies.

Political organizations are vowing to spend a collective $40 million on advertising and activism oriented around the nomination.

That spending largely comes in addition to what the organizations had publicly committed to the presidential election, although some groups are redirecting resources or building on their planned efforts.

FreedomWorks is planning to spend a combined $1.5 million on its Supreme Court campaign, which includes a new round of digital ads that launched on Monday that target conservative voters with a message in support of filling the seat as soon as possible.

The advertisements are running in Michigan, Pennsylvania, Colorado and Montana currently and will soon expand to Florida and Arizona. They supplement the limited-government group’s text message and door-knocking programs and the training sessions that FreedomWorks plans to hold in October.

Brandon said the group, which advocates for lower taxes and government spending, is currently conducting a national poll and a survey of battleground states on the Supreme Court nomination that it will use to shape its outreach to independent and swing voters.

In the past, FreedomWorks has communicated its message through advertising on Facebook, Hulu and weather apps, he said.

“You’ve got to get creative to get out there,” Brandon said. “In a place like Arizona or Montana, almost all the television, radio, even the internet has all been bought up by this point already.”

The Supreme Court battle has given activist groups that were already heavily involved in outreach for the election, a voter friendly message to use for fundraising and campaigning.

The Susan B. Anthony List was already engaged in door-knocking in battleground states and the anti-abortion group now plans on making a seven-figure investment on expanding the program, new digital advertising and other activism events, officials with the group said.

Senior staff with Americans for Prosperity told McClatchy that the conservative advocacy group funded by Charles Koch had also launched a seven-figure campaign with the goal of exceeding the grassroots impact it had on Kavanaugh’s confirmation battle.

Casey Mattox, vice president of legal and judicial strategy at Americans for Prosperity, said that for Kavanaugh’s confirmation the group made over a million phone calls, ran digital and door-knocking campaigns and its supporters had 200,000 contacts with legislators.

Americans for Prosperity set up a website the day after Barrett’s nomination to help constituents send letters of support to their senators. More than 120,000 letters have been sent through the website so far, Mattox said.

“What we’ve done in the past is a good model,” Mattox said. “That’s really what we bring to the table — the ability to motivate grassroots and to give them a voice to weigh in on this process.”

Some groups had already sworn off door-to-door activities this election, because of the threat from the coronavirus, but they are encouraging their activists to make phone calls to senators and voters and are inviting them to online events.

Planned Parenthood’s political and advocacy arms made an initial six-figure investment and plan to spend additional money on advertisements, a spokeswoman said.

The organization is holding an online briefing for its activists on Thursday and sponsoring a weekend of action calling on senators not to take up the Supreme Court nomination until after the presidential inauguration. Working in partnership with the Women’s March and the We Demand More coalition, the liberal group will also be organizing marches on Oct. 17.

A previous briefing that featured Senate Minority Leader Chuck Schumer, D-N.Y., had 1,500 participants and has been viewed thousands of times since, the group said.

In a statement, Planned Parenthood Votes executive director Jenny Lawson said they would be mobilizing voters in every state around the threat to abortion rights from a more conservative court.

“This is not what voters want. Senators who stand with Trump now and allow him to fill this seat with an extreme nominee in the waning days of his term will be held accountable in November and they are going to be out of a job come January,” she said.

Planned Parenthood Action Fund, NARAL Pro-Choice America, Demand Justice and other liberal groups held a rally outside the Supreme Court the day after Trump announced Barrett as his nominee. The groups oppose the Senate confirming the nomination before the inauguration.

The political battle during the pandemic has led to an increase in activism at outdoor events.

Demand Justice, which has said it will spend $10 million opposing Barrett’s confirmation, in collaboration with March For Our Lives, painted a mural in Washington last weekend on the street that runs in front of Senate Majority Leader Mitch McConnell’s home.

The group also projected quotes in support of Roe v. Wade, the seminal Supreme Court abortion case, on Trump International Hotel in Washington, D.C., and handed out masks outside the Supreme Court while Ginsburg lay in repose that said “honor her wish,” in reference to what the justice told her granddaughter in the days before her death

“My most fervent wish is that I will not be replaced until a new president is installed,” NPR reported Ginsburg as having said.

NARAL is hosting virtual call parties and making use of a text message program to recruit voters to put pressure on senators to oppose Barrett’s nomination.

Some activists want to take part in live events like the protest, NARAL President Ilyse Hogue said, and the group is offering a wide variety of options for engagement.

“Everything that we offer in person we want to make sure that people don’t have to risk their health and their life to be heard,” she said. “People should have their calls taken by their Senate offices both in state and in D.C.”

It is likely to be very difficult for anyone other than the media, congressional staff or people they designate to attend the Barrett hearings on Capitol Hill.

Traditionally, people line up hours before a major hearing to get a seat, and if crowds are large, they are allowed to spend a limited amount of time inside so the seats can be rotated.

But since March, the Capitol, its visitors center and office buildings have been open only to members of Congress, staff, media and escorted official business visitors. Seating at hearings has usually been very limited and spaced for social distancing.

“You can’t get into the Senate buildings the way you could before,” Hogue acknowledged. “But that doesn’t prevent people who are choosing to take safe socially distant action from being outside and making their voices heard to the people they duly elected.”

“We made a limited initial investment on digital advertising, but for the balance of this fight, we plan to leverage our expertise which is opposition research,” Sacha Haworth, political and paid media director at the organization, said. “We are producing a comprehensive product now that will be distributed to allies and partners as early as next week.”

Barrett’s appointment to the court is all but certain if swing senators do not change their minds. Republicans can only afford to lose one more senator, in addition to the two who have said publicly that they will not vote to confirm a nominee before the election, and still win the confirmation. The vice president would serve as tiebreaker if that were to happen.

Ralph Reed, founder of the Faith and Freedom Coalition, said his organization is planning to send action alerts to more than a million members and activists in key states prior to the confirmation vote that is expected to take place days before the Nov. 3 election.

Faith and Freedom plans to make an estimated 500,000 phone calls to the same group of people, he said, and engage with Christian and conservative activists through social media, mailers and email.

“It will be designed to flood the capital to those Senate offices of either Republicans who need support or encouragement or Democrats who need to be persuaded,” he said.

The religious right group has full-time staff in 15 states and affiliates in 32 states, and Reed said it is planning to spend $1 million on its efforts to support the Supreme Court nomination.

Senate Judiciary Committee Chairman Lindsey Graham, R-S.C., has said he wants the committee to approve Barrett on Oct. 22. The White House is seeking a vote of the full Senate on the nomination by the end of that month.

Hogue said the tight schedule means that if a Republican senator gets cold feet, like former Arizona Sen. Jeff Flake did in 2018 during the Kavanaugh confirmation process after he was confronted by activists, then a vote could be delayed until after the election.

She said that NARAL would put pressure on vulnerable Republicans such as Graham, who is on the ballot this year in South Carolina, and Joni Ernst, a freshman senator from Iowa.

“They’re nervous, and I think it’s not impossible for one of them to see the light,” she said. “We are driving up the political price as best as possible.”

Michael Wilner and David Lightman contributed to this report.