As Californians continue to battle the coronavirus, they may run headlong into another deadly force.

The state again faces a potentially explosive fire season — but this year, it must balance extinguishing blazes with containing a pandemic.

California’s wildfires are growing more extreme, burning bigger and faster. Six of the 10 worst fires in California’s history have occurred in the past three years, and 2018’s fire season was the deadliest and most destructive on record.

“The hots are getting hotter; the dries are getting dryer; the wets are getting wetter,” Gov. Gavin Newsom said in Thursday’s coronavirus briefing, which he delivered at Cal Fire’s air operations hangar at McClellan Airport. “Our approach to dealing with wildfires has to change and adapt with a climate that is changing very, very dramatically.”

Experts say California is once again heading toward a severe fire season. Winter, with little rain or snow, was followed by a warm spring, and summer promises to be hot and dry. The state’s brush has turned to tinder, laying the foundation for fast-moving and destructive wildfires as fall approaches.

“This year, there’s the extra dimension of the pandemic,” said Daniel Swain, a climate scientist at UCLA.

The coronavirus has forced firefighters to re-evaluate training, alter daily life and change strategies for combating blazes. Physical distancing becomes an obstacle as large fires force tens of thousands of citizens to evacuate and pack into high school gyms, while thousands of firefighters work side-by-side in rustic fire camps to contain the blaze.

“Having hundreds or thousands of firefighters from across the state congregating, that has the biggest risk,” said Scott Witt, Deputy Chief, Fire Plan & Prevention for Cal Fire. “Those are the fires that we really want to avoid.”

A large fire may mean exposure to the virus. Cal Fire hopes to avoid such a blaze in the first place.

“If we can keep them small and put them out quickly, we also reduce the risk of COVID-19 transmission,” said Don Gordon, the Asst. Deputy Director of Cooperative Fire Protection, Training and Safety for Cal Fire.

As the pandemic first swept through California, many of Cal Fire’s operations were forced to move online. The agency’s annual seven-week training academy for all firefighters had to be completed virtually, and defensible space inspections — to determine if residents of vulnerable homes have cleared a 100-foot buffer around their structures — went remote.

Just over 166,000 defensible space inspections have been completed in the past year, said Christine McMorrow, a spokeswoman for Cal Fire.

Meanwhile, as the virus ravages California’s prisons, the state’s inmate firefighter labor supply — a force of about 2,200 — has become an uncertainty.

California has released 3,500 inmates during the pandemic, and will free approximately 3,500 more people starting this month. Cal Fire is down to 77 from 90 fire crews in the north state this year.

Firefighter inmates, who are paid $2 a day, plus $1 an hour when fighting an active fire, need to be trained. Cal Fire and the California Department of Corrections must race against the clock to prepare new inmates to fill the empty spots.

In July, The Sacramento Bee reported that state prison officials had placed 12 of California’s 43 inmate fire camps on lockdown after a massive outbreak of COVID-19 in a Northern California prison that serves as the training center for fire crews.

Just 30 of the state’s 77 inmate crews will be available to fight blazes in the north state as long as the lockdown lasts, prison officials previously told The Bee.

Meanwhile, Cal Fire will continue to expand its firefighting force in anticipation of peak fire season. The agency will bring on 858 seasonal firefighters and 6 additional crews at California conservation camps, until at least October, Newsom said.

“How are we going to work together to reduce or mitigate the risk of transmission of COVID, but recognizing, at the same time, we have a mission: Put this fire out,” Gordon said. “We cannot not fight this fire.”

COVID-19 guidelines for fire response vary between agencies and districts — a potential stumbling block for on-the-ground firefighters containing a blaze outside of their normal jurisdiction.

A high-wire coordination act is playing out between Cal Fire, the Office of Emergency Services, the U.S. Forest Service and other agencies across the state. Communication in advance of fire season is key: “So there isn’t confusion, or consternation, on the front line,” Gordon said.

Cal Fire determined its set of high-level guidelines for when a fire breaks out in its jurisdiction.

“We’re going to have temperature checks when we go into incident bases, or when strike team leaders have a group of engines, they’re going to self-monitor and make sure that their firefighters aren’t exhibiting symptoms of COVID-19,” Gordon said.

“But, as you can imagine,” Gordon continued, “there are a lot of complexities that come into this when we start looking at big fires.”

California officials must prepare for a worst-case scenario: a catastrophic blaze amid the pandemic.

When thousands of residents fled the Camp Fire in 2018, a norovirus swept through the crowded evacuation shelters, sickening more than 200 people.

With the coronavirus still raging through California, densely populated evacuation centers could again provide a stage for the rapid spread of disease.

One hundred thousand people may need to evacuate at once, fleeing to overcrowded community centers or gymnasiums, experts said.

“How do you maintain social distancing in that context?” Swain said.

Cal Fire is grappling with how to reduce viral transmission amid a dangerous blaze.

Officials hope to disperse evacuees to more sites, and to towns and cities farther from the disaster. They are evaluating campus dormitories, county fairgrounds, and hotels as potential shelters.

The state has been working with the hotel industry to arrange less concentrated shelters for evacuees, Mark Ghilarducci, director of the Office of Emergency Services said during Thursday’s briefing. The state is also prepared to secure vacation rentals, like Airbnb, to help spread evacuees out.

Life within those scattered shelters will be different, too. Californians who have fled wildfires will practice social distancing within shelters, wear masks and undergo mandatory temperature checks as part of OES’ plan to limit coronavirus spread, Newsom said. Rather than eating at buffets, for example, evacuees will receive individually boxed meals.

Other measures at evacuation shelters will include extra medical staff and isolation of evacuees who test positive for COVID-19, Ghilarducci said.

Faith Kearns, a researcher at the University of California Institute for Water Resources, worries that, as in many natural disasters, the burden of living in crowded shelters during the pandemic will fall disproportionately on lower income communities and communities of color.

“A lot of people who can afford it go to hotels, or go stay with family or friends,” Kearns said.

Yet those who have friends or family members nearby who can house them also must worry about spreading the virus to elderly relatives, Kearns said. “You’re supposed to be isolating, and then you have to go stay with your parents?”

In addition, the smoke from a large and protracted burn can hover over a community for days, clouding skies and choking streets. This could compound the risk of the coronavirus.

“Air pollution and smoke amplify the symptoms and the spread of these kinds of diseases,” Swain said.

The risk to those battling blazes

A large fire doesn’t just increase residents’ vulnerability to the pandemic — thousands of firefighters also pour in from across the state to put it out. During the pandemic, such a mission could be doubly dangerous.

A large fire could bring as many as 5,000 responders to a base, and “they’re all being congregated together, “ Gordon said.

Thousands of firefighters might live for days or weeks at a time in a camp. COVID-19 could spread rapidly.

Cal Fire is preparing to adjust its fire camp strategy. Instead of gathering everyone in a fire camp together each morning as usual, fire agencies may broadcast morning briefings over video call.

Rather than one or two sites to house all the thousands of firefighters, the agency hopes to disperse them across many locations. Planners are working to identify and designate multiple new sites in each county – for example, fairgrounds, schools and campgrounds.

“In the past, where we might have only needed to use one of those facilities… now we might pull two or three of those into use, to be able to spread people out and keep the threat low,” said Scott Witt, Fire Plan Deputy Chief at Cal Fire.

The agency could also lean on aerial firefighting resources — Cal Fire operates the largest fleet of firefighting aircraft in the world.

Those include its new fleet of Fire Hawks, a helicopter that can quickly deploy firefighters and 1,000 gallons of water, an improvement over the slower Vietnam War-era Super Hueys. The retrofitted Black Hawk military choppers, which are stationed at McClellan Airport but can be deployed to any of Cal Fire’s 22 other air bases, are equipped to allow pilots to fly missions at night and are faster at responding to incidents, officials said.

“Aircraft is a really important tool in our kit,” McMorrow said. “We will be absolutely using our aviation fleet for aggressive firefighting this summer. Our goal is to keep 95 percent of fires that break out to under 10 acres.”

Swain, the climate scientist, hopes that California avoids the convergence of the pandemic and a catastrophic wildfire through an abundance of caution and a healthy dose of luck.

“But it only takes one spark in the wrong place, at the wrong time,” he said.

ICE says students taking 'hybrid' classes may be able to stay in the US, but it won't tell colleges what that means

Thu Jul 9 , 2020
Many universities including NYU, which is home to over 17,000 international students, plan to operate under a hybrid model in the fall. Facebook/NYU New guidelines from ICE prevent international students on certain visas from attending schools that are fully online, but may allow them to remain if they’re taking a […] 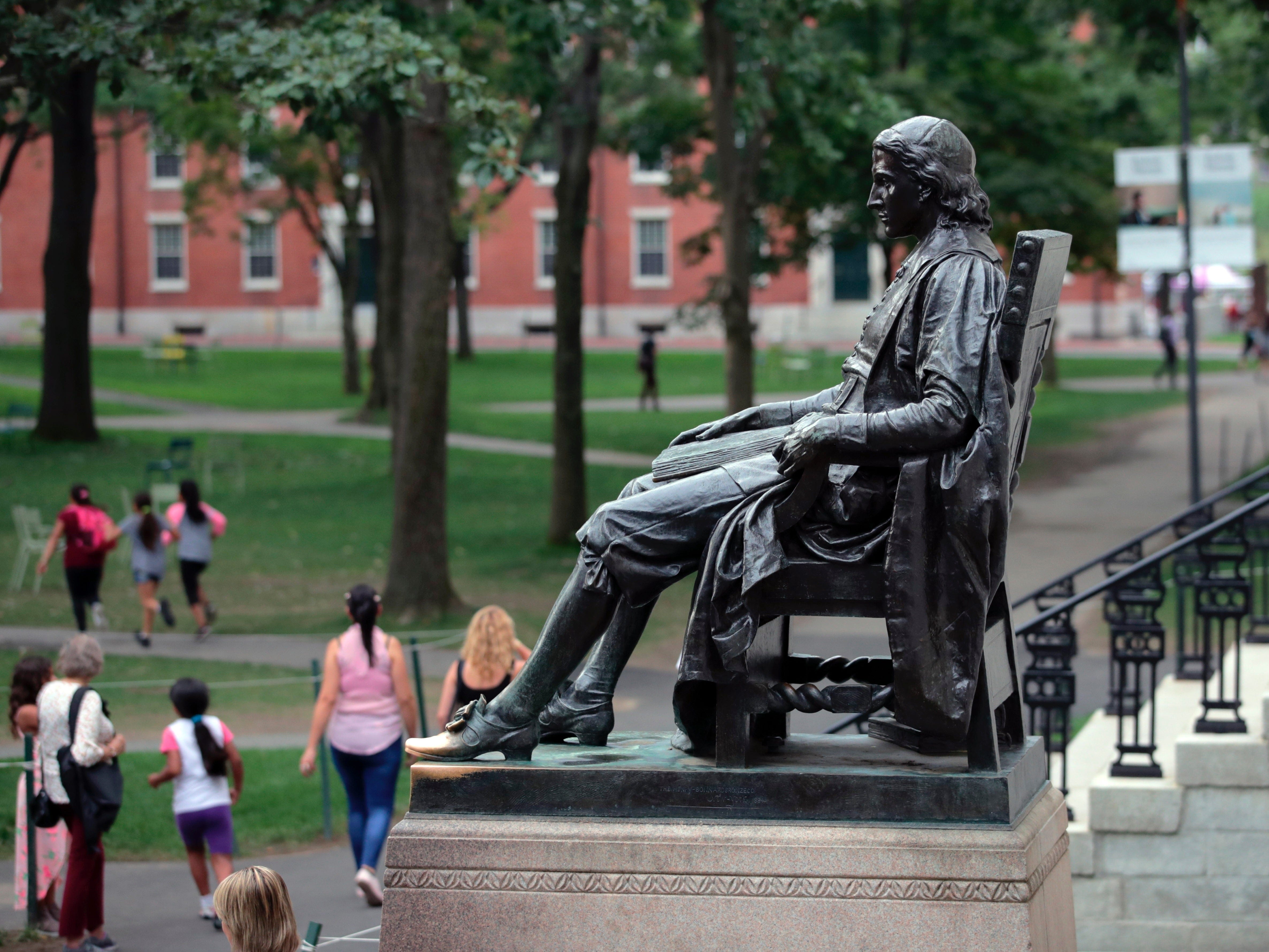