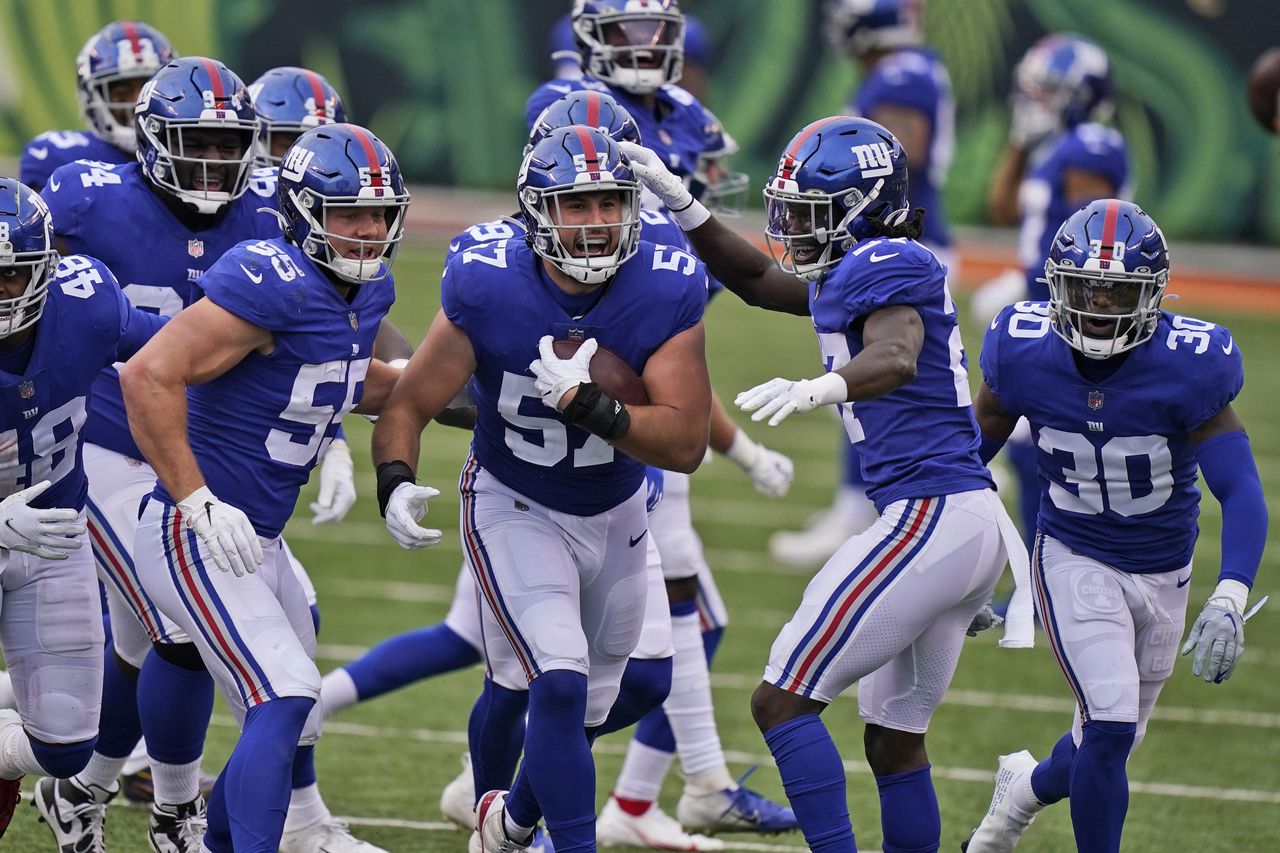 The ball was falling toward the turf, and of all the players who could dive in its path to make the interception, it had to be one who was activated off the Giants practice squad just 24 hours earlier. It had to be a backup, backup, backup defensive end out of football powerhouse Dartmouth who made the game-changing play.

It had to be Niko Lalos.

This was his kind of day — a gritty, tough, need-all-53-guys-on-the-roster afternoon. Lalos grabbed a deflected pass just inches from the ground in Cincinnati, a drive-killing turnover for a Giants defense that got the message about playing meaningful football in late November. If you had Lalos helping to seal the biggest win of the season (so far), congratulations — and, please, send us this week’s lottery numbers.

It wasn’t pretty — unless you love defense. And, as his left-for-dead Giants won their third in a row to pull into first place in the NFC East, you can bet that Joe Judge does.

Look: No one will confuse these Cincinnati Bengals for the Kansas City Chiefs, or Brandon Allen for Patrick Mahomes. The Bengals were a bad team with No. 1 overall pick Joe Burrow at quarterback, and with Allen — a former sixth-round pick in 2016 out of Arkansas who has bounced around the NFL ever since — they are tumbling toward the top of the draft again.

That didn’t matter in this one. The Giants defense knew it had to keep the Bengals off the scoreboard to have a shot in this game, especially when quarterback Daniel Jones limped off the field for good with a hamstring injury in the third quarter.

Colt McCoy, the backup quarterback pressed into duty, wasn’t going to win this game. Wayne Gallman, as tough as he was running the ball, wasn’t going to win this game. The Giants needed the defense to give its best performance of the season, and other than a fourth-quarter hiccup that made this more interesting than it had to be, that’s what happened.

The Bengals had one last chance, somehow, with the ball at midfield. But here came the Giants pass rush again, with defensive end Jabaal Sheard — signed off the Jaguars practice squad a month ago — crashing into Allen and forcing one more turnover to end the game.

It was that kind of day.

Here are five observations from Giants-Bengals:

With the notable exception of kicker Graham Gano, who practiced kicking in his hotel room as he quarantined with COVID-19 and was still perfect, the Giants special teams were shaky in this game — to put it mildly.

The kickoff team allowed a demoralizing 103-yard return for a touchdown, a play that tied the score and signaled that this was supposedly “easy” game for the Giants was going to go the distance. Then, the punt coverage team was duped on a fake punt in the third quarter when Giovani Bernard took a direct snap and rushed for a first down.

Even the usually stable Jabrill Peppers had a rough day on punt returns, letting the ball sail over his head and pinning the offense back inside the Giants’ 10-yard line. The Giants specialist are lucky the defense was ready for this one.

Already with two backup quarterbacks in the game, it appeared that the Bengals might have to go to their fourth-string passer in the third quarter. That’s how hard Dexter Lawrence, who had a huge game for the Giants, hit Bengals QB Brandon Allen as he was foolishly trying to scramble for a first down. He ended up in the grass with 342 pounds of defensive tackle on his back.

Lawrence was everywhere in the middle of the Giants defense in this game, both clogging the Bengals rushing attack and blowing up screen passes. Lawrence was already the team’s highest-graded defensive player, according to Pro Football Focus, and his steady improvement in his second season is one reason for the team’s resurgence.

Stop me if you’ve heard this one: Tight end Evan Engram made one great play in the first half, beating safety Vonn Bell on a 53-yard pass that set up the first touchdown, but erased it a quarter later with a fumble that ended a drive in Cincinnati territory.

He wasn’t the only offensive player who didn’t look sharp in the first half. Receiver Darius Slayton dropped what would have been a long touchdown pass, and Jones threw behind his target on a couple throws as this game was closer than it needed to be at intermission.

But there was Engram again, on the first drive of the second half, making a juggling catch on another long pass from Jones. The Giants crave consistency from their enigmatic tight end, but short of that, they’ll take more good plays than bad.

The Giants easily marched down the field on the opening drive, but even so, they faced a fourth-and-inches near the goal line. Given their success moving the ball, the choice to get the ball was an easy one: Wayne Gallman, who touched the ball seven times on nine plays during this drive, plunged into the end zone for the touchdown.

That’s what made what happened next so puzzling: Gallman had just four touches the rest of the half — and one of those was a 13-yard run where the starting running back carried Cincinnati defenders with him. Giants offensive coordinator Jason Garrett got too cute with his personnel on a day when the strategy seemed easy.

Gallman was one of the big reasons the Giants have bounced back from their 1-7 start to climb into contention, with 121 yards and three touchdowns in those back-to-back victories. Garrett should have kept him more involved early.

The decision to fire offensive line coach Marc Colombo sucked the air of the Giants’ bye week and lingered into last week, too. It was the perfect storm of a story, with a false report of a fist fight, dueling narratives spread in the national media and even the detail that the team’s security force had to break the news to Colombo instead of Judge.

But, from a football standpoint, it was a big non-story. The offensive line looked fine against the Bengals, with the exception of two early false starts and a killer late holding penalty from right tackle Cam Fleming. The run blocking was solid against a weak Cincinnati defense, and for the most part, Jones had plenty of time to operate with a clean pocket.

The biggest question was — and is — what this means for the Giants staff going forward. Will Dave DeGuglielmo be the only newcomer on this staff? Or will Judge, who clearly has the loudest voice in this organization now, continue to remake it with “his guys” in the offseason?

Steve Politi may be reached at [email protected].