Musk cofounded Neuralink in 2016, and it remained under the radar until 2017, when the Wall Street Journal broke the news that he had established the company to “merge computers with human brains.”

Developing brain chips is a curious side hustle for a man who is simultaneously running Tesla, his space exploration company SpaceX, and The Boring Company, which Musk hopes will dig underground transit systems for cities.

But Neuralink zeroes in on one of Musk’s main fears — artificial intelligence. The entrepreneur has frequently been vocal about his worries that AI could one day overshadow the human race. He’s founded a general-purpose research organization called OpenAI, but Neuralink has a much more tangible, futuristic goal of making AI-enabled devices capable of interacting with people’s brains.

In July 2019, Neuralink executives and Musk gave a presentation on the technology the firm has developed so far.

The big reveal was a tiny microchip that could, theoretically, be implanted behind a person’s ear with tiny threads containing electrodes fanning out into the brain.

More news on Neuralink’s progress is imminent, as Musk tweeted on Tuesday, August 25 that the company will broadcast a live demo of a “working Neuralink device” on Friday, August 28, at 3 p.m. Pacific time, althought it’s not yet clear exactly what this demo will entail.

Scientists have already created devices capable of both interpreting brain activity and stimulating the neurons in the brain. A memorable demonstration of the technology was in 2012 when paralyzed patients were able to control a robotic arm.

However, Elon Musk doesn’t want to stick with what is already possible. He has said, in classic Muskian style, that apart from treating neural conditions such as Parkinson’s, he hopes that Neuralink could one day facilitate a “symbiosis” between humans and AI. He also excitedly announced in 2019 that the company had successfully got a monkey to “control a computer with its brain.”

Business Insider spoke to two neuroscientists in 2019 to sort the science from the spin. They outlined three genuinely intriguing elements of Neuralink’s designs.

1. Floppy wires could move with the brain without causing damage

The wires on Neuralink’s proposed device uses could advance the field because of just how floppy they are, according to Andrew Hires, an assistant professor of neurobiology at the University of California, who spoke to Business Insider following Neuralink’s July 2019 presentation and the publication of the company’s white paper.

“The fact that they’re using these flexible wires is a significant innovation, particularly if they’re trying to get it into consumers,” Hires said. Each wire is slightly slimmer than a human hair and carries electrodes which are both able to detect brain activity and — theoretically — stimulate it.

“Stiff wires in the brain cause a lot of damage because the brain can move around,” Hires pointed out, adding that a living brain is very soft, much softer than the specimens you might have seen in jars, which have been stiffened with formaldehyde. “It’s a lot softer than jello,” he said. Floppy wires like the ones Neuralink described could potentially be a better solution for any device that’s going to spend a long period embedded in someone’s brain because they’re less likely to inflame or damage the tissue.

This is not a new technology, but it is recent enough that we don’t know if these wires could last more than a couple of years. “The technology’s only been out for like a year or two. It could be that these flexible wires are less reliable, less robust, maybe they’re gonna break,” Hires said.

Dr. Rylie Green of Imperial College London also noted that the material used to make the threads is quite a commonly used polymer in the field. She also noticed that the electrodes themselves are made of gold, which she calls a “research-level technology,” rather than being ready to put into people’s brains.

2. A sewing machine instead of a surgeon

One big problem with floppy wires is they can be difficult to thread into the brain, and for this Neuralink has invented something entirely new. The probes would be inserted into the brain by a device not dissimilar to a sewing machine, which would use a stiff needle to poke the threads into place about 1 millimeter into the outer surface of the brain, or the cortex.

Hires said the idea of this sewing machine is a significant innovation. He has had to perform insertions of similar devices into the brains of mice by hand. “Doing this stuff by hand, these are very fine things … it’s very hard to have a steady enough hand to do these things manually,” he said.

Specifically Hires was impressed by a feature on the machine designed to counteract the fact that the human brain likes to jiggle around. “There’s breathing, the heartbeat, and those two factors can move the brain around a little bit,” said Hires.

The feature is called online motion correction, and works by taking video of the brain’s blood vessels under a microscope and then using a robot to adjust the needle to move with those blood vessels.

Musk confirmed in a tweet on Tuesday that an updated version of the insertion machine will be shown at Friday’s demonstration. Previously Musk has said this machine could make implanting electrodes as easy as a LASIK eye surgery machine — although in his Tuesday tweet he said this was still a long way off.

The final weapon in Neuralink’s arsenal is the chip which will interpret the brain activity being picked up by the electrodes.

“There’s a problem with getting electrical signals out of the brain, and that is that they’re very small. And the farther they have to travel down a thin wire the more they’re going to get distorted by noise, because there’s always some electrical noise going on in the world around us. You want to be able to amplify and digitize the signal as close to the source as possible,” Hires said.

“From what they disclosed in their whitepaper, that chip looks beyond the state of the art … That’s going to enable you to record from more places with higher precision,” he said. “It’s sort of like upgrading your TV to go from standard definition to high definition.”

To Dr. Rylie Green, the most exciting thing about Neuralink wasn’t that any of these three technologies are groundbreaking, but rather that they’ve been brought together. “All those different aspects have been under development for quite some time, and it’s nice to see them all come together in one device,” she said.

Don’t get too excited about the monkeys

At the Neuralink presentation in 2019 Musk was eager to tell the audience that the technology had allowed a monkey to “control a computer with its brain,” but neither Hires nor Green were massively surprised or impressed by this.

“The monkey is not surfing the internet. The monkey is probably moving a cursor to move a little ball to try to match a target,” said Hires. Musk himself didn’t give any detail about Neuralink’s primate testing during the July presentation. “This is something you can already do with traditional brain-machine interfaces … I’m not surprised they’ve been able to achieve that,” added Hires.

“Doing it with this device is something that could be considered to be impressive or different based on the sheer size of them being quite small or them using different sorts of materials, but it’s difficult to elucidate that unless they’ve actually written it down [and] shown the data,” said Green.

Neuralink’s most likely use: Giving robotic limbs the feeling of touch

While Elon Musk is keen to extol the future merging of AI and human consciousness, Hires and Green were more excited by the near-term benefits the technology could bring.

“The first application you can imagine is better mental control for a robotic arm for someone who’s paralyzed,” said Hires. Green concurred with this, adding it could be used by patients with locked-in syndrome to give them “fine control” over robotic limbs.

Although neural control of robotic limbs has been around since 2012, Neuralink’s technology could enable the next big step — touch feedback, sometimes called haptic feedback. Theoretically, this could be possible if Neuralink’s chips recorded which areas of the brain are stimulated when we touch and interact with the world, and then the electrodes could use this information to stimulate the brains of people using robotic prostheses to simulate this sensation.

Neuralink’s electrodes won’t necessarily have to perfectly stimulate the right neurons to generate this feeling due to the brain’s ability to adapt.

“The hope, and I think it’s a reasonable hope … over time the cortex is able to re-learn and re-associate the electrical stimulation patterns. As long as there’s a consistent relationship with what you’re doing out in the world and what’s going on in the brain,” said Hires.

Both Hires and Green were more skeptical of Elon Musk’s stated aim — that Neuralink will one day facilitate the augmentation of human consciousness with artificial intelligence. However Hires did not rule it out entirely.

“To get to the level of integrating with AI, this is where [Musk] sort of is going off into aspirational fantasy land,” said Hires. “But it is hard to predict how technology is going to change twenty years.”

According to Hires, we would need electrodes precise enough to stimulate individual neurons and, perhaps more importantly, a better understanding of the brain itself. “We don’t understand the rules by which the brain re-organizes to learn things,” he said.

Green pointed towards the ethical problems which could arise in a world where Neuralink could connect AI to people’s brains. “The biggest concern is how you manage to actually protect information in that sort of interface,” she said.

Neuralink’s biggest hurdle also comes long before it tries to put AI in anyone’s brains. “To get any of these devices into your brain … is very, very high-risk surgery,” Green said, adding the idea of a healthy person opting for brain surgery was troubling.

“People do it because they have severe limitations and there is a potential there to improve their life. Doing it for fun is not a great idea,” she said.

This doesn’t rule out the possibility that Neuralink will become a real, applicable technology. “It could potentially happen in Elon Musk’s lifetime,” said Hires.

In May 2020, while on the “Joe Rogan Podcast”, Musk claimed Neuralink could be implanting chips in human test subjects within a year. Experts have questioned Musk’s claims on human testing timelines before (in 2019 he said he hoped to get a chip into a human patient by the end of 2020) and in an email sent to Business Insider on Tuesday, August 25, Green agreed it seemed unlikely that the tech could be ready to put in a person’s brain that fast.

“It is difficult to perceive human trials at such an accelerated rate because the regulatory studies that ensure safety take time that cannot be shortened,” Green said.

“Not only should animal trials be completed but the implantation process should be conducted on cadavers and shown to be repeatable and targeting the correct areas of the brain prior to use on human patients,” she added.

The Best Mattress Toppers On the Market, According to Thousands of Shoppers

Wed Aug 26 , 2020
Tempur-Pedic A good night’s sleep sans any tossing, turning, sweating, or body discomfort is easy for some and a dream for others. However it can become a much more attainable goal for all with the help of a good mattress. While chucking your mattress in favor of a new one […] 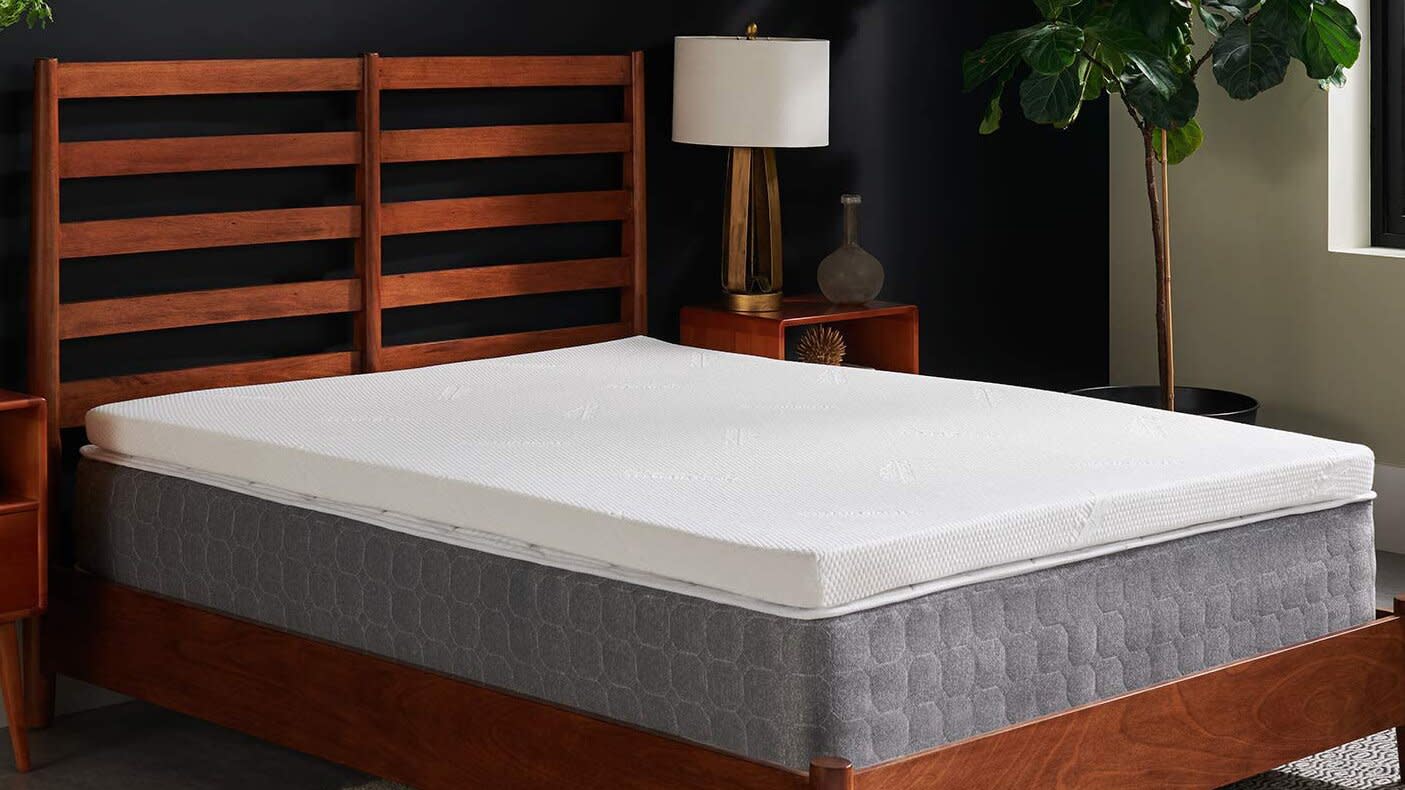