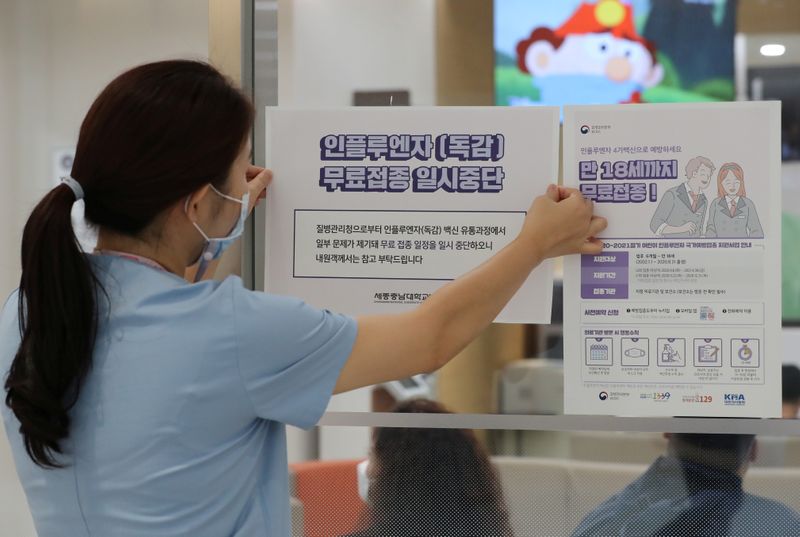 © Reuters. A health worker attaches a notice for suspension of influenza vaccination programs on an entrance of a hospital in Sejong

SEOUL (Reuters) – South Koreans will forego some of their most cherished traditions when they celebrate their thanksgiving holiday of Chuseok this week, as the coronavirus forces many to hold virtual services instead of visiting their ancestral sites.

COVID-19 has given impetus to cultural shifts already taking place in a once Confucian society that has become Asia’s fourth-largest economy, which is seeing an erosion in traditional family structures and a rapidly aging population.

Authorities have urged people to refrain from travel and follow social-distancing guidelines during the five-day break starting on Wednesday, even though the rate of new COVID-19 cases has slowed.

Lee Yong-su, 34, whose ancestors founded Korea’s last ruling dynasty of Joseon, said he would not make the customary visit to his parents, preferring instead staying home with his pregnant wife and six-year-old son.

“My father said we can honour our ancestors from the heart, sharing a news article about how other famous families would skip this year’s service in bad years,” Lee told Reuters.

Lee Chi-eok, the 17th-generation son of Lee Hwang, one of the greatest Korean Confucian scholars from Joseon, said some of the old traditions were fading even before the novel coronavirus struck, due to trends like urbanisation and lower birth rates.

His family once performed dozens of rites every year, involving complex rules about how to prepare and place food offerings. This year, in line with the COVID-19 guidelines, there would be none.

“Those rituals were a formal yet welcoming party in slow agricultural communities, where people gather and enjoy good food, but the current fast-paced society can’t afford it,” said Lee, a research fellow at the Academy of Korean Studies.

Lee Hwang, he added, also “taught against red tape, and I think the traditions should keep up with times”.

Korean media reported that cemeteries and memorial homes greeted less visitors than usual on the first day of the holiday, with some offering online services.

To be sure, not everyone is following the guidelines against travel. More than 230,000 people are expected to visit the resort island of Jeju this week, compared with 190,000 last year, local authorities said. Many golf courses and beach resorts along the east coast are fully booked.

“Many of my friends were planning a trip instead of visiting their parents,” said Ko Dong-hee, a 35-year-old housewife. “I’m still going to visit my in-laws, which isn’t my choice but at least they’re holding simplified ancestral rites.”

Wed Sep 30 , 2020
An employee is protected by a plexiglass shield while processing a skier at the reopening of Arapahoe Basin Ski Resort, which closed in mid-March to help in the effort to stop the spread of the new coronavirus, in a Wednesday, May 27, 2020 file photo, in Keystone, Colo. An executive […]