Federal prosecutors on Thursday unsealed indictments against one-time presidential aide Steve Bannon and three others on charges of taking money donated to help build a wall along the southern border.

Bannon, Brian Kolfage, Andrew Badolato, Timothy Shea “and others orchestrated a scheme to defraud hundreds of thousands of donors,” according to prosecutors in the U.S. Attorney’s office for the Southern District of New York.

The defendants’ online crowdfunding campaign “We Build The Wall” raised more than $25 million, with Kolfage “repeatedly and falsely assured the public that he would ‘not take a penny in salary,'” according to the indictment. And Bannon “publicly stated, ‘we’re a volunteer organization,’” the court document said.

But in fact, prosecutors said, the defendants took hundreds of thousands of donated dollars and used them for personal expenses.

Bannon was taken into custody by the U.S. Postal Inspection Service on Thursday morning, officials said. He’s expected to make his first appearance in court later on Thursday.

He was aboard a 150-foot-long yacht in Long Island Sound, off the coast of Westbrook, Connecticut, when he was arrested at about 7:15 a.m., law enforcement sources told NBC News. Bannon is not the owner of the vessel and the arrest was made without incident.

Bannon is the former executive chairman of Breitbart News and once served as chief strategist for President Donald Trump.

During his initial court appearance Thursday in Manhattan, Bannon had his hands cuffed in front of him while wearing a white shirt with blue stripes with the top button undone.

Bannon, who wore a mask, pleaded not guilty.

Bannon was ordered to post a $5 million bond, secured by $1.75 million in cash or property by Sept. 3. Conditions of his bail include bans on using private jets or yachts to travel, surrender of his passport and limited travel within Connecticut, New York and Washington D.C.

He’s also prohibited from talking to any of his co-defendants.

“I think it’s a very sad thing for Mr. Bannon,” Trump told reporters in the Oval Office on Thursday, during a meeting with Iraqi Prime Minister Mustafa Al-Kadhim. “I didn’t know any of the other people either, but it’s it’s sad. It’s very sad.”

And as the president struggled to gain funding for the wall — which he promised Mexico would pay for during his 2016 campaign — the group “We Build The Wall” vowed to step in with donations that go completely toward that effort.

“Those representations were false,” according to the indictment.

“In truth, Kolfage, Bannon, Badolato and Shea received hundreds of thousands of dollars in donor funds from We Build the Wall, which they each used in a manner inconsistent with the organization’s public representations.”

Trump said Thursday that he was never in favor of private funding for the wall.

“I know nothing about the project, other than I didn’t like, when I read about it, I didn’t like it,” Trump said.

“I said this is for government, this isn’t for private people, and it sounded to me like showboating and I think I let my opinion be very strongly stated at the time. I didn’t like it, it was showboating and maybe looking for funds, but you’ll have to see what happens.”

Kolfage pocketed more than $350,000 in “We Build The Wall” money while Bannon used a separate non-profit organization under his control to receive more than $1 million from wall-building fund, federal authorities said.

“They did so by using fake invoices and sham ‘vendor’ arrangements, among other ways, to ensure, as Kolfage noted in a text message to Badolato, that his pay arrangement remained ‘confidential’ and kept on a ‘need to know’ basis,” prosecutors said.

Kolfage used some of the money for personal expenses such as “home renovations, payments toward a boat, a luxury SUV, a golf cart, jewelry, cosmetic surgery, personal tax payments and credit card debt,” according to the indictment.

Kolfage recently called into Bannon’s livestream show, “War Room: Pandemic,” and asked supporters of We Build The Wall to not use the platform GoFundMe for donations.

Kolfage said he was upset with GoFundMe for allegedly refusing to allow its platform to be used in his efforts to raise money for people hurt by the Black Lives Matter movement.

“Don’t go to GoFundMe anymore, screw them, go straight to our website,” Kolfage said on the show.

He did not elaborate on the nature of the violation.

Kolfage is listed as the founder of We Build The Wall, with Bannon named as advisory board chairman, according to the group’s website.

The group didn’t directly fund any government-built barriers, but instead sought to purchase private lands along the border and construct walls there.

In May of 2019, We Build the Wall was served a cease and desist letter from the city of Sunland Park, New Mexico, near El Paso, Texas, after the group began building sections of wall without a permit.

And Trump lashed out at private efforts to build border walls in July when a 3-mile portion of a We Build the Wall barrier in Mission, Texas began to erode following a hurricane.

“I disagreed with doing this very small (tiny) section of wall, in a tricky area, by a private group which raised money by ads,” Trump tweeted. “It was only done to make me look bad, and perhsps it now doesn’t even work. Should have been built like rest of Wall, 500 plus miles.”

Dustin Stockton, a longtime Bannon ally and public relations contact for #GoFundTheWall, tweeted that he “got raided by SWAT serving a warrant for my phone out of SDNY” early Thursday morning.

Stockton is a Republican political operative and former writer at Breitbart. He and Bannon launched the Breitbart offshoot Big League Politics in 2017.

In 2018, he and his girlfriend, Jennifer Lawrence, spearheaded media strategy for Kolfage’s wall fundraising campaign. Stockton was not arrested and called the raid “political intimidation” in tweets on Thursday morning.

Lawrence is listed as We Build The Wall’s communications director.

Stockton said, in a text messages to NBC News, that he and Lawrence were inside their recreational vehicle in Mesquite, Nevada, when authorities arrived at about 5:30 a.m. Their cell phones were the only items seized in the raid, he said.

In a tweet later Thursday morning, Stockton said We Build The Wall “delivered segments of wall for a fraction of what it would have cost the government to its donors.”

“The selective leak of certain operating expenses right before an election is not in service to WBTW donors,” Stockton added. “It’s political intimidation.”

Prosecutors within the Southern District of New York, based in Lower Manhattan, are widely known as the most independent and non-partisan group within the U.S. Attorney’s Office.

It takes wide latitude to investigate white collar criminals and organized crime, with law enforcement insiders often quipping that SDNY stands for the “Sovereign District of New York” because of its autonomy.

But back in June, the office was rocked by Friday night efforts to oust U.S. Attorney Geoffrey Berman. The Department of Justice announced he had resigned, only to have Berman say he had not.

While Berman lost that battle with Attorney General William Barr within 24 hours, he won a major concession. Berman secured the temporary appointment of trusted deputy, Audrey Strauss, to take his spot – rather than the administration’s announced choice, Jay Clayton, the head of the Securities and Exchange Commission.

As he went out the door, Berman said key investigations would continue.

“I will step down when a presidentially appointed nominee is confirmed by the Senate,” he said in a statement. “Until then, our investigations will move forward without delay or interruption. I cherish every day that I work with the men and women of this Office to pursue justice without fear or favor — and intend to ensure that this Office’s important cases continue unimpeded.”

Fri Aug 21 , 2020
We’ve dropped the paywall on this article delivering critical public safety information in this developing story. Please consider a digital subscription to The Bee to support local journalists. The LNU Lightning Complex Fire is continuing to surge through the North Bay area on Thursday after scorching more than 131,000 acres […] 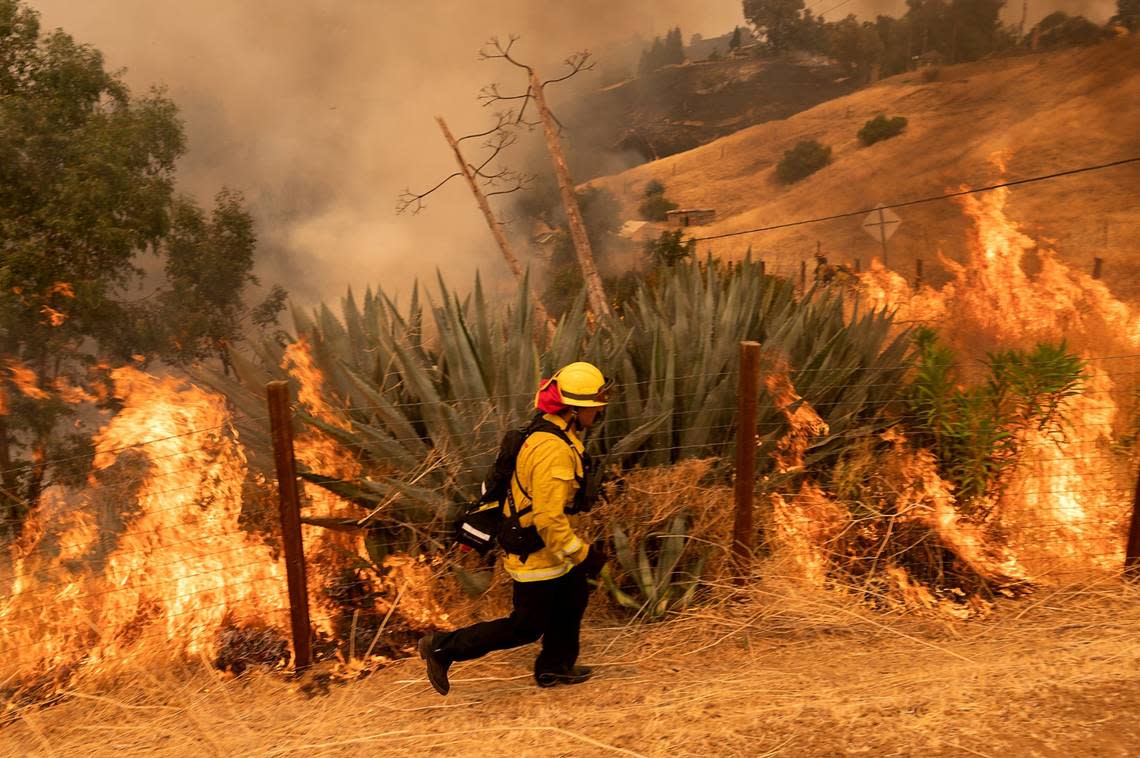