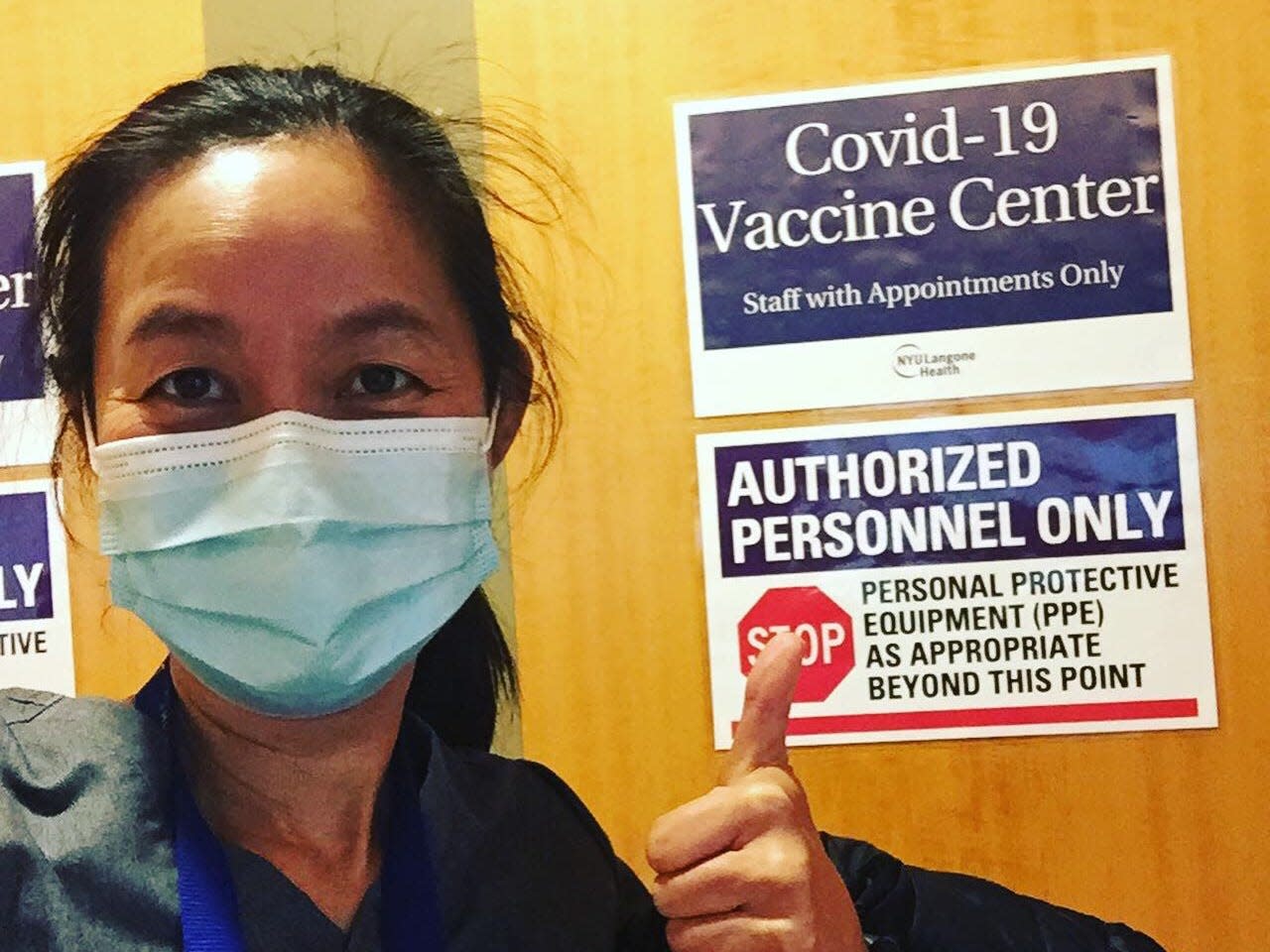 As a pediatric ER physician at NYU’s Bellevue Hospital, she believes everyone should get vaccinated for medical reasons and knew she could help.

Tay was able to successfully schedule appointments within two days for her two neighbors, who are in their 80s. After, she realized how she could serve a greater need.

“I thought, well, everybody in our building should get it because it would just make it a much safer place to live,” she told Insider. “So I posted signs in the mail room and then the laundry room. And I was looking specifically for seniors, because I figured the younger people can just do this on their own. Then people started calling me from within the building and it just became a thing.”

Word spread and more and more people who needed assistance with making appointments started reaching out to Tay.

“Pretty soon, I was making appointments for seniors all across New York City,” Tay said.

Tay said she spent the two weeks of vacation she had off from work making vaccine appointments. By the end of February, she’d made over 200 appointments all on her own. During the process, she realized there were whole communities in addition to the elderly who couldn’t make their own vaccine appointments, like those who were unable to afford a computer or didn’t have internet access, as well as those with language barriers or who were deaf or blind.

But then her vacation ended.

“It got to be overwhelming because I had to go back to work,” Tay said. “But there was so much work that needed to be done that I wanted to tap into other groups of people.”

Madalyn Fernbach, 23, is a member of the Facebook group and a clinical research coordinator at Memorial Sloan Kettering cancer center who’s been helping Tay. She joined the Facebook group initially in early February to secure a vaccine appointment for her grandmother, but saw an opportunity to continue to help out others in need of assistance.

Since coming on alongside Tay, Fernbach said she’s made 50 appointments, including one for a woman who specifically wanted the Johnson & Johnson vaccine.

The first appointment Fernbach was able to find for her was at 2 a.m. The woman enthusiastically took the slot and immediately asked Fernbach if she could find an appointment for her husband. Fernbach tried to explain to the woman how difficult that would be, but right at that moment another appointment for the same time popped up. The couple was extremely grateful for Fernbach’s assistance and said their vaccination process went smoothly.

“I work from home right now, so this is a great way without being on the front lines to do your part and contribute to the pandemic efforts,” Fernbach said. “I challenge other healthcare workers who have the luxury of working from home who want to make a difference to join causes like this and help local seniors or local community members find ways to get their appointments.” As of March 10, Tay’s entire team has made about 300 vaccine appointments.

Making the process as seamless as possible for vulnerable communities

To make the process as smooth as possible, Tay has a phone number that those who need help can call, and she’s also set up a Gmail account for email requests that are then sent to volunteers like Fernbach. As of March 10, there are 870 requests to be processed.

Tay also created more flyers in multiple languages to put up throughout the city in places like senior centers. She said she asked a friend for help with the Spanish translation, while her father helped her translate the flyer into Chinese.

“I’ve definitely tapped into the Chinese community, but I wish that we could also do the same with other pockets in New York City as well,” she said.

Tay said that the most difficult community to reach are the elderly who don’t own computers because the main way for them to find out about her is by seeing the flyers around town. At a time like this when everyone is staying indoors it’s even harder, and often they can only be reached by word of mouth.

To snag appointments, Tay and her now dozens of volunteers routinely visit seven or eight websites with vaccination slots, like the NYC COVID-19 Vaccine Finder and Vax 4 NYC, and refresh the pages until they can find an opening.

Tay said she works on this during evenings and weekends when she isn’t at her day job, and Fernbach even helps out on her lunch break. The team also follows the Twitter account Turbo Vax (@turbovax), a bot account that tweets available vaccine appointments from city- and state-run administration sites.

Finding an appointment is one challenge of the process, but another is getting some residents who are eligible for the vaccine to share the required information.

Tay said that she was recently helping one gentleman over the phone who refused to give her the information she needed to make his appointment, like his address and birthday. They went back and forth, and he got rude with her before hanging up the phone. She happened to see a location right next to where he lived and made the appointment for him anyways.

“He called me back and he was very apologetic,” she said. “‘I didn’t know him, but I knew he needed it.” She added that the man ended up making a donation to Bellevue to thank her for her service.

“They’re just afraid to appear,” she said. “They’re afraid to get the vaccine, but they need to. In Queens and in Brooklyn, there’s different pockets with a lot of immigrants who have really suffered a lot from COVID. And that is the population that I’m trying to target so we can help keep everybody safe.”

She said the people she’s helped are often very grateful, but she’s not looking for any tokens of appreciation.

“We get a lot of people who really want to give us things or take us out to lunch,” Tay said. “And really this is not about anything that’s materialistic in any way. This is simply just so that everybody can become healthy.”