Amazon Prime Video has released a new trailer for its long-gestating American adaptation of “Utopia.”

The one-minute trailer imagines the end of the world with snippets of young comic fans who discover that the conspiracy — and beloved protagonist — in a graphic novel (entitled “Utopia”) is real. Its ominous cinematography and editing capture their high-stakes journey to save humanity.

“It is a story about a rogue scientist who created biological warfare,” says an unnamed character in the trailer, which you can watch above.

“We have no idea what the end of the world’s gonna bring, [but] french cut string beans aren’t gonna save anybody,” says another character.

During the [email protected] panel for the show, writer and executive producer Gillian Flynn said that even though she started this project almost seven years ago, it has “never felt more resonant.” She also shared her adaptation process for fans of the original British series.

“My idea was to not only Americanize it — and deal with things that are resonant to Americans in a lot of ways — but to also make things gritty and dirty and nasty in a very realistic way,” she said. “Whereas [Dennis Kelly, the U.K. show’s writer] took his cue from the graphic novels themselves, I took my cue more from the ’70s paranoia thrillers that I love.”

John Cusack, who plays Dr. Kevin Christie, the CEO of a multinational corporation producing new food sources, said he got hooked on the show as soon as he received a call from Flynn. He got his hands on six or seven episodes and read them all at once, finishing them by three in the morning.

“It was amazing writing, great characters and truly a world and a take that I hadn’t seen before,” he said. “Really ambitious, really audacious, sophisticated, crude, shocking, funny as hell.”

Of his character, Cusack said: “He’s someone who’s trying to make the world a better place from the 1% down. What he says to his family every day is, ‘What have you done to earn your place in this crowded world?’ So that’s kind of a mantra he repeats. So every day, people who work at his company or people who he makes contact with feel that they have a need to be of service to this world, not just take.”

Wilson, who plays a lower-level scientist named Michael Sterns, shared that although his character has “been neglected and passed over for grants, through his past work, he ends up connected to a much larger global kind of medical conspiracy and gets drawn in and slowly by slowly, episode by episode, becomes an unlikely hero.”

Similar to the British series, Amazon’s “Utopia” follows comic fans who first meet online, bonding over their obsession of a seemingly fictional comic, but soon they are drawn into a high-octane adventure to save the world after meeting the comic’s famed central character Jessica Hyde (Sasha Lane).

Previously, Flynn told Variety the show was “like catnip” to her.  “Dennis Kelly’s show blew my mind, and he has been so incredibly generous in letting me crack open his world and play around in it and make it my own weird, wild place. ‘Utopia’ is all about exploring resonant issues within dark, twisted storytelling — it’s a series that’s urgent and current and a little holy-crap, but a hell of a lot of fun.”

“Utopia” will launch this fall on Amazon.

Cosplayers in the Age of COVID-19

Fri Jul 24 , 2020
Click here to read the full article. Every summer, some 130,000 attendees gather in San Diego for Comic-Con to celebrate entertainment, fandom and geek culture. Amy Vaughn had hoped to be one of them. Vaughn, an engineer, has wanted to attend the event ever since she started cosplaying two years […] 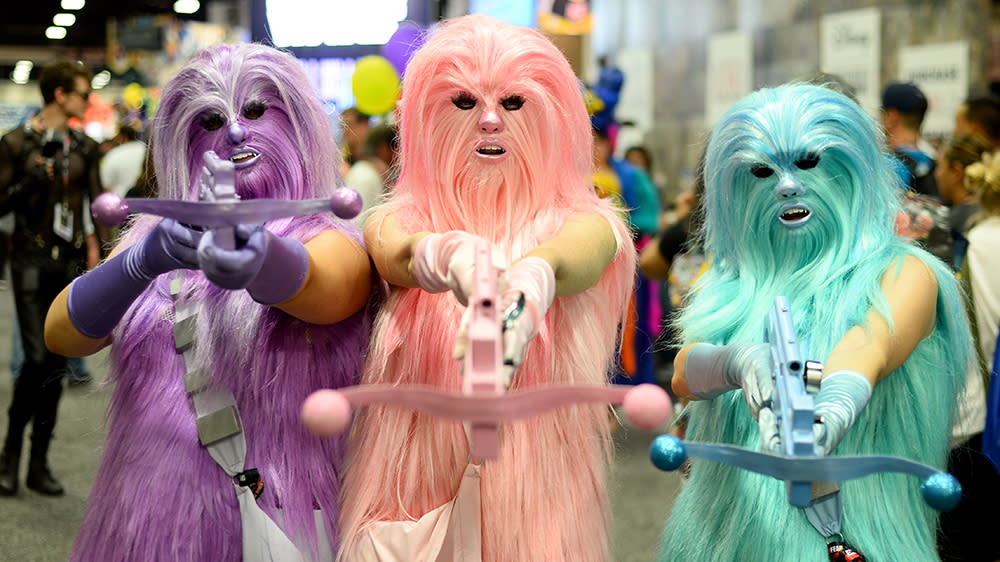