In an apartment high above Manhattan, paintings by van Gogh, Matisse and Modigliani overlooked the East River and tribal artworks and Egyptian antiquities mingled with Giacometti bronzes and furniture. Several blocks west, a monumental Miró bronze stood guard by a skyscraper known for its sloping glass facade and masterpieces inside.

But now the future of one of the finest 20th-century art collections hangs in the balance following the death last month of Sheldon Solow, 92, the self-made real estate tycoon who amassed it over five decades. Many works decorated the Solows’ flat at United Nations Plaza. A rotating cast of trophies was displayed in a street-facing gallery at the Solow Building on West 57th Street, the home of the Solow Art and Architecture Foundation and the heart of his real estate empire.

The art world is holding its breath. In the past decade, Mr. Solow emerged as a major seller of masterpieces at auction, and new consignments from his eclectic collection could infuse as much as $500 million into today’s market — which has been starved for supply at the high end since the pandemic hit — according to Elizabeth von Habsburg, managing director of Winston Art Group, an appraisal and advisory firm. “We are keenly awaiting the news on the disposition of this estate,” she said. “The potential is really exciting.”

In 2018, Solow came under fire from critics for having benefited from the tax-exempt status his art foundation has held since 1991 while keeping the works in the collection largely inaccessible to the public. His family is now grappling with the possibility of changing course by opening a museum, a potentially significant event in the cultural life of New York City and one that would allow the public to see the works. The Solows would be joining other wealthy families in the city with private museums, including Glenn Fuhrman’s FLAG Art Foundation, J. Tomilson Hill and Peter Brant.

It’s still unclear whether any museum that Mr. Solow’s heirs create would be in the Solow Building, would display only works the foundation owns or also feature pieces from the Solow private collection, or when such a museum might open.

Their elder son, Stefan Soloviev, who confirmed in a text message on Sunday that he is now in charge of the foundation, said in a subsequent message that “the collection will be accessible to the public.” Asked whether that would be in a private museum or elsewhere, he said, “Wherever I want.”

Mr. Solow’s beneficiaries would be able to deduct from their income tax the market value of any personal art they give the museum, according to Ralph Lerner, art adviser and co-author of “Art Law.”

One space that was envisioned for the museum is on the ground floor of the Solow Building, with an entrance on West 58th Street facing the Plaza Hotel. It’s currently hosting the Leila Heller Gallery’s pop-up exhibition of art by Ms. Fonssagrives Solow, a sculptor and jewelry designer. Her colorful, curvilinear abstract shapes and white alienlike figures are set against a backdrop of three large Miró paintings, owned by the Solow Foundation and valued at $60 million, according to the foundation’s tax return for the period ending Nov. 30, 2018.

Also unclear is what will happen to one of the gems of the collection, a 15th-century painting by Sandro Botticelli, “Young Man Holding a Roundel.” The portrait spent decades on view at the National Gallery of Art in Washington and the Metropolitan Museum of Art. In September, it was consigned to Sotheby’s and is scheduled to be part of an old masters auction on Jan. 28, according to Derek Parsons, a Sotheby’s spokesman. Acquired almost 40 years ago by Mr. Solow for just over $1 million, the painting may fetch more than $80 million.

Mr. Solow intended to use the proceeds from the Botticelli sale to create “a little jewel in the heart of Manhattan,’’ said Ms. Fonssagrives Solow, 79. But in November, she told a reporter “we may hold that,” adding, “We may make it the centerpiece of the museum. It is too early to tell.”

When a seller pulls a work after agreeing to consign it, auction houses charge a withdrawal fee. The amount is negotiable but typically ranges between 10 percent and 25 percent of the estimate depending on the auction house, according to Thomas C. Danziger, an attorney specializing in art transactions.

“The principle is that the auction house wants to make it painful enough so that a consignor thinks twice,” said Mr. Danziger, who is not involved in the Botticelli consignment. “They don’t want you to pull the work if you get a better offer.”

The son of a Brooklyn bricklayer, Mr. Solow built a real estate empire from scratch and was known as tough and litigious. Despite being a major collector of modern art, he kept a low profile in the art world and was acutely private, according to people who knew him, often buying and selling art anonymously.

“He was definitely of a generation who started when the art world was much smaller,’’ said David Norman, chairman of the Americas at Phillips auction house and formerly Sotheby’s top expert in Impressionist and modern art. “They made their own choices and spoke with the great dealers of their era, but relied on themselves.”

The 13 specific artworks listed among the assets of the Solow Foundation, including the Botticelli, had a combined market value of $340.6 million in 2018, according to its last available tax return. The value of Solow’s personal collection is harder to gauge, partly because he’s sold many key pieces in the past decade, generating more than $400 million at auction.

The Solow art could infuse as much as $500 million into the market, Ms. von Habsburg said. Despite the fact that the auction houses have pivoted to online auctions, and have held more of them this year, public sales at Christie’s, Sotheby’s and Phillips declined 26 percent to $7.3 billion through Dec. 16 over last year, according to the market research firm ArtTactic. Should the family decide to sell the art and not go ahead with the museum, “there would be a tremendous competition,” said the art dealer Bill Acquavella.

This year, Acquavella Galleries joined forces with two competitors, Gagosian and Pace, to outbid Christie’s, Sotheby’s and Phillips for the estate of the financier Don Marron. The triumvirate would compete with the three auction houses for the Solow trove as well, Mr. Acquavella said.

But the market’s excitement about the potential Solow sales may be premature.

“He has his surviving spouse, he has kids,” said Gregoire Billault, head of Sotheby’s contemporary art department in New York. “The family will decide whether they have to sell or not.”

When he died, Sheldon Solow had a net worth of $3.1 billion, according to the Bloomberg Billionaires Index. He had been collecting for decades, acquiring major pieces by Giacometti, Miró and Picasso since the 1970s, and setting records both as a buyer and seller. Those who visited his apartment remember pieces by Balthus and Dubuffet, Rothko and van Gogh.

Six years later, he traveled to London to bid in person on a Fauve masterpiece by Matisse, according to Phyllis Hattis, an art dealer and friend of the Solows. “Le Jeune Marin I” (“The Young Sailor I”) was once owned by Gertrude Stein’s eldest brother, Michael.

Mr. Solow didn’t want to betray his interest in the work and stood in the back of the salesroom, according to Ms. Hattis. The 1906 canvas sold for $1.6 million. The New York Times would later recount that the sale “rewrote the auction record for 20th-century art and set a new high for any painting other than an old master.”

That work could be worth $75 million now, according to Mr. Acquavella. The second, more finished version of the young sailor, is at the Metropolitan Museum of Art.

To maximize his returns as a seller, he never took guarantees, the minimum prices offered by the auction houses to sellers in exchange for sharing the upside, auction executives said. Instead, Mr. Solow would negotiate “enhanced hammer” deals, taking a percentage of the auction commission.

“And the sales results proved him right every time,” said the art dealer David Nash.

In 2016, Mr. Solow Picasso’s “Femme Assise” to Sotheby’s in London. The sale took place on the eve of the Brexit vote while the pound plunged wildly. Still the work ended up making $63.5 million. “The Pointing Man,” which Mr. Solow bought in 1970 and sold for $141.3 million at Christie’s in 2015, remains an auction record for both a Giacometti and a sculpture.

He learned from people like the art dealer Pierre Matisse, the architect Gordon Bunshaft, who designed the Solow Building, and William Rubin, then the powerful curator of painting and sculpture at the Museum of Modern Art, according to Ms. Hattis, Mr. Rubin’s widow.

“Sheldon was a serious and passionate collector” Ms. Hattis said. “He didn’t need art to gain social status in New York City. He was collecting for genuine reasons. He did it to enhance his own life, for his own sense of beauty and living with greatness.”

For most people, his taste is on view at the Solow Building, where Giacometti’s 9-foot-tall standing woman is parked by the elevators.

“Dubuffet, Kline, Diebenkorn, Miró, Matisse — he used to keep all these extraordinary pictures there,” said Brett Gorvy, a co-owner of Levy Gorvy Gallery and former Christie’s executive. “He was very forward- thinking as the owner of the building to have art displayed on the ground floor. How many collectors have a front window on 57th Street?”

But not everyone was charmed. In 2017, Ethan Arnheim, a Washington-based art lover and activist, launched a website, scrutinizing the foundation and mocking its inaccessibility. Daily operating hours were listed as “none,’’ “inaccessible,’’ “closed” and “absolutely not.”

“While it is not illegal,” Mr. Arnheim said this week, “it operates as a nonprofit with significant tax benefits and we as taxpayers are subsidizing the collection.”

The possibility of a museum is “exciting,” he added. “It suggests that tangible steps are being taken to make the work public. I would love to turn the website over to them and enable people to go visit the collection.’’

Katya Kazakina has covered the art market since 2006 and received awards from the Newswomen’s Club of New York, the Society of the Silurians and the Los Angeles Press Club.

Mon Dec 21 , 2020
LUDLOW, Mass. (WWLP) – The Christmas shopping season can often make or break new businesses gaining a foothold in the marketplace for the first time. Earlier this year, Ray and Noreen Vigneault of Belchertown opened two PLAYNOW! toy stores in busy shopping areas of Westfield and Ludlow. When he wasn’t […] 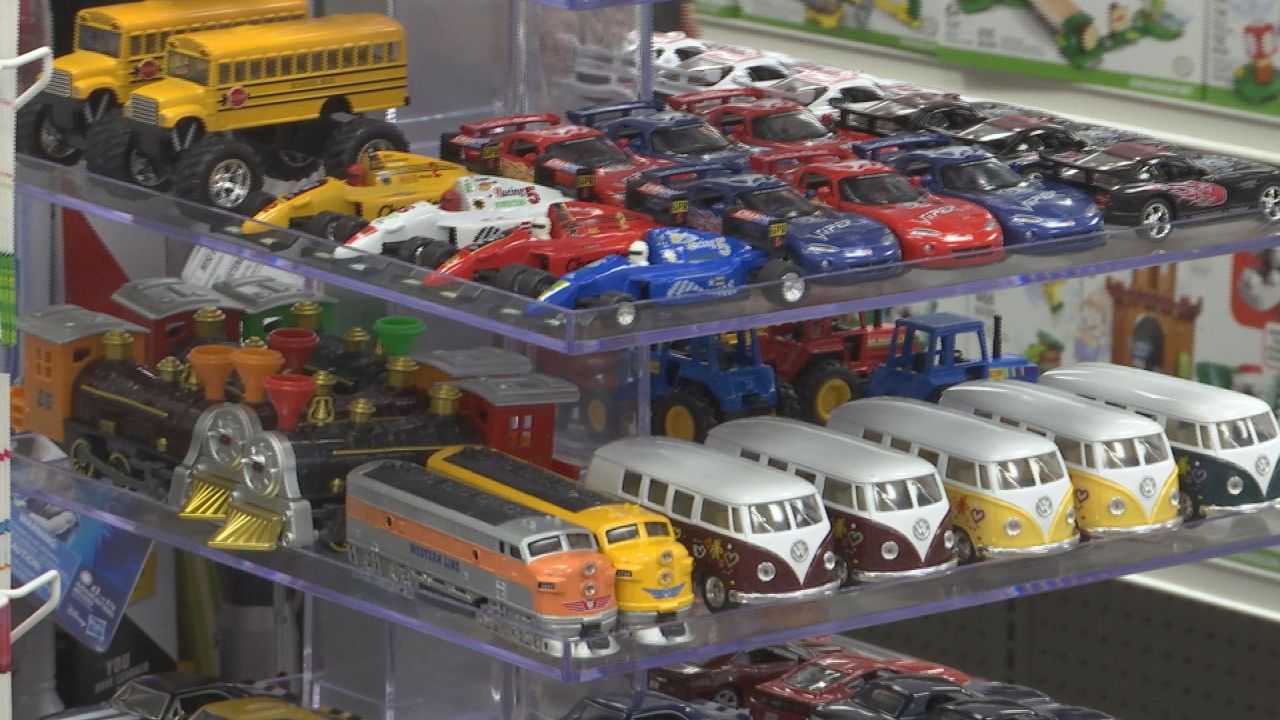