Over just six months, the S&P 500 Index (SPX) has gone from record highs to three-year lows back to the doorstep of new record highs this morning.

As this relentless rally rolls on, it’s important to keep in mind that a number is just a number. Still, it’s hard to ignore the symbolism if the SPX moves above that old February intraday level of 3393. Six months may seem like a long time, but it took nearly a decade for stocks to revisit their 2007 highs after the financial crisis. Things seem to be going in fast motion as the SPX is up seven sessions in a row.

This morning, people are bidding up stocks ahead of the bell in hopes that a Russian vaccine approval could be the first step toward ending the crisis. It’s positive news, but might get viewed with the old “fish eye.” We’ll believe it when we see it and the research behind it.

As The New York Times reported, the vaccine hasn’t gone through Phase III tests with thousands of volunteers in a blinded study. That’s the gold standard, so without it, there are lots of questions. That’s the kind of trial underway in Europe and the U.S., and it takes time. Health authorities don’t expect any vaccine to be available here until the end of this year, at the earliest.

Still, the market’s current mode seems to be “green light ahead” on any kind of positive news, and sometimes without any news at all. It’s hard to fight the sentiment, but hopefully, investors are taking extra care and keeping their stock market exposure at levels they’re comfortable having. Now might be a good time to check the stock percentage of your portfolio, because this long rally might have raised it.

Meanwhile, the 10-year Treasury yield rose back above 0.6% this morning amid hopes of a U.S. fiscal stimulus package, crude is up, and gold is getting smacked. Volatility continues to peel back, and it could be interesting to see if the Cboe Volatility Index (VIX) can go under 20 today for the first time since the crisis. It’s knocking on the door after quite a journey down from historic highs above 80 in March.

All this could imply that a “risk-on” mood is in the driver’s seat for now. Individual investors will have to decide how comfortable they are chasing this equity rally, especially when we’re still a long way from a vaccine here at home and U.S./China tensions remain high.

This week is off to a nice start, though how nice depends on how you look at it.

The 30-stock Dow Jones Industrial Average ($DJI) took its own path yesterday, something that happens a lot. The 350-point gain came mostly on the shoulders of Boeing Co (NYSE: BA) and Nike Inc (NYSE: NKE), and might have reflected more optimism about the reopening situation.

Other indices linked to a much broader chunk of the economy than the narrow $DJI had far more subdued days. The Nasdaq (COMP) actually lost more ground and goes into today down two sessions in a row for the first time since July 24. Facebook, Inc. (NASDAQ: FB) and Netflix Inc. (NASDAQ: NFLX) both took it on the chin, so we’ll see if they can fight back. The COMP actually turned a bit lower in pre-market trading this morning.

It’s way too early to call the COMP losses a trend when you consider the FAANGs made all-time highs less than a week ago. It’s not too uncommon to see a little consolidation, profit-taking, and possibly sector rotation after a run like Tech just had. The theme in the media is that value and cyclical sectors like small-caps and Energy are starting to see more of a bid, and there may be something to that.

Ironically, this possible shift might slow down the biggest indices, because Tech—especially the five or six biggest Tech stocks—is so heavily represented. If Tech slows and becomes cyclical gain, that’s probably a good thing for the economy but not so great for index values.

Until today, the SPX seemed to be flagging a bit as it approached all-time highs. The Feb. 19 close of 3386 and intraday high of 3393 are both in sight amid exuberance over the Russian virus news.

Speaking of exuberance, it’s really exciting to see how small-caps have steadily climbed over the last month. The Russell 2000 (RUT) is up 12% since July 10, which is way better than the 5% rise for the SPX since then (see chart). The old market wisdom you tend to hear is that RUT strength reflects better feelings about the domestic economy because so many smaller companies have deeper roots here at home and not as much exposure outside the U.S.

Wheels Up To Start Week For Travel Stocks

One thing people may be getting more excited about regarding the U.S. economy is domestic travel starting to tick up a bit. Headlines about TSA travel checkpoint numbers reaching a post-COVID high of more than 831,000 passengers Sunday might be why shares of BA and some of the airlines got a nice lift Monday. Last month, average daily levels had been around 700,000, so it seems like we’re starting to make our way back a little.

Just anecdotally, on a flight this weekend the safety protocols of masks for everyone and new procedures on passenger drink orders seemed to be running smoothly. People sat in the middle seats, and the plane was 75% to 80% full. However, some airport restaurants remained closed.

It’s great to see people out there traveling. However, as an investor, you need to be careful about the “reopening” play.

This is normally the peak of the summer travel season. What will happen in September and October when the kids are back in school (sort of) and businesses continue to be reluctant to send employees on their usual jaunts around the country? People overlook how reliant the airline industry is on business travel.

Leisure, not business, is the type of travel that drives the cruise industry, obviously. Royal Caribbean Cruises Ltd (NYSE: RCL) has had a really rough year, to say the least. Its forecast for better demand in 2021 helped its shares cruise to double-digit gains Monday.

Again, to say cruise stocks are volatile isn’t really too debatable by any stretch of the imagination. They do appear to have been pretty popular with some of the millennial investors, and those are the people who seem—judging from media reports—most likely to want to get back on a cruise when they have a chance. However, they’re not usually the generation with the most money to spend on vacations, so their potential impact on that industry needs to be seen in context.

CHART OF THE DAY: SMALL BUT STRONG: The Russell 2000 Index (RUT—candlestick) has pulled away from the S&P 500 Index (SPX—purple line) over the past month as it appears “value” stocks are getting a fresh look from many investors. Data sources: FTSE Russell, S&P Dow Jones Indices. Chart source: The thinkorswim® platform from TD Ameritrade. For illustrative purposes only. Past performance does not guarantee future results.

Jobs Data Show Reopening Link: Last week’s jobs report might make the market more sensitive to reopening headlines in the coming weeks. Why? Because if you delve into the data, the gains were consistent with what was allowed by the reopenings. Restaurants have been able to open to a certain extent. Stores have reopened quite a bit. Hospitals can do elective procedures. Even hotels are seeing higher occupancies, something Marriott International Inc (NASDAQ: MAR) confirmed in its earnings report Monday. All of those factors are where the July job gains came from, and it’s encouraging that as we reopen we see this kind of immediate response in the labor market.

The caveat is that it could make the stock market more sensitive to reopening headlines going forward, including negative ones. The data showed we’re going in the right direction, and it made the COVID headlines more important because now it establishes a direct linkage between jobs and stay at home orders, restrictions, and new shutdowns or reopenings.

Retail Rebound: Travel stocks weren’t the only ones off to a good start this week. The retail sector also found some traction thanks in part to Foot Locker, Inc. (NYSE: FL) announcing a big gain in same-store sales and saying they expect better than expected Q2 earnings. Shares rose nearly 8% Monday, and that might have helped other brick-and-mortar stocks, too. Shares of Nike and Under Armour (NYSE: UAA) each posted 3.5% gains.

People tended to write off brick-and-mortar retailers even before the pandemic. Still, consumers might have gotten some cabin fever during the shutdown and now want to head back out if possible. This could help department stores, mall-based businesses, and big-box retailers if the reopening pace continues.

That said, one of the strongest upward moves on Monday came from FedEx (NYSE: FDX), whose business could benefit if people just stay home and order stuff. When delivery businesses do well, that tends to say good things about the economy. The question is whether consumers will spend at brick-and-mortar stores or online if there’s no follow-up stimulus from Washington. Lack of that could hurt both the FDX’s and FL’s of the world.

Pay the Price: Though maybe it’s not up there with retail sales, today’s producer price and tomorrow’s consumer price index (PPI and CPI) data could be helpful in judging whether the Fed has a smooth runway to keep the wheels up on its stimulus. A surge in consumer prices tomorrow might have some investors wondering if the Fed might want to slow down or at least hold off on further stimulus. On the other hand, weak inflation might cheer the market because it could send the signal that the Fed has more blue sky above it.

Analysts are looking for benign CPI data tomorrow in the realm of 0.3% for the headline and 0.2% for core, which strips out food and energy, Briefing.com said. Anything significantly above that might get investors a bit nervous. The July PPI came in higher than expected today at 0.6%, up from negative 0.2% in June.

Photo by Capturing the human heart. on Unsplash

© 2020 Benzinga.com. Benzinga does not provide investment advice. All rights reserved.

The CDC Is Warning People Not to Wear This Common Mask

Tue Aug 11 , 2020
Photo credit: galitskaya – Getty Images From Men’s Health There’s controversy about mandated face masks and the best types of coverings, but there’s no debating that masks can reduce the spread of the novel coronavirus. A person infected with COVID-19 spreads virus via tiny droplets when they cough, sneeze, or […] 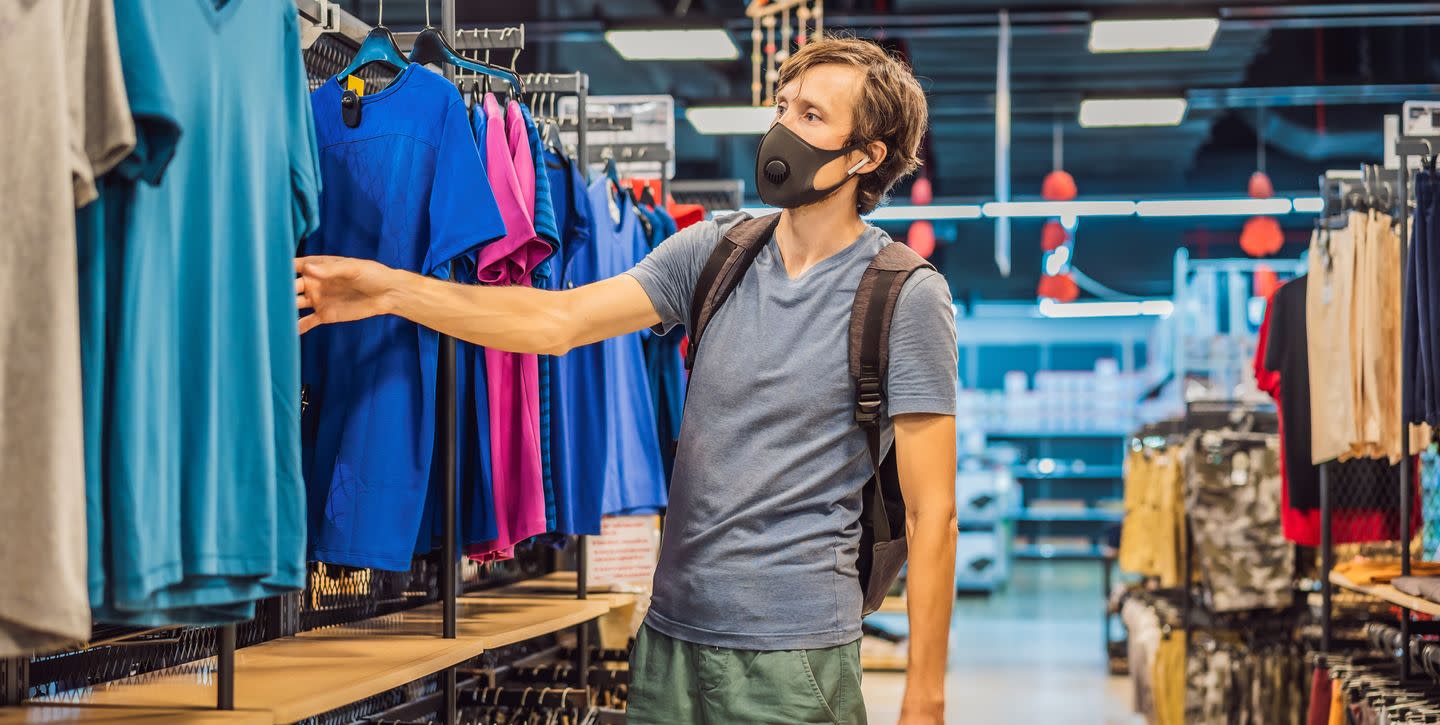