America is emerging from the 2020 presidential election close to a social breaking point. While we occupy the same physical terrain, the countries Joe Biden and Donald Trump supporters imagine and see online have never been further apart.

As Biden looks to rebuild America’s infrastructure and bring the country back together, he should consider a visionary project that could do both: the reinvention of the digital public squares currently hosted in private platforms like Facebook and Twitter.

The story of how the internet has become so broken is already familiar. More and more of our public life takes place on big tech platforms optimized for clicks, shares, and virality. The result is that we spend our online time largely in rule-less spaces that reward our worst impulses, trap us in bubbles of like-minded opinion, and leave us susceptible to harassment, lies and misinformation. Facebook, Twitter, and YouTube each took first steps to rein in the worst behavior on their platforms in the heat of the election, but none have confronted how their spaces were structured to become ideal venues for outrage and incitement.

Both Democrats and Republicans increasingly distrust Big Tech, and there’s a likelihood of both regulation and antitrust actions under the new administration. Some conservatives, angered by what they see as the biased application of new rules around misinformation, are even trying to boycott mainstream platforms in favor of hyper-partisan spaces like Parler and Gab. But neither party is talking seriously about the deeper problem: how can we change our digital spaces so that they bring us together instead of tear us apart?

The first step in the process is realizing that the problems we’re experiencing in digital life — how to gather strangers together in public in ways that make it so people generally behave themselves — aren’t new. They’re problems that physical communities have wrestled with for centuries. In physical communities, businesses play a critical role — but so do public libraries, schools, parks and roads. These spaces are often the groundwork that private industry builds itself around: Schools teach and train the next generation of workers; new public parks and plazas often spur private real estate development; businesses transport goods on publicly funded roads; and so on. Public spaces and private industry work symbiotically, if sometimes imperfectly.

Beyond their instrumental value for prosperity, we need public spaces and institutions to weave and maintain our social fabric. In physical communities, parks and libraries aren’t just places for exercise or book-borrowing — they also create social connections, a sense of community identity, and a venue in which differences and inequalities can be surfaced and addressed. Public spaces provide access to essential resources for people who couldn’t otherwise access them — whether it’s an outdoor workout station, basketball court, or books in a library — but they are some of the few spaces in a community where we get a glimpse of each other’s lives and help us see ourselves as part of a pluralistic but cohesive society.

These kinds of public spaces mostly don’t exist online. Twitter, Facebook, YouTube, and Twitch each offer some aspects of these experiences. But ultimately, they’re all organized around the need for growth and revenue — incentives which are in tension with the critical community functions these institutions also serve, and with the heavy staffing models they require. A library organized around growth and revenue would be… well, Amazon.

Platform apologists often argue that polarization and bad behavior on social platforms is an inevitable result of human nature — our animal spirits, our narcissism, our need to be right. This is a bit like saying noise and fights at bars exist because of human nature: It’s true to an extent, but the function, design and norms of the space — not to mention the alcohol — sure help. Recent peer-reviewed research from three professors at the University of Virginia demonstrates how dramatically the design of platforms can affect how people behave on them. In their study, in months where conservative-leaning users visited Facebook more, they saw much more ideological content than normal, whereas in months where they visited Reddit more they “read news that was 50 percent more moderate than what they typically read.” (This effect was smaller but similar for political liberals). Same people, different platforms, and dramatically different news diets as a result.

This is why a growing group of scholars and technologists have started looking at new ways of supporting flourishing online public life by focusing on parks and libraries for the Internet — what scholar Ethan Zuckerman calls “digital public infrastructure.”

Wikipedia is probably the best-known example of this kind of institution — a non-profit, mission-driven piece of digital infrastructure. The non-profit Internet Archive, which bills itself as a free “digital library,” a repository of books, movies and music and over 500 billion archived web pages to create a living history of the Internet, is another. But what we need are not just information services with a mission-driven agenda, but spaces where people can talk, share and relate without those relationships being distorted and shaped by profit-seeking incentive structures.

We are just beginning to see glimpses of what these spaces might look like. One model is Vermont’s Front Porch Forum. Front Porch Forum is essentially a heavily moderated local email list for community discussions that’s been slowly and carefully developed over the last 20 years. Users can only post once a day, every post is read by a moderating team, and if you’re too salty or run afoul of other norms, you’re encouraged to rewrite. This is terrible for short-term engagement — flame wars drive attention and use, after all — and as a business model, all those moderators are costly. But there’s a long-term payoff: two-thirds of Vermont households are on the Forum, and many Vermonters find it a valuable place for thoughtful public discussions.

As local journalism reinvents itself as a nonprofit endeavor, some of its new entrepreneurs are considering how to replicate not just investigative articles but a platform for the type of curated, thoughtful community dialogue that letters to the editor pages used to provide. In the Netherlands, a coalition of public broadcasters, filmmakers, and the Dutch arm of Wikimedia are embarking on an ambitious project to build open-source technology to facilitate community dialogue and discussion in a publicly governed model. Libraries around the world, shuttered by the pandemic, are also considering how to replicate the community services they have provided in virtual space.

Built into the premise of this work is the notion that what’s needed is not one publicly owned Facebook clone, but an armada of localized, community-specific, public-serving institutions that can serve the functions in digital space that community institutions have served for centuries in physical places. Vermont’s Front Porch Forum and other examples show this is possible, even in the digital age.

Of course, for spaces to truly serve the public, they need to be governed by the public in some sense. Structurally, the starting point for this could be similar to libraries, park associations, and other public-facing nonprofits that receive some state funding. But as these projects grow, they might begin to engage the participants in their governance, as Wikipedia does with its editors. In fact, public digital infrastructures might be the right place to start exploring how to reinvent governance and civil society more broadly.

This naturally raises the question of whether such spaces might end up as yet another site for America’s culture wars. But bringing people together doesn’t necessarily mean frontloading the politics — or even making it a major part of what these spaces might offer. There’s a reason that in the physical world, spaces where large numbers of people deliberately engage in direct political argument — say, town hall meetings — are a very small percentage of total civic space. A lot of what people do in public space is engage in recreation and sports, access services, and learn to peacefully co-exist with their neighbors despite whatever differences they might have. This creates a basis of familiarity and shared identity on which more complex and difficult discussions can be built.

If mission, design and governance are important ingredients, the final component is what might be called digital essential workers — professionals like librarians whose job is to manage, steward, and care for the people in these spaces. This care work is one of the pillars of successful physical communities which has been abstracted away by the existing tech platforms. Scholar Joan Donovan has called for 10,000 librarians for the Internet, while Sarah R. Roberts has pointed out that doing curation at scale would be impossible within the current social media business model. At a time when our country is pulling apart and many Americans need work, it’s worth considering whether we need an AmeriCorps for digital space.

How might we pay for this? A two-year project one of us helped lead at the American Academy of Arts and Sciences issued a final report that recommended taxing what’s known as “targeted advertising” — the kind Google and Facebook rely on for their revenue — in order to support the democratic functions social platforms have had a hand in dismantling, like local journalism. The truth is that Facebook, Google, and Twitter have displaced and sucked the revenue out of an entire ecosystem of local journalistic enterprises and other institutions that served some of these public functions. Those three companies alone made nearly $33 billion in profits in the third quarter of 2020 alone — and that profit margin in part comes from not having to pay for the negative externalities they create or the public goods they erode. Using some of those funds to support public digital infrastructure seems eminently reasonable.

Alternatively, a recent proposal from Todd Davies and John Gastil uses the Corporation for Public Broadcasting as a funding model for creating a reliable funding source. Similarly, the federal government could create a publicly funded nonprofit corporation to manage and maintain in the public’s interest in digital life.

Building an information architecture and digital infrastructure to bring us back together is an Apollo mission for the 21st century. It will take time, willpower and some real investment, but it can also create jobs and opportunities that will catapult forward our increasingly digital economy. If he accepts the challenge, Joe Biden could be remembered for creating and protecting the digital public space the way Teddy Roosevelt is remembered for establishing and preserving our National Parks — as a champion of a vital public resource for generations to come.

Tue Jan 5 , 2021
Whether it’s a dinner date or a catch up with friends over a video call, these are the wines you can get delivered to your doorstep (Getty) Whether you’re pairing a bottle with a nice dinner after working all day from a makeshift home office, or enjoying a drink over […] 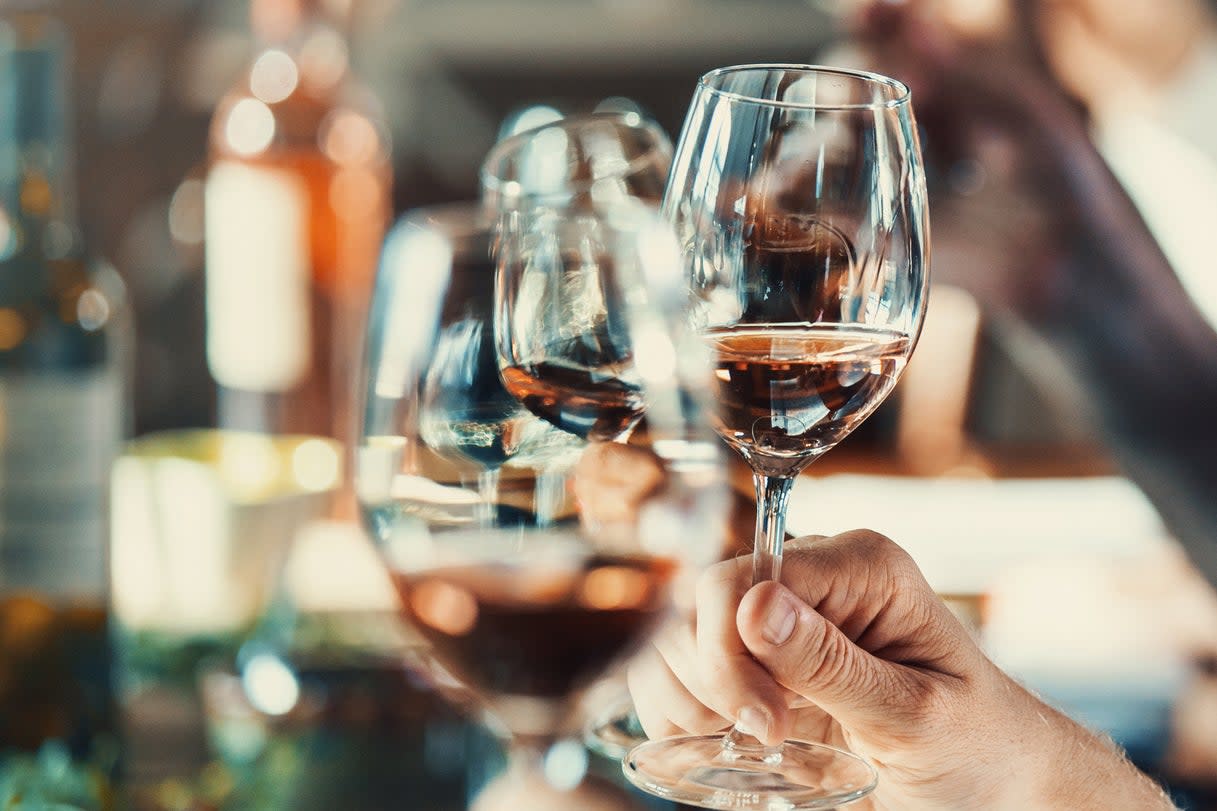