Early last week, as wildfires approached her neighborhood in Rogue Valley, Ore., Virginia Camberos evacuated her home. After a brief stay at her son’s residence, about an hour’s drive up the mountains, authorities gave the all-clear to return two days later. “I’m fortunate I have a home to come back to,” says Camberos, a regional director for Unite Oregon, a non-profit serving the valley’s mostly-Latino community. “Two blocks down, everything is just burned to the ground.”

Camberos and her neighbors are not alone. Sweeping wildfires in Oregon and California have burned through millions of acres of land in recent weeks—resulting in mass evacuations, a few dozen deaths and the destruction of hundreds of homes. Ten active wildfires in Oregon continue to burn and have already torn through more than 976,000 acres. About 20 active wildfires in California are burning through more than 2.3 million acres of land. This year’s fire season, according to Cal Fire, resulted in 26 times the number of acres burned over the same period in 2019.

But amidst the devastation, national politics loom. Less than six weeks before the general election, non-profits and advocacy groups that help communities access voting, including Cambero’s, face an outsized challenge. With at least 500,000 Oregonians under some sort of evacuation notice and upwards of 400,000 Californians living in areas under a mandatory evacuation order at some point during this year’s fire season, it’s unclear whether many of these residents will end up casting a ballot. Although both states offer flexible voting options for in-person and mail-in voting, many face significant logistical and emotional challenges.

“Right now, we’re in a daze,” Camberos says. “People are not even thinking about (voting) right now because of what we’ve been through.”

Camberos is working on changing that. She believes that the Latino and other minority communities, which have faced discrimination by the Trump Administration, have a duty to vote for the government they want. Even if that means prioritizing voting when their worlds are literally on fire. “I have to figure out, how do I still relay that message to my community,” she says, “without sounding like I don’t give a crap about them and what they’re going through?”

The answer, so far, is a combination of disaster aid and gentle voter education, Camberos says. She and her team are checking in on community members affected by the fires and planning to hand out emergency $200 Visa gift cards to those in need. But Camberos says she’s also beginning to broach the topic of the November election, helping those eligible to vote access the necessary information. Those conversations, she says, require a balancing act: “Just wanted to check in on you again and hey, by the way, did you already register to vote?”

Unite Oregon has also posted flyers in English and Spanish to help community members navigate how to get their ballots if they were displaced by wildfires, Camberos says.

California and Oregon state election laws are flexible, and both states have issued specific guidance for voters displaced because of wildfires. Oregon’s deadline to register to vote or update voter registration is Oct. 13. Displaced voters can also cast a provisional ballot in any Oregon county election office, even if it’s not their own. California, which has same-day voter registration, also allows voters in some counties to cast ballots at any county voting center. In other counties, voters are assigned a specific location, but if they show up at the wrong one, they can still cast a provisional ballot.

Those who wish to vote by mail in both California and Oregon have flexible options, too. In both states, voters can simply update their mailing address online—even if it’s a temporary switch—and then receive a ballot in the mail. (Here’s where you do it in Oregon, and here’s where you do it in California.) Temporary addresses can be homeless shelters or an advocacy organization. Californians and Oregonians aren’t required to re-register to vote if they change their address.

Displaced Californians who’ve forgotten to prepare for the election can register and cast a ballot in-person on Election Day. Californians can also opt for a slightly more complicated remote voting process that will allow them to print out their own ballot and choose to drop off a completed vote-by-mail ballot to any voting location or elections office.

“For now, the tools are already in place for people who want to vote to be able to vote,” says Julia Gomez, an attorney with ACLU of Southern California. “In terms of voting by mail, it’s just an issue of refocusing voter education to let them know what their options are.”

USPS will not mail ballots to a forwarding address, so displaced people must notify officials directly about any change in address if they intend to vote by mail. But in Oregon, the U.S. Postal Service will hold onto any ballots that were intended to be directed to mailboxes that have been destroyed by the fires; displaced residents can collect them from their local post office. (California law does not specify how the Postal Service should handle ballots addressed to mailboxes that have been destroyed, according to the office of California’s Secretary of State.) The state’s official guidance notes that USPS should “put out public service announcements and Service Alerts letting the public know where they can go and pick up their mail” if regular delivery is disrupted.

“We’ve had elections in wartime, in peacetime, during pandemics, during recessions throughout this country’s history,” says Sam Mahood, a spokesperson for California’s Secretary of State. “Our democracy is resilient. But it’s also why it’s important to have flexibility and options for voters,” particularly in a time of crisis.

State Sen. Anna Caballero, a Democrat who represents Salinas, a rural, agricultural district in Monterey County that is home to a sizeable low-income Latino community, says the problem is not complicated state election laws that prevent people from voting; it’s that voters themselves, who are enduring difficult and traumatic period, may not prioritize the election. “The problem is, quite frankly, when you’ve lost everything—I gotta think the last thing you’re thinking about is voting,” Caballero says. “We need to get the message out so voters know they have lots of options.”

Kate Titus, executive director of Common Cause Oregon, says another problem is just the uncertainty of the period. Someone whose home has just burned down doesn’t necessarily know they will be living more than five weeks from now. “A lot of people in this chaotic situation aren’t sure yet where they will be on Election Day,” she says. (Common Cause supports the voter registration deadline being moved to as close as election day so people can re register new addresses as needed.)

Navigating even basic rules can be daunting for people who speak or read other languages, says Kayse Jama, executive director of Unite Oregon. “The things that you and I take for granted—like calling the elections office to get the right information about how this process works for a displaced person—it’s a tall order for someone who doesn’t speak English,” he says.

In Santa Cruz, Calif., County Clerk Gail Pellerin has been hosting biweekly Zoom sessions to inform voters about their options. Her recent sessions have included information on voting for fire evacuees and one was held in Spanish. Santa Cruz will also soon have its own mobile voting unit, thanks to money allocated under the federal CARES Act, which passed Congress in March. The mobile voting unit—a trailer that hooks up to a truck, decorated in a patriotic red, white, and blue—will travel around the county, including to shelters and areas devastated by wildfires, helping people to register, vote, and access replacement ballots.

“We’re going to be going anywhere needed in the county to make sure people have access,” Pellerin says. “We can take it to pretty much any parking lot and set it up. It’s a full service stop.”

A lot of the time, she says, what voters need isn’t complicated. She recalls receiving a phone call from a California resident who went to a vacation home in New Mexico after their house burned down. The resident asked how they could still vote. “I said, ‘Piece of cake, I’m going to mail your ballot to New Mexico. What’s the address?’ Boom, done.”

“Our hearts go out to people. They have lost so much but they will not lose their right to vote,” Pellerin says.

It’s a sentiment that resonates with Amy Osterberg, a teacher at Pine Ridge Elementary School in Auberry, Calif. Among students and staff at her school, 18 families—including her own—have lost their homes, she says. “There’s nothing left of my house or any of our out-buildings but my chicken coup stands with four chickens still alive,” Osterberg says, adding, “Our whole little community, the whole ridge that we live on has been wiped out.”

Losing a home is not just about losing the material possessions, Osterberg says. It’s emotionally wrought. “You can get new stuff and put new stuff into a home,” she says, beginning to cry, but you can’t replace the memories. “The stuff from when [my children] were little. I saved all their art projects or everything with their handprint on it.”

Still, Osterberg plans to vote, in-person, this year. “As these politicians are coming here to get their pictures taken, we want to know: how are you going to help and make sure this is not going to happen to anyone else,” Osterberg says. “These are questions that are absolutely on our minds. How can you help us come back from this? We’re going to be looking for leaders who can possibly do that.”

Ramon Lopez Ruelas, 35, a correctional officer at a prison in Soledad, was battling wildfires in California as a volunteer last month when he learned that the Carmel fire—one of dozens of wildfires ravaging the state—had destroyed his own family’s 15-acre ranch house. He and his wife had saved to buy the home, and dreamed of raising their three kids under the stars and around horses, goats and sheeps. “That house meant the world to us,” he says.

A GoFundMe fundraiser for Ruelas’s family has raised more than $51,000, but he and his wife are still processing the loss—and the election seems far away. Ruelas says he is already registered and hopes to vote. But like thousands of his fellow Americans whose lives have been overturned this fire season, he’s not yet sure how he’ll pull it off.

Fri Sep 25 , 2020
Back in April, when sourdough starters and watercolors ate up our Instagram feeds, and the most fortunate of us still felt like we were killing a few weeks at home, hobbies were a way to fill time. Seemingly everyone bought dried beans and guitars. Anyone with a needle and thread […] 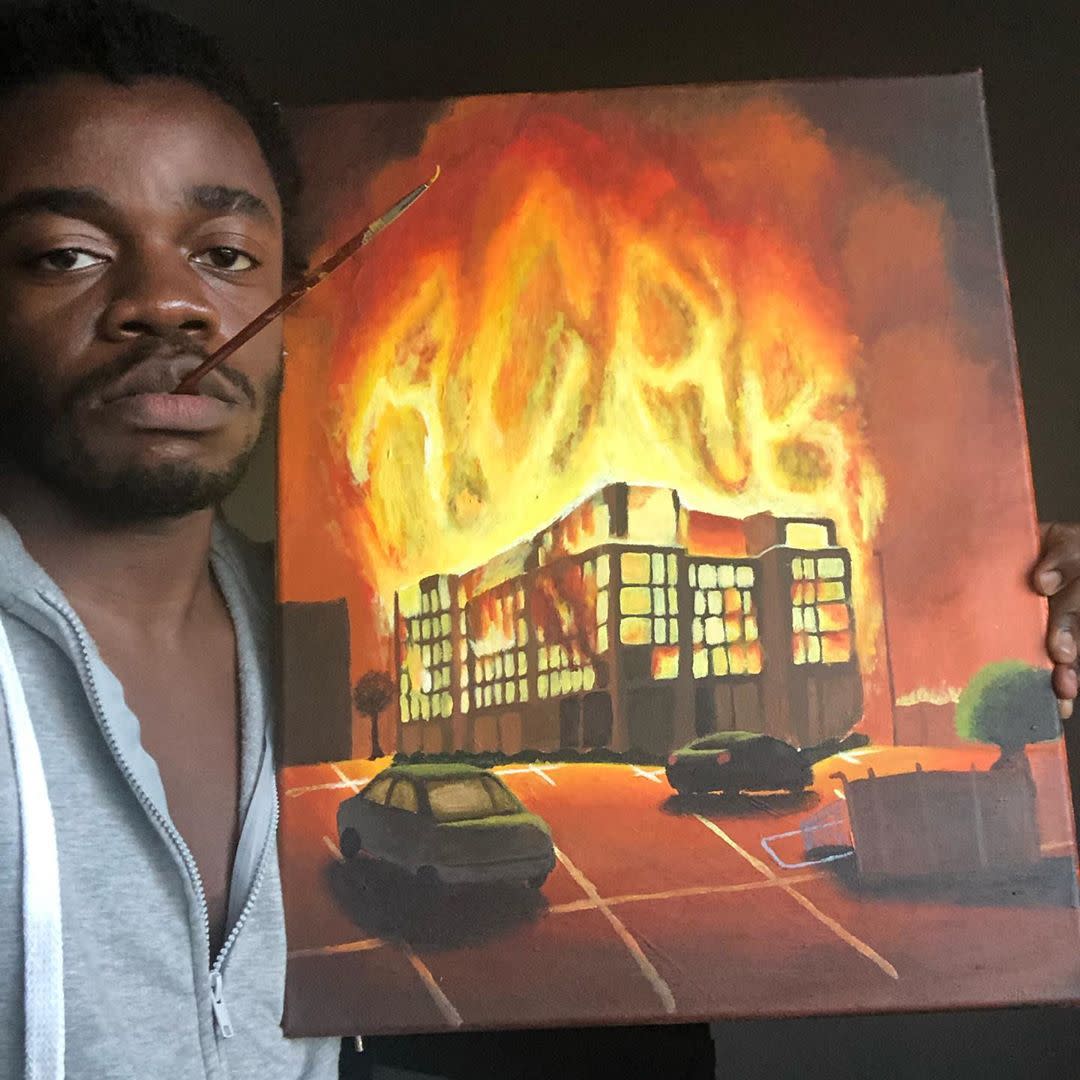