When it comes to surviving the pandemic, sugary sweets appear to be an elixir for some businesses as folks looking for comfort buy candy, cookies and cakes in greater numbers.

Which is why sales of candy grew by 3.8%  from March through August when compared to the same period in 2019. Chocolate sales are up 5.5% and sales of premium chocolate bars rose 12.5%, according to the National Confectioners Association.

Some who sell the sweet stuff are benefitting. Folks like Walid Dimo, who owns Dimo’s Deli & Donuts, a destination spot on Ann Arbor’s west side, said his  business has been doing “pretty good” during this difficult year.

With a commanding voice, Dimo can be found manning the register and taking orders over the phone as he directs traffic in the small shop like the conductor of a symphony — only the end game of this process is the sweet taste of unbelievable apple fritters or donut twists.

Dimo knows patrons on a first name basis — many University of Michigan athletes (past and present) whose autographed pictures adorn the walls of his business. The lines of people (now socially distanced and wearing masks) are a tad shorter, but consistent. His wife, Mary Dimo, a pharmacist, has been advising him on safety protocols for employees and customers.

More: Here’s what has to happen inside your business after the election

“I put my heart and soul in this business,” Walid Dimo said. He’s worked there since he was 13. His parents — who emigrated from Palestine — took over the spot on Stadium Boulevard in 1972,  and put the family name on the company. It’s the only place he’s ever worked.

As  with many business owners, he spends 13 to 14 hours a day, six days a week there (they are closed Sundays, will be closed Thanksgiving weekend and three weeks over the Christmas holiday).

When I asked about the impact of the pandemic, he said he experienced a drop off in business customers and loss of sales on football Saturdays as the 100,000-plus fans were no longer coming in for games at the Big House or going to tailgate parties.

His staff is also down to eight from its 11 pre-pandemic. “Some went on unemployment and didn’t come back,” he explained. 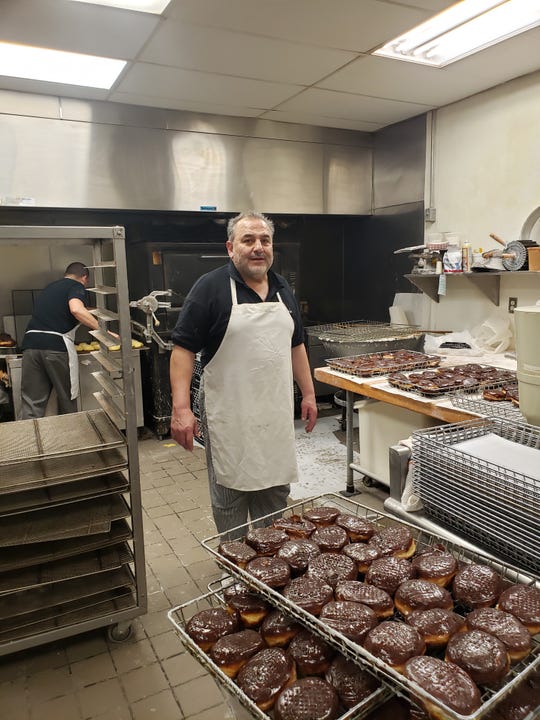 “We’ve lost business customers as everyone is working from home so there’s no need to buy a lot of donuts,” he said. “But we’ve gained new customers — people with cabin fever who go out and stop by and buy a few donuts.”

Loss of football Saturdays has been his biggest hit. “We’re down 15-20% with no fans.”

Though times aren’t easy, Dimo said he’s still seen worse and mentioned the economic collapse of 2008-09 and fallout of the 9/11 attacks.

He remains optimistic things will improve in 2021.

“We’ll continue to do what we do,” he said. “We’ll come to work, we’ll make so many pounds of donuts and breads and things. We’ll sell them, and if there’s anything left at the end of the day we donate them to churches and police departments.”

For Kevin Gudejko, co-owner of Mainstreet Ventures, which includes 16 restaurants including The Chop House, Palio and Real Seafood, this crisis has meant pivoting over and over again.

The latest statewide order closing inside dining for restaurants and bars for three weeks was another sucker punch.

“We were hanging tough, and now we’re having to get off the mat — again,” he said. He had improvised by offering more carryout dinners and dabbling with Chef Experience, a four-course gourmet dinner from the Chop House where meals are assembled with everything needed. You take it home and cook with the finesse of Julia Child.

With inside dining shut down again, he put a pause on the Chef Experience and is offering carryout “family style meals.” He just introduced “Cozy Box” for the holiday season — a box that includes a logo blanket, eight cocktails and a $75 gift card at the Chop House for $150. 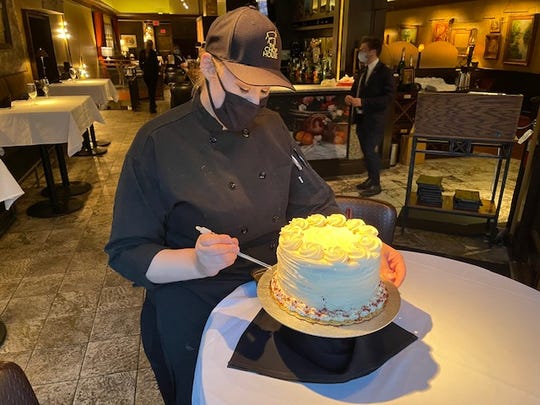 Ashley Harger is the pastry chef at The Chop House in Ann Arbor, which has seen uptick in sales of cakes, pies during this pandemic. (Photo: Xander Gudejko)

He’s noticed a surge in their dessert sales in recent months, especially at the Chop House.

“We’re ramping up right now on our holiday cakes and desserts,” to keep up, he added.

Times have been tough at the Townsend Hotel in Birmingham, which has been adjusting to changing circumstances and evolving safety protocols.

“The year has been a disaster, especially with hotels, restaurants and bar business,” said Steven Kalczynski, managing director of the five-star hotel. “Everyone is suffering because of the mandated policies in place to shut down everything rather than to be selective based on actual numbers of COVID cases. If the mandated polices did not work in the spring, what will make them work now?”

The hotel has remained opened but business sparse with little business travel and cancellations of weddings and other events. Still, in a nod to its customers, the hotel just installed a new UV air purification system in  its Rugby Grille Restaurant, the Gallery, ballrooms and public lobby areas to destroy airborne viruses and bacteria. 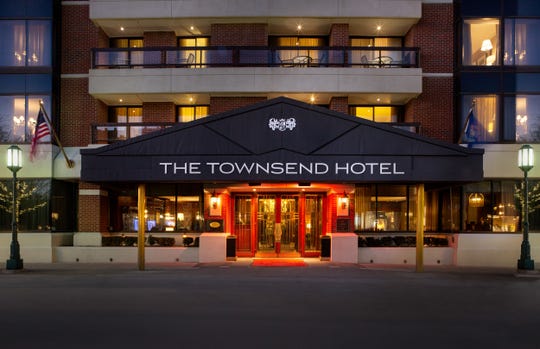 The Townsend Hotel in Birmingham, Michigan. (Photo: he Townsend.)

When things closed in March, the Townsend Bakery also closed for a time and adjusted as it went to an online order format. That turned out to be fortuitous as their bakery sales have been heating up for months.

“We’ve seen dramatic increase in to-go orders for our dessert offerings, especially celebration cakes of various types, i.e. birthdays, anniversaries and baby showers,” he said, adding it has been one of their bright spots during this crisis.