Ted Cruz, the Republican senator from Texas, has found himself in the middle of a number of controversies. There was the 2013 government shutdown, wherein Cruz hijacked Congress with a reading of Dr. Seuss’ Green Eggs and Ham; the time he accused President Obama of high treason for wanting to push immigration reform; the time GOP Senator Lindsey Graham said, “If you killed Ted Cruz on the floor of the Senate, and the trial was in the Senate, nobody would convict you”; and the time Donald Trump branded Cruz’s wife ugly and accused his father of assassinating JFK, prompting Cruz to cower and kiss his ring anyway. Recently, the culture war-obsessed congressman has come under fire for his complicity in the Jan. 6 storming of the Capitol, and abandoning his state for a Cancun vacation in the midst of an energy crisis that left millions without power and dozens dead.

Instead of capitalizing on the moment, Chase turned down a number of interviews, choosing to let the bizarre episode speak for itself.

“I wasn’t doing a whole lot of press back then, and really, what can I say about it?” she says. “I’m definitely surprised that it happened, but how it happened and why it happened, I have no clue. It is very weird that someone like him would like something like that.”

When I ask her why, she replies, “He’s said anti-porn stuff and is even anti-masturbation devices and toys—everything of that nature. Since then, I think he’s become a little more relaxed about all that stuff.”

Another reason that Chase didn’t capitalize on the moment in the media: she was stuck in the aftermath of Hurricane Irma, which had just ravaged her home state of Florida. Once she was able to charge her phone, she opened her Twitter to find a warning telling her to adjust her settings because she’d received too many mentions. She’d also received hundreds of missed calls, voicemails, and emails from reporters requesting comment.

Having lived in South Florida for decades, and weathered a number of hurricanes and tropical storms, Chase was baffled when Cruz took it upon himself to bail on his home state of Texas during the recent power crisis for a Cancun getaway.

“Oh my god,” she utters at the mere mention of the episode. “It’s not great… Maybe he should have sent his family away and he stayed behind to deal with stuff.” So, since Cruz appears to be a fan of her work, is she a fan of Cruz?

“No, I’m not a fan,” replies Chase, shaking her head over Zoom, adding, “And that’s why I live in Florida and not in Texas.”

“We were a show of force, watching the TSA to make sure they were doing their jobs,” she explains. “I was deployed for airport duties after Sept. 11, and we were set to go to Iraq in ’03 but ended up not going overseas because [the Iraqis] didn’t have any planes or missiles for us to shoot down.”

Two years ago, Chase suffered a health scare that could have put an abrupt end to her sex-having career.

“Just after the AVNs, I suffered a pulmonary embolism,” she remembers. “It was a little scary. I was fine… and almost dead at the same time. I was having some pains and thought it was my gall bladder or some other issue, so I went to my doctor and he said he heard something funny. I went in for an MRI and they picked it up.”

Chase took a gradual approach to reentering porn—producing her own content so that she could control “how hard, how rough, and what I was actually shooting,” posting the material to her website and OnlyFans. And then COVID happened, causing adult studio work to grind to a screeching halt.

“I just hope to get back to shooting with other production companies,” says Chase. “But I’m hoping these girls, men, and everything in between that are in the industry now and coming up with OnlyFans don’t have to rely on other people to make money and can keep making their own money. I came up in the early years when we didn’t have the platforms to do this stuff.”

“Well, my aspiration is to, oh I don’t know, be in a teen tit film,” he replied. “Other than that, I don’t know… Take over the world. World domination. Rule everything. Rich, powerful, that sort of stuff.”

Sat Mar 6 , 2021
In the noughties, I adored Sex And The City. Like women everywhere, my friends and I debated which of these four impossibly stylish, successful women we were – when the reality was a bunch of university freshers who drank Buckfast from the bottle and lived in hoodies. We probably had […] 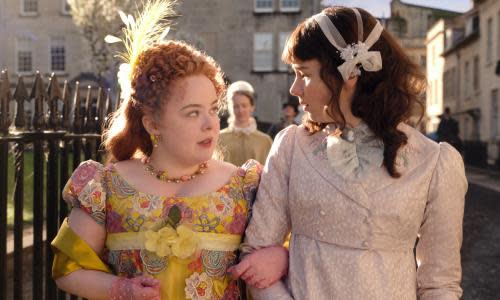