Sen. Ted Cruz (R-TX) has offered a stunning explanation for flying out to Cancun on Wednesday night as his home state literally froze to death: I was being a “good dad.”

“With school canceled for the week, our girls asked to take a trip with friends,” he said in a statement issued on Thursday afternoon. “Wanting to be a good dad, I flew down with them last night and am flying back this afternoon.”

“My staff and I are in constant communication with state and local leaders to get to the bottom of what happened in Texas,” he continued. “We want our power back, our water on, and our homes warm. My team and I will continue to use all our resources to keep Texans informed and safe.”

Cruz acknowledged it had been an “infuriating week” for millions of Texans who were without power, or dangerously close to running out of food and water. But he seemed to suggest he’d always planned to return home after one night, contrary to reports he was intending to stay in vacay hotspot with his wife, Heidi, and two daughters until Saturday.

According to a United Airline source who spoke to travel publication Skift, Cruz rebooked his flight back to Houston on Thursday morning, cutting his vacation two days short. A spokesperson for the airline declined to confirm it to The Daily Beast, saying: “We do not share customer information or booking data.”

The senator’s fellow travelers seemed to out his insanely tone-deaf trip on Wednesday night by posting snaps of him inside an airport and then, later, on a plane. An unnamed Republican appeared to put an end to rampant online speculation Thursday morning, telling Fox News that the allegations are true and the photos “speak for themselves.”

In the photos, Heidi Cruz is visible alongside her husband, raising questions about the senator’s explanation that he needed to escort their daughters, aged 10 and 13.

Cruz’s flight came during an ongoing catastrophe in his home state—freezing weather has caused days of mass power failures, which, in turn, has caused widespread food shortages and water outages. At least 1o people have died and millions have been left cold and in the dark. In his final tweet before the flight, Cruz wrote: “A blizzard strikes Texas & our state shuts down. Not good.”

Cruz’s staff even called the Houston Police Department—which has been busy dealing with the deadly storm—on Wednesday afternoon to ask them to assist Cruz when he arrived at George Bush Intercontinental Airport.

“His staff requested assistance upon the Senator’s arrival at the airport. Upon his arrival at the terminal, we monitored his movement,” the department said in a statement. A spokesperson wouldn’t say how many officers were called in to help Cruz, or how long they stayed with him, but said they were “just around.”

As Cruz’s office stayed silent for hours, the senator’s opponents leapt on the blunder. Beto O’Rourke, the former Texas congressman who lost to Cruz in 2018, has been busy calling senior citizens to make sure they’re surviving the deep freeze. He told MSNBC that his rival “is vacationing in Cancun right now when people are literally freezing to death in the state that he was elected to represent and serve.”

Texas Rep. Gene Wu, a Democrat, posted one of the many photos of Cruz. He followed it with a tweet that said, “I have so many expletives.”

Cruz’s decision to leave home for the sunny shores of Cancun came just two days after he told his constituents to do the opposite.

“I was speaking this weekend with the meteorologist expert who was saying the combination of these two storms, we could see up to 100 people lose their lives this week in Texas. So don’t risk it. Keep your family safe and just stay home and hug your kids,” Cruz said on the “Joe Pags Show” on Feb. 15.

But Cruz had no problem slamming Democrats for the same behavior back in December. After Austin Mayor Steve Adler took a trip to Cabo while simultaneously telling residents to stay home to minimize the spread of COVID-19, Cruz was one of the most vocal critics.

“Hypocrites. Complete and utter hypocrites. And don’t forget @MayorAdler who took a private jet with eight people to Cabo and WHILE IN CABO recorded a video telling Austinites to ‘stay home if you can…this is not the time to relax,’” he wrote in a Dec. 2 tweet.

“I do not believe Mayor Turner has had time to slow down and read the story about Sen. Ted Cruz flying to Cancun,’” Mary Benton, Turner’s director of communications, told The Daily Beast.

Residents in the Lone Star state were left seething. Akilah Scott-Amos, a 43-year-old small business owner who lives near Houston, told The Daily Beast: “Texas should have went Blue. Cruz is enjoying a vacation in Mexico, amongst the people who he probably doesn’t care for anyway, while Beto is out trying to solve problems!”

Another resident, who wished to remain anonymous for fear of retribution, said that he was “not surprised” but “disappointed.”

“I feel like he just continuously lets us down,” the Forth Worth resident said.

How to Find Budget Accommodations on a Road Trip

Thu Feb 18 , 2021
Road trips continue to gain in popularity as Americans look for safe ways to travel during the pandemic; in fact, in a recent survey, 67 percent of respondents say they plan to travel by car on their next vacation. In addition to avoiding germs on an airplane, another perk of […] 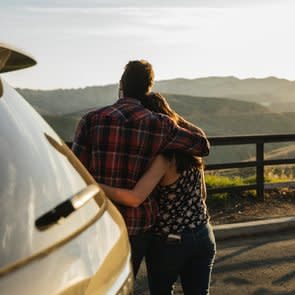