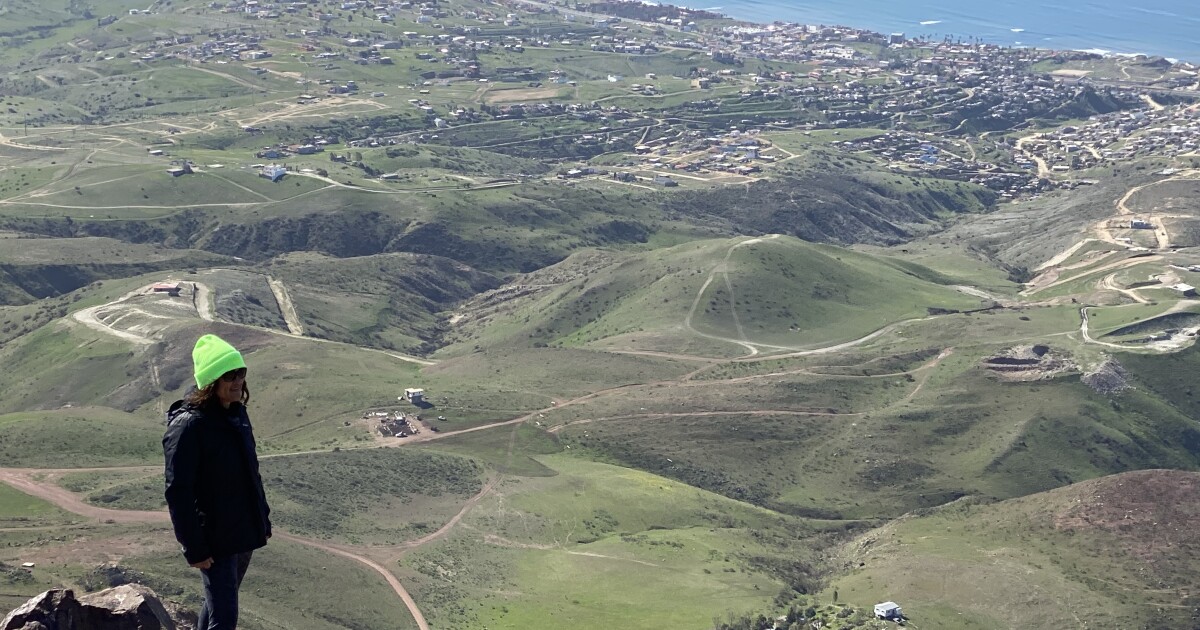 Laid off from her job as a dialysis tech during the pandemic, Mexicali resident Beatriz Ojeda felt like she could not take another day alone in her home.

“I’ve been struggling to get out of bed,” said Ojeda, 45. She’s been depressed, “to the point that I never would have thought I could get like this — because before the pandemic I had always been so happy.”

So when a friend invited her to take a hike, Ojeda took her up on it, just so she could get out of the house.

She has company. Baja Californians have been turning to the remote, natural wonders of the state, whether they seek the isolated white-sand beaches and natural pools of Bahía de los Angeles or one of the state’s recently snow-dusted mountain ranges.

It’s a trend Mexico and Baja California officials have embraced by certifying certain trails — installing maps at trailheads, gathering information online for hikers, and placing signs throughout those trails to let users know if they are on the right path.

The effort is part of Mexico’s efforts to promote ecotourism and adventure.

Baja California has the most certified, marked hikes of any state in Mexico, according to state officials, with 12 certified trails, from the national park Sierra de San Pedro Mártir in Ensenada to Rosarito to Mexicali.

The state is also in the process of certifying what will be the longest hike in Latin America, running 68 miles across the state and along the ocean all the way to Baja California Sur.

Ojeda, her 24-year-old daughter and her best-friend headed out recently to the highest mountain in Rosarito. The Cerro El Coronel’s snaggle-tooth peak springs skyward 735 meters from rugged hills covered in chaparral. It is one of the 12 certified, marked hiking trails in Baja, located about 3.5 miles inland from the Pacific Ocean and Puerto Nuevo.

State officials have recently partnered with the company Baliza México to certify its hiking trails according to an internationally accepted system they say makes them safer and easier to navigate and enjoy.

“People want to escape the day-to-day,” said Mónica Véjar, executive director of Baliza México. “If we add in the pandemic, people have had even more to deal with, and they are looking for that escape.”

Véjar said her company works with the locals of the remote lands to be informal guides to hikers and offer water and restrooms.

“At first, some (locals) were asking, ‘Do we need to put in cabanas and restaurants?’ and we said ‘No, no, no. Water, restrooms and a trail-head,’ and that makes for a great hike,” she explained.

In addition to the certification process, the company is responsible for maintaining the trails, and geo-coding them to allow maps to show up on search sites like Google. They are working mostly in Baja but with plans to expand throughout Mexico. They have already certified two trails in the state of Tamaulipas, on Mexico’s eastern coast off the Gulf of Mexico.

Those signs were very useful to Ojeda and her companions. The precarious path leading to the El Coronel’s peak makes for a challenging — and in her case, much-needed — hike.

Because of work-related hand and back injuries, Ojeda didn’t make it all the way to the top, but she said the views were breathtaking anyway.

“You don’t need to go all the way up to take it all in,” she said. “You can just sit down and breathe and watch the view and it does a world of good.”

Since October Karla Vasquez has climbed Cerro El Coronel four times. She initially took up walking to lower her blood pressure, but found the peace of nature did more for her hypertension than the cardio. She said she liked that it was a safe, socially distanced activity.

“Everyone’s thinking right now about what they can do to improve their health,” said the 45-year-old Rosarito teacher. “Maybe this is one of the only good things to come out of the coronavirus, and maybe it will stick with us.”

“And the truth is we’re inviting the whole world,” said Dr. Ruben Roa, the state’s under-secretary of sustainable economy and tourism.

Roa said when international visitors come to Baja specifically for the purpose of hiking, they have an average stay of 10 days and spend on average at least $2,000. He also said every one in four visitors to the state partakes in at least one nature activity, whether it be paddle-boarding, kayaking, sand-boarding in Mexicali or surfing.

Highlighting the hiking opportunities in the state is an extension of a long-time movement to make tourists aware of other activities in Baja California beyond partying during Spring Break. That began with culinary tours, the craft beer boom and wineries in Valle de Guadalupe.

“The idea is to extend the experience … to compliment it,” said Roa. “In other words, we’re not closing off those other activities that are welcome, but I must admit that have exploited us for a long time, and did not allow for a recognition of the natural and pristine beauty of the state, especially in the southern portion of the state.”

Travel experts and Baja officials warned travelers to at least do their homework before heading out, especially if they have very little experience either in Mexico or with hiking. Emergency services will respond to the remote trails, but the teams are not as equipped to respond as quickly as a hiker might expect in the United States.

“Although these hikes can be safely done autonomously with the signs that the trails have, we do recommend that they be done in a guided way,” said Fernando Toledo, Baja California’s director of tourism innovation and development. The state has list of accredited guides that Toledo said offer much more than just safety.

“They will interpret for you by pointing out what flora and fauna is on that site. Apart from the views and the physical activity, they can tell you what the legends are of those places, and why they are named what they are named,” he said. “You can learn about the first communities that inhabited this part of the territory, like the Kumeyaay, which are cultures that are thousands of years old … and make the visit that much more memorable.”